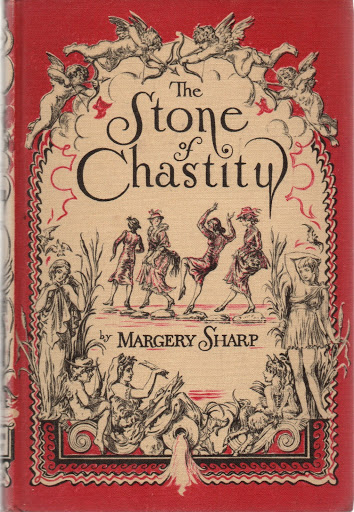 Back in November of 2013 (it doesn't seem possible that it's been so long), well before I ever dreamed I'd be doing anything more than fantasizing about publishing, I did a post here listing 20 books I felt should be in print but weren't. The post is hopelessly outdated now, and I can very proudly and happily say that it's partly outdated because of me. As of January, when our next batch of Furrowed Middlebrow books are released by Dean Street Press, I will have been responsible for no fewer than eight of those 20 titles being reissued (and it's just possible that I'm not finished yet). Of the remaining 12, at least five more have now been reprinted by other publishers.

And one of my favorites of all of these is undoubtedly Margery Sharp's delightful 1940 novel The Stone of Chastity. Sharp wrote lots of wonderful books, and I've written about a number of them here. I'm pleased as punch, as I've already noted here, that we're publishing six of her criminally neglected early novels in January, but Stone holds a special place in my heart as perhaps the daftest and most purely joyful and silly of all of Sharp's work, and it's truly bizarre that it hasn't been reprinted long before now. In 2018 in the New York Times, scholar and author Perri Klass named Stone, along with better-known Sharp classics Cluny Brown, The Eye of Love, Britannia Mews, and The Nutmeg Tree, as the five titles in her Sharp "starter kit", calling it a "bucolic comic masterpiece." I can't disagree!

The novel opens with Professor Isaac Pounce, freshly arrived in the idyllic country village of Gillenham, along with his sister-in-law, his young nephew Nicholas, and Carmen, his voluptuous assistant, who seems quite well-paid for doing no one is quite sure exactly what. The Professor is in hot pursuit of a legendary Stone of Chastity, reference to which he has stumbled across in an old diary. The stone was one of those placed as stepping stones in the local stream, and the legend went that no unvirtuous woman could cross the stream without losing her balance at this particular stone and getting a dowsing. 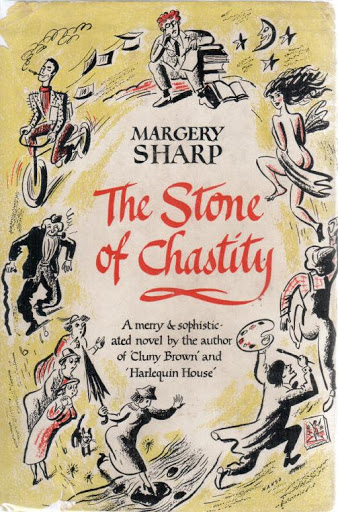 Professor Pounce is cold-bloodedly scientific in his approach, but his researches, including a survey distributed to all villagers and a plan to put all the village women to the test and record the results for posterity, arouses not unforeseeably hostility among the more pious-minded locals, particularly the Vicar's wife, who enlists the Boy Scouts to help suppress his efforts, and stern Mrs. Pye, a moralizer who might have given Savonarola a run for his money.

Ultimately, it's aimless young Nicholas, popular at Cambridge but without much ambition since, who must attempt to assuage the villagers' outrage. In the process, his own amorous impulses get directed first in the direction of Carmen, who when not helping his uncle works as a nude model for artists, then toward the Vicar's perky daughter, and finally toward a Bloomsbury composer staying in the village, who enthusiastically volunteers for the Professor's study. We also meet numerous other villagers, both in favor of the professor and against him, though my favorite by far is the unflappable Mrs. Jim, who runs the local pub and commiserates with Nicholas after he sours on the promiscuous Carmen:

"As a matter of fact, I suppose I was a bit of an ass about her…"

Mrs. Jim looked at him kindly.

"Like stealing jam, ain't it? You feel a bit sickish afterwards."

"Especially," finished Mrs. Jim, "when there's so many others have had their fingers in the same pot." Nicholas felt slightly sick in truth.

"You don't know how you could have done it," he said, "afterwards, when you wish you hadn't."

"I shouldn't let it worry you," said Mrs. Jim. "I don't suppose it was more than kissing behind doors, and where there's a door handy and a piece like her behind, no young man's to be blamed. Jam's jam."

Of course, the entire concept of women's chastity and society's concern for it is a profoundly misogynistic one, but have no fear, as Sharp has tongue firmly in cheek throughout, and by the end of the novel manages to delightfully undercut the whole concept. One would expect no less.

Although it's complete coincidence that I got round to writing about the two novels in this post at the same time, it's an interesting juxtaposition, for while The Stone of Chastity is probably Sharp's most pure farce, with nary a thing to take seriously from beginning to end, Four Gardens is probably the most restrained and emotional work of Sharp's early career. So get ready to switch gears…

The old names still echoed in her ears, drawing her thoughts back and back, past Lily and Leonard, past Henry, to even shadowier figures yet. Cousin Maggie Platt, who had money in Consols; Ellen Taylor, so fortunately an orphan; and Vincent in the terraced garden, and her own widowed mother, with that striking resemblance (though from the back view only) to Alexandra Princess of Wales…

As Four Gardens opens, we meet happy middle-aged Caroline Smith (née Chase), receiving birthday presents from her children, Lily and Leonard, and her devoted husband Henry. Her reflections on their gifts lead her to reflections about her earlier life, and soon we are back in the village of Morton as young Caroline and her widowed mother make their way towards an evening church service. However, not unusually, we are given to understand, Caroline hesitates and her mother asks her if perhaps she has a headache and should take a walk around the common rather than attend services. Caroline acquiesces, but instead of the common, she makes off to an abandoned house and garden which has caught her imagination. She has a passion and instinct for gardening and a love of the earth. 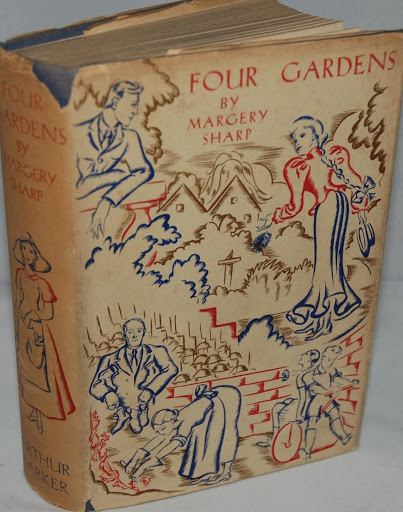 This lush but neglected and overgrown garden is the first of the four gardens which represent the stages of Caroline's life. This one, along with the young man she meets there, who awakens her romantic feelings but is ultimately of too high a class for her (this is Victorian England, after all!), represents perhaps her naïve, youthful dreams of simple happy endings. Instead, Caroline's life moves ahead, and she marries Henry Smith, who is devoted to her and whom she loves but is not in love with, an ambitious shoe factory assistant. They settle into a quiet little house, have two children, and make their way contentedly, despite the lack of anything more than a tiny garden, which Caroline at any rate has little time to think of.

Of course, ambitious Henry makes good, particularly with the arrival of World War I and the resulting increased demand for boots. Their fortunes rise, and soon Caroline has a much larger home with a lavish garden—this one too large to manage without a gardener, who takes charge of it all and ignores Caroline's suggestions and advice, thereby depriving even such lushness of any deep pleasure for her. She's now in the realm of keeping up appearances and moving in "Society", however uncomfortably. One of the funniest passages in this distinctly un-riotous Sharp novel is that in which Caroline goes to view the house Henry has selected for them, complete with its imposingly regal departing owner:

She announced herself, rather self-consciously, as Mrs. Henry Smith, and he replied that Mrs. Cornwallis was expecting her. To Caroline, following him through a wide shabby hall, the whole episode was beginning to feel like a nightmare. She was intensely conscious of herself-of her dress, her voice, the way she placed her feet. She felt like a cook-general going to be interviewed.

It's hard to imagine that the butler was really contemptuous (or at least that he revealed it in his manner of speaking) but of course it's dead on that Caroline, feeling awkward and out of place, would have perceived that he was.

I can't say anything much about Caroline's fourth garden because I don't want to give away the ups and downs of her story once the flashbacks are through. But suffice it to say it may be the most satisfying of all.

Four Gardens is by far the most sentimental of the Margery Sharp novels I've read, and I have a troubled relationship with sentimentality. But Caroline is such a charmer, tough and sensible beneath her rather passive and insecure exterior, that it was impossible to resist, and I have to confess to having tears in my eyes at more than scene (don't tell anyone). She is anything but a feminist, assuming along with her mother that her husband must always be right, but we do see a progression in her as the story progresses, and her attitude toward Leon and Lal when they are grown and romance in the air shows a plucky openmindedness. It's in these young characters, with their modern attitudes and bohemian sensibilities coming into gentle conflict with Caroline, that we get a taste, in later sections of the book, of more typical Margery Sharp storytelling and a bit of her usual comic relief.

There's also a lovely, balanced summing-up of Morton's reactions to the outbreak of war:

On August the fifth a booking-clerk at Morton Station, leaving his post to distribute cigarettes among a trainload of Territorials, was arrested as a spy and marched off to the police station. A troop of Boy Scouts, guarding the railway bridge, arrested an ex-colonel and one of the linesmen. An elderly stockbroker, flying a kite for his son on Morton Common, was arrested on the charge of signaling to the enemy. The German Charcuterie, owned by a Welshman named Evans, had its windows broken and its stock scattered in the street.

Also on August the fifth the local M.P. and his wife moved out of their house on the Common and handed it over for the use of the Red Cross. Dr. French threw up a now flourishing practice to join the R.A.M.C. Mr. Brodie, the estate-agent, who was forty-five if a day, enlisted in the London Scottish. The youngest Macbeth boy enlisted as a private. Every shop in the High Street was out of khaki wool. A first collection for Belgian refugees brought in seven thousand five hundred and eighty pounds. In this manner—in these manners—Morton confronted the fact of war.

As I mentioned in my announcement post, two of my fellow bloggers have also written enthusiastically, several years ago (I'm late to the party as usual), about Four Gardens—Barb at Leaves and Pages here, and Jane at Fleur in Her World (now at Beyond Eden Rock) here.

So there, two quite different sides of Margery Sharp, both from the first third or so of her career, but both quite delightful and informed by Sharp's incomparable instincts as a storyteller!

Posted by Furrowed Middlebrow at 6:18 AM