A vanishingly rare pleasure: MOLLY CLAVERING (writing as B. MOLLETT), Susan Settles Down (1936) 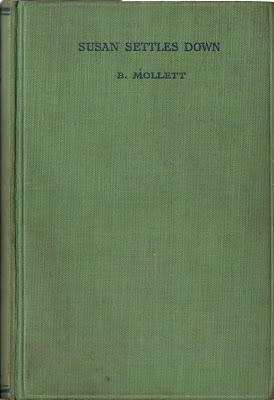 A few years back I wrote a fairly extensive post about Molly Clavering's writings (see here), compiling lots of details kindly provided by one of her cousins. I also wrote about two of her novels—the best known, Mrs Lorimer's Family here, and, a bit later, Near Neighbours here, the latter again thanks to said cousin. Happily, Near Neighbours was reprinted by Greyladies not long after. Then, predictably, I wrote no more about her, because most of her novels, and most especially the early works from the 1920s and 1930s, are simply impossible to track down if you're not in a reading room at the British Library or the Scottish National Library. They just do not come up for sale. Ever. Anywhere.

Except, apparently, this past December, when a random e-Bay search provided me with this treasure, one of four titles Clavering published in the 1930s under the pseudonym B. Mollett (see the first post linked above for more details about her complete bibliography and other pseudonyms). Easily my luckiest find of the year. I felt like I'd unearthed a vein of platinum while strolling through the park. And although it wasn't exactly cheap, it was also not the most expensive book purchase I've ever made. And happily, it was well worth the investment.

Many D. E. Stevenson fans will recall that Clavering was, in later years at least, a friend and neighbor of DES's in Moffat, Scotland. And those who have read Near Neighbours or Mrs Lorimer's Family (originally Mrs Lorimer's Quiet Summer in the UK, but the US edition was chosen by the "People's Book Club", operated by Sears-Robuck, so copies of that edition abound) know that her style has some things in common with DES's—a predilection for Scottish settings, often lightly humorous tales involving families and friends and at least a touch of romance. But I've learned from experience that comparisons to better-known authors often do considerable injustice to their lesser-known cohorts, and that might be particularly true in Clavering's case, since she had already published several novels before DES got properly started (leaving aside—as most fans are willing or even eager to do—the early Peter West). 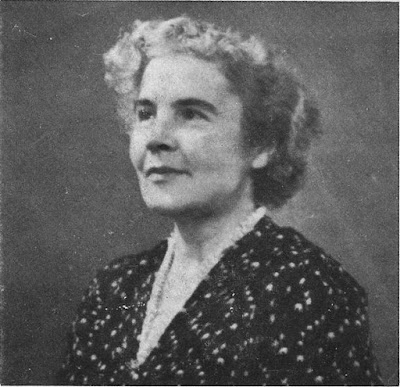 As Susan Settles Down opens, the titular Susan Parsons has relocated from England with her unmarried brother Oliver to a new home in the Scottish Highlands. Oliver has inherited the house and its accompanying property, and rather than selling it off they've decided to move in. Susan writes to a friend:

"Don't, please, write and tell me that we're mad. I know it already; and even if I didn't, every friend we possess has pointed it out. My spirit is quailing at the prospect of life at Easter Hartrigg, because I know what pitiful figures we shall cut as landowners in a country quite strange to us. Oliver talks blithely of shooting and fishing, and has told me to buy a smelly Harris-tweed suit and clumping brogues and a walking-stick, but these outward semblances won't make country-dwellers out of us. I feel just as the children of Israel must have felt when Moses dragged them into the uncharted perils of the wilderness out of the land of Egypt—a place in which, however unpleasant their lot, they were at least at home!"

The neighbors are welcoming enough, including the local vicar, Mr. Cunningham, and his family, and Jed Armstrong, who "marches with" the Parsons:

"My name's Armstrong. I march with you."

"Oh ... why?" was all that Susan could find to say in reply. Was this some Scottish form of leave-taking ? Apparently not.

"Why?" he stared at her; then a slow smile began to spread over his wind- and weather-beaten countenance. Looking down at Susan who, a tall young woman,  was accustomed to meet the eyes of most men on a level, he explained with an indulgent grin: "I have the place next to Easter Hartrigg."

But things are nevertheless a bit bumpy at first, particularly with a rather disagreeable cook, who rejoices in the name Mrs Bald, and her nincompoop daughter Bernice as their only domestic help:

"I've sometimes wondered," Susan wrote later to Charles Crawley, "how the principals in a Greek tragedy felt towards the messenger who is always popping in with tidings of fresh woe. Now I think I know. If the messenger wore the look of half-terrified delight in bad news which is plainly to be seen in Bernice's protruding eyes, death, instant and painful, would have been his portion. In fact, I really believe that only the lack of a handy weapon prevented me from killing her on the drawing-room hearthrug!"

But, in part due to their growing friendships with Peggy Cunningham and Jed Armstrong, things begin to smooth over after a time, they become involved with local dramas, and of course a bit of romance seeps into the story. And what would a village story be without the judgy local gossips, in this case the three spinster Pringle sisters, whose pompous belief in their own superiority and eagerness to find dirt on their neighbors let them in for dislike and occasional mockery, including regarding their chosen means of conveyance:

A small governess-cart had come into sight over the nearest rise, drawn by a donkey which appeared to have some difficulty in keeping its fore-feet on the ground.

"They'll have that miserable brute going on two legs soon," growled Mr. Armstrong. "And it wouldn't look as much of a donkey as they do, anyway."

There's nothing really remarkable about Clavering's tale, and great literature it certainly ain't. But entertaining it certainly is, and the setting is vividly evoked, the characters entertaining if unsurprising, and the tone pleasantly vibrant and spiced with humour. And for all that Susan Settles Down might sound just the kind of story DES might have written, I'm actually rather delighted to have Clavering's version, which I bet is a bit rowdier and rougher-around-the-edges than DES's would have been. 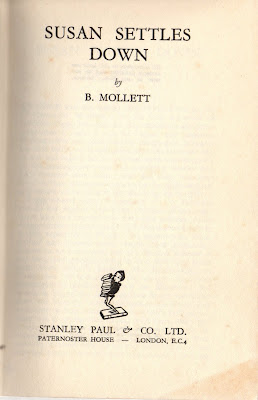 I might put it that I'd be delighted to be friends and neighbors with both women, but I rather think I might choose DES for kind, upbeat, heart-to-heart talks and Molly for those times when one feels like hitting the pub and being snarky and whinging about all that's wrong with one's life. Both essential functions for friends to serve. And I feel I can almost see how the dynamic between the two might have gone, with Molly perhaps loosening DES up and making her blush now and again and DES keeping Molly from becoming too disreputable. It must have been a happy mix.

Naturally, this book is even more impossible to lay hands on than most that I write about, but I thought as there is no information about it online I might as well share a bit. Happily, the inimitable Grant Hurlock is making it possible for me to lay hands on three more of Clavering's 1950s novels, about which I am ecstatic and thankful. If only it were possible to get hold of more, it's not out of the question that she would be a fun author to reprint, but alas it's not looking terribly likely. If anyone has any one or more of her other novels and would be willing to lend them, do let me know!

Meanwhile, my reading of this one just makes the others more tantalizing. Which is the way it always works, isn't it?
Posted by Furrowed Middlebrow at 8:33 AM