Hope you're all having lovely holidays doing whatever constitutes a lovely holiday for you! After a festive Thanksgiving with Andy's family in San Diego, Andy and I spent a delightfully mellow Christmas at home reading, snoozing, watching Shetland, and working a jigsaw puzzle of our next big trip destination, Spain. As we're nearly finished with this puzzle, we also have a Scotland puzzle to dive into, so here's hoping a Scotland trip will also be on the horizon soon!

Around New Year's I will, as usual, be posting my Furrowed Middlebrow Dozen for the year. But in the meantime, I'm catching up with two more books from my recent reading, both highly enjoyable in very different ways. 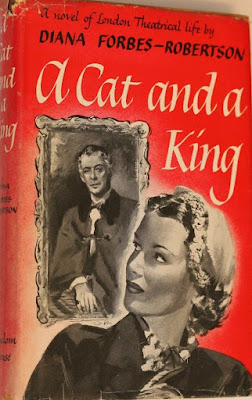 I don't even recall for sure why I had flagged DIANA FORBES-ROBERTSON's A Cat and a King (1949) as a priority to read, but I'm happy I did. It's certainly nothing we haven't seen and read before—young woman starting out in life meets middle-aged superstar stage actor, gets a job at the theatre, is pulled into the dramas of his family's life, becomes hopelessly enamored of him, and winds up a saddened but stronger and wiser heroine in the end. Dodie Smith might well have written it, though Forbes-Robertson has the advantage of coming from a well-known acting dynasty herself, so she certainly knows whereof she speaks. Her parents were actors Johnston and Gertrude Forbes-Robertson, her aunt was Maxine Elliott—of whom she wrote a memoir, Maxine [1964, aka My Aunt Maxine]—and her sister was Jean Forbes-Robertson, who played Peter Pan on the London stage and wrote a children's book. Another aunt, Frances Forbes-Robertson, was a novelist, and she and Jean are both also on my author list.

Even though there's not a lot to surprise the reader here, however, it's all done quite charmingly and I found it hard to put down. Gill, sitting in a pub with her shiftless boyfriend Oliver, recognizes young actor Jonathan Gregory very much the worse for alcohol and arguing with the bartender who doesn't want to continue serving him:

"You see, I've been working all day with the greatest actor since Garrick and the strain's got me, and I need my drink. He's been teaching me all about it. It's wonderful how lucky I am to get all that expert advice."

As you'll have guessed, the "greatest actor since Garrick" is Jonathan's own father, Luke Gregory, who has proven to be too much for Jonathan to live up to. Gill, against Oliver's arguments, takes time to chat with him and let him vent, then agrees to see a more or less unconscious Jonathan home in a taxi. And of course, once he's safely tucked up, Luke asks Gill to have coffee with him as a thank you, and then, because it's so late and she has missed her last train, he provides her with an elegant bedroom for the night.

I don't think that I'm any more overly impressed with celebrities than most people. I could probably meet all but my most passionately loved celebrities without doing anything more embarrassing than falling down a time or two, knocking over a table, or making incoherent attempts at humor until they call security… But it was nevertheless very difficult not to be seduced by Gill's inadvertent advent into Luke's glamorous orbit. The next morning over breakfast, she meets Luke's wife, and makes all the arrogant assumptions of youth:

Luke Gregory rose to his feet and went to meet her, taking her hand loosely and kissing her lightly on the cheek. With some ceremony he presented me to her, Mrs. Gregory, his wife, and I had to check the cry of protest that wanted to rise in my throat. How could she be his wife? She might have been his mother and yet that did not fit either because she was more like a woman from some quite different world. His vigour seemed to blot her out and as he placed her in her chair at the end of the table she appeared drained of strength.

Luke does help her rid herself of Oliver once and for all by telling her, "Don't be a fool, girl; don't be any man's doormat." But she has more difficulty applying that same wisdom to her relationship with Luke himself. Later, a journalist friend, Nick Carradine, warns her of getting too close to Luke:

"You see he'd always elude you and that's pretty heart-breaking. It'd be like one of the myths or fairytales ... lady loves statue, or lady loves merman, or lady loves half-god-half-man. It always ends in trouble for the lady. I'm getting to think that he's a case of split personality, but he's living one half of the split, the unreal half, so hard that the other is sunk deep down far enough to be beyond the touch of anyone by now, except possibly himself. The performance is pretty perfect by now. The unreal has become real, and if you start coming at him with a real snarling emotion it'll be you that'll get hurt."

"Well, there isn't any question of it, anyway," I said lightly.

But of course, there is, and Nick's predictions come true, as we know from the beginning that they will. It really is all great fun, however, smoothly written and hard to put down. A Cat and a King is, alas, Forbes-Robertson's only novel, but she did collaborate on The Battle of Waterloo Road (1941), in which her narrative of the Blitz and its effects on the people of working-class Lambeth is accompanied by the photographs of Robert Capa, and she also wrote one theatre-related children's book, Footlights for Jean (1963).

Footsteps in the Night (1927) by CICELY FRASER-SIMSON has also been on my TBR list for ages. A Bookman review of it said:

Mrs. Fraser-Simson has drawn real and likeable characters who behave and speak with a delightful naturalness, often very amusingly, and the strength of her plot depends on the fact that the happenings are probable and the explanations perfectly convincing. For this reason the book is much more exciting than the average one of its kind, and to say that you cannot put it down until you have read every word of it is, in this instance, no exaggeration. 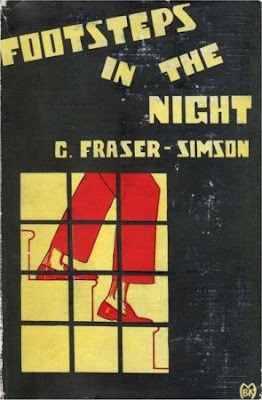 I don't know if I would put it quite so strongly—I'm sure I must have put it down a couple of times, and I'm not sure most readers would find it all entirely plausible—but it was certainly fun and no one is likely to care if it stretches credibility a bit. It's a bit like a lighter, more frivolous John Buchan adventure, featuring a likeable husband and wife in entertaining intrigue surrounding some top secret documents the husband, Peter, has for some reason brought with them on vacation to Scotland and then, through a series of mischances, left there with wife Eve as he heads to London for a crucial meeting. If the papers aren't there for the meeting, his career will be ruined, but a rival has decided to make sure of just that.

Peter is kidnapped, and when the kidnappers fail to find the papers with him, a shady character named Creason shows up at Eve's door. He bears a note from Peter asking that she let Creason stay with her for a short holiday, but Peter has cleverly included a subtle warning in his note, which tells Eve he's not really a friend. Creason keeps close tabs on Eve while she behaves as if nothing is wrong, and one of the high points of the novel is when he insists on accompanying her on her shopping and she exacts her own subtle revenge:

They spent a long, to Creason a very long, morning, during which Eve had a mild revenge. She left the car in the main street in her usual place, where all the shops knew it would be, and so generally sent their parcels out to it. But today, finding Creason meant to follow her from shop to shop, she waited for each parcel, and these he had to carry.

With a sirloin under one arm, two bottles of whiskey under the other, a parcel of fish—mostly kippers, to judge from the smell—in his hand, and another of butter hanging from one of his fingers, he cut a sorry figure. And Eve at length, repressing her merriment with difficulty, led him back to the car and let him deposit his burdens. But this was not the end, for she now took him round to collect more.

His well-merited discomfort amused her so much that she purchased many more things than had been her original intention. All the odds and ends that had been left over from week to week she now remembered. A fishing-rod that had been sent to be repaired had to be fetched, likewise an inordinate amount of cartridges. She thought he was going to strike when she suddenly remembered two large new hampers were needed for sending game and vegetables down to them when they were in London.

Of course, everything comes right in the end, but there are some effectively suspenseful moments along the way, as well as a few more chuckles. Footsteps was Fraser-Simson's first novel, and was followed by four more novels—The Swinging Shutter (1927), Danger Follows (1929), Count the Hours (1940), and Another Spring (1953). After that, she turned to children's fiction and published several more books.
Posted by Furrowed Middlebrow at 1:29 PM