Mummies and pharoahs and suitors, oh my!: STELLA TENNYSON JESSE, Eve in Egypt (1929) 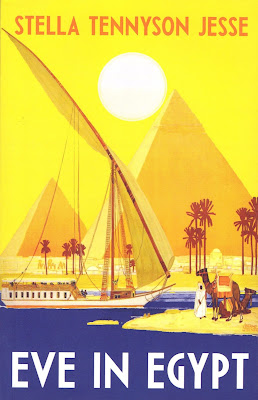 I added Stella Tennyson Jesse to my British Women Writers list years ago, but knew precious little about her. She was (fairly obviously from the name) the sister of the far better-known F. Tennyson Jesse, author of A Pin to See the Peepshow among others, but beyond that I knew only the name of her one book. We couldn't even verify for certain if that work was a novel or a travel book. Copies of the book were few and far between, so I had nearly resigned myself to never finding out more.

But that was reckoning without Michael Walmer, who recently emailed to offer a review copy of the newest reprint from his self-titled publishing endeavour. I rarely accept review copies from anyone, because I'm far too scatterbrained to focus on reading a certain book at a certain time, but obviously I had to make an exception for this one. And I'm glad I did, as Eve in Egypt turned out to be a delightful read, combining romance and travelogue, with a healthy amount of daft, cheerful dialogue thrown in. (It's also one of the most striking covers I've seen for awhile, so it's safe to judge this book by its cover.)

The nuisance was that so often just being natural and friendly seemed to do more harm than anything else! What a pity men were so terribly susceptible! The least little thing, and they seemed to be thrown off their balance. No stamina, Eve supposed.

The two proposals she has just received have created an awkward situation, such that Eve is happy to accept an invitation from her sister Serena, brother-in-law Hugh, and childhood friend Jeremy Vaughan to spend a few weeks exploring the Nile on a traditional dahabeah. Eve is happy to put a few thousand miles between herself and her suitors, but Jeremy's presence might just add new complications. Then there are two elegant, wealthy young Americans, Isobel Page, in whom Hugh shows an interest, and her brother Tony, who, Eve fears, might threaten her with yet another proposal:

It was hard enough to avoid getting engaged with a full moon at home. It must be next door to impossible with a desert and a sphinx thrown in.

There are relatively few surprises as to where it will all end up, but this is all to the good, as it allows the reader to enjoy the charming frolic and the luscious armchair travel. Considering that it's entirely possible that I'll never see the pyramids in person (the Middle East not going out of its way to make gay couples feel welcome—and then there's the heat and the sand…), it's lovely to get a first glimpse of them through Eve's eyes:

When Eve opened her eyes the next morning the words of the hotel manager swam up in her mind, and she jumped out of bed at once, slipped her feet into her little "mules," pulled on a silk wrapper and ran out on to the balcony. The sun was shining, though it was still too early for any warmth to be in its rays, and the Nile, which last night had looked so dark and mysterious, was now a pale greenish-brown, sparkling with a myriad little ripples in the bright light. The palm trees on the further bank now showed themselves to be a large plantation, and a tall minaret reared its graceful head from amid the plumy green. So great was Eve's sense of anticipation that it was almost with an effort she turned her eyes southward. She looked—and for a moment she caught her breath with the wonder of what she saw. There they were—three dark, mysterious peaks rising out of the thick cloud of mist that still floated over the land, with something remote, almost stark, about their definite shapes, so arrogant in their immutability.

I'm not sure I mind that I likely won't be riding a camel any time soon, but Eve's several encounters with increasingly contemptuous camels are tremendous fun (though I don't think camels can match their cousins the llamas for sheer haughty disdain). Here's a snippet of Eve's first camel ride:

She could only set her teeth firmly as her animal started to unfold itself in snarling sections. How she stuck on as it rocked and heaved beneath her she never knew. Fortunately, she was unaware that Jeremy had taken a cinema of the proceedings. Anyhow, here she was at last, incredibly high up in the air, clinging like grim death to the inadequate little brass tube that stuck up in front of the saddle, her hat tilted over her nose, her cheeks flushed with emotion and exertion; shaken, agitated, terrified, but still alive.

On a few occasions, the pace of the novel slows a bit to allow for discussion of Egyptian history and customs, and while this is perhaps a slight weakness in a novel, I found it useful and interesting in a work of armchair travel. I may have learned more from this book than from any history course in school (though, sadly, I will likely forget most of it within a week or two…). 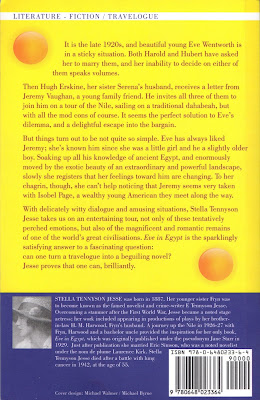 One of the things we gain from travel, of course (and the reason that a good many insular Americans—and perhaps some Brits?—should be sent immediately on extensive international travels), is more extensive self-knowledge. I liked Eve's observations on the differences between Americans and Brits while traveling:

I have to say that wasn't our impression of ever-helpful, ever-friendly Brits during our trips there, but perhaps it's just that they've loosened up since 1929? For that matter, I'm not sure Americans are very friendly and outgoing when traveling these days (even before our president made many of us want to pretend to be Canadian).

Eve in Egypt is great, perky fun for anyone interested in Egypt or in travel narrative more generally, or in cheerful, ditzy romance. My thanks to Michael Walmer for retrieving the book from obscurity and for sending a copy along!
Posted by Furrowed Middlebrow at 5:20 AM