Yes, this post was indeed supposed to happen over the weekend, but through circumstances beyond my control (well, being absent-minded certainly seems to be beyond my control), it's only appearing now!

The look behind the scenes and the pics from before the sale started were fun (see here if you missed it), but let's be real—the books themselves are what we all care about. So here's the whole mess I brought home: 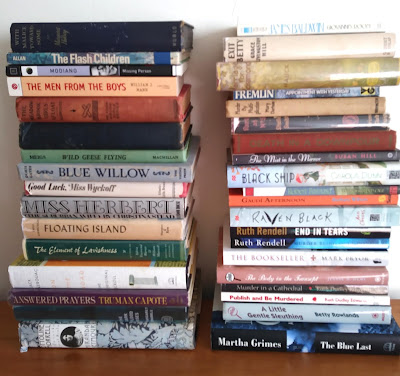 As I mentioned last time, not quite such a haul as last year (thank heavens, really!), but still great fun, and first off, I have to share two lovely books that I'm including with the sale books but that were really lovely gifts from Deborah, who does the wonderful Book Barmy blog. Have a look: 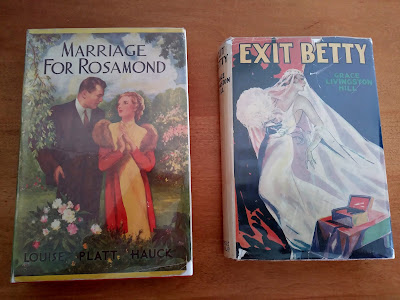 Both GRACE LIVINGSTON HILL and LOUISE PLATT HAUCK will belong on my American Women Writers list (if I ever get back around to that), and both books look like great fun. And the dustjackets are to die for (I will fetishize them some more for you when I've read them). Thanks so much, Deborah, for making book sale day even brighter and more exciting than usual!

At the book sale itself, there weren't actually a large number of really exceptional finds, but rather late in the sale, I happened to glance at one of the boxes under a table and see a suspiciously old hardcover, with two more dusty old books under it. And lo and behold! 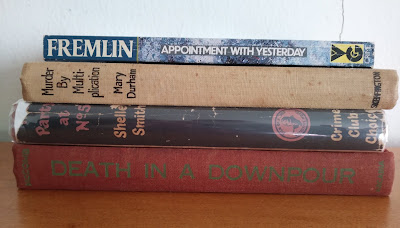 Two of these three are by authors on my list. The book with a dustjacket, of course, is a SHELLEY SMITH novel, one of several of her novels to have been released in e-book in the past couple of years. I have at least one other Shelley Smith novel on my shelves, languishing unread, but how could I pass up a dustjacketed copy?

The second of the books is more obscure and therefore right up my alley. MARY DURHAM wrote eleven mysteries in the 1940s and 1950s, about which little information has been available, so I'm delighted to have the chance to read one!

And the third might be the most obscure of all, since I can find little about its author, KATHERINE MCCOMB, except that she wrote at least a couple of other mysteries and a few romances. The Library of Congress only lists two of her titles, not including this one, Death in a Downpour, published in 1960. Is it a great lost treasure? Well, probably not, but you never know!

Then, shortly after, I came across the CELIA FREMLIN paperback. I've always meant to read The Hours Before Dawn, her most famous novel. I didn't find that one, but Appointment with Yesterday seems to have been well-received too. She's apparently more suspense than mystery, which may or may not work for me, but it should be interesting.

I also picked up a couple of other books specifically relevant to or of significant interest for this blog:

The first—MARGARET HALSEY's With Malice Toward Some—is really also thanks to Deborah, who pointed it out to me when we chatted during the sale. I've been meaning to read Halsey's humorous book about travelling in the U.K., and now I have no excuse not to (except the two thousand or so other books on my TBR list!).

This year, as always, Andy was with me at the sale and had his list of authors to be on the lookout for. I've never thought to put MABEL ESTHER ALLAN on his list before, but I've been reading a fair amount of her this year, and some of her later works in particular seem to have had success in the U.S., so I thought why not? I didn't really expect him to find anything, but I underestimated him. The Flash Children, the beginning of one of Allan's late series for younger readers, wasn't my highest priority (why couldn't Lost Lorrenden or Glenvara or another of her vanishingly rare titles from the 1950s have just happened to turn up?), but I'm happy enough to get to sample her later work. 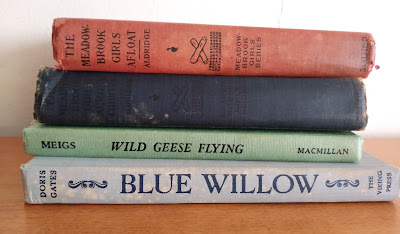 And while Andy was perusing the children's section, he also picked up a few other older books, all American, that he thought might appeal to me. I had to Google DORIS GATES' Blue Willow, but one look at a reference to it as a Grapes of Wrath for young readers made clear I'd have to give it a try. I know I've also come across CORNELIA MEIGS before, though I can't recall how or in what context. Wild Geese Flying isn't one of her best-known works, it seems, but I was intrigued enough to give it a try.

The two JANET ALDRIDGE books are new to me and pretty bedraggled. What little I can find out about the Meadow-Brook Girls series suggests they could easily go either way—great fun or purely dreadful—but I knew I needed to peruse them a bit more. 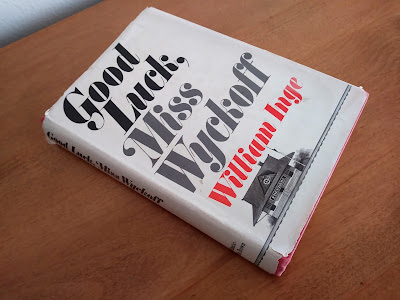 Now, ordinarily, a beat-up copy of a WILLIAM INGE novel wouldn't seem like a "find" in particular. Inge, as some Americans and probably very few Brits will know, was primarily known as a playwright—author of Picnic (for which he won the Pulitzer Prize), Bus Stop, and Come Back, Little Sheba, all of which were probably more widely known for their film versions than for the plays they were based on. He also won an Oscar for his screenplay of Splendour in the Grass. He's not known particularly for his fiction, which consisted of only two novels. Good Luck, Miss Wyckoff was the first, about a high school teacher who has an affair with an African-American janitor, with many repercussions.

So what makes a copy of this novel, a little worse for wear despite being a first edition, something of a find? What about this?: 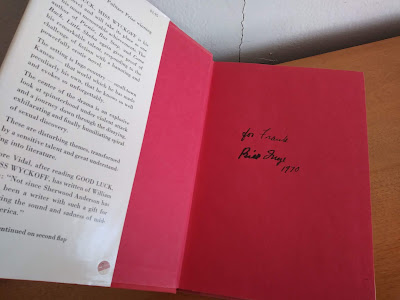 Too bad he lost control of his pen a bit and blotted the first name, but if you can't make it out, yes, it does say "Bill Inge." Which makes this the second vintage author inscription I've come across this year at library book sales—I've been meaning to post about the first for a while, so hopefully this will inspire me.

Then, a few more books that are perhaps very loosely related to the blog: 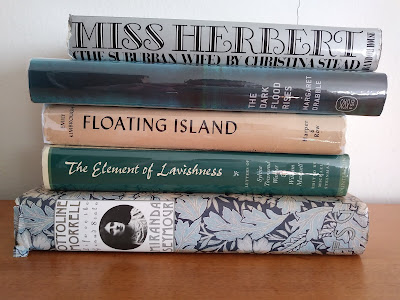 SYLVIA TOWNSEND WARNER is one of very few authors I might actually enjoy reading letters by and to, so The Element of Lavishness, including her correspondence with long-time friend and New Yorker fiction editor, was a nice acquisition. And I have an on-again/off-again love affair with Aussie CHRISTINA STEAD, so it's fun to have a nice-ish copy of one of her late novels, Miss Herbert, which I haven't yet read.

I have a real fondness for the rather quiet, low-key travel books of EMILY KIMBROUGH, and have read a number of them, but Floating Island is one of those I haven't read yet, so that's a nice find. And I have a peculiar fascination with Ottoline Morrell, a Bloomsbury figure and all-around eccentric, and actually had MIRANDA SEYMOUR's bio of her on my TBR list. And finally, although it's surely one of the bleakest books of the past year or so, based on the reviews I've come across, I already meant to read MARGARET DRABBLE's The Dark Flood Rises, and a pristine hardcover cover was too much to resist.

The biggest group of books from this year's sale are an array of contemporary (or at least more recent than my blog's period) mysteries, including several that are the first in their respective series, which is handy. None of these are rare or extraordinary, but it's always nice to stock up on relaxing reads at bargain prices. 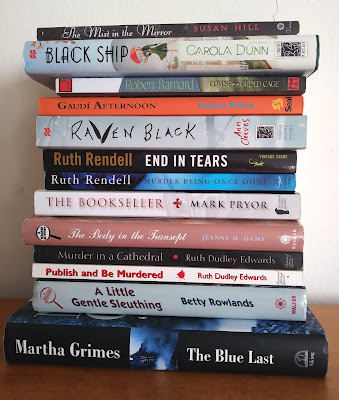 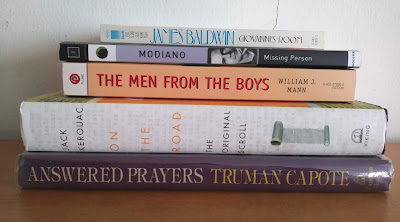 I've actually read the Capote, the Baldwin, and the Mann books before, but thought re-reads might be in order. I can't quite imagine what possessed me to buy the Kerouac—I think I bought it once before—but I did sort of like On the Road when I read it ages ago (probably at a more appropriate age, honestly, when I was young and restless), and thought if I re-read it it might as well be the more complete, less edited scroll version. I'll probably just donate it back in a few months, but who knows? And I meant to read some Patrick Modiano when he won the Nobel Prize a few years ago, and never did (of course), so Missing Person looked kind of intriguing.

And that's that. Certainly not a bad collection, though also certainly fewer really exciting finds than in previous years. I think the Friends have become much savvier about weeding out the best vintage titles to sell online for higher prices. Which is understandable and desirable from the perspective of raising money for the library. But I think it just might mean that the golden age of the Friends book sales is over. Still entirely worth attending, of course, but not quite the excitement that it used to be. Ah, well, all good things…
Posted by Furrowed Middlebrow at 7:37 PM