Oxford vs. Cambridge (sort of): DAISY NEUMANN/NEWMAN, Now That April's There (1944) 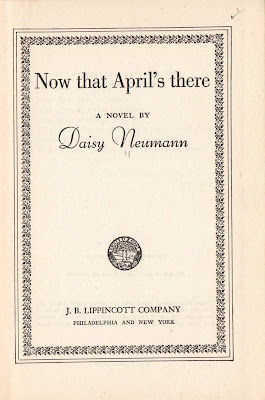 "Oh, there's Angus at the bottom of the platform," she exclaimed. "My little lad—how he's grown! But who is the lady with him carrying a violin-case? And where's Wincy? John, your eyes are stronger than mine. Where is Wincy?"

Wincy looked sideways at her mother. No, that wasn't the way she had expected her to look. The features were the same, but sharper, as though someone had put accenting lines into a drawing.

Now That April's There begins in early 1944, with the return of Angus and Wincy (Winifred) Turner to their parents in Oxford, following several years of evacuation to the U.S. They've had an extraordinarily happy time away, staying with the Hilliards ("Uncle Bill and Aunt Polly") in Belmont, Massachusetts, a small town outside of Cambridge (Oxford vs. Cambridge, get it?). Bill Hilliard was a professor at Harvard, as their father, John Turner, is at Oxford, though Uncle Bill's interest in child psychology and enjoyment of creative activities with the children sets him as much apart from Professor Turner's standoffish intellect as Aunt Polly's easygoing, affectionate nature sets her apart from the stiffer, chillier, and undoubtedly more exhausted Rachel Turner, who is often rushing around in aid of the W.V.S. and has traditional views of the behaviors of children. Thus, the changes in physical appearance made clear in the early passages, quoted above, turn out to be the tip of the iceberg of the efforts, by parents and children alike, to convert each other to the perspectives and behaviors each believe are correct.

Among other things, Wincy is now 15 and has come to consider herself more or less grown up, a position with which Rachel disagrees. She also shocks her parents with her outspokenness (Uncle Bill believed teenagers were old enough to express opinions about the world; the Turners beg to differ) and what might be called her "loose ways"—i.e. publicly hugging Hank, a young friend from Belmont who is now in the Army, when he pays a surprise visit to Oxford, and happily planning to go on the river alone with Francis Quelch, the teenage son of one of her father's colleagues. Meanwhile, 8-year-old Angus starts wetting his bed because of the anxiety of readjustment, which horrifies Rachel, who isn't exactly receptive to Wincy's psychology—particularly the suggestion that she doesn't make Angus feel that she loves him:

"English people of good taste do not display their emotions," Mrs. Turner said. Having settled the argument, she left the garden.

Needless to say, at first the balance clearly seems to tilt in favor of the American way of doing things, and in all fairness it probably stays at least a bit slanted in that direction. But it is also true that there is gradually something of a melding of cultures that leaves both a bit more nuanced and perhaps more suited to an England dramatically changed by the war.

Wincy's surprising liking for shy, idealistic Francis—despite his terrible, overbearing mother who is manipulating and manuevering to get her husband appointed the next Warden of St James's College—makes the more romantic bluster of Hank lose some of its shimmer. The practical skills that the children have learned from the Hilliards—helping prepare and clean up the meals, repairing ragged electronic devices that can't be replaced in wartime—come in very handy for their overworked mother and absentminded father. And even that slightly indecent, tackily American psychology Wincy is always going on about may have its professional uses for Professor Turner…

Neumann/Newman (the spelling of her name seems strangely variable—it's "Neumann" on the copy of the book that I read, but is usually given as "Newman" in online resources, so who knows how she herself actually spelled it?) was an American Quaker whose religion often informed her work. From what I've read about her, she had the reputation for being a bit preachy in her novels, of which Now That April's There was her first. 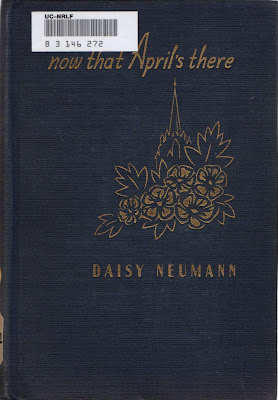 Another author I enjoy, Elfrida Vipont, also a Quaker, apparently has a similar reputation, though I don't find her so, but the two authors do have in common that all of their main characters are well-meaning and kind-hearted, perhaps a bit idealistically so. For the most part, I didn't find Now That April's There preachy either—with one glaring exception. Wincy becomes friends with the current Warden's daughter, and at one point asks her about whether Brits follow psychology at all. The response is too deliciously ludicrous not to quote:

"Well, no," Daphne said at length. "English people don't bother their heads about that sort of thing as a rule, though before the war, when there wasn't so much to do, some scientists did. But we don't have to worry much about complexes. We dispose of that sort of thing at birth."

Wincy looked up in astonishment. "At birth?" she asked, incredulously. "But how can one? I mean, one hasn't even got the complexes yet."

"Baptism," Daphne explained in her gentle voice, but not as though she were talking to a child. "Baptism rids people of original sin and leaves them free to go about the business of life. It's much more expedient than psycho-analysis. I understand it takes years to rid a person of complexes, and even then they may return."

It was a new idea, and quite good, Wincy considered. She wasn't sure. If only she could have learned more about psychology before she left America—she realized now that she didn't know enough to help in even a simple argument like this.

Now, it is certainly true that within the novel itself it is psychology, not baptism, that saves the day, so I'm not at all sure Neumann is speaking for herself when she presents Daphne's ridiculous viewpoint. But there's still the fact that Wincy considers the idea "quite good" rather than giggling uncontrollably or gazing at Daphne pityingly, but perhaps she's just too polite for that. At any rate, I didn't let this passage trip me up too much, and I had a wonderful time with the book overall. Plus, I found it an interesting portrayal of some of the issues resulting from long-term evacuation of children and therefore well worth reading.

I think this novel first hit my radar because someone on the D. E. Stevenson discussion list recommended it (ages ago, of course—it takes me forever to follow up on any lead). Which leads me to think that perhaps a few of you have actually read it? If so, what did you think? Preachy or entertaining?
Posted by Furrowed Middlebrow at 9:33 AM