I only finally wrote about Rumer Godden here back in February (wow, time flies), when I finally got round to reading the wonderful China Court. I've read a good many of her other books before I ever started blogging, so she had never turned up here, despite being one of my favorite authors. But recently, I finally turned to two of her books that I had never felt compelled to sample before. The first of these was also the first of Godden's dance-themed books that I've experienced.


I think I always imagined that, not being particularly interested in ballet, I would find her dance books less interesting or enjoyable than her other novels, but in fact I found Candle just as difficult to put down as any of her other books. If it's perhaps not, for me, absolutely in the top tier of Godden's novels, it's still very, very good. The aging Madame Holbein, once a great dancer herself, now a great teacher, can be added to the many inspiring women characters Godden created (I picture a film version, with a marvelous opportunity for an older actress—hmmmm, who should it be?), and the dynamic between her and the young dancers—her favorite, who is letting her ego get the best of her, and the brilliant student Madame resents, perhaps, for being too good—is fascinating. 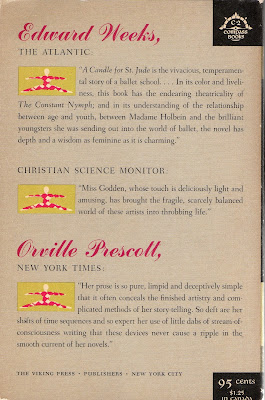 Of course, as much as anything, it's Godden's unique and compelling style that makes the book succeed. I love her description of the poor theatre dressmaker:

Miss Porteus wore a little hard black velvet pincushion pinned to the left breast of her dress in the shape of a heart. To her niece, Lollie, it seemed that it was Miss Porteus' heart, withered and worn, stuck with sharp pins. Madame would have added, "Filled with sawdust instead of good red blood," but that was too old a thought for Lollie, who worried about her aunt.

And then there's this passage, which evokes the passage of time that Godden explored so eloquently in A Fugue in Time and would again in China Court:

Tomorrow Archie would dart, every nerve alive in a tumultuous effort to please, his eyes hot and dry, his cheeks burning, his heart beating like a clapper with excitement. It happened again, in every season, with every performance, with each entrance of each dance. Time passes, that is what they say, but that is what it doesn't do, said Madame. In each one, with each one, Madame lived through it again. It left her exhausted, but that was why she lived.

After Candle, I went on and read a couple of other books, but Godden's siren song soon proved too strong. 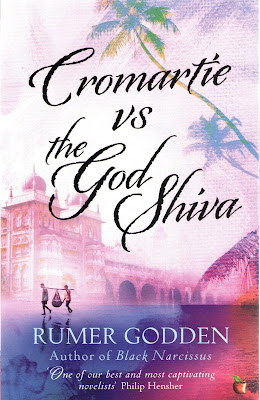 After enjoying Fugue and China Court so much, I had immediately placed an order for a couple more of the new-ish Virago editions of her work, so there was Cromartie vs. the God Shiva waiting patiently on my TBR shelf, seducing me into picking it up.

Cromartie was Godden's last book, published in 1997 (I hadn't quite registered that she published anything that late). It's set mostly in India where a young London attorney is investigating the background behind the theft of a valuable Hindu sculpture from a once-grand hotel, and is loosely based on a real case in which a similar sculpture was siezed by police as stolen as it was being examined in a museum. His resulting romance, and the details of his investigations, however, are pure fiction. 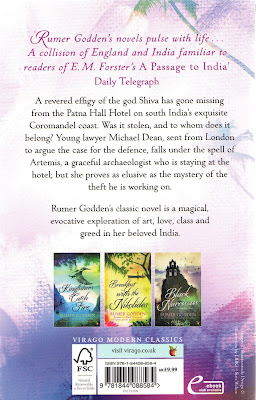 The book is enjoyable—it's hard for me to imagine anything by Godden not being that—and satisfying enough. It's just on a smaller, less complex scale than much of her earlier work, and therefore I suspect it won't linger in my memory for quite so long. But if you've exhausted most of Godden's work, and just can't bear not to have her humane, thoughtful authorial voice in your head yet again, Cromartie vs. the God Shiva may be just what the doctor ordered.
Posted by Furrowed Middlebrow at 6:11 AM