Any list that requires a complicated explanation is probably asking for trouble (and I've certainly analyzed and rationalized this one a bit too much for comfort). But I'm an incorrigible listmaker, so here I am, foolhardily rushing in where no angel would be caught dead. Following are the basics of what I've tried to accomplish here.

The seed for this list was planted by two comments left in the past few months on my much earlier (and rather neglected—it needs revising) "Not-Quite-So-Overwhelming List," which had attempted to narrow down my full list of nearly 2,000 British women writers to 70 or so of the most important, popular, and enjoyable—a starter kit, as it were. The commenters pointed out, however, that since those authors wrote lots of books, it could be helpful to someone thinking of reading, say, Barbara Pym for the first time if they knew a good place to start.

As I am nothing if not excessive, I immediately thought of a list of 100 novels—there being a plethora of previous lists of 100 books (there's a Modern Library list, a Time list, and a Guardian list, to name a few). Except that, unlike such lists, which I think are a little ridiculous but unavoidably addictive, my list is not intended to be a "best" list. Instead, my goal has been to create a good representation of the genres, themes, and styles of the British "feminine middlebrow" from the early to mid-20th century. Obviously, each individual novel's strength and enjoyability was a priority, but I also wanted, to the extent possible, for each title to open up other possible paths for readers to find other books to enjoy. Hence, the idea of calling it a "syllabus," since a class syllabus is intended as a starting point, as the tip of the proverbial iceberg.

I agonized a bit but ultimately excluded a few authors because their highly literary styles and ambitions make them less approachable and entertaining to general readers. Although Virginia Woolf's subject matter is often domestic, her style and execution are experimental and challenging, and for readers seeking an entertaining book to read or a glimpse of what domestic life was like in the mid 20th century, Woolf's novels are not, I feel, the best suggestions. Ditto with Dorothy Richardson, Iris Murdoch, Stevie Smith, Anna Kavan, and Mary Butts. Marvelous authors all, but not such good fits for this list.

On the other hand, I have included a few authors from traditionally "lowbrow" genres, such as mystery and romance, because there is undoubtedly a spillover of themes between the middlebrow and genre fiction. If Norah Lofts, for example, is usually dismissed as a mere writer of historical, romantic, and genre fiction, one will nevertheless find many of the pressing themes of middlebrow fiction in her work—women seeking independence and equality, houses and domesticity as very nearly characters in their own right, and so on. Ditto Georgette Heyer's romances, which though set in earlier periods undoubtedly explore the shifting gender roles of the 1940s and 1950s. And if part of the attraction of middlebrow fiction is the opportunity to delve into the domesticity of an earlier time and to get a feel for what day-to-day life was like, then mysteries—which of necessity focus on a detailed examination of their characters' routines, habits, and lifestyles—belong here as well. Particularly since a few mystery writers managed to create deservedly classic middlebrow novels in the guise of whodunits.

I relinquished, however, my plan of including a few children's titles as well (and a similarly good case could have been made for them). Ultimately, I felt that my own reading in that realm wasn't extensive enough to allow me to select the best representative titles. I'll let someone else take on that challenge.

Finally, although the earliest title dates from 1899 and the latest from 1974, all (with one worthy exception) of the authors included are from my Overwhelming List. Thus, they're British, and they all published at least some of their fiction in the years 1910 to 1960, the peak years of the feminine middlebrow (in fact only six of the novels fall outside those years).

Yes, of course it is. But I really have tried to base it on all of my research of the period, all the critical reading I've done, contemporary reviews, and all the work that fellow bloggers have done reporting on these books. I've included a fair number books I haven't read, and a few that I don't particularly like—in each case because I felt that the preponderance of opinion about the books outweighed my own ignorance or indifference.

HOW IS IT RANKED?

Originally I planned to have the list in alphabetical order. But that's a bit bland and boring, don't you think? Plus, I wanted to split the list into parts, so I have room to include comments and book covers without each post being too unwieldy (followed by full listings, in both alpha and chron order, once it's all done). Once I made that decision, it seemed that there would be a sort of built-in build-up with each successive post anyway, so I might as well run with it.

However, the ranking from 100 down to 1 is really rather random—except for two things. In the lower portions of the list, I placed both a few strays that were too significant not to include, even though they may not be the most purely enjoyable, and also a few of my quirkier selections, which may be little known and in some cases hard-to-find. At the other end of the spectrum, for the top 20 titles, I tried to make sure all 20 were real "heavy-hitters"—sort of undisputed classics of the genre. Apart from that, the ranking is based as much on having an interesting mix in each post as on any qualitative differences.

"WHAT WERE YOU THINKING?!"

My own perverse first impulse on confronting any list is to start poking around its edges to discover what the compiler has left out. I encourage those with similar mindsets to do the same thing here. No doubt you'll find some ghastly oversights.

Ultimately, my goal was to represent all the things the middlebrow can be—serious and silly, "important" and frivolous, romantic and realistic. Most readers won't love all the novels listed (I certainly don't), but if you can't find quite a few books to love on this list, as well as some new ones to explore, then I wash my hands of you!

And now, without further ado (finally!), here are the first ten titles:

When a novel's first line reads, "Eleven young Hebbertons lived to reach maturity," you know it's not going to be an entirely cheerful read, but this portrayal of Victorian family life, mentioned by Elaine Showalter in A Literature of Their Own, is richly detailed and completely convincing. Out of print and difficult to find second hand, but public domain. PDF available for free from Hathi Trust.

One of a handful of highly personal choices, and sadly difficult to find, but a funny tale of village life with a Pym-ian bite. In his review in the Telegraph, John Betjeman said, "Miss Buckmaster is an unbitter humorist. She is not afraid of death, birth and love. And yet the book remains funny. This is because it is true humour, which is seeing things in proportion." I reviewed the book here. Out of print.

The most famous novel by the author of the social history A Woman's Place 1910-1975 is a powerful portrait of Depression-era England through the eyes of a young schoolteacher. Cosy Books discussed the book here. Out of print but readily available second hand in the 1980s Virago edition.

Remembered now largely for her fling with Vita Sackville-West, and for being the daughter of Edward VII's mistress, Trefusis' novels might be ripe for rediscovery. Lorna Sage called this, her most famous work, ‘splendidly malicious commentary on England, and on the aristocratic culture that she'd escaped.’ Desperate Reader reviewed the book here. Out of print but fairly readily available in the 1980s Virago edition.

Reactions to this lesbian-themed adult school story, both at the time and more recently, are wildly varied, positive and negative, but it was certainly important and influential, and Radclyffe Hall herself was a fan. Public domain in the U.S., free e-book from Amazon or Gutenberg. In print in the U.K. Second hand copies of the 1980s Virago edition may also be found. 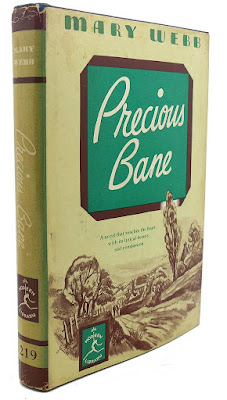 One of the authors Stella Gibbons had in mind when she wrote Cold Comfort Farm, Webb's fiction is distinctly Hardy-esque. Here, the heroine is born with a harelip which is both a blessing and a curse, isolating her from other villagers but also freeing her from the social expectations that other women face. The Book Binder's Daughter reviewed it here. In print from Virago in the UK, available in POD paperbacks and e-books of uncertain quality in the US, or second hand in various editions.

I could have selected any of several other Keane titles, but this one seems to have received consistently positive reviews (see Harriet Devine's here). Plus, it features a prime example of a terrible mother, a popular theme of the period. E-book edition available from Virago in the US. Second-hand Virago paperbacks readily available. 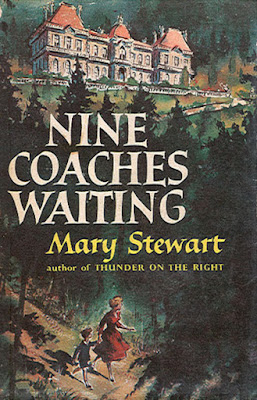 Considered one of the best of Stewart's romantic suspense novels, complete with exotic setting (a French chateau), a lovely young governess, a dastardly villain, and a budding romance. Leaves & Pages reviewed it here. In print from Chicago Review Press in the U.S. (paperback only) and Hodder in the U.K. (paperback and e-book).

A powerful portrayal of an elderly woman facing dementia in the dark days of the Blitz, as well as several other women servants and caregivers. Apparently based on the final days of novelist Violet Hunt. A bit dark but riveting, and perhaps one of the earliest and most empathetic attempts to portray the realities of age-related dementia. Available from Persephone.

Carmen Callil of Virago said of it that "its continuing charm lies in its quirky and enigmatic love story which becomes more beguiling with each re-reading." And Jilly Cooper called it "wonderfully sinister, so enchantingly written and so sad." This is one of the books on this list I feel bad for not being able to like, but I certainly bow to the consensus of smarter people. Dovegreyreader wrote sensitively about it here. In print from Virago.

The next section of the list will appear in a few days...
Posted by Furrowed Middlebrow at 5:46 AM