First and foremost, as this will be my last post before Christmas, I want to offer my wishes that all of you have marvelous festivities to celebrate the holiday. And by festivities, of course, I mean anything from huge family gatherings to wild orgiastic parties to quiet evenings with a good book and a cup of hot chocolate—as long as it makes you happy, that’s what I wish for you. And while this is my last post before Christmas, it is not my last post of the year. A little Christmas miracle of my own: I have already prepared my Furrowed Middlebrow Dozen for this year, and it will go up in timely fashion before New Year's, so I'll save my wishes about 2017 sucking less than 2016 has for that post...

My way of contributing to the holiday spirit (though admittedly a rather self-indulgent way) is to announce the second batch of Furrowed Middlebrow titles from Dean Street Press, which will be released in early March 2017. (I was originally planning to reverse these last two posts, but we had a near miss yesterday on some of the news getting "leaked," and I'm told by Dean Street some of the titles will be appearing on Amazon and other sites soon for pre-order, so I am pushing the announcement forward by a week or so.)

I actually had the astonishing experience this week of receiving an email out of the blue in which the writer said he'd heard rumors we were planning to reprint a certain book, which as it happens I have heard of but never actually read. I was sorry to disappoint him, but strangely pleased that I am actually involved in something that could inspire inaccurate rumors. Now I know how celebrities feel! But today I can put those rumors to rest, at least in regard to our next batch of titles.

Before I drag this out too long, I have to say one other thing. We have reluctantly decided that our previous plans of releasing three or even four batches of books per year was just a bit too ambitious. Putting the books together properly—carefully proofed, with good introductions, nice cover designs, and appropriate marketing—takes a bit of doing and it’s more realistic for us to release two batches per year. This means that, although it seems a terribly long time away, our third batch of titles is now set for September of 2017. Ugh. Sorry about that. On the other hand, we originally intended to do 6 or 8 titles per batch, but we stretched that to 9 in the first batch and will stretch it even further, to 11 titles (!), in batch 2. So ultimately we might end up doing almost the same number of titles per year as we had planned.

One rather nice thing that happened when I did those annoying multiple posts last time to announce the first titles (I'm not dragging it out that way this time, you'll be happy to learn) was that I got lots of comments and/or emails about what authors you hoped we would be doing. This was especially gratifying because one author got mentioned more than any other, and although it was a bit of a bummer that she wasn’t, in fact, part of batch 1, I now get the pleasure of announcing the she is part of batch 2.

Yes, our first three new titles are by Ursula Orange. We'll be reprinting Begin Again (1936), Tom Tiddler’s Ground (1941), and Company in the Evening (1944)—my three favorites of the ones I’ve read. (The links are to my original reviews of the books.) This will be, as far as I know, the first reprinting of any of Orange's work since its initial publication, which makes it even more exciting for me.

Some of you might have suspected that this was in the works when I mentioned meeting Orange’s daughter, author Gillian Tindall, while we were in London. That's where we snapped a photo (so-so at best) of the portrait of Ursula as a child, which hangs on Gillian's wall. If you look closely, you can see Andy reflected with his camera and, over his shoulder, Gillian standing behind him, which if not great photography nevertheless very pleasantly reminds me of our evening together.

And I wonder if you also suspected, then, that we would likewise be reprinting the one lovely novel by Gillian’s aunt (Orange's sister-in-law), Monica Tindall? The Late Mrs Prioleau (1946) will be our fourth new title. You may recall Gillian had recommended the novel to me, and I loved it so much that I'll be revisiting it next week for my Furrowed Middlebrow Dozen for 2016. 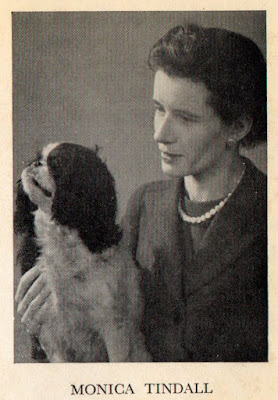 As it happens, we've already reprinted my #1 title from 2014's Furrowed Middlebrow Dozen—Winifred Peck's wonderful Bewildering Cares. And we have the Tindall (and perhaps one or two others) from the 2016 list. So what about 2015?

I’m happy to announce that we’ll also be releasing all six of Elizabeth Fair’s cheerful, witty comedies of village and small town life, including my 2015 #1 fave, A Winter Away (1957). I raved enthusiastically about all of them here. The other five novels are Bramton Wick (1952), Landscape in Sunlight (1953), The Native Heath (1954), Seaview House (1955), and The Mingham Air (1960). Only recently I was drafting the cover blurbs for these books, and as I thumbed through them to remind myself of characters and situations, I very nearly got sucked into re-reading all of them. I find them irresistible.

And finally, alongside these two authors being reintroduced to audiences for the first time in half a century or so, we have a single title by a quite well known author, albeit one more well known for her children's fiction than her grownup novels. 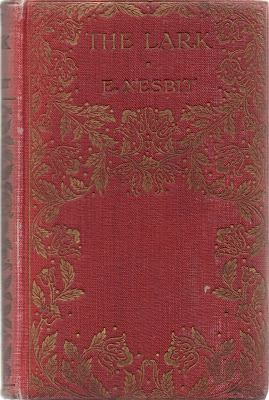 I reviewed E. Nesbit's final novel, The Lark (1922), back in 2014 (see here) and was absolutely charmed by it. I was excited earlier this year when Simon at Stuck-in-a-Book shared his pleasure in the book, and then shortly after Harriet Devine wrote enthusiastically about it. But it has remained peskily difficult for most readers to locate copies of the book, apart from one low-quality e-book version available in a jumbo Nesbit collection. So I'm very pleased that we'll be making available a lovely edition of our own come March.

And that's that. But what have we left out this time that you hope to see us reprint in the future? Please do feel free to let me know!

Have a lovely Christmas, everyone!
Posted by Furrowed Middlebrow at 6:51 AM