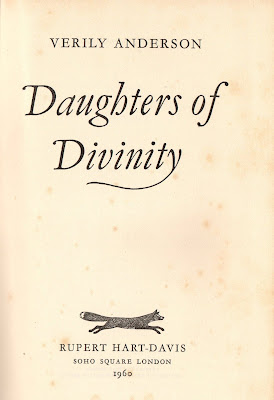 I've been a fan of Verily Anderson's humorous and sometimes poignant memoirs ever since coming across a mention (I think it was in Philip Ziegler's wonderful London at War) of her first, Spam Tomorrow (1956), which covers her sometimes scary but more often hilarious experiences in wartime, including meeting her husband Donald. I've gradually been piecing together a collection of the other five, and just managed to add two of the rarest volumes to my collection—Our Square (1957), which chronicles Verily's family life in London after the war, with her increasing brood of offspring, and Daughters of Divinity (1960), which irresistibly traces her time at boarding school (and deserves to be a highlight of my Grownup School Story List). (The three other volumes, for those unfamiliar with them, are Beware of Children (1958), about Verily and Donald's experiences setting up a holiday camp for children, The Flo Affair (1963), which I discussed a bit here, and Scrambled Egg for Christmas (1970), which I discussed here.

Although I know it won't be long before I dip into Our Square, I couldn't resist starting with Daughters of Divinity, which I've been curious about for years. And it actually lived up to my expectations—it's now fighting it out with Spam Tomorrow as my absolute favorite of Anderson's books. 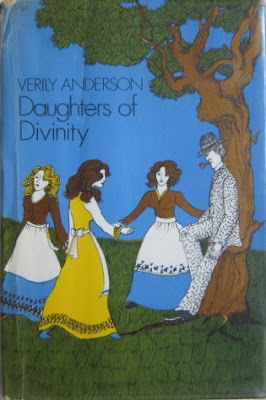 As the book opens, Verily's older sister Rhalou is already off at Normanhurst, a high class boarding-school whose eccentric headmistress is a cousin of Verily's mother. Verily herself is still at home, but spends most of her time pretending to be at St. Judith's, a rigorous boarding-school of her own imagining. The vividness of her fantasies is a bit restricted, however, by the lack of any other girls except her younger sister Lorema, who is beginning to grow a bit restive and to yearn for other sorts of games:

Besides being the gym mistress at St Judith's, I was also, at times, the head girl, and to appease Lorema for being the other three hundred and fifty-nine girls, she had lately been appointed all the other prefects. But I foresaw other concessions might have to be made if the school were to continue to run on its normally smooth lines.

But in the opening scene, a visit from eccentric Cousin Daisy and her husband Cousin Cecil (whose inappropriate use of "bloody" and "bastard" are tracked enthusiastically by the Normanhurst girls) results in plans for Verily to join Rhalou at Normanhurst. (One imagines that Lorema must have viewed Verily's departure with mixed feelings—sadness at missing her sister, but surely also some relief at no longer having to constitute the entire student body of St. Judith's!)

Of course, Verily has difficulties in adjusting to school life (what would be the fun of her tale otherwise?). One of the most hilarious passages of the book comes as Verily is familiarizing herself with the school's voluminous rules—specifically the instructions concerning fire safety:

The first was entitled "In Case of Fire" and was phrased in such an alarming manner that my anger soon turned to terror. At the first sound from a double electric fire-bell (sited on each landing) we were to leap out of bed and dip our bath-towels in our water-jugs and place them over our mouths. (N.B. More deaths had been caused in fires by asphyxiation from smoke than from actual burns.) Wearing dressing-gowns and slippers and carrying our eiderdowns (N.B. More deaths had been caused in fires from pneumonia than from burns and asphyxiation together), we were to form a chain and move in a speedy but orderly manner to the nearest staircase (provided the nearest staircase was not in flames). But the rules gave the impression that we should be most unlikely to find a staircase anywhere that was not in flames. In fact they implied that there was little hope of our survival anyway whatever we did. Obeying the rules would merely help to prolong what would anyhow be a slow and agonizing death.

Verily's bad marks begin to mount immediately, and she never really fits in with the enthusiastically horsey crowd of popular girls ("Just think what it would be like not to hunt! Life honestly wouldn't be worth living.") She is forever getting into trouble and being punished, which at first terrifies her until she discovers she doesn't really mind the occasional public humiliation very much and begins to take it for granted. Eventually, however, for the good of her house (echoes of hundreds of school stories there!), she decides, at the suggestion of one of the horsey girls, that perhaps her trivial bad behavior is all because she doesn't have the outlet for her frustrations and repressions that most of the girls possess in the dangers and excitements of the hunt. Whereupon she challenges herself to do the most outrageous things possible so that she will no longer be tempted (or have time, from the look of it!) to commit trivial misdemeanours. The scene in which she finds herself crawling terrified across the school's glass dome is in itself worth the price of admission—it's also an echo of a whole slew of school stories, though I would be surprised if any of those have the same outcome… 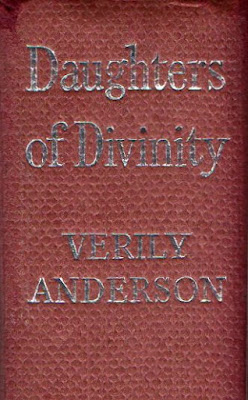 The other passage that particularly made me giggle takes place when Verily, ill with the flu, is placed into a bath chair to be taken to the sanitorium (inexplicably, at this school, a half mile away from the school proper). The mule pulling the bath chair clearly knows the way, but it's Verity's fate to create chaos out of order:

The basic rule with bath chair steering, I remembered, was that to go right, one pulled the rod over to the left. For the moment both mule and I only wanted to go straight on, but when we came to a fork in the drive where we had to turn left uphill towards the stables, I gave the mule a helping hand by pulling the rod over to the right.

For some extraordinary reason the rod on this bath chair was not the same as on my grandmother's. On this one, if one pulled to the right, then right the bath chair went. Moreover any auxiliary steering seemed to have a strangely stimulating effect on the mule, which broke into a sudden run, something between a trot and a canter, leaving the surprised garden boy behind.

Imposing as the springs were, they had obviously not been designed to cope with the rough grass and branches over which we now galloped and I was tossed about the seat as though in a ship in rough seas.

When I was flung helplessly into a corner of the bath chair, I guessed that we had reached a bank where the ground sloped steeply away to the right. I clung tightly on to the handle, fearing that if I let go the bath chair would surely turn over. The mule romped on till I knew, from our shuddering halt, we could only have entered a derelict game larder at the bottom of the hill, removing part of its roof as we did so. I was able to slide back into the middle of the seat.

This was a really delightful, rollicking good time throughout, and should be of particular interest to all fans of school stories and anyone who enjoys tales of childhood misfits who make good. I have a feeling Verily Anderson belongs on my list of authors I wish I could have tea with—though I might find it difficult to swallow cucumber sandwiches in between my guffaws at her self-deprecating hilarity.

By the way, in addition to her six memoirs and a series of Brownies stories, Anderson published three children's books centered around the York family—Vanload to Venice (1961), Nine Times Never (1962), and The Yorks in London (1964). These seem to be even more challenging to track down than her memoirs, but if they contain even a fraction of the humor and high spirits of the memoirs, I am definitely intrigued by them. Have any of you ever caught sight of any of these rare creatures?
Posted by Furrowed Middlebrow at 6:58 PM