Lingering traces (and a big thank you)

First and foremost (I think I started my last post with those very words, so my creativity is at a low ebb, but the words are fitting nevertheless), I have to say that I was so grateful for all the many comments on my last post about the shift in focus I have in mind for this blog. I think I partly expected many people to react with, more or less, a "Well, that's that then. I can remove that blog from my list of online reading material," and I was very very very pleased that so many people chimed in with their encouragement and support. It really meant a lot to me and gave me a big boost in enthusiasm for the blog—and probably in all-around ego as well, but you'll have to ask Andy about that...

I also have to thank several of you who are bloggers yourselves for the invaluable advice about cutting down spam comments by adding a word verification requirement. I should have recalled that this was an option, or should have looked into my options more thoroughly and reminded myself of it, but perhaps I can say, as my excuse, that I was so swamped by spam comments that I didn't have the time to do my homework. At any rate, I turned on word verification two or three days ago and am delighted to report that a) several of you have successfully left comments since then, so it must not be too cumbersome to navigate, and b) that I have received not one spam comment since. Which has given me a whole new lease on blogging life, so thank you, thank you, thank you!

Now, I have already started to experiment a bit with ways of briefly reporting on interesting and relevant books I've read and any particularly profound (um, sure) thoughts I've had about them (concisely!!!), but this was a particularly crazy week at work, so a planned first attempt at such a post has been waylaid for a few days.

(Note to self: Instead of taking time off during the holidays next year, be kind to yourself and take the utterly mad first week of January instead, the week when everyone suddenly awakens from an eggnog- and Christmas cooking-enhanced stupor and realizes they've done no work since Thanksgiving, then panics and tries to catch up while manically attempting to keep irrationally glorious New Year resolutions that are, let's face it, doomed to fail in another week or two. Ugh.)

But over the past couple of weeks, I have been delving a little into books on my TBR shelves that I've been meaning to get to for ages (more on the actual reading soon), and I've come across a couple of interesting tidbits buried within the pages. I admit I first thought of a post about items found in my books a long time ago (and there's nothing whatsoever original about such an idea, of course, as numerous other people have done the same), but it somehow felt too forced at the time and I scrapped it. But having come across three rather evocative items in a short span of time, I figured I might as well share them.

Now I don't know if other people feel that some irrevocable meaning attaches to found items from the books in which they're found, or if such a daft notion would never occur to anyone but me. But I do.

So, for example, a bit of extra poetic meaning attaches to the fact that a ticket to a St. Martin-in-the-Fields concert, dating from 1994, wound up in my copy of E. H. Young's Miss Mole, acquired nearly 20 years later at a Friends of the San Francisco Public Library Big Book Sale.

I could almost imagine that a latter-day Miss Mole attended this concert and left her ticket behind. And of course the ticket made me yearn for London even more than I ordinarily am on any given day of the week.

And it's certainly not inappropriate that tucked inside my long-unread Virago edition of Dorothy Strachey's Olivia was a ticket (sadly undated) for the P&O European Ferries. Someone was taking this very short novel, about a British girl at a French boarding school, along with them on their journey from Portsmouth to Le Havre. 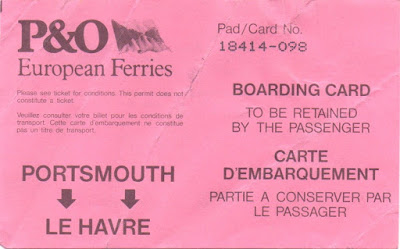 Nowadays, it looks like a similar ferry (P&O seems to no longer exist and the only ferries on this route are operated by Brittany Ferries) takes a little under four hours, so if the former owner of the novel was a fast reader, I hope he/she had other reading material as well or was planning for a little sightseeing or a nap along the way as well.

In view of the fact that the location in which a book is found adds meaning to the book for me, it is with regret that I admit that I can't recall for sure from which book the Du Maurier cigarette ad (or possibly an insert in the cigarette package itself?) came, but it's clearly rather old. 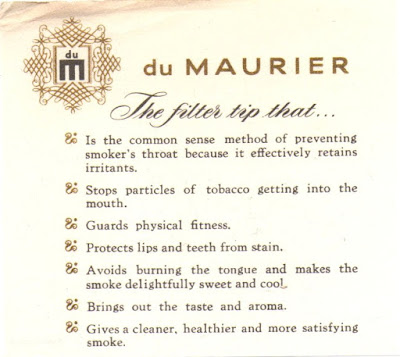 When was the last time the American or British government would have allowed an assurance, in a cigarette ad, that a particular brand of smokes "guards physical fitness"? Why, who knew? Smoking these cigarettes is practically good for you!

I'm including this item here with the other two because I recently came across it again, having obviously removed it from a book a while back in order to keep it from falling out and getting lost while I was reading the book. I put it in a safe place, but then forgot it there, and the rest is history. And I read so many old books that I have no clue now in which one it might have been nestled.

But now that it has been found, I had to locate an appropriate new home for it. This is surely a problem few people would consider seriously, but I rather did. Finally, looking at my bookcase, and at the older books I have, I decided that, for me, Rosamond Lehmann somehow seems like a likely smoker, or at least an author who would have had a lot of smokers around her. So the cigarette ad's new home is my nice early copy of her novel, The Ballad and the Source.

And that’s enough of that for now. If I went through all the books on my shelves, I would find dozens more such things, so perhaps I'll do a bit more digging someday. Meanwhile, I'll get back to thinking about a workable "book report" post. Hopefully coming soon...
Posted by Furrowed Middlebrow at 6:30 PM