Okay, in this post I am going to get completely caught up with my recent reading or very grievously injure myself trying.

It's odd how I tend to veer wildly in my reading, but once I'm into or out of a genre, it takes a while to cycle back around. After obsessing over them for several months, I've been reading very few school stories in the past couple of months, and very little children's fiction in general. But, two exceptions to note: 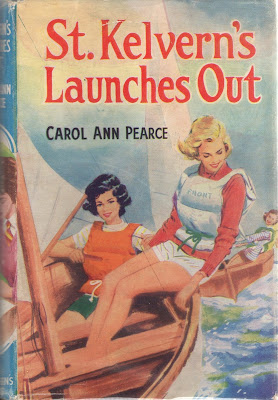 I read St. Kelvern's Launches Out by CAROL ANN PEARCE not long ago, and found it completely enjoyable and amusing, but—either because of my particular mood (perhaps just not being in a school story frame of mind) or because of other distractions or some other deficiency on my part—I'm also finding it hard to recall now, apart from the difficulties of one character in deciding what career she'd like to pursue.

But I did enjoy it at the time, and my memory is notoriously bad, plus I know this is a favorite of many school story fans, so bear all of that in mind and don't hate me for not falling instantly in love with it. 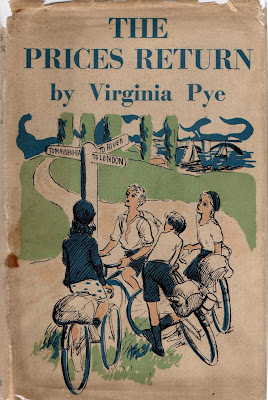 Then, here's one it took me an embarrassing amount of time to get to. I wrote about having acquired a copy of VIRGINIA PYE's The Prices Return I don't know how long ago. It had been recommended by Call Me Madam for my World War II Book List, as an appropriate addition to the Postwar section, and it certainly does belong on that list. I was even a bit surprised by the number of references—in what is very much a book for teenagers, I assume—to bombed out buildings, memories of blackouts and doodlebugs, and even one character having been "twice dug out after air rairs". In addition to which, the head of the family, Mr. Price, is, we are told, off in Germany helping with the refugee situation there.


The postwar housing shortage is clearly delineated in Mrs. Price's difficulties in finding even a temporary abode near her new job in London. Moreover, rationing in part leads to the central adventure of the novel—the children's attempt to maintain a goat in the middle of London (indeed, at one point, accidentally finding themselves and the goat in the middle of Piccadilly Circus) while keeping it a secret from their mother. It's not a terribly plausible sub-plot, and it wore just a bit thin for me, but the characters and story are so cheerful and charming that I can't quibble much. I'm on the lookout for Pye's other wartime titles now, and I had forgotten, while reading the book, that she was Margaret Kennedy's sister.

Just before New Year's, I had another strange shift in interest (or shift in obsession?). It had, for whatever strange reason, been quite a while since I'd read a Virago, though I have a couple of shelves full of those wonderful little green paperbacks from the 1980s, and they probably went a long way toward launching me on my current expeditions into ever more obscure books and writers. 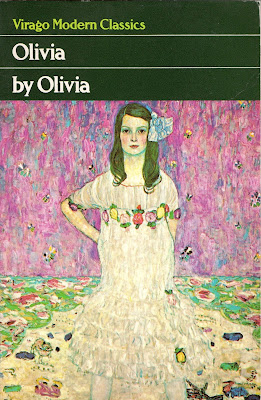 First, something made me pick up DOROTHY STRACHEY's one and only novel, Olivia (1949), published under the pseudonym Olivia as well (presumably indicating a considerable level of autobiographical content in the novel, if the title character and author are supposed to be one and the same). Strachey was the big sister of historian and Bloomsbury-ite Lytton Strachey and Freud translator James Strachey, not to mention the sister of Marjorie Strachey, who also published fiction, sister-in-law of Ray Strachey, who published novels and a prominent history of the suffragists, and aunt of novelist and Persephone author Julia Strachey. But despite all the prominent, scandalous nonconformity of her relatives, she chose to publish her (mildly) lesbian-themed novel under a pen name. 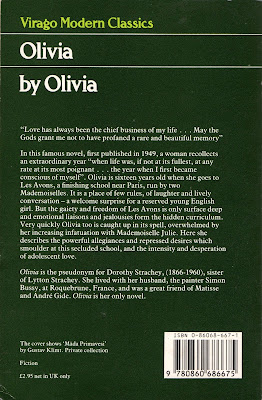 In fact, anyone who approached Olivia hoping for something scandalous must have been—even at the time it first appeared—rather disappointed. It's actually a well-written, serious exploration of an English schoolgirl's infatuation with an attractive headmistress at a French boarding school. It could practically be a girls' school story itself, for all of the titillation you'll find, except that the rollicking adventures and near-death experiences are absent and the crush and all its implications and torments are treated with respect and dignity. It's true that the headmistress and her partner in running the school have presumably been lovers in the past, though that relationship has now deteriorated and is tainted with jealousy and spite. But it's hard to imagine anyone getting their knickers in a twist over that. If Olivia isn't one of my favorites (if nothing else, it's just too short to be fully satisfying), it's still a quite interesting read, especially for anyone who enjoys school settings. 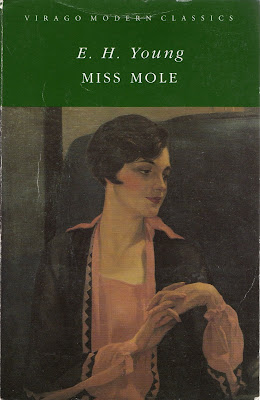 Holding the little green Virago edition of Olivia in my hands seems to have been an appealing experience, because I immediately proceeded to another of the unread Viragos languishing on my TBR shelves. And it was a great way to celebrate the New Year's that the first book I completed in 2016 was a new favorite. Does it subtract from that felicitousness that multiple kindred spirits—friends and fellow bloggers alike—have been telling me for years that I should read E. H. YOUNG in general and Miss Mole (1930) in particular? 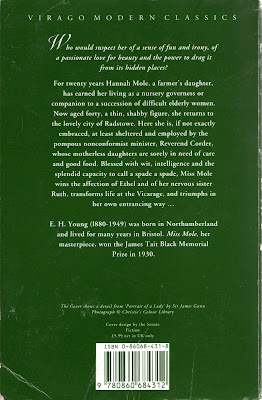 Well, better late than never. And it's certainly a worthy addition to my imaginary "top shelf," where all of the books I love most are virtually kept. (In actual fact, those "top shelf" books that I own in physical copies are scattered throughout my bookcases at present—not the least reason for this being that one shelf probably isn't large enough to hold them all—not to mention those I have only as e-books.)

At any rate, what a wonderful, odd, and, indeed, wonderfully odd novel Miss Mole is. It's the tale of a 40-ish spinster with a troubled past, who has drifted from post to post—sometimes a companion, sometimes a housekeeper—never staying for long because she possesses a bit too much dignity, a troubled relationship with the truth, and a tendency to speak her mind a bit too eloquently.


It's certainly "uncozy" and therefore right up my alley, and it's also, I found myself thinking, more "grown up" than most novels. Which brought to mind Virginia Woolf's famous declaration—about George Eliot's Middlemarch—that it's one of the few serious works of fiction written for grownups (i.e. presumably—though I hate to assume I know what Virginia means, ever—those readers who aren't looking merely for adventure or thrills, and aren't satisfied with romanticized, easy portrayals of the comedies, conflicts and tragedies of life). And if that's what Woolf meant, then she should certainly have read Miss Mole (though, now that I think of it, perhaps she did, and probably, just to spite me, she wrote something snarky about it, as she was so prone to do with her contemporaries).

[And of course, after I had already written that paragraph, a Google search for something completely different revealed by chance that Woolf had indeed been snarky about Miss Mole, which frankly makes me feel a bit snarky about Woolf herself, and nothing good can come of everybody being snarky, now can it? So I will move on.]

For me, the idea of grownup-ness stemmed from the fact that Miss Mole, with her unpredictable attitudes, morals, and philosophies, is so plainly not any kind of romantic heroine for a novel—not even any kind of heroine at all, for any kind of novelist with less vision and wisdom than E. H. Young. Any reasonably talented writer might have made Miss Mole an interesting supporting character, but to make her likeable—even lovable—as a main character seems to me an extraordinary achievement.

And she is interesting because she is completely convincingly damaged—even rather seriously damaged—by past experiences, and her position in regard to the world is always one of defensiveness and mistrust, interpreting everyone around her for the possible threat they could pose or the possible benefit or entertainment to be obtained from them. But this rather tense way of going through life is tempered by a surprising ability to take joy in the simple things that come her way—observing people on the street, taking a solitary walk, treasuring her few possessions—that makes us pull for her despite her occasional shadiness (which Young also doesn't hesitate to show us).

I found myself relating to Miss Mole quite a lot—sometimes in ways that made me do a bit of soul-searching about my own damage and my own sometimes paranoid approach to other people or strange situations. Which made the novel that much more satisfying. However clever they may be, stories with easy happy endings that solve everyone's problems, and characters who are pristine and undamaged apart from one easily-solved dilemma, can be quite fun to read, and some of them might belong on an imaginary "second shelf," but for me, a certain amount of realism about the fact that we all have our scars and ghosts from the past, and there's no such thing as a pure and simple happy ending (however lovely life may be overall, as indeed it is), seems to be required for a book to belong on my "top shelf."

And now I'm excited because there are ten more E. H. Young novels for me to explore (it will probably take me ages to work my way through them, what with everything else I want to be reading too, but I am excited nevertheless), and most of her books were either reprinted by Virago in the 1980s and so are fairly readily available or (in the case of the first four) are out of copyright in the U.S. and available for free online. I wonder, too: Young apparently also wrote two works of children's fiction—Caravan Island (1940) and River Holiday (1942). Has anyone sampled those?

But all of this leads to the usual bewildering question: why on earth are none of E. H. Young's novels in print, either in the U.K. or the U.S.?! Clearly, she belongs on the exclusive list of titles I would love to publish myself were that ever to be a possibility.

Well, that brings me up to date with just one intentional omission. There is one more lovely Virago that I've read recently, but I've just learned that the other of this author's two novels, the one which was not reprinted by Virago and is now rather rare, the one that is held by only one U.S. library apart from the Library of Congress, seems to be wending its merry way toward me via interlibrary loan. I am therefore going to wait and mention both of her novels together. I quite liked the latter one; what will I think of the former? And one more hint as to this author's identity: she has a much more famous sibling…
Posted by Furrowed Middlebrow at 5:30 AM