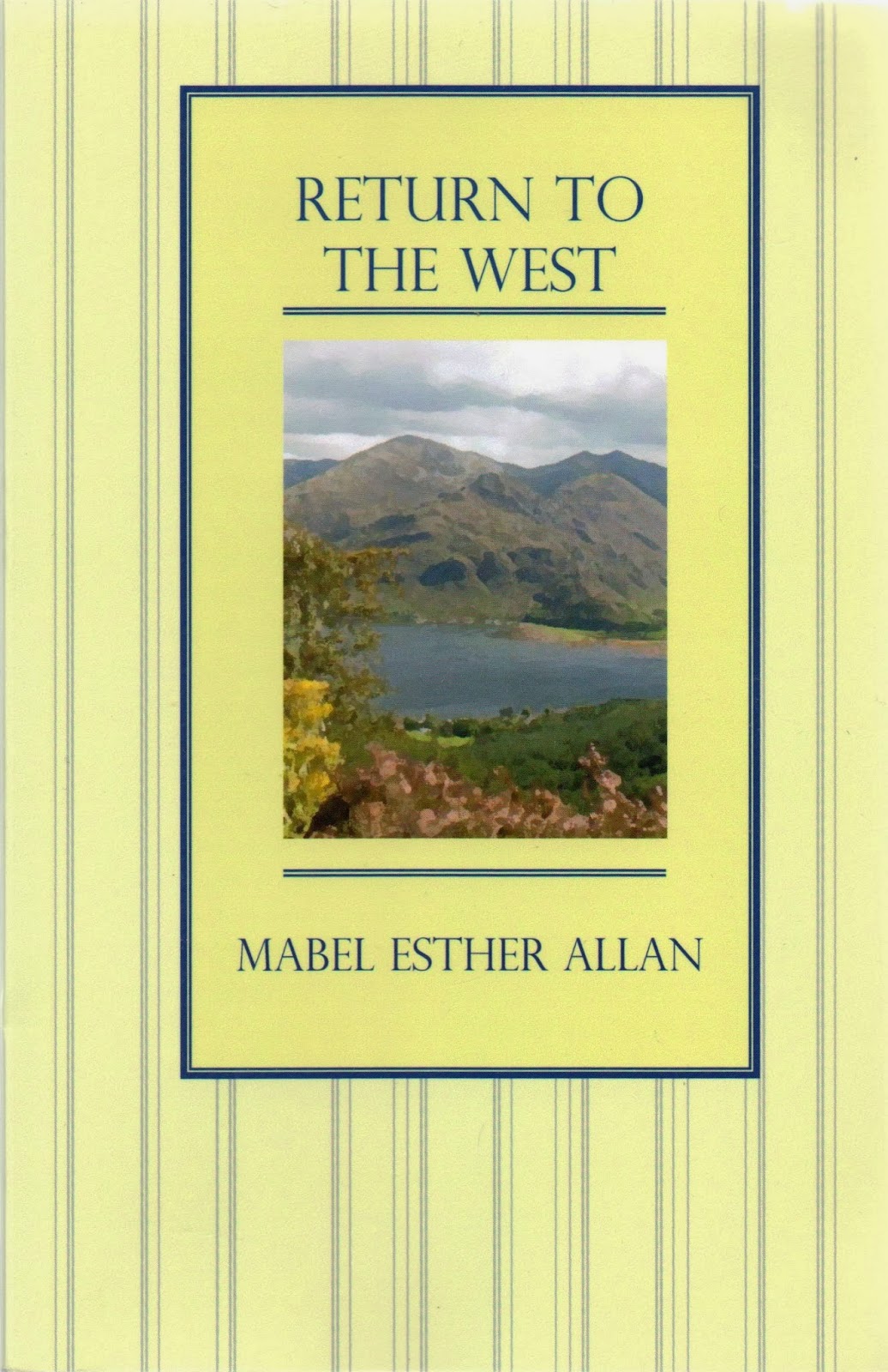 A while back I spent a weekend being more or less captivated by this strange little novel, but I've had a lot of trouble figuring out how to write about it and how best to explain that captivation (captivity?).

Apparently the earliest surviving fiction by Mabel Esther Allan (best known for her many successful children's books), Return to the West at first seemed certain to be a light, romantic, even rather frivolous story of first love in the Highlands.  But it turned out to pack a bit more of a wallop than I would have expected.  Under it's simple exterior, Return seems to be an understated but surprisingly profound evocation of the emotional turmoil of a young woman who finds love before she's quite ready for it.

Derrin Lennox is 18 and wavering between childhood and adulthood when she comes to Ardglen in the Highlands (based on Glenelg Bay, a setting Allan used in many of her later works). She's on holiday with her rather stodgy, traditional, and perhaps not very happily married parents, and on her first day in Ardglen, Derrin meets a well-known landscape painter, Keith Rossiter.  Rossiter is significantly older than Derrin (it's not spelled out, unless I missed it, but he has had time to establish himself as an artist, and long enough for Derrin to have heard of him in her art classes, which surely makes him, conservatively, at least a decade older?).

But the age difference doesn't prevent Derrin from being swept off her feet, despite—or perhaps in part because of—her parents' disapproval. As Derrin notes, her parents are prone to disapproval:

"The worst of it is," she mused, "that the people mother and father think undesirable are usually the most interesting. All these look terribly desirable. It was always awkward about Nela. She was so awfully clever and had such a lot of ideas, and she just could not remember that there are all sorts of things that are 'unmentionable' at home."

Although her parents are merely sketched out and do not appear frequently in the novel, they do seem to have a rather surly relationship, and this rather cranky coexistence might help explain Derrin's determined resistance to their plans for her future happiness—seeing as how they haven't done such a great job in planning their own.

A few days after Derrin's meeting with Keith, some family friends arrive on their yacht, along with their son Ian, who has long been Derrin's parents' choice for her future husband.  Derrin has always liked Ian—though she has understandably resented having him thrown at her at her opportunity—but having met Keith she now sees Ian as immature and petulant, and she resents his assumption (and that of her parents) that she will marry him.  She has a not-unusual youthful determination to avoid having her life planned out for her, but she is about to learn that life has a way of planning itself out despite youth's best efforts at freedom.

I don't want to give away too much of the story here, since the plot unfolds in a really lovely way and, despite its simplicity, it sometimes achieves an almost mythical tone, which I wouldn't want to spoil. But in order to discuss the novel at all, I really have to mention the central plot complication (which isn't that much of a shocker, but if you really don't want to know, stop reading now).

First, I found one element of Allan's storytelling particularly powerful.  Throughout the novel, Derrin's thoughts and statements reflect a kind of double thinking.  Her feelings are often conflicted, and Allan's prose is adept in showing this youthful uncertainty. Even in the following early passage, in which Derrin has gone, unwillingly, for a sail with Ian on his family's yacht, the conflict is apparent, if subtle:

She sat staring through the streaming panes at the yacht anchored in the bay, dimly visible through the rain and mist. Ian was the complication. Ian with his sulky, boyish mouth and his bombastic manner, his sudden, rather endearing charm.

"I believe," Derrin admitted to herself, "that in time I could have liked him—if mother hadn't said so much in his favour and if I'd never met Keith. But no other man will ever mean anything to me again. I know—I'm sure. Keith's so dear that his darlingness nearly breaks my heart."

Derrin is forever assuring herself of her unquestionable, irrevocable feelings, as she does here, yet her assertions are very often undercut by the details she notices or by her passing thoughts.  Thus, even in stating bluntly that no man could tempt her from Keith, she seems to be revealing—to the reader if not to herself—that Ian just might.  And of course, therein lies the complication...

Likewise, there are constant reminders, in the midst of her seemingly mature, stable love for Keith, of her extreme youth and its accompanying restlessness, as here when she goes tobogganing with a village girl several years her junior:

The wind rushed past them; the snow flying from under the runners had a hot sting. Derrin's green eyes blazed. She was a child again, a comrade of Elfreda's. They were completely united by their shared excitement.

And there is a larger conflict in the novel too—between Ardglen and the real, mundane, workaday world.  Derrin and Keith marry and have a lovely daughter, Drina.  They live mainly in London, and for several years they don't make a return visit to Ardglen.  For Derrin, Ardglen is invested with an almost supernatural power to provide happiness and a grounded appreciation for what really matters, while London is presented quite differently.  In London, Derrin finds herself—no doubt like many young married women of the time—somewhat adrift:

She was only twenty-one. Sometimes, in the infrequent moods when she knew youthful longings for crowds of friends, boys and girls laughing and shouting, for complete freedom, she questioned her wisdom in marrying Keith. But always at the thought of life without him her heart contracted in pain. There could be no life without Keith, no happiness any more. He was necessary to her, his every mood, his tenderness, his understanding.

But when Keith was not with her, her boredom grew, fight as she might against it. There was not enough for her to do. The small house seemed to run itself, the nurse was efficient and was nearly always a picture of shining cleanliness. She read a great deal, and began to take an interest in the lives of painters. She made delicate, embroidered smocks and underwear for , for she was a clever needlewoman.

Here, too, is Derrin's fascinating doublespeak—she questions the wisdom of her marriage and then immediately retracts her questioning, as if her defenses have kicked in and she can't accept what she's just thought.

And thus is the stage set for Ian's return to the scene:

A man in white was standing by the gate of their house. At the sight of him Derrin's heart leaped in fear. He was tall and broad, with a sun-tanned face and clear blue eyes. In spite of a certain heaviness about the jaw his face was pleasant and attractive. His fair hair was plastered against his head.

I admit that I felt highly ambivalent at this point in the novel, and almost wanted to stop reading.  Ian's reappearance and the events he triggers are a distinctly "uncozy" twist—though the fact that I was worried and annoyed is surely a testament to how Allan had made me care about her characters—perhaps even a testament to her portrayal of Ian himself, who may be an annoyance in the novel but is a charming and never unrealistic or unrelatable one.

Despite my hesitation, I did persist, and I realized I had had too little trust in Allan's abilities.  Even at the very outset of her career, in one of her first writings, she is more subtle and thoughtful in her handling of a difficult situation than many older or more established authors might have been.

This really is a novel about the intricacies of love and passion, and especially Derrin's own needs and wants—both emotional and sexual, which is perhaps surprising in a novel written in the 1930s. In the end Allan provides a convincing and satisfying ending that doesn't simply erase the ambivalence that has gone before. That, for me, is what lends the novel its lingering, haunting power, and will likely make me re-read it before too long.

I had never read any of Mabel Esther Allan's other works when I picked up Return to the West.  Some of her enormous output of fiction for girls (more than 150 titles in all) has been reprinted by Fidra Books and by Girls Gone By in recent years, however, so it is at least accessible.  Although Allan apparently wrote several adult novels in her youth, before she began to write children's fiction, Return to the West seems to be the only survivor of this period. The introduction to the Greyladies edition of Return to the West is an excerpt from a letter written by Allan to a friend in the 1980s, in which she mentions several other manuscripts now lost or destroyed.  The only adult fiction she published in her lifetime was a mystery novel, Murder at the Flood (1957), written two decades after Return, which Greyladies has also reprinted.  Greyladies has also published two more mysteries, Death Goes to Italy and Death Goes Dancing, which were never published at all in Allan's lifetime.

Since Return to the West is probably now my second favorite Greyladies (next to Mary Bell's Summer's Day, which I've already written about ad nauseum), I immediately placed an order for Murder at the Flood and Death Goes to Italy, and I've picked up the Girls Gone By edition of Margaret Finds a Future (1954).  If these are as enjoyable as I expect them to be, more new acquisitions may have to follow.

In her letter used as the introduction to Return to the West, Allan ends by modestly saying, "Anyway, here it is ... risen from the dead. Maybe it should have stayed dead. But it may interest some people."

Indeed it does.  Though it's hard not to feel a bit of regret for the other novels that preceded it but are now permanently lost...

Posted by Furrowed Middlebrow at 6:43 AM