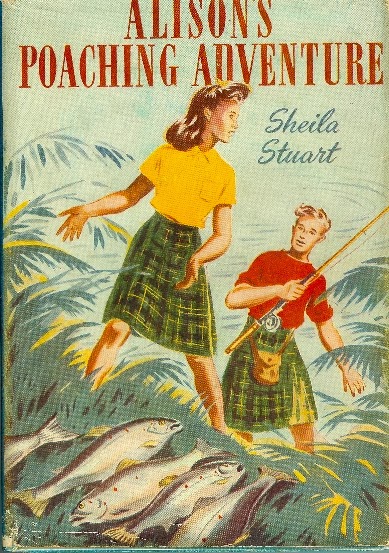 Below are 15 more authors, including the three PULLEIN-THOMPSON sisters, who, rather oddly, all wrote children's horse stories.  Certainly something fishy—er, horsy, rather—going on in that family!

Then, who knew that Margaret Kennedy's sister, VIRGINIA PYE, was also a successful author.  She specialized in adventurous holiday stories, some of which sound rather interesting.

MIMPSY RHYS is almost definitely a new name for just about everybody reading this.  While many of the other names came from current publishers who are reprinting classic children's books, Rhys comes from a contemporary review.  As far as I can tell, she published only one book, Mr. Hermit Crab: A Tale for Children by a Child (1929), about which I've been able to find absolutely nothing.  Anyone remember their grandmothers talking about enjoying this book?

Although horse stories are really not (so far, at least) my "thing," I have to admit that MARY TREADGOLD's stories which make use of wartime and postwar conditions, are tempting me a bit.  We Couldn't Leave Dinah (1941) is about children who miss the evacuation of a fictional Channel island because they refuse to abandon their horse, and end up aiding the resistance to the occupying Nazis, and its sequel, The Polly Harris (1948), "follows the Templeton children to the problems of post-war London, where they become involved in terrorist bombings and smuggling" (ODNB).  Hmmmm.

And finally,  JOHN WEBB's Mr. Papingay series sounds oddly familiar, but I can find little information about it.  I wonder if one or more of these are among the few children's books I actually read as a child (I was a distinctly unrestricted child when it came to reading material, and I generally wound up picking my own books, usually with shockingly bad judgment, from whatever library shelf I happened to be near).

All 15 writers are shown below, and all have been added to the main list.  I hope you enjoy!

Posted by Furrowed Middlebrow at 10:12 AM