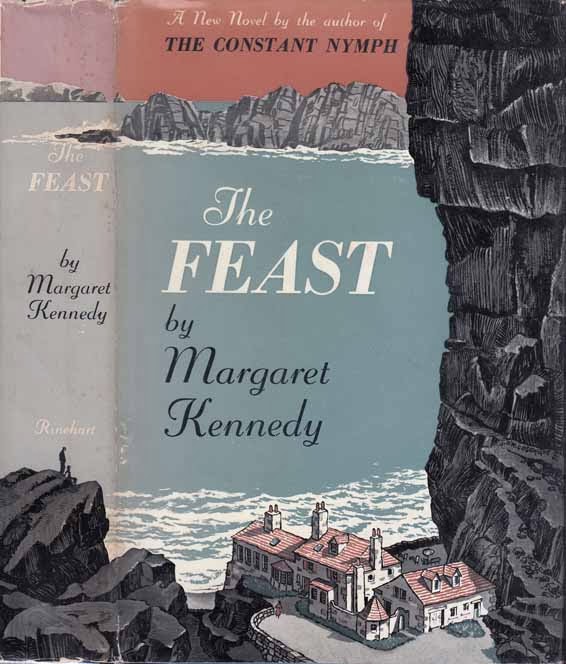 Here I am, reviewing another title that is actually in print (from Faber Finds, who have also reprinted several of Kennedy's other titles)—I'm becoming practically mainstream of late!  (But fear not, if you're interested in the more obscure side of my reading habits, I do have some interlibrary loan requests pending.)

This is only my second experience of reading Margaret Kennedy, after sampling her most famous novel, The Constant Nymph (1924), a few years ago and being rather lukewarm on it.  Nymph was a massive bestseller at the time, and became a successful play and an early film adaptation, but somehow (and I don't exactly remember how, as I didn't make notes at the time) it was rough going for me.  It's taken me several years to get around to trying Kennedy again—though in that time I nevertheless compulsively accumulated three more of her books at three different library book sales.  Perhaps I instinctively knew that when I did give her another chance, I'd be hooked…

Because The Feast has immediately become a favorite, and will be a priority for re-reading when time allows.  It's absolutely lush with vivid characters and brilliant scenes.  But it's not the easiest novel to describe.  Jane at Fleur in Her World did a far better job of summing it up than I could hope to do when she reviewed it last year, and also made some connections that I completely missed, but I'm going to try not to steal from her (too much).

The novel opens, in 1947, with a clergyman discussing with his friend the unusual funeral oration he is trying to complete, for several victims irretrievably buried when a portion of cliff—loosened by the explosion of a stray mine a few months earlier—collapsed onto a hotel located in an idyllic cove.  We learn the identity of one of the victims, and that most of the hotel's guests were out at the time and were therefore saved, but we don't know who else has perished until the novel's final pages.  (There are seven victims in all, which, according to Faber's description of the novel and the Orlando Project's discussion of it, are each identified with one of the Seven Deadly Sins.)

Kind of a cliffhanger.  Get it?

Ahem.  Sorry for that.  At any rate, then the clergyman begins to tell his friend the story, and we flash back to seven days before and build gradually back to the earthshattering (literally) event itself.

Although this dramatic framing of the novel might sound rather too ominous or depressing, or else tediously ponderous or philosophical, in Kennedy's hands it's anything but.  The impending upheaval does lend the events of the plot an urgency and meaningfulness, even a kind of suspense, that they might not otherwise have.  But it's never heavy-handed, and never less than a downright frolic of a read.  Right from the beginning, I found the novel unputdownable, as publishers like to say.

Many of the characters are thoroughly loathsome, and parents come in for particularly harsh treatment, from Mrs. Cove—who relentlessly deprives her three children of all but the bare necessities of food and clothing so she can sell their rations on the black market, and who watches their near-drowning in a strong tide with hopeful ambivalence—to a defrocked canon whose demoralized daughter lives at the mercy of his temper, to Lady Gifford, the lazy, gluttonous hypochondriac who may, it is implied, have eaten a tapeworm to keep her sickly figure while consuming extra rations.

And yet, every character, good or evil, is so vividly and entertaining described, and the plot bops along at such a rollicking pace (characterized by short chapters heavy on dialogue) that it's all quite entertaining and addictive fun.  There are so many wonderful passages that it's hard to choose a quote, but I'm settling on a long passage from early in the novel that made me realize The Feast was likely to become a favorite.  It's a sort of tug of war over train seats, between the four well-to-do Gifford children, accustomed to being babied and getting what they want, and Mrs. Cove and her three downtrodden offspring, accustomed to getting nothing that they want (and little enough of what they need).  These seven children form the core of the novel, and in a real sense the other characters' attitudes toward and relations with the children will seal their fates:

Sentiment among their traveling companions had been on the side of the widow, and nothing about the Giffords was likely to change it. They had an unusually well-nourished look, and no family could have been so faultlessly dressed on its legal clothing coupons. They belonged quite clearly to the kind of people who feed in the black market, who wear smuggled nylons and who, in an epoch of shortages, do not scruple to secure more than their share.

There was no aroma of the black market, or of clothing books purchased from needy charwomen, about the newcomers. They looked like an  illustration in a Save Europe pamphlet. Everything they had was meager. The three girls were tall and pallid, like plants which have been grown in the dark. Their teeth were prominent but they wore no straightening braces; their pale blue eyes were myopic, but they wore no spectacles. Their hair was home cut, in a pudding-basin bob, and their shabby cotton dresses barely covered their bony knees.

The widow herself was a spare little woman, grim and competent. She whisked her family into the compartment as soon as the last Gifford had vanished down the corridor, thrust each docile child into its appointed seat, removed all the Gifford luggage from the rack and replaced it with her own. She did all this with a speed and in a silence which might have daunted protest, if any had been offered.

A gloom settled upon the compartment and the pendulum of public sympathy swung back a little toward the handsome, noisy Giffords. It seemed that this woman was familiar. Everyone felt that they had met her before. She had appropriated something from each of them at one time or another, with the same speed and competence. She had got in front of them on the bus queue. She had snatched the last piece of fish off the slab under their noses. And her children, spiritlessly knitting, were her weapons.

Re-reading it closely now as I quote it, I think this could very well be used as a sample in a "how to write brilliantly" guide.  The poor little girls "like plants which have been grown in the dark," and the elegant suggestion of class tensions and the stresses of postwar deprivations are perfectly done.  And the scene actually goes on from there, with sympathies in that train compartment shifting at least once or twice more, but I'll leave that for readers to enjoy on their own.  The point is that virtually all of the novel is sustained at this level of layered meanings and tensions and sharp, funny characterizations.

What might be seen as a central theme of the novel is a sort of monologue offered up by Mr. Siddal, the hotel's more or less good-for-nothing owner:

"Perhaps," he suggested, "the sufferings of the innocent are useful. That idea first occurred to me when one of my children said how unkind it was of Lot to leave Sodom, since, as long as he stayed there, the city was safe. The presence of one righteous man preserved it. I shouldn't wonder if the entire human race isn't tolerated simply for its innocent minority."

He lowered his eyes for a moment and gave her a look. Then he raised them again and pursued the hare he had started. She was an intolerably stupid woman and could not understand a word he said. But he enjoyed the sound of his own voice and nobody was likely to interrupt him.

"I daresay," he said, "that mankind is protected and sustained by undeserved suffering; by all those millions of helpless people who pay for the evil we do and who shield us simply by being here, as Lot was in the doomed city. If any community of people were to be purely evil, were to have no element of innocence among them at all, the earth would probably open and swallow them up. Such a community would split the moral atom."

And perhaps this is meant to be a central theme, as it obviously pertains to the "feast" of the title, a long-dreamed-of wish on the part of the three Cove children—who have themselves always been kept near starvation by their abominable mother—to selflessly offer hospitality to others.  Moved by this desire, the adults and even the rather more selfish Gifford children take up contributions and organize the feast, to which everyone at the hotel is invited—though not all, of course, choose to attend.

On the other hand, Mr. Siddal, who offers this comforting philosophy, is the one character we know from the beginning will be crushed to oblivion in the novel's final judgment.  So perhaps Kennedy meant us to take his assertions with a grain of salt?

There are numerous other entertaining elements in the novel.  References to the war—which has ended only two years or so ago as the story begins—and a clear sense of postwar conditions lingering in the background were particularly interesting for me.  Subtle observations about class and hypocrisy, like those evident in the train passage quoted above, litter the novel.  And, as so many other women novelists of the time enjoyed doing, Kennedy also sketches out a rather exaggeratedly unsympathetic lady novelist—a crude "old harridan" (as the original Kirkus review of the novel put it) who advances the literary careers of her "protégés" in exchange for sexual favors, and who is currently engaged with what sounds a painfully bad novel about Emily Brontë called The Bleeding Branch. Honestly, there is nary a dull moment anywhere.

Happily, I still have two more Kennedy novels—1931's Return I Dare Not and 1951's Lucy Carmichael (the follow-up to The Feast)—on my "to read" shelves, and I don't think it will be long before I have to dive into one or the other of them.

The moral, clearly, is that compulsive book shopping and hoarding really do pay off!
Posted by Furrowed Middlebrow at 10:17 AM