This excellent memoir of nursing during World War II got some renewed attention a few years ago when Booker Prize-winning novelist Ian McEwan was accused of plagiarizing portions of it for his novel Atonement.  Regardless of the merits or lack thereof of those accusations, the controversy had the happy result of drawing attention to the book and getting it reprinted for a new audience.

Lucilla Andrews is primarily known as a romance novelist, who published nearly three dozen books from the 1950s into the 1990s.  Even in her romance writing, however, she frequently used a wartime setting and drew on her wartime experiences, forcing her characters to face up to the unidealized, unromanticized realities of war.  In fact, as she describes in her memoir, her earliest manuscripts were rejected by publishers because in the years immediately after the war, readers weren't interested in reliving the war so vividly.  Andrews had to rewrite the novel which became her first published book, The Print Petticoat (1954), to tone down her descriptions of war and injuries and focus on a romance between two characters, before a publisher accepted it.

Later on in her career, she returned to her wartime experiences, and seems perhaps to have decided to make these works more realistic.  I've read one of those late novels, Frontline 1940 (1990), and I have to say that Andrews' descriptions of bombing raids and wartime conditions were certainly vivid and suspenseful.  Among other things, they kept me reading even when the relatively traditional romantic plot wasn't quite holding my interest!

Andrews became a volunteer nurse (VAD) in 1939, at age 17, starting just as war broke out.  She later underwent professional training, which she only finished a short time after the war had ended.  This book takes her all through the war years (along with a chapter flashing back to her childhood, spent by turns in the Middle East with her parents and as an empire orphan in boarding school), and through her personal growth and development as well.

"Lu" has her first romantic interlude by moonlight at Stonehenge, and then a 7-week romance with an RAF officer, until his plane is shot down.  She recalls the arrival of convoys bringing Dunkirk survivors to the hospital, and hears the soldiers' harrowing tales.  She tells of the progression from Blitz to flying bombs to rockets.  And she describes V-E Day in London and life after the war, including the tales of horror told to her by soldiers who were among the first liberators of the Belsen concentration camp.

Andrews is a compelling storyteller, whether humorously describing her complete exhaustion during her time on the night shift:

One morning as I pushed my bicycle back to our Mess for breakfast, I was stopped by Mrs. S. ‘What’s up with your bike? Tyres don’t look flat.’

‘They’re fine. But I keep falling asleep and falling off.’

Then came the conscious fight to surface through the smothering waves of sleep. … A fight that made sense of the strict rule forbidding us to sit down on-duty at night, unless feeding or special-nursing a patient, or in our half-hour night meal break. Whenever I broke the rule when alone in Families kitchen and sat on the lid of the huge bread-bin, instantly I went to sleep, fell onto the floor and only then woke as I was so scared of the kitchen cockroaches.

Or when gut-wrenchingly describing her puzzlement when a stern Sister orders her to violate all of nursing's strict rules and go and sit with a patient and chat with him:

‘Hallo, soldier.’ I tried to force a smile and hoped it did not look the grimace it felt. I was hollow with fear that redoubled when I touched his icy and oddly stiff hand. Only because I knew that senior Sister was watching, was I able to hold it. I felt I should explain my presence and, not knowing how, told him the truth. ‘Sister says I can sit and natter with you.’

Even when the patient surges upward and nearly falls from the bed, it takes a moment for the reality to sink in:

I only understood when she closed his one eye. An M.O. had appeared. He helped her straighten the boy’s arms and legs, roll his body in a grey blanket and lift the roll on to the waiting stretcher that had appeared on the floor. The M.O. took one end, an orderly the other, and before they were out of the ward the Sister had whisked off the under blanket, straightened the long red mackintosh sheet, tucked on a cleaner under blanket. Then she noticed me standing behind the chair. ‘Go and wash that blood off your face and neck at once, girl! It’ll upset the patients. Move, nurse! Can’t you see how busy we are?’

It's a powerful and very effective scene, and even more poignant to re-read while imagining her naïve confusion and self-consciousness in trying to make conversation—not yet realizing how little difference her first impression would make—and seeing how the Sister helps her through the situation with her sternness and lack of sympathy.

One thing that I always love in World War II books is to come across new examples of the multitudes of "stiff upper lip" stories.  First, there are the slogans outside of bombed out businesses, of which Andrews reports two I'd never seen:

‘Open for business round the back—if you can find the back let me know. Signed. Prop.’

‘Chestnuts roasted while you wait. Ta for the free heat Jerry!’

And then there's one of the final bombing raids of the war, featuring an elderly sister from Florence Nightingale's time:

Amongst my many mental pictures imprinted for life is the one of Sister Casualty on my first Saturday afternoon in her domain, when the solitary flying bomb of the afternoon switched off its engine overhead. Sister Casualty, standing straight as a guardsman with her be-frilled cap and the starched, lace bow under her venerable chin in impeccable order, announcing with calm firmness, ‘Will all patients and staff please get down on the floor,’ to a department already crouched on its knees with its head under the nearest bench. The bomb exploded on ruins and brought down every medicine and lotion bottle on every shelf in Casualty, but otherwise did no serious damage. Before getting off the floor, I squinted up at Sister. She was still upright and briskly polishing her spectacles.

The added touch that Sister Casualty takes the opportunity of exploding bombs to tidy her glasses is what made me laugh out loud on the train one evening.

Andrews also reports on walking with a fellow nurse up Ludgate Hill after the terrible December 1940 bombing raids, a sort of pilgrimage to visit St. Paul's, which, "smeared and blurred by smoke, surrounded by devastation, seemed the only intact building in the City, and because it was intact seemed of far more than aesthetic importance. Turning away, we said, as everyone we spoke to said in that day, ‘Didn’t get St. Paul’s, did he?’”  Similar thoughts about St. Paul's are recorded in other memoirs of that time, and of course the classic photo of the dome of St. Paul's looming over the smoke and bombed out buildings around it is one of the most inspiring images of the war.  (I keep a postcard of it on my office wall to remember that none of my day-to-day stress is all that important compared to those dark days.) 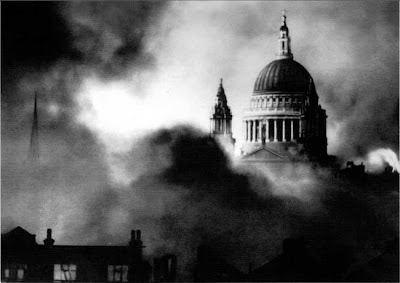 Later, Andrews recalls walking all over The City with about a million other Brits during the V-E Day celebrations, and the hush that fell over the gathered hordes when the lights of London reappeared for the first time.  If I could travel back in time to any period in history, surely V-E Day in London would be near the top of my list.  That's why I nearly burst into tears in the middle of my first visit to Trafalgar Square last October—which would no doubt have caused considerable befuddlement to passersby and to poor Andy, even as well used to my strange literary obsessions and emotional connections as he is!  But regardless, it's always fun to read about the experiences of someone who really was there.  (And, if you can get into time travel fantasizing, including some about V-E Day, check out Connie Willis's wonderful novels Blackout and All Clear, which center around time travelling historians researching World War II.) 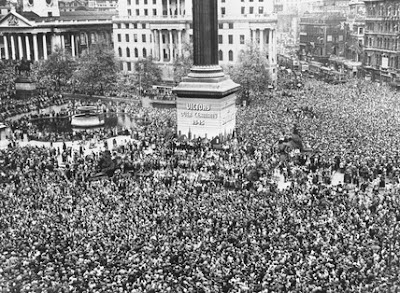 But for me, the very best of Andrews' anecdotes is one that combines the tragic and comic in an unforgettable—and unforgettably biological—way.  It's from early in the war, when Lu is still a volunteer and too young to be present at childbirths except in emergencies.  Of course, during a bombing raid, an emergency arises, with two women going into labor at once ("Every wartime midwife and obstetrician I met agreed that nothing so swiftly induced a baby as the sound of a falling bomb."):

Every instinct I possessed demanded that I dived under Mrs. N’s labour bed, but her baby’s whole head had shot out and with the bomb’s explosion he catapulted from the vagina into my hands trailing a long silver-blue veined cord. He was so covered in grease and so furiously flaying the air with minute arms that I was too busy trying not to drop him to be more than semi-conscious that medicine and lotion bottles, metal kidney dishes, enamel bowls, jugs, and blackout screens were dropping around us.

Obviously, life goes on, even in the darkest times.
Posted by Furrowed Middlebrow at 9:40 PM