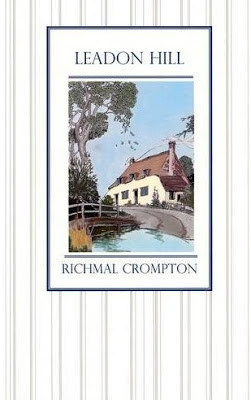 I was excited a few weeks ago to score a used copy of this book (and for cheap, no less!) from Awesome Books, as I read Crompton's Family Roundabout (1948) a year or two ago and enjoyed it a lot.  Leadon Hill is back in print now thanks to Greyladies in the U.K., whom I love on principle for making hard-to-find books like this available again (they’ve also reprinted several newly-discovered D. E. Stevenson books and many of the novels Noel Streatfeild wrote as “Susan Scarlett,” among others).  Since most of Crompton's many novels for grownups (as opposed to her numerous William books, for which she is far better known) are out-of-print and difficult to find in libraries, I'm happy that this book—along with one of Crompton's late novels, Matty and the Dearingroydes (1956)—has been reprinted by Greyladies.

I was so excited, in fact, that when Leadon Hill arrived I bypassed my “to read” stack (more like a “to read” bookcase these days) and jumped right in.

From the Greyladies description of Leadon Hill, I was expecting a sort of D. E. Stevenson-ish village social comedy, having to do with a wife and mother left alone for four months while her husband goes on a fishing trip.  And at first, this seemed to be the case.

Marcia’s husband is a bit needy and helpless (Marcia refers at one point to his “fussiness”), and Marcia is looking forward to some alone time—though they do apparently have a good relationship.  Perhaps they just get on each other's nerves now and again.

A large cast of eccentric villagers are also introduced: the judgmental Miss Mitcham, who lives (symbolically?) on a dead-end road (“Miss Mitcham from her drawing-room window used to watch the return of the baffled motorists and cyclists with a malicious little smile"); the vicar, who plans his sermons to “bring out the deep thrilling notes of his voice,”; his wife, who used to be a kitchenmaid and lives in terror of this being revealed; the elderly Painton sisters, slowly starving to death but too proud to admit their poverty; stern Miss Martyn and her ditzy sister Miss Dulcie, plus their self-righteous niece Olive; superficial Mrs. Croombs, her superficial daughter Freda, and her only slightly less superficial son, Gerald, who bonds with Olive over their mutual feelings of superiority over everyone else; and playboy and sadist Sir Geoffrey, son of the local gentry, who is trying to seduce Freda.  Plus, there’s a local writer (of novels disapproved of in the village) and his wife, Mr. and Mrs. Elliott, who appear sporadically to share Marcia’s dislike of the villagers’ attitudes.

So far so good.  Although there are more dark motivations and unsympathetic characters than D. E. Stevenson would likely have incorporated, a satirical perspective and dark sense of humor could have make much of such a prudish, hypocritical, and/or just plain nasty cast.  Especially when an attractive young woman, Miss West, raised in an artistic household in Itay, moves to the village and stirs everything up with her carefree wholesomeness.  (Wholesomeness in spades, I might add—she’s like a very slightly bohemian Doris Day.)

And indeed, Crompton’s turns of phrase are often brilliant, summing up her characters in clever and original nutshells.  I laughed out loud at the Painton sisters declining to be seated in Marcia’s garden because “[t]hey never could quite conquer the idea that there was something vulgar about deck chairs."  Sweet but confused Miss Dulcie knits unusable garments “which she called 'vests,' and imagined as clothing a large class of unfortunates known vaguely and generally as 'the poor.'  She felt a thrill of joy on a cold morning when she thought of the 'poor' warmly clothed in her 'vests.'"  And the vicar’s wife obsesses over hiding the secret of her past: “The day arranged for the garden party was fine.  Minnie felt that even the weather had forgotten that she had ever been a housemaid.”

But although there are these wonderful bits of humor and sharp characterization, Crompton unfortunately made the decision to focus relentlessly on the villagers, who ultimately come to seem like mere straw figures—inhuman, utterly unsympathetic, and deserving of all the condemnation they get from Marcia and the Elliotts, who, along with the pristine Miss West, are the only characters allowed any glimmer of humanity.  Mrs. Coombs pushes Freda into the arms of the reprehensible Geoffrey (who prides himself on killing chickens with his car as much as on seducing young girls) because she yearns for the wealth and prestige he offers; Gerald loves first the ice princess Olive ("It was as if she were always conscious of some invisible audience to whom she feared to betray any emotion") and then Miss West, whom he finds not icy enough; Olive subtly terrorizes her ditzy aunt; the vicar’s wife protects him from all responsibility (including visiting the deathbeds of his flock) and feels that her lack of charity reveals that she has become a true lady; and all the while Miss Mitcham keeps everyone in strict check.  There is literally no point at which it is possible to like (or even sympathize with) any of them.  They are just one big B-movie villain.

And for me, this made the novel rather disappointing.  It ultimately seemed more pontification than satire.  Satire requires some emotional distance in a writer, some coolness and reflection on the characteristics being satirized, but for whatever reason Crompton here seems genuinely, well, pissed off.  About two-thirds of the way through, when Mr. Elliott visits Marcia to tell her of yet another scandal Miss West has caused, analyzing the villagers’ behavior from the lofty viewpoint of intellectual superiority, I started to feel a bit annoyed by the judge and jury as well as the criminals.  Mr. Elliott's holier-than-thou enlightenment and Marcia's gleeful approval of his critiques started to grate on me.  After all, surely unquestioning self-righteousness is an unattractive characteristic regardless of which side you're on?

That said, though, I actually did enjoy this novel—even if (and yes, maybe even to some extent because) I sometimes wanted to throw it across the room.  I think that’s a testament both to Crompton’s writing, which even in its early, raw form already shows signs of how much better she will become, and to her insight into character.  Although for me she ultimately struck out here due to flat characters and a mean-spirited tone, Leadon Hill just makes me want to track down more of her work.  Her World War II novel, Mrs. Frensham Describes a Circle, has been on my Hopeless Wish List for a while now, but I’ll have to see what other titles I can find.

As a brief addendum (and a SLIGHT SPOILER):

I found the very end of the novel intriguing.  It's not a big dramatic climactic finale with highkicking showgirls or anything, and there's nothing surprising about it, but if you really don't want to know, stop reading now.

Marcia’s husband arrives back home when the major events of the novel are over—after the smoke has cleared, as it were—and Marcia finds it impossible to convince him that the villagers were in the wrong.  He immediately believes that Miss West really was an undesirable type, an “adventuress,” and that Marcia’s sympathy for her stemmed from her foolish good-heartedness and lack of judgment.  She attempts to argue with him, but realizes it is hopeless, and anyway he is more interested in the state of his garden, in which the asters have bloomed unexpectedly:

"I believe you think that that's the most important thing that's happened in Leadon Hill since you went away?"

So, I did wonder: Does this ending suggest that Marcia’s husband, who instantly and irrevocably accepts the verdict of the villagers, is really “one of them” and therefore perhaps not well-suited to Marcia herself?  Or does his ultimate indifference to all the drama—his fundamental lack of concern with all the self-righteousness and hairpulling—indicate just the opposite?

Either way, though, a blithe indifference to self-righteousness would certainly be a handy characteristic for anyone married to Marcia!
Posted by Furrowed Middlebrow at 12:32 AM