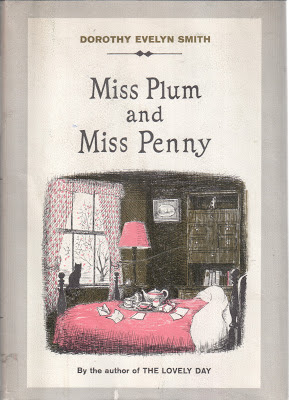 This novel was one of those suggested as "Possibly Persephone" at an event hosted by Persephone Books a year or two ago.  The premise--a middle-aged spinster rescues a young woman from a suicide attempt and then can't get rid of her--immediately seemed intriguing and just dark enough to have an extra kick to it.  A Google search yielded only one fellow blogger discussing the book, and she was lukewarm on it.  And a search for information on Dorothy Evelyn Smith herself yielded nothing at all--no Wikipedia page, no bio in the library's databases, and not a single mention in any of the reference books I have.  I discovered several other novels she had written, from the 1940s to the 1960s, but nothing whatsoever to indicate that a critic had ever given her a second glance.

Which, of course, meant that she was right up my alley.

So I tracked down a nice ex-library hardcover on Amazon, with its charming, cozy-looking dustcover that could have worked nicely for D. E. Stevenson's Miss Buncle's Book.  And I dived right in.

And the result was rather surprising.  I had hoped, in fact, that MPaMP might at least be a sort of pale imitation of Miss Buncle--humor, glimpses of village life, and interesting, vivid characters with problems that could for the most part be blithely laughed off or neatly tied up at the end.  What I found was something much better.  (Better than expected, I mean, not better than Miss Buncle, which is hardly possible!)

If novels can be personified, MPaMP might be described as Miss Buncle's slightly edgier sister--with, perhaps, a spiky hairdo and even an elegant little tattoo, and it got me thinking about "cozy" fiction and writers who might intentionally (or even accidentally) subvert the coziness.  For MPaMP has all the elements of a cozy read.  And yet there's real depth here, and a deliciously dark sensibility lurking just beneath the surface.

Miss Penny is a middle-aged spinster living with her housekeeper, Ada, who has been with her since she was a child.  She is blissfully insulated from disruption, and her romantic instincts seem to be largely satisfied by the recollection of--and annual Christmas card from--her old paramour George, who wanted to marry her and take her to America years before, had Miss Penny's parents not forbidden it.  Whatever other thoughts of romance she indulges in center around her friends Stanley--an obviously gay man whose prissiness is mocked by other characters but viewed with sensitivity by Miss Penny herself (some might find a trace of homophobia here, but I actually found the jokes funny and felt he was portrayed no more or less bitingly than other characters)--and Hubert, a neurotic widowed priest with an alienated teenaged son.

Miss Penny is the classic middlebrow of Nicola Humble's analysis, aspiring to literary culture but in a rather watered-down way, and her reaction to Dylan Thomas's Under Milk Wood is hilarious as well as perhaps representative of her desire to avoid the messiness and drama of life:


Faintly worried, Alison shut the book and laid it on the table.

It was her fault, of course, for not keeping up with the modern trend in poetry.  No doubt Hubert could explain the poem perfectly.  Not, perhaps in too much detail. ... Enough, though, to enable her to enjoy it as a whole, while ignoring confusing passages.

Likewise, she recalls a time in her past when she fantasized about exotic travel:


Once she had been an inveterate collector of travel brochures; pouring over them with pleasure, planning itineraries, doing little sums in margins--even going so far as to obtain a passport containing a horrifying picture of herself looking as if she had just committed a murder and thoroughly enjoyed it.

But ultimately she settled into her routine of going to a coastal resort for two weeks every year.  The same resort, every year.  Settled, too, into a cozy life of routine, village excursions, friends, and the luxury of the gruff but loving Ada's almost parental supervision.  And by the way, this is not the only time in the novel that Miss Penny humorously fantasizes about murder or violence.  The emergence of some kind of repressed passion, perhaps?  Or just a wonderfully dark sense of humor?  You can choose for yourself.


[This sort of fantasized life is also reminiscent of Agatha's preference for fantasy over messy reality in Edith Olivier's The Love-Child, and perhaps even of Lolly's deal with the devil in Sylvia Townsend Warner's Lolly Willowes.  Am I overstretching in seeing portrayals like these as a way for women writers to suggest that, contrary to popular belief about spinsters "missing out" on life, some women might actually choose to lead simpler lives without men or children, like Buddhists choosing to eschew the temptations and pain of worldly ties?  Probably.  But I do like to overstretch...]

At any rate, into this insular life comes the eternally weepy Miss Plum, a young woman who uses her perpetual forlornness as a weapon.  Miss Penny saves her from offing herself in a duck pond, takes her home, and almost immediately begins to regret her decision, since her orderly life is now disrupted by her sense of responsibility for Miss Plum, and since Miss Plum is overly adoring in her gratitude and regularly prone to self-pitying tears.

What's fascinating to me about Miss Plum is that she is so obviously a manipulator, and yet the village folk seem to find her no less difficult to resist as a result.  I don't think this is exaggerated or unrealistic in the novel--beyond the natural comedic level of unrealism, at least.  It might be put down to traditional values of compassion for one's fellow beings, helping the needy, etc.  But it may have just as much to do with keeping up the appearance of those values.

There are certainly indications that Miss Plum's suicide attempt was merely a convenient bit of drama.  Miss Penny ponders this herself, in her own practical, unsentimental way, soon after bringing Miss Plum home:


She thought with dismay of Miss Plum sitting on the bench in the Recreation Ground throughout the long, violent night; all alone, all friendless in the rain and the blowing blackness; completely cut off from human kindness and only a few feet away from the lapping water of the pond.

If I had been going to drown myself, she thought, that is when I should have done it...


And much of the dark humor of the novel revolves around various characters' growing dislike of Miss Plum.  Another hilarious, if rather violent, fantasy of Miss Penny's:

She ate the perfectly poached egg on crisp toast and the creamy milk pudding that Ada provided, took a little nap and woke to indulge in a delicious pipe dream about Miss Plum being kidnaped out of the fish shop by a lot of men with spotted handkerchiefs tied over the lower parts of their faces, and strong American accents; of Miss Plum vanishing mysteriously and irrevocably and never being seen or heard of again.

When Miss Plum actually does disappear later in the novel--not (for better or worse) at the hands of kidnappers-- similarly comments to Hubert:

“I do not anticipate for one moment that Miss Plum has been murdered, though I should have some slight sympathy with her assassin if she had.”

's initial pity for Miss Plum has in fact turned to dislike after she has filtered his heroic self-image through the lens of her pathos:

“You are not boring me at all,” Miss Plum declared with soft insistence.  “I have been alone all my life, and so I can understand better than most folks just what you have suffered.”

glanced at her, startled and a little displeased.

This was not at all the reaction he had expected.  What he had intended as a success story suddenly presented itself in the light of a lament.  Not the clarion note of “Alone I did it,” but the minor pianissimo of “I had to do it all alone”—which was a very different kettle of fish.

Even Hubert, who does, as one would hope from a priest, initially feel compassion for Miss Plum, begins to get testy after a time.  When Miss Penny points out that Miss Plum has tried to kill herself and might again, Hubert replies:

“But not very hard, if I remember correctly.  And unless Miss Plum is a great deal more determined this time, and is, moreover, remarkably handy with a pick, she will find it difficult to drown herself anywhere north of the for several days.  Long before that she will have given up the idea, for she is a woman totally devoid of resource.”

I found this dark humor, and the quandary of folks who want to appear to be generous and compassionate even if they're mostly concerned with their own stable, habitual lives, to be highly entertaining.  But, although there are idyllic scenes of Christmas carolling and of the entire village ice skating on the frozen river (including the wonderful Mrs. Hart, the cook at the local inn, who is suddenly "taken queer" at the first hard freeze and, unable to work, must do nothing but gleefully skate all day long in order to recover), and amusing portrayals of village eccentrics, the overall tone is definitely not quite cozy.

I won't spoil the ending by revealing too much.  Suffice it to say that when Miss Penny's long-lost love suddenly reappears in the village for the first time in 20 years, Miss Penny's habitual calm is further disrupted and the ending, if not exactly a surprise, is nevertheless--for me, anyway--exactly right.  And her final words to Miss Plum are ones that I've wanted to deliver to one or two people myself!

It's not often that I get to add a book to the top shelf of my bookcase, where all of my favorites reside.  So I'm happy that I get to place Miss Plum and Miss Penny "cozily" alongside Miss Buncle's Book.  (No doubt they'll grate on each other's nerves now and then, but that's only to be expected from family!)

Posted by Furrowed Middlebrow at 1:50 PM