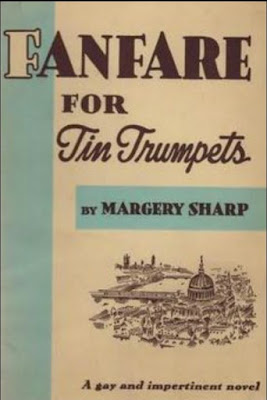 Oh I do let myself be distracted from my good intentions. Months ago I was starting to renew my humble adoration for Margery Sharp, and posted reviews of her lovely debut, Rhododendron Pie (1930), here, and her postwar delight, The Foolish Gentlewoman (1948), here. Then, as far too often happens in my life, I got distracted. But surely there are darned few authors who are more perfect for escaping from these strange times than dear Margery, and I've been fortunate to be able to make enthusiastic escapes recently into two more of her glittering, witty little worlds.

Fanfare for Tin Trumpets (1932) was the follow-up to Rhododendron Pie, which Sharp was rumored to have written in one month while living in a Paddington flat with two other girls. Presumably, she spent a bit longer on Fanfare, but its plot perhaps reflects a bit of her own experience of starting out, as it deals with a young store clerk, Alistair French, who upon the death of his somewhat distant, unaffectionate father takes his small inheritance and escapes from the humdrum to a flat in London with his friend Henry, in order to Write (Sharp doesn't capitalize the word, but one feels that Alistair would have, at least at this stage).

The two friends take cheap lodgings in Paddington (just imagine!) in a boarding-house, whose other inhabitants include the spunky, starstruck Winnie Parker, often accompanied by her army of admirers, and Winnie's mother, who shares Winnie's passion for films if not her admiration for Garbo ("'Olds 'erself like a sack of potatoes," she elaborated. "You'd think she'd be able to buy a pair of stays out of all them 'undreds a week."), and whose vocal cords can make themselves heard anywhere in the house.

Unsurprisingly, Alistair has considerably difficulty getting any actual writing down, what with the many distractions of London. Among other things, Alistair makes the acquaintance of Miss Tibbald, who invites him to join the unfortunately-named Embryo Club, which exists for the purpose of encouraging young writers, but which, on close examination, seems far more discouraging. And then there's the biggest distraction of all—a lovely young actress named Cressida who is determined to marry only in such a way as to further her career.

One thing that jumped out at me, having recently read Francesca Wade's delightful Square Haunting (I'm sure some of you have read it as well?), was a nicely evocative description of Bloomsbury in the very early 1930s:

Henry meanwhile was becoming more and more wrapped up in the life of the Training College, where he had made many interesting friends. They were all rather prominent people, genuine Bloomsburyites as opposed to the brown-baggers who went home every day on the five-twenty-three. Most of them seemed to live round Torrington Square, in which congenial atmosphere they had built up a queer, acutely self-conscious student life of their own, neatly grafted on to a sound middle-class upbringing and centering round one or two cheap Italian restaurants.

[Alistair] envied them because, however they might appear to the detached observer, they did really and truly feel that they were leading a genuine vie de boheme, and therefore enjoyed themselves as much as any one out of Murger. To defend the League of Nations over sixpennyworth of spaghetti left both body and soul in a state of grand complacency, while the reading of Villon in a gallery queue exalted the spirits like new wine. They also had the sort of love affairs in which each party continued to pay for his or her own meals, and often became engaged in their third term. In short, they were for the most part extremely happy, and Alistair had just received his first disillusionment.

Fanfare for Tin Trumpets is surely as rollicking a good time as anything Margery Sharp wrote. One knows everything will work itself out in the end, but one doesn't always know exactly how Sharp will pull it off. It's delightful good fun all round.

And so, in my own humble opinion, is the slightly later Harlequin House (1939). Some readers have claimed that this novel, written just as political tensions were making clear that war was irrevocably on its way, reflects that anxiety (though there's little or no explicit indication) in a slightly darker-than-usual sensibility. I can't say I noticed any such thing, though undoubtedly Sharp was evolving as an author and some of the works which would soon follow Harlequin House, such as Cluny Brown, Brittania Mews, and The Foolish Gentlewoman, would indeed wrestle a bit more with the fact that real life doesn't always provide cheerful happy endings. Some of that evolution might be reflected here, as opposed to the whole-hearted frivolity of Rhododendron Pie and Fanfare, but to me Harlequin House seems as fundamentally joyful and daft as most of Sharp's other early work. 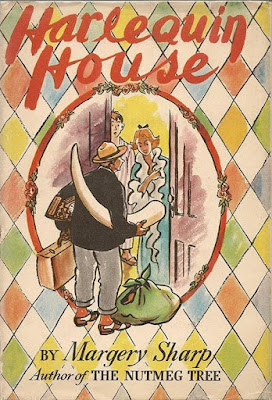 Here, we first meet Arthur Alfred Partridge, a middle-aged widower with a drab job in a twopenny library at Dortmouth Bay, a seaside resort, and a frustrated sense of romance and adventure. On this day, Mr Partridge has spontaneously decided to play hookie, leaving the library closed and going for an idyllic stroll instead. As a result of this seemingly benign but ultimately fateful rebellion against dullness, Mr Partridge meets first the charming Milly Pickering, and then her irresistible niece Lisbeth Campion, who is, when we first see her, "engaged, as usual, in resisting advances".

Lisbeth is, of course, our heroine, in classic Sharp style—kind and generous to a fault, but not one to always take the moral high ground—and it emerges that Lisbeth has greater worries than her numerous suitors. First and foremost she is gravely worried about her wastrel brother Ronny, who has recently been released from prison after six months, charged with peddling cocaine (he thought it was baking powder, really he did!), and has promptly disappeared. Lisbeth determines to find him and help him, but this is complicated by the fact that her rather stern, upright Army fiancé, Captain Hugh Brocard, expected back from India soon, has forbidden her further contact with the disgraced Ronny.

A gloriously implausible but entirely entertaining sequence of events gets Mr Partridge swept up in Lisbeth's unusual and sometimes misguided efforts to find Ronny and get him safely squared away before her fiancé's return. In the process, the three set up makeshift housekeeping in London and work at odd jobs (some of them very odd indeed) to make ends meet. Along the way, they meet an array of odd and wonderful characters, including Lester Hamilton, a charming young man in the film industry, who finds himself helping the trio (and, in particular, Lisbeth) in their increasingly odd adventures. Of course, when Captain Brocard finally does arrive, things reach a climax…

It's all such good fun that one never minds the implausibility, and Lisbeth is a charmer like so many of Sharp's heroines. The passage mentioned above, in which she's resisting advances as per her norm, continues delightfully, and could surely just as easily be describing Julia from The Nutmeg Tree or Cluny Brown in the novel that bears her name:

She was resisting them without harshness. That was the trouble. The earnest young man at her side meant so little to her that she could not even remember his name; she knew only that for the past two days, ever since he arrived, he had been following at her heel with a gun-dog's perseverance and a gun-dog's good manners; and indeed his whole personality was so amiably canine that Lisbeth could not help feeling it was not his fault: someone had trained him to do it. (In a sense she was right, the trainer being simply the Life Force, or—more classically—Venus Urania, or—more familiarly—Mother Nature. Lisbeth took up a great deal of the Life Force's attention.)

Who could care that Sharp's heroines have much in common when they're as entertaining as that? And both of these novels are packed with Margery Sharp's quintessential joie de vivre, and have proven to be powerful antidotes to the doldrums of a drab and depressing pandemic summer!

Posted by Furrowed Middlebrow at 2:06 PM