It's almost time! Back in May, I announced our six new "cheerful village comedies" to help alleviate coronavirus and other stresses (well, originally planned to be happy, page-turning holiday reads for the summer, but now more likely to be used as antidotes to the news and to thoughts of cancelled summer travels). And now they're finally here, as of August 3. To tantalize you just a bit more in these final days of waiting, I'm revealing the full covers (complete with cover blurbs extensively agonized over by yours truly, who always makes very heavy weather of them indeed). I also have to mention our brilliant intro writers, as I neglected to do before. 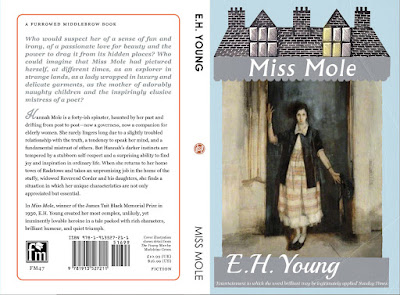 First up, for the incomparable Miss Mole, we have a lovely new introduction by author and novelist Charlotte Moore, who has introduced other of our books, including Romilly Cavan's Beneath the Visiting Moon and E. Nesbit's The Lark. She has a marvelous way of summing up what makes a novel special, as in this brief excerpt:

Her sense of place is impeccable, her seasonal details exactly right. She knows for certain what her characters wore and ate, how they walked and talked. You won't get anywhere with this novel if you don't respond to Hannah - but who could fail to feel sympathetic interest in "a woman for whom repentance had no practical results"? 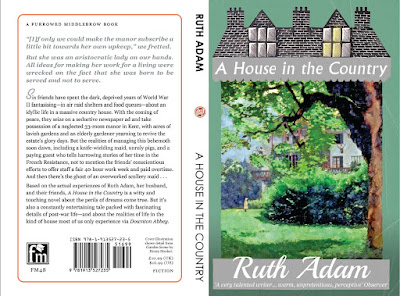 Next is the wonderful Ruth Adam and her humorously autobiographical A House in the Country. Adam always reveals—even when making us laugh—a keen social awareness, as she did in her most famous work, her second novel I'm Not Complaining, which was reprinted in the 80s by Virago. It's only fitting, then, that her intro should be by journalist Yvonne Roberts, who brings her own incisive social consciousness to the intro and gives us some irresistible peaks at the reality behind Adam's novel. If her summing up of the house in question doesn't pull you in, nothing will:

The house is in Kent built in Tudor times by Flemish weavers with the curved gables of their homeland. It has 33 rooms, a resident bat, a temperamental insatiable geriatric boiler and five kitchens. It is home to lilacs and roses and swallows in the stable. Over the years, its powers of seduction ensnare not just the small band of Londoners but also a succession of domestic staff, weekend visitors, foreign paying guests and tenants. The whole is presided over by the magnificent figure of Howard, the head gardener. 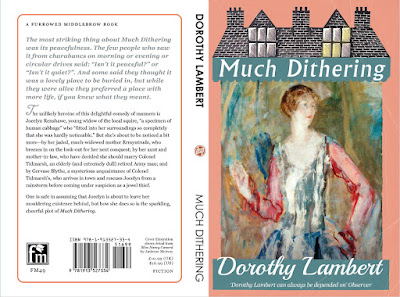 Now we come to Dorothy Lambert's frothy, funny Much Dithering, which is not only the title and a fair description of what goes on in the story, at least among some of the characters, but also, delightfully, the name of the village in which it all happens. Scholar and researcher Elizabeth Crawford is our go-to introducer for our least-known authors, and she never fails to find delicious tidbits (as when she was able to quote from Elizabeth Fair's unpublished diaries, or when she has enriched our readings of previously lost authors like Marjorie Wilenski or Barbara Beauchamp by unearthing hitherto unknown details of their lives and histories). We really put Elizabeth to work this time around, writing intros for all four of our remaining new titles, and she didn't let us down. It's amazing what she has unearthed about Dorothy Lambert, and not only that, she was able to trace the origins of some of Much Dithering's most notable characters in a Christmas play written by Lambert four years earlier! 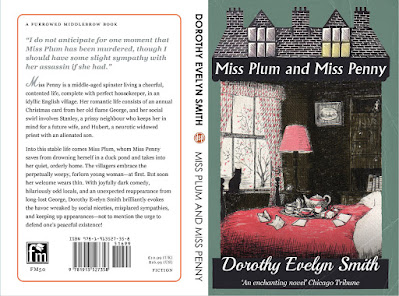 I don't like to play favorites with our books, since all of them are by definition favorites or we wouldn't be reprinting them, but Dorothy Evelyn Smith's Miss Plum and Miss Penny might have to be an exception. One of my earliest "discoveries" as a blogger (though obviously some savvy soul had discovered it before me since it had already been suggested as "possibly Persephone" at one of that publisher's events—happily for me, they didn't pick up on the suggestion!), it will always hold a special place in my heart. And Elizabeth Crawford again uncovers fascinating details about this rather private author, and I can't resist sharing this wonderful summation of the novel's characters via a tidbit about Smith herself:

Dorothy Evelyn Smith does not seem ever to have been interviewed by the press and, 50 years after her death, family memories are fading. But recollections that survive are of a woman who, besides listening to and making music, loved reading poetry, in particular Dylan Thomas’ 1954 publication, Under Milkwood. Knowing this, we can derive added pleasure as we encounter Alison Penny reading it at intervals throughout the novel, ‘faintly worried’ by some of the ‘confusing passages’. ‘It was rather more outspoken than she had bargained for...So very Welsh.’ Sly Miss Plum confesses to have been reading the book in bed, the implication being that no passages would have confused her. 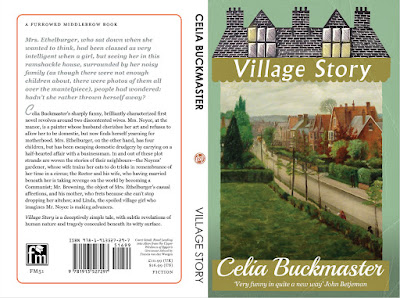 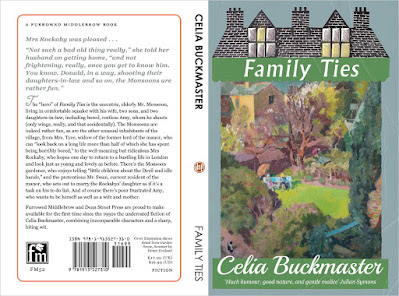 Finally, we have another author I stumbed across early on, Celia Buckmaster, and her two delightful comedies with a bit of an edge, Village Story and Family Ties. In her research for these intros, Elizabeth was able to track down no lesser source than Buckmaster's daughter, Loulou Brown, who provides wonderful insights into her mother's work and life, but also revealed (bestill my pounding heart) that the family possesses the manuscript of an unpublished third novel! Music to my ears, of course, and if the world ever returns to any semblance of normal, we hope to have a look at the manuscript and see what's what.

And that's all for this slightly smaller batch of new titles, but hopefully enough to keep you happily thinking for some time of eccentric village life with no trace of COVID anywhere!

And I just can't resist noting that we have, just this week, finalized plans for our next batch of titles, coming in January 2021, and oh boy! I can't reveal them yet, but I can say that I'm perhaps more excited than I've ever been before. Eleven titles, two authors, both new to our list—I can say no more, but stay tuned…

Posted by Furrowed Middlebrow at 4:12 PM