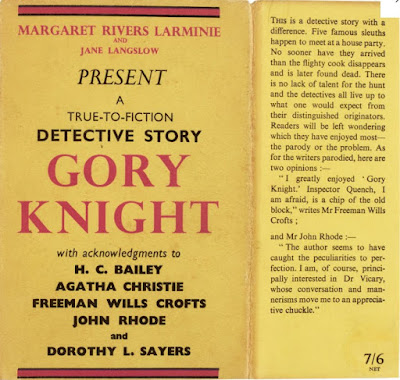 M. Pommeau lifted a protesting hand. "Say no more, madame, I beg. It is that your hospitality would be ill-paid if Hippolyte Pommeau could sit warming the hands while a young female remains so curiously absent. And since your friend the Professor is so good as to offer his help also, we will now knock our heads together, as your English idiom goes, and see what happens."

Oh, what fun it is to write this post! If you're the type of reader, as I am, who happens across a random mention of a book, adds it to your immense TBR list, and then can't stop thinking about it until you manage to get your grubby hands on it, you will know that for every instance in which this sort of determination pays off, there are a fair number of times when the result is a mere "ho-hum" or even an unfortunate "ugh". So when it turns out to be an "by jove, yes!" instance, there is much to celebrate. 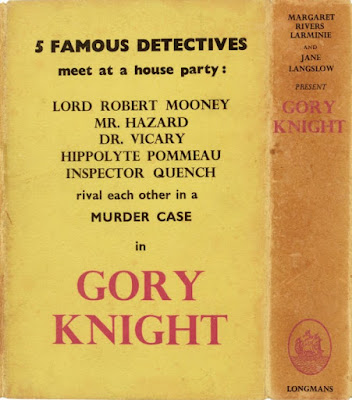 I don't have a record of when I first came across Gory Knight, though I know I mentioned it in an update post as early as 2016. I found an early reference to it as a parody of the "round robin" mystery stories that were popular at the time (though in retrospect this seems inaccurate, according to my understanding of a "round robin" as one of those books—i.e. The Floating Admiral—in which well-known writers each contribute a chapter to a novel and hope for the best). It sounded mildly intriguing, as I do love a humorous mystery. But it wasn't until I came across an article by the estimable Martin Edwards—who in addition to numerous other achievements is also a consultant on the marvelous British Library Crime Classics series—describing his research into the authorship of Gory Knight with the assistance of acclaimed crime writer Margaret Yorke, herself a relation of one of the book's authors, Margaret Rivers Larminie, that I became truly fixated on it. His article (see here) is largely about their research into the identity of the second author, Jane Langslow, who might well, they conclude, have been novelist Maud Diver, a half-sister of Larminie's. But he does report on his and Yorke's conclusions about the book as highly entertaining, if imperfect, which was enough to fuel my fire.

But of course, since then, the book has had to languish on my Hopeless Wish List. As of this writing, two copies of the book are actually available on Abe Books, the cheapest (??) at the bargain price of just under $500, and it's in exactly one North American library, non-circulating, and as I haven't made it to Tucson recently it might as well have been Timbuktu. It was a lost cause.

Until, of course, our recent excursion to the paradise of the British Library and the Bodleian… Thank heavens I remembered to add it to my list of requests!

And how delightful it is to report that once I started reading it, a stampeding herd of buffalo couldn't have got it away from me. It's ludicrous and over the top, and as a mystery per se it's undoubtedly no great shakes, but what it is is wonderfully entertaining and giggle-inducing.

I wouldn't call the book a "round robin", as I mentioned above, though of course it does have two authors. Rather, it's the tale of the unlikely congregation of parody versions of four of the world's most famous detectives (cameo by a fifth near the end) at a classic country house weekend. As such, it's reminiscent of (or, more accurately, anticipates) Neil Simon's gloriously silly, star-studded 1976 film Murder by Death, an old favorite of mine, however silly it may be (and despite some glaring racial insensitivity in the fictional version of Charlie Chan).

It comes about like this: During a discussion on detection, poor Miss Pyke, a classic elderly spinster, carelessly asserts to her gathered nieces and nephews how wonderful it would be to meet and pick the brain of a great detective. Later that evening, she is sworn to secrecy, in turn, by no fewer than three of said family members, each determined to surprise the rest by bringing just such a detective for a weekend visit the following week. After which, Miss Pyke herself, worried that her remaining nephew will be the only guest without a detective to show off, suggests that he invite one too. Of course, as we all do, they already have the world's great detectives in their contacts list, and all are successful in snagging their detective for the following weekend. (Improbable, yes, but to be fair, how could a meeting of these masterminds come about in a probable way, and if they didn't get together what fun we would miss!)

Naturally, the night of the detectives' arrival just happens to be the night when Miss Pyke's cook, the eponymous Miss Knight, disappears from the kitchen just when her services are most crucial, and the ongoing lack of any trace of her begins to seem ominous. The rather pompous French detective Hippolute Pomeau, the elite Lord Robert Mooney and his formidable manservant Bunyan, the strictly fact-based Dr. Vicary, and the comically sluggish Archie Hazard must, obviously, offer their services. (Pomeau and Mooney are instantly recognizable, of course, as thinly-veiled versions of Poirot and Peter Wimsey. Depending on your knowledge of classic mysteries, you may—or may not, as I did not—recognize John Rhode's Dr. Priestly and E. C. Bentley's Reggie Fortune in the other two sleuths. And if you're a Freeman Wills Croft fan, the arrival, just at the end of the novel, of Inspector Quench will be an added pleasure.)

I can't say very much about the plot without risk of spoilers, but I can give a couple of examples of the dialogue, exaggerated but hilarious as it is. Certainly, I found Pomeau and Mooney the most entertaining, perhaps because I'm familiar enough with the characters to get the jokes, but the others have their moments as well. On the detectives working together, the unforgettable Poirot, er, I mean Pommeau:

"It is not that I must deprive my English colleagues of the spectacle of Hippolyte Pommeau in the midst of his element. Indeed, it is conceivable that one of them shall discern some little discrepancy of evidence that I overlook." He glanced about with a smile which betrayed his incredulity of such an occurrence.

And second, a highly giggle-inducing quip from Lord Robert about their efforts to uncover information about the missing cook:

At which point Dr. Vicary modestly implied that if he himself had had the private and uninterrupted handling of the said witnesses, the withheld portion would long ago have come to light.

It's almost unfathomable that this book remains out of print after all the flurry of rediscoveries of worthy Golden Age mysteries in the past few years. It has its flaws, to be sure, and hardcore puzzlers will find the solution here tame at best. But with the massive followings that Agatha Christie and Dorothy L. Sayers, in particular, have, and the popularity of humorous crime stories, surely lots of readers would enjoy these daft caricatures of favorite characters. I wonder if the lingering uncertainty about the identity of Langslow is the culprit, or if something else is to blame, but if someone doesn't get it in print soon, the British Library (and perhaps Tucson, Arizona) is likely to be overrun with eager readers.

Perhaps we should look into it more closely…

Posted by Furrowed Middlebrow at 9:25 AM