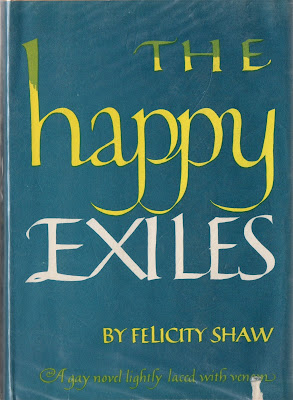 Where Eleanor led, sooner or later others followed and, from that hour, Sophie became part of the normal social scene, or rather, of the most exclusive corner of it; for when the invitations began to filter in, it was soon found that only a very few of them were ever accepted. The very people who had been loudest in disclaiming their intention ever to set foot in her house soon made the mortifying discovery that there was little danger of their being asked to do so.

As some of you will know from Dean Street Press’s recent reprints, Felicity Shaw is much more widely known as Anne Morice, author of more than two dozen mysteries, most featuring her actress sleuth Tess Crichton. Years before she kicked off her highly successful career as a mistress of murder, however, Shaw published two early novels which stemmed from her own life as the wife of a British documentary filmmaker and “visual aid expert” for UNESCO who traveled extensively in the British colonies during and after WWII. With this bit of background, I realize how perfectly positioned Shaw must have been--witnessing the life of foreign service personnel and the sometimes ludicrous administration of the colonies, without however being part of it, and therefore not dependent on pleasing or being liked by the local authorities--to write The Happy Exiles, a very charming and funny, sharp-witted social comedy set in an unspecified colonial outpost (somewhere with a warm climate, not Africa, so presumably Middle East or Asia).

After a slightly sluggish beginning, largely from the viewpoint of Judy, a rather shallow young woman staying with family friends Margaret and Harry Fordson for a few months in a nice warm climate following a bad bout of influenza and an even worse heartbreak, things pick up quickly with the introduction of Sophie Lefroy. Sophie is the source of some uncomfortable scandal within the insular community, as she is a married woman, of independent means, whose husband is conveniently and apparently permanently absent but who is happily engaged in longstanding extramarital activities with the colony’s Chief Secretary, Tom Langley, who may well also be the father of her several children. Although many in the colony initially swore to snub Sophie for her scandalous behavior, her acceptance by Eleanor Cross, a mover-and-shaker in the community (who periodically seethes with rage and frustration at her situation and her husband in particularly but carefully manages everyone anyway), leads to her grudging acceptance, a fact to which Sophie is delightfully indifferent:

Some decided to cut Mrs. Lefroy whenever an opportunity should present itself, but this turned out not to be very often and, on the rare occasions when they did come face to face, they were never certain that she had recognized them.

We meet various other members of this more or less closed community, and witness the gossip and spying and manuevering for position. Into this group comes a new couple, Alan and Daphne Roberts, the latter a rather dense and “not out of the top drawer” but ambitious young woman ready to use her looks to benefit her husband’s career, but also at risk of sabotaging it with her temper and inferiority complex. As the novel progresses, we are also introduced to Robin McClelland, a spirited young man who is invited to a party at the Chief Secretary’s in a case of mistaken identity by Tom’s under-utilized and somewhat bungling secretary, and Simon Cornelius, a fairly clearly gay friend of Sophie’s who just might also be a sort of incognito spy whose report on local colonial doings may have lasting impacts. More romance, scandal, and outrage follow. 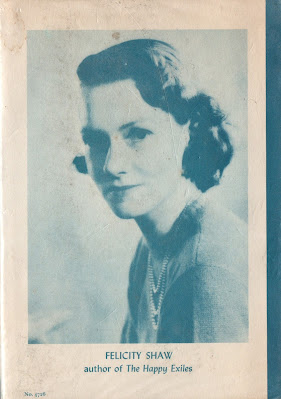 I found it all completely addictive and delightful. I’m not totally unconflicted about it, because colonial life, from the perspective of the colonialists, is not the most relatable subject matter these days. Shaw is clearly making light of the bizarre circumstances of colonial life and critiquing many of its absurdities. Even the slightly oblivious Judy ponders amusingly on this in her diary one evening:

The Governor was there with Lady Digby. It was an honor because he hardly ever goes to private parties. Everyone calls him H.E., even his wife. I was introduced to them both and she was charming to me. She told me that they have a daughter of about my age, but she is in England now, training to be an air hostess. I couldn't help being struck by the funny side of this, because, out here, the Digbys are treated more or less like royalty. Perhaps one of her father's "subjects" may one day be ringing for her to bring him a glass of lemonade.

And Shaw certainly has fun highlighting the officiousness of the local society, as in these two passages from a sewing club meant to improve relations between the British and native staff and their wives:

They met every Friday afternoon in Eleanor's drawing room, and the conversation was always conducted in English. This was considered to be good practice for the foreigners, and it was certainly more convenient for everyone else. Although some of the British wives spoke the native language quite fluently, many of them were unable to do so in any but the imperative mood. As the visitors could only  understand the most slowly delivered and simple phrases in English, there was no curb on conversation.

Immediately after that, tea was brought in and all was confusion and bustle. It was served in accordance with local custom, for the convenience of the native visitors, whose tastes were always carefully deferred to in matters of no importance at all.

Even so, Shaw is also “of her time” in her willingness to indulge in some mild stereotyping--the native servant who humorously holds any other native visitor to the house in utter contempt, or Daphne’s lackluster servant who only needs Margaret’s stern bossiness to fly into action and become happily contented again--and she casually notes that Judy is as constitutionally incapable of falling in love with a married man as with a “man with colored skin”. None of it is any worse (or even as bad) as Lawrence Durrell or Evelyn Waugh however, of both of whom this novel occasionally reminded me.

Indeed, my overarching feeling about the book is just that it’s quite funny. For example, Tom’s bureaucracy-addicted secretary, Miss Plum, could surely come straight out of Waugh:

It was disappointing, in these circumstances, to realize as she was often forced to do, that her singular talent was being allowed to wither away from sheer inanition. Things had never been the same since Mr. Langley took over the reins. He simply would not, or could not, play the game according to the established rules. His methods were completely unorthodox. When he had an important letter to send, he dictated it in the form in which he desired it to be written, and he became quite impatient with Miss Plum if, in her attempts to infuse a little ambiguity, she altered a word or two here and there. When he wished to speak to one of his colleagues, he was not above taking the telephone in his hand, making the connection and saying what he had to say in the fewest and plainest of words. The thing was done in five minutes which might, by the judicious use of the proper channels, have been stretched into three days.

And the scene which probably made me giggle the most is one in which a delegation is invited to a reception on a Navy ship and must board a launch in the midst of rough seas:

[H]e proceeded still further to damp their downcast spirits by telling them that the forecast showed an improvement and that there would be no danger, only some discomfort, in making the trip out to the ship. He seemed to feel that none of them would be deterred by this, though he did throw in a casual warning about the difficulty that any lady wearing high heels might encounter in the smooth transfer of her person from the launch to the ladder. He concluded by saying that the first launch was now ready to leave. As every lady, with only a single exception, had put on high-heeled shoes, there was naturally a little hanging back, but of course it was not a challenge that could be refused. Not for nothing were they empire builders of the island race, and besides they spent so much of their leisure in going to the most abominable parties that the added risk of drowning, being seasick, or making spectacles of themselves did not daunt them as much as might have been expected.

At any rate, I have Shaw’s second novel, Sun Trap, sitting on my TBR now, and I doubt I’ll be able to resist it for long. Here’s hoping it’s as much fun as this one was!
Posted by Furrowed Middlebrow at 7:28 AM