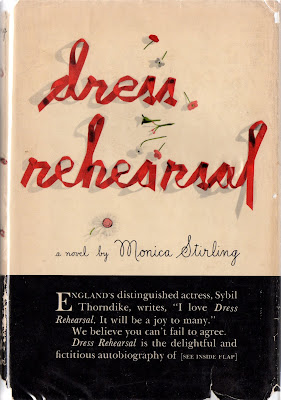 Stiff upper lips are not usually encouraged in actors' children: they deform the face and suit only a limited range of parts. So when, at eight years old, I set out for an English boarding school, my face was as revealing as that of Eleonora Duse—whom I unfortunately resembled in no other respect.

I seem to be on quite a little Monica Stirling reading kick these days, and this is, if not the most elegant and fully-developed of her novels, certainly a favorite for its subject matter and cheerful good humor. Stirling is not generally a hilarious writer, though she is always witty, but writing about her school days (the publisher simultaneously tells us the book is not at all autobiographical and that it clearly reflects in most details Stirling’s own upbringing) apparently brought out her playfulness.

Jocelyn Melisande Julie Scott is (like Stirling) the daughter of actor parents, and has spent her early childhood traveling about the Continent, educated in a catch-as-catch-can way by various short-serving mentors brought in now and again by her parents when they fear she is growing up “simply heathen.” She has seen it all, including some amusing theatre tales that surely stem from Stirling’s own recollections:

After all, it hadn't been half as bad as that time in Marseilles when they forgot to put the telephone on the stage and, as the bell rang and the unfortunate actress looked round, a hairy arm passed the telephone through the nearest window. Nor as bad as that time in Germany when a local pianist, engaged to play off-stage for the unmusical actor portraying Wagner, was so overcome by zeal that he started playing, fortissimo, well before the appalled actor could get to the piano.

But when Jocelyn is seven and her distinctly theatrical sister Henriette is five, when their parents are both uncharacteristically stationary in long-running London productions, the sisters are sent to boarding-school. Following after their bohemian early years, the transition is, not surprisingly, a bumpy one, and it’s the bumps that are the central focus of Dress Rehearsal.

We meet the kind headmistress of Heath Towers, Miss Whiting, and a startlingly gung-ho Matron. We meet Jocelyn’s entertaining but rather vague school friends (one wonders if Stirling didn’t fully recall her actual childhood friends, or if she just didn’t want to alienate them by recalling too much). And, most significantly, we meet Jocelyn’s arch-nemesis, the officious but perhaps slightly tragic Miss Willis, whose antipathy Jocelyn’s unconventional upbringing and continental ways particularly arouse.

The novel is somewhat episodic in structure. There’s the time the girls, learning about politics and government, are inadvertently taken to a meeting of British fascists (after which Jocelyn gives her week's allowance to join the Anti-Fascist League). And there’s the time (most entertaining if you’re a wee bit familiar with classic French literature) when Jocelyn gets permission for the girls to attend the rather scandalous La Dame aux Camélias by Alexandre Dumas fils as being educationally relevant because they’ve been studying The Three Musketeers (by Dumas père), and even the headmistress can’t punish her without admitting that they didn’t realize the difference. Then there’s the senior, about to be expelled for sneaking off to meet a boy, who escorts Jocelyn a bit further down “the primrose path” while they’re both stuck in the infirmary together. 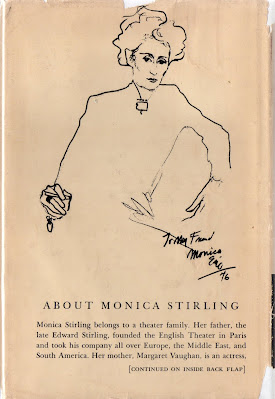 It’s all delightfully good fun, and gives a slightly different perspective than gung-ho school stories on what life in an English boarding-school circa the 1930s must have been like. Stirling clearly makes light of such stories when Jocelyn first arrives at Heath Towers and is shown around by a walking stereotype:

Rosemary was much older than I was. Twelve if she was a day. She had a big face the color of the moon at night and red knuckles and she told me I was awfully lucky for a new bug as I was in a simply ripping dorm with a simply topping set.

Surely she has tongue a bit in cheek too when describing how the girls’ were warned about romantic relationships:

Quiet Talks were to Heath Towers what Fireside Chats are to America and Sentimental Friendships played in the former the ambiguously dangerous role assigned to Russia in the latter--showing indulgence towards them was definitely an un-Heath Towers activity.

This is mostly a grownup school story—a favorite genre I haven’t written about a lot recently, so I’m happy to get back to it—but there are glimmers here and there of the European unrest which would soon rock even the smug world of Heath Towers. It ends with Jocelyn, having finished school, just on the cusp of romance with a journalist on his way to cover the Spanish Civil War. We can only wonder at what Jocelyn will encounter in the coming years, but we do get a glimpse of the fate of Heath Towers itself:

And from the moment Matron opened my trunk the school buildings seemed to me to shrink. I didn't guess how much smaller they would seem nearly twenty years later when a chance drive through Heatherton showed me their empty shell standing alone in a bombed avenue marked Men At Work, but they already looked remarkably unlike the impressive mansion I'd entered years ago with my hand in Mamma's.

Happily, my copy of Dress Rehearsal came complete with an intact dustjacket, which gives me more information than I had hitherto been able to find about Stirling. And quite interesting that the book warranted an intro from the likes of Colette in its French edition!

Because I'm such a giver, here's the complete bio:

Monica Stirling belongs to a theater family. Her father, the late Edward Stirling, founded the English Theater in Paris and took his company all over Europe, the Middle East, and South America. Her mother, Margaret Vaughan, is an actress, and her sister, Pamela, who trained in Louis Jouvet's class at the Paris Conservatoire, was the first English actress to be admitted into the Comédie-Française company.

Miss Stirling started writing during the war and was encouraged by Edward Weeks, of the Atlantic Monthly, who bought her first stories. In I944 the Atlantic sent her home to France as their war correspondent. A Metro-Goldwyn-Mayer grant enabled her to go to Italy where she wrote her first novel, Lovers Aren't Company, which was translated into Italian and Danish. She has had stories published in the Atlantic Monthly, Harper's Bazaar, New Story, Glamour, Life and Letters, House and Garden, Argosy, The Evening Standard, and The New Yorker.

Dress Rehearsal is her second novel and is being published simultaneously in a French edition with an introductory foreword by Colette.

Posted by Furrowed Middlebrow at 8:19 AM