A felicitous Provincial Lady-ish find: MAUD BATCHELOR, The Woman of the House (1934)

Perusing eBay seems to have become one of my ways of coping with social isolation. It all started with coming across a seller who had lots of titles from the 1950s, complete with scans of covers and front flaps, which are interesting and helpful in discovering what types of books an author actually wrote. I found lots of great information, which I haven't quite had a chance to process for my list yet. But of course such perusing has inevitably led to a few purchases…

In the case of The Woman of the House, there wasn't even a cover or flap to judge by, only a pic in which the seller was trying to show the book's condition but happened to include most of a page of text. And those few lines of text were too tantalizing for me to resist. Thankfully.

It seems pretty likely that The Woman of the House was at least somewhat inspired by E. M. Delafield's success with her Provincial Lady novels—some of my favorites of all time—of which the first two had already appeared by the time Batchelor's book was published in 1934. Here, however, we have a distinctly non-provincial lady, a clearly rather well-to-do London lady in fact, though her problems are often similar to those of her provincial counterpart. 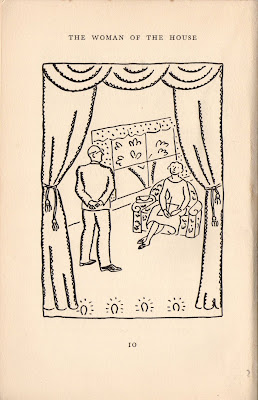 In the opening pages, our narrator introduces us to her family, her husband Philip and her five children—Sholto, Douglas, Bruce, Patricia, and Dorcas. But once they're all introduced, the children are thereafter discussed only by their nicknames, Soup-plates, Binkie, Toodles, Patch, and, well, Dorcas, whose name suits her so perfectly that she was never given a nickname.

Who are Patricia and Bruce? I ask myself. Oh, yes, of course. Patch and Toodles. For I find it useless trying to remember each child by two names.

Philip is generally known as Pop, and our narrator, whose real name is never given (unless I've got delirious from too much coronavirus news and missed it), is known as Squib, "because I sometimes go off like one". And this is not to mention their cook, Splodge, whose nickname is a secret and who would not take kindly to its use. 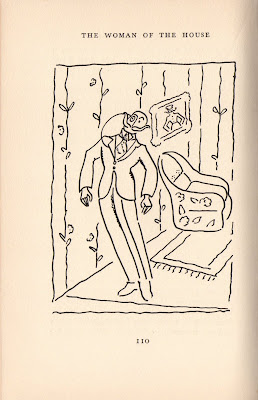 Some readers might find the nicknames a bit cutesy but I thought them amusing, particularly since Soup-plates is already happily married, and Binkie and Toodles are beginning careers as musical comedy composers, so they're clearly all grown up. Dorcas, too, the responsible stay-at-home daughter, is clearly of age. Only Patch is still a minor, it seems, as she is sent off to boarding-school in the course of the novel, feeling devastated and unwanted at first only to quickly become a deity to many of the younger girls of her school, a role she seems to find perfectly comfortable.

The book begins with (and indeed perhaps results from) Squib's decision to take breakfast in her room each morning instead of with her family, so that she may have one precious hour to herself for her writing. Of course, this decision has repercussions, among which is that everyone seems to view it as an opportunity to come to her room and share their problems. But apparently she gets some time to herself, because her book gets itself written, and includes a memorable dinner party, the mixed feelings with which the marketable talents of Binkie and Toodles are greeted, Squib's visit to her elderly aunts (during which time her cook and maid become fed up with the children and leave), and the taking in of a paying guest, a young woman who collects and studies small animals, including a snake with a knack for escaping her room. Among other things.

Batchelor's style is not often as laugh-out-loud funny as Delafield's, though there are a few exceptions. But it has a charm of its own. While the Provincial Lady is often at her best pointing out the indifference and lack of appreciation with which she is treated by her family, and her awkwardness in social situations, Squib has a bit more sang-froid and she gets to devote a fair bit of time to her family's successes and her own practical handling of challenging predicaments. Though there are here and there some moments when she might be the PL herself, as when a neighbor broaches the subject of taking in a paying guest:

"Well," said Mrs. James Reade, "that's that. Daisy will soon start another hare." And then she asked me what I was going to do with so much space on my upper story.

For a wild moment I thought she was referring to my want of intellect, and was inclined to be huffy, but she meant the three rooms occupied recently by Patch, Binkie, and Toodles.

It's all prone to be a bit silly, which was, let's face it, exactly what I needed right now. In fact, since I can't very well share the entire novel with you right away, I am taking the liberty of sharing a couple of representative pages with you here. If you click on the image, you should be able to make it large enough to read the text. 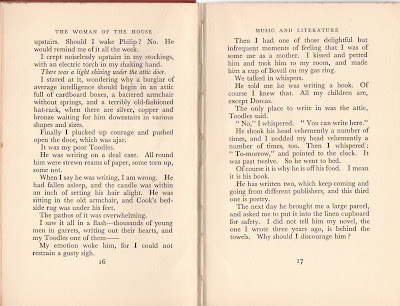 One may not find as many passages here relevent to the plight of the middle class married woman attempting to have an intellectual and cultural life of her own as one does in Delafield's work. But if one has read the PL novels umpteen times and yearns for something similar and not quite so well-trodden, one could do much worse than The Woman of the House.

Sadly, unless she published other work under a pseudonym, this appears to be Maud Batchelor's one and only novel. I rather wish she had kept on, telling us more about her own exploits and those of her children—particularly the irresistible Binkie and Toodles. And I am intrigued by Squib's mention, in those pages I'm sharing, of a novel she had written three years earlier. Does that mean there's more Batchelor out there somewhere, in a grandchild's attic?

Batchelor, by the way, far from being a provincial lady, seems to have been a genuine London "Lady", according to a copyright entry. Lady Batchelor was apparently née Batty, but I've not got further with her than that.

I should also mention that the illustrations by Thea Doniach are simple but charming, and often complement the text amusingly.

If my other eBay finds, currently winging their way across the Atlantic (however sluggishly in COVID-19 time), turn out to be as charming as this one, I will consider them a great success!

Hope you're all staying mentally and physically well in your isolation. I heard from a kind reader the other day with a home on Dartmoor, and I thought how lovely it would be to be isolating somewhere with lovely open air instead of the San Francisco streets (however deserted they for the most part are—there have been numerous coyote sightings in the city as they begin to assume the streets now belong to them). Oh for a wander in the lovely English countryside now! 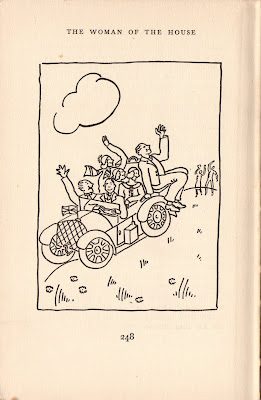 Posted by Furrowed Middlebrow at 2:48 PM