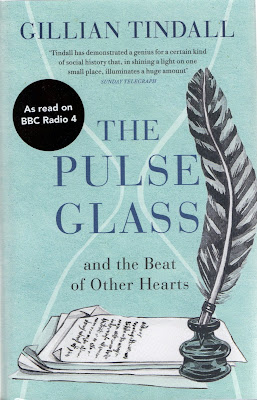 I have a whole slew of recent reading I need to catch up on here—something like two dozen books altogether, and some of them quite interesting (though some will have to be mentioned only briefly as my notes haven't always been all they might have been). But before I do that, I can't delay in writing about a wonderful book I just finished, and a brand new one to boot. Me reading a book hot off the presses? Unheard of!

Many of you will recall that Tindall is—as well as one of the foremost history writers in the world today (and, earlier in her career, a successful novelist as well and therefore included in my author list)—also the daughter of Ursula Orange, author of three novels reprinted as Furrowed Middlebrow titles, and the niece of Monica Tindall, author of another FM title. She also surely has the most seductive approach to historical writing I could imagine—such that even if you think you're not really "into" history, you really owe it to yourself to give her work a try. I couldn't put The Pulse Glass down and finished it in two days (it would certainly have been one if not for that dratted dying computer). 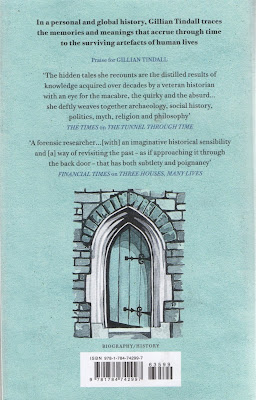 I first read and became a fan of Gillian's when she emailed me after I'd written about her mother's books, but as soon as I picked up Three Houses, Many Lives (2012) and, a bit later, Footprints in Paris (2009), I was hooked. Her focus, as she herself described it, is on the study of place and urban history, but that hardly does justice to the scope and elegance of her work. The Pulse Glass, for example, has four epigraphs—one from the periodical History Today, one from a poem by Polish Nobel Prize winner Wislawa Szymborska, one from children’s author Philippa Pearce, and one from Proust—which might just begin to suggest the varied sensibility and array of learning Tindall brings to her work.

The book begins on a somber note, as Tindall scatters her brother’s ashes along a disused railway line. This leads to meditations on the perishability of both people and objects, and on the randomness with which some objects manage, often by pure happenstance, to survive their inevitable contemporary irrelevance before taking on new, richer meanings for later generations. It's difficult to find a snippet from the book that can really give a sense of the power of the connections Tindall makes between personal events, objects, and history, but this passage gives a hint of the random survivals which particularly fascinate her and in turn make the book so riveting:

Let enough time pass and any written missive from the world that has vanished becomes precious. How glad a museum would now be to receive a medieval shopping or laundry list! And glad they are when some unexpected windfall comes their way. About a dozen years after the beginning of the present century, someone doing repairs to a wall in Corpus Christi College, Oxford, noticed that a tightly folded paper had at some point been stuffed into a crack between stones, presumably to keep out a draft, and had subsequently been plastered and painted over. When the paper was retrieved and deciphered, it turned out to be a fragment of a musical score by Thomas Tallis, complete with words, from a special service held in St. Paul's for Henry VIII in 1544, two years before his death. It is known that the service was arranged by Catherine Parr, the final wife who survived the much-married kind, and it is thought that the words may be by her. With similar serendipity, two much-folded sheets of paper were found lining the spine of a seventeenth-century book in the printing and publishing archive of Reading University. The sheets had apparently been used to reinforce the binding, and turned out to be from one of the first books printed in England by Caxton's press—a priest's handbook, dating frtom 1476-7. An interesting example of a printed page being, for once, more significant than a handwritten one.

Papers so unvalued that they are reused for bindings are clearly a fruitful source for lost writings, for in 2018 the Vice-Chancellor of Northumbria University, while rummaging in Cambridge University Library, made a similar find. As part of the backing of another manuscript, and divided into several different scraps, he discovered the score of a lost Christmas carol that had been sung in his own district in the early fifteenth century—'Parit virgo filium'. So, after five hundred and fifty years, the mute carol proclaiming a virgin bearing a son was given voice again in Newcastle Cathedral.

From its melancholy opening pages, The Pulse Glass proceeds with interlinking discussions of the blooming and wilting of railway lines, and the surprising afterlife of some disused stations; the enormously unlikely survival of a medieval Latin gospel; the centuries-old letters of several prominent families; rediscovered treasure from the attics of Westminster Abbey, which connect up with the intriguing vicissitudes of a small ivory figure of Christ that sits on Tindall’s bookcase; and the sometimes misguided urban "renewal" of London. That's just to name a few. And her tale touches on such disparate topics as the English Civil War, Richard III and the Princes in the Tower, Rudyard Kipling, and Florence Nightingale, as well as compelling details of Tindall's own family, earlier books, and the house in London in which she's lived for half a century.

The book ends, too, on a personal note. The second-to-last chapter sheds charming light on Gillian's aunt, Monica Tindall, author of The Late Mrs Prioleau, one of my favorites of the Furrowed Middlebrow reprints. And in the final chapter, she offers her most thorough and heartbreaking discussion of her mother, Ursula Orange, and of Ursula’s suicide. I read this chapter with tears in my eyes and that little quiver that comes from real life poured elegantly, measuredly into great writing. 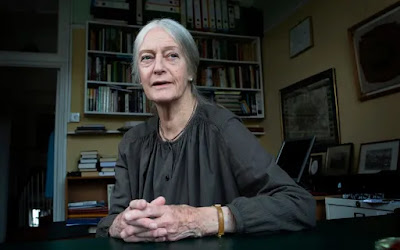 On our recent vacation, I largely took a vacation from blog reading as well. One of the utterly non-blog-related books I read was Flights, by Olga Tokarczuk, who was awarded the 2018 Nobel Prize just a few days before we set out (I had bought the book at least a couple of weeks before the announcement, so I was in the unusual position of being right on point). I loved Flights, with its unusual and lovely weaving together of disparate stories into what must be called a novel, even if it resembles few novels before it. Tokarczuk also reminded me of another contemporary author I love, W. G. Sebald, whose haunting, melancholy novels are among my favorites.

Reading The Pulse Glass, in turn, brought both Tokarczuk and Sebald to mind. Which is why I can't yet bring myself to put the book on my "have read" shelves and am keeping it right by the side of the bed. A re-read is surely imminent.

It's possibly my favorite book of the year, and (here's a sentence I never thought I'd write) the fact that I'm briefly mentioned in the final chapter has nothing at all to do with it!
Posted by Furrowed Middlebrow at 6:10 AM