All that glitters is not gold, indeed. Sometimes those bright shiny obscurities one finds glinting in the mud would do just as well to stay buried. (Caution: this post has a snarkiness quotient far higher than my norm!)


I see a vision of … an uninspired author:
CONSTANCE RUTHERFORD, Double Entry (1939)

But why must Isabeau come sneaking into her memory, filling it with poisonous thoughts? For a moment, caught between two times, she had hated Piers, hated him as a tyrant who compelled her to do his will. How silly! She mustn't let Isabeau do things like that, mustn't get confused between her own memories and those others.

I flagged Double Entry as of possible interest a few years ago when I first added Constance Rutherford to my master list a few years ago. I was intrigued by Rutherford's apparent versatility, which included, out of a total of six novels, a historical novel set during the Hundred Years War, a mystery that received at least some acclaim, a psychological spy story, and Double Entry, about a young wife whose archaeologist husband moves them to a medieval French chateau, where she discovers she can see into the chateau's violent and turbulent past.

Intriguing premise, no? Well, indeed, but sadly, the premise was just about the only satisfying element of this novel.

Piers Mordaunt has purchased the chateau in order to research its history, along with the Abbé of St Pierre-le-Pont nearby, who is also interested in archaeology and helps Piers with his work. Veronica is Piers' young wife, who soon begins seeing visions of the chateau's glory days. She doesn't exactly travel in time, as she has no interaction with the figures of the past. Instead, she merely experiences the emotions and sensations of people from those earlier days. In the case of her chateau flashbacks, these are almost always those of the Lady Isabeau, a former occupant of the chateau with no redeeming values whatsoever apart from her looks.

As Isabeau's life seems to have consisted primarily of battles, betrayals, forced marriage, a dead child, murder, and illicit romance (none of which we learn about in sufficient depth to make it of more than passing interest), it's hardly surprising that Veronica finds her forays into the past exhausting. It was quite tiring to read about, and I confess to having skimmed some bits of it. But Piers sees her gift as a godsend, and pressures her to continue handling various historic items in order to learn more about their history, culminating in a harrowing visit to the chateau's newly-excavated dungeons. The kindly Abbé issues repeated warnings about the dangers of such dabbling, but of course the warnings aren't heeded or else there would have been no story at all. 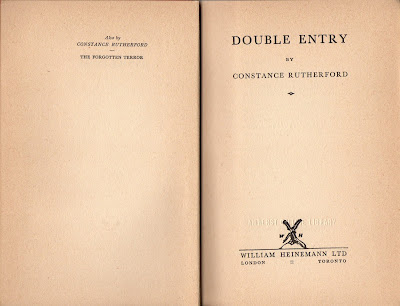 In addition to the concern that Veronica's visions—during which she experiences the very dark emotions and motives of Isabeau—might permanently discombobulate her own mind (such as it is), there's the additional complication that her gift is double-edged. When Piers attempts to check the accuracy of her visions by giving her items from his own childhood and home life, an old pencil of his gives her an unexpected glimpse of the kind of person he is beneath the surface. A visit from his alienated sister, Marian, and her friend Mr Hemmersley (who tends to pontificate endlessly about Veronica's gift and the nature of time—I skimmed a bit of that as well), provides further revelations. In the meantime, Gustave Marchand, an English-speaking woodsman working to deforest France, has rescued her dog and become her ideal of a perfect man, which perhaps muddles some of her visions of Isabeau's love life with her own wishful thinking.

Are you getting the idea that this isn't a favorite novel?

Honestly, I did find the clairvoyance plot interesting at first, and the chateau setting is intriguing too. But Veronica's visions were pure romance novel dreck, and the present day plot isn't much more sophisticated. We learn nothing of much substance about Veronica's past or her family, nor of what has made her into such a wet dishmop of a young woman. This depthlessness and anchorlessness at least helps subtract a tiny bit from the implausibility of her losing her own identity so easily (if you don't have much identity to begin with, it's surely easier to lose track of it), but it also subtracts from the reader's ability to care much about her. And whether you can feel that the novel's ending is a happy one or not will depend on your point of view, it's certainly silly and unbelievable, and it leaves Veronica just as wet and dim-witted as ever.

Sadly then, I feel I can safely remove Rutherford's other works from my overwhelming TBR list. But if anyone comes across this or another of her books and feels differently about them, do let me know.


Schoolgirls grow up (but not in this novel):
JOAN COGGIN, And Why Not Knowing (1929)

'I am sorry—it's frightfully rude, I know, but you were looking so intense and then the ink pouring all over you! There is some on your face, too.'

Penelope gurgled, 'Just as I was meditating.'

'What were you meditating about?'

'I don't know. I was just sitting biting my pen and meditating; I felt that that was what an author would do.'

On the bright side, And Why Not Knowing is not as bad as Double Entry. It's considerably better written and it has some amusing high points. And if you've ever wondered what a girls' school story would be like if it followed its perky gung-ho protagonists into their adult romantic lives, this could be just the book for you. Though the risk is that it might also be the book that efficiently and permanently removes your yearning for such a story. 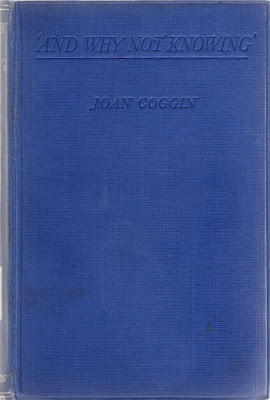 I first wrote about Joan Coggin back in 2014 after reading the first of her mystery novels, Who Killed the Curate? (1944), featuring the loopy Lady Lupin as detective. That book was zany, frivolous, entertaining fun. Fifteen years earlier, in 1929, Coggin published her first book, and her only non-mystery novel for adults (she later published three more mysteries and six girls' school stories under the pseudonym Joanna Lloyd). 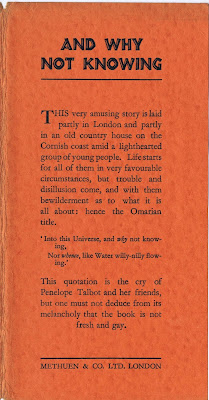 And Why Not Knowing (the title, poetic language for "and not knowing why," comes from the Rubaiyat—see here, Stanza XXIX, for the full quote) follows the early adult years of three young women—Penelope Talbot, Ann Graham, and Nora Conway—who are just finishing school as the novel opens. The three are intricately interrelated and it took some considerable time for me to sort it all out: It seems that Penelope's mother married young to a man who already had two grown children, Dick and Jean. Ann and her brother John are Jean's children, which makes them half-somethings to Penelope but no blood relation. Nora is an orphaned niece of Mrs Trevellion's, and Penelope's mother's second marriage was to Mr Trevellion, who already had a 10-year-old son Donald. John and Donald also appear now and again for some perky dialogue, as well as other young men. 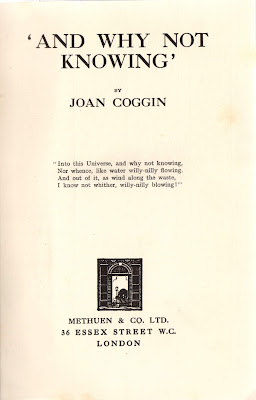 Among those young men is Giles Roscoe, who marries the pretty Nora despite having more rapport with Penelope, who has always secretly loved him, thus tidily setting up the melodrama portion of the novel. As time passes, Nora—who is utterly self-absorbed but whom everyone in the book inexplicably adores and defends—becomes more unstable and reckless. She abandons Giles, who seeks comfort in Penelope, thus arousing her emotions and hopes, only to have Nora return and stake her claim again. Etc. Etc. The plotlines around Nora (appropriately nicknamed "Princess") are simply asinine, and by the end of the novel the three initially-likeable main characters had irrevocably become for me, in shorthand, the Bitch, the Doormat, and the Enabler, and I wouldn't have got my clothes wet rescuing any of them from a flood.

The last portion of the novel is weakened by some trite and shallow spiritualizing, which is only topped off by a delightful passage in which Penelope describes how absolutely repulsed she is by Jews. Always lovely to see in the protagonist of a novel, especially one so clearly autobiographical!

It's hard to see what exactly the target audience for this novel was. Actual schoolgirls might have enjoyed the lighter, sillier passages, but the gushy romance would likely have irritated them. But more mature young women would surely have been either annoyed by the frivolous tone, if they were sophisticated, or, if they were the stereotypical Boots Library patronizing shopgirls looking for a romantic melodrama, they would have found the intellectual banter an irritating disruption to the gushiness. Either way, I'd like to think they would have found the main characters difficult to like.

In sum, if you'd like to read about schoolgirls growing up, you might be better off sticking with the books in which Dorita Fairlie Bruce married off her former schoolgirl heroines, or perhaps sit back and relax with The Chalet School Reunion. Otherwise, you may find yourself feeling you've wasted your time, "and why not knowing."
Posted by Furrowed Middlebrow at 11:13 AM