Seduced by Victorians: BETTY ASKWITH, A Step out of Time (1966) 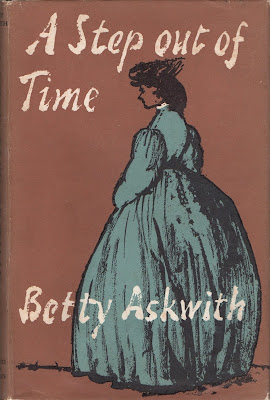 "But didn't you find it all dreadfully tiresome, Charlotte? The dressing-up and the hair-brushing and the voluminous skirts?"

"No, you know, I didn't. One learns how to manage one's crinoline and it's rather a nice feeling. One sort of sails along, and when one sits down, with those great skirts billowing around one, one feels important and dignified, so ... so ... " she spoke rather shyly, "so much of a lady."

This largely forgotten novel, which I included on my Furrowed Middlebrow Dozen in December (and am just finally getting round to reviewing now—yikes), is a timeslip tale with lots of interest for today's readers. 22-year-old Charlotte, a young woman in the mid-1960s, has a near-death experience during what her parents believe is an appendectomy (really an abortion), and slips into the body of Lucy, another girl the same age living in the mid-1800s, who has also had a near-death experience—not coincidentally the result of throwing herself down a flight of stairs in an attempt to abort her own unwanted child. The two girls are nursed, a century apart—in the same room (Lucy's family home has now become a clinic). Although Charlotte is only unconscious for a couple of hours in the present, she has (or so she claims to her trusted aunt, who narrates the story with first-person skepticism) spent several months living, quite happily, in a well-to-do mid-Victorian family.

In her account of the experience to her aunt, Charlotte has little trouble adapting to Lucy's life as a young Victorian woman, on the cusp of adulthood (and, of course, the cusp of marriagability), but far more sheltered and protected than in her modern existence. Where she has considerably more difficulty is in readjusting, after her return, to the more mundane, less glamorous world of the present.

The middle portion of the novel is a diary Charlotte keeps during her experience, which she hides in a cubbyhole in the room and then miraculously finds waiting there in the present (definitely a willing suspension of disbelief required there). In this passage, Charlotte and Lucy's half-brother Edward discuss Lucy's sister Grace, who wants to escape the stultifying life planned for her and train for nursing. Edward's questioning inspires Charlotte to analyze just how much she's enjoying Lucy's life:

Edward looked at me quizzically:

'And yet,' he said, 'this life, which you repudiate so eloquently on behalf of Grace, you find good enough for Lucy?'

I was taken aback because, in truth, I do. I am perfectly contented with Charlton and my riding and my singing and my patchwork quilt. I don't mind the restrictions that I ought to find so galling. I like the formality of our ordered days. I am surrounded by affection, I feel safe and happy. It is odder even than Edward imagines, because I have been free. I have been emancipated from all these restraints and it seems I prefer the cage. There is one thing that may, in part, explain it. I do not feel that this is for a lifetime. Somehow I know that it cannot last, that I am living on borrowed time, that some day I shall have to go back and that I must enjoy the present and take every sun-filled moment as it comes.

Charlotte, who as her aunt points out could never be bothered to get out of bed for breakfast, also describes the pleasures of breakfast at Charlton, Lucy's family home:

"[B]reakfast at home or in my flat never seemed worth getting up for. Just a scramble on the dinette table. Someone doing an egg if they wanted one. Daddy eating like a machine and rushing off. Linda in her old wrapper and no make-up. Whereas here it was so different. The fire winking in the cut-steel grate and the silver beautifully polished and the hot rolls and the home-made jam on the Lazy Susan in the middle of the table and the starched white cloth. I used to sit at the head of the table opposite the window and watch the snow floating down or the street lamp shining primrose through the yellow fog, and sip my coffee, and—I know it sounds absurd—but what was the French phrase, something about 'calme, ordre, luxe et volupte?' Well, that was what came into my head."

It's a rather disingenuous comparison, of course, between Lucy's decidedly upper-crust life and Charlotte's more plain jane middle-class existence, with a drab job, a drab flat, and divorced parents. Who wouldn't be tempted to spend a few months at Charlton (at least if one could be certain not to require antibiotics during that time)? 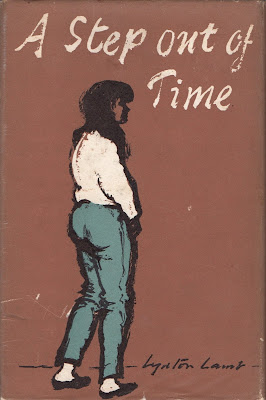 But the front and back covers of the Chatto & Windus UK edition dustjacket (my copy of the book was the happy product of a recent World of Rare Books splurge), designed by Lynton Lamb, also makes simply but effectively explicit another factor that must have played a role in Charlotte's Victorian contentment. On the back cover, Charlotte, in her own body and time, looks a bit slumped and angsty, uncomfortable in her own skin, a bit awkward. While on the front cover, in Lucy's body in the mid-1800s, she is leaner, poised, decidedly posh, and rather elegant.

I didn't think enough about this body switch when I first read the novel, and indeed Charlotte's telling of her story doesn't make a great deal of the more slender, refined body she inhabits as Lucy, but it might go a long way toward explaining just how seductive the earlier time becomes for her. If I could spend a few months as a tall, dashing, lean young man at Charlton, I might be tempted too (though truth be told 1920s Paris might be better suited to me)!

On more than one occasion, A Step Out of Time reminded me of one of Mabel Esther Allan's best widening world stories, though I suspect MEA would have been less ambivalent in showing the Victorian past as undesirable for women. Askwith allows for a bit more uncertainty, showing the undeniable attractions of well-to-do Victorian life for a young woman, even while reminding us of all the terrible disadvantages. (Askwith is best known today for her biographical works about Victorian figures, so she may well have been using Charlotte to explore her own attraction to the period.)

But what I found most striking about the novel was its marked focus on unwanted pregancy, both within and outside of marriage, and the ways women in both times found of coping with it. And indeed, as Askwith must have realized, this might be the most pressing difference, for women, between a comfortable Victorian existence and modern middle-class drudgery. The deal-breaker that tilts the balance against all other factors might well be the thought of life before effective birth control, when so many women either spent their lives in pregnancy and childbirth or else died young from same. In many ways, all the other elements of women's social equality were dependent on this development, so it's interesting that Askwith, in a novel that is by no means vehemently feminist in any outward way (see below!), makes the issue so clear. It's unwanted pregnancies and the efforts of the two women to rid themselves of them that links Charlotte and Lucy in the first place. Askwith's matter-of-fact portrayal of Charlotte's abortion might have been surprising for some of her readers even in the Swinging Sixties, but Lucy's married cousin Emily's strategy (learned from her mother-in-law, no less) of leaping repeatedly from a wall on her husband's estate to end as many of her all-too-frequent pregnancies as possible is even more notable. And for those keeping score, there's also Lucy's lady's maid Rose, who is seduced and impregnated by Lucy's stepfather—not to mention Rose's predecessor, who may well have had the same fate.

Which leads me to note that, although this novel is highly readable and very entertaining, and might almost as easily be enjoyed by readers today as it was in 1966, Charlotte's attitudes toward the various seducers in the novel would likely give folks pause. Here she is speaking of the man who seduced Lucy:

"He must have been rather a cad.''

"Yes, he must. But it was rather in the way of things. The eighteenth-century idea still lingered I suppose. Girls were so shielded and guarded that gentlemen were entitled to take what they could. It was the girl's business, or her parents', to draw the line and keep the distance. I think his lordship may have thought poor Lucy asked for it.''

Then, there's Charlotte's complacency about Lucy's stepfather's seduction of Rose (which of course precipitates Rose's immediate dismissal from her job and makes her terrified of returning home to her fisherman father):

I [her aunt] interrupted: "Didn't you go on feeling horrified about Papa?"

Charlotte hesitated. "Just at first," she said. "More shy than horrified, if you know what I mean. I felt I wanted to keep away from him, not to touch him. And then—I don't know—he was always so kind, so fond of George and somehow there was a sort of fundamental innocence about him. I couldn't keep it up. It seemed to melt into the general happiness.

Well, of course, when you see a rapist being kind to his little boy, how could you possibly not feel affectionate toward him?! Um…

But apart from those cringeworthy moments for readers in the age of "#MeToo" (but would readers in the 60s really not have wondered about those attitudes too?), A Step Out of Time was a completely enjoyable and rather addictive read. And even the cringeworthy moments are valuable, I think, in showing how people once processed and rationalized the same problems we deal with today. What do you think?
Posted by Furrowed Middlebrow at 5:58 AM