Back to reality (such as it is)

Well, my holiday blog break has now, unintentionally, extended well beyond the holidays and well beyond the limits of our fabulous trip, from which we returned more than two weeks ago. My excuse for my absence includes the brutal interaction of the worst jet lag I've ever had (a 15 hour time difference will turn your sleep inside out) and the insidious cold with which we both returned. The cold made us tired, which meant we didn't, for the first several days, sufficiently resist the urge to fall into blissful slumber at noon, thus perpetuating the evil jetlag, etc etc. Ugh.

Two weeks on, I am now more or less back in the land of the living, though my head still bobs a bit at my desk every afternoon, and I still have a disorienting tendency (for one who has never been an early riser) to find myself ready and rarin' to go at 4 AM each morning.

At any rate, it was all more than worthwhile, as we had a wonderful time and got to have a holiday completely different from anything we had done before.

Our first week or so was the sightseeing-heavy portion of our trip. We spent the first three days in Manila. We explored Intramuros, the old part of the city, including Fort Santiago (left in ruins after the terrible bombing raids on Manila during World War II), did a fascinating tour of several major churches, and went to Malacanang Palace, the Filipino equivalent of the White House or No. 10 Downing Street:

Almost as fascinating as the churches was riding around the crowded, chaotic city itself. The traffic is unlike anything I'd ever experienced before, with automobiles, jeepneys (the long, modified Jeeps which function as city buses), "tricycles" (motorbikes of various kinds with appendages—some rather precarious-looking—to allow them to carry passengers), and hordes of people dodging one another at every turn. And yet somehow accidents are generally avoided, people are alert and mostly good-humored, and the megacity continues to operate.

Then, a few days before Christmas, we made the flight from Manila to Siem Reap in Cambodia (undoubtedly the most exotic airline boarding pass I'll ever see my name on):

For three days, we got up around dawn (late by Siem Reap standards) to make our way to the magificent temples of Angkor, driven hither and yon by our friendly and informative tuk-tuk driver, Charlie (ours for a mere $20 per day—expensive Cambodia is not!). It was hot in Cambodia, and the sun occasionally made me feel like a gecko roasting on the sand in Death Valley, so after lunch we would return to our lovely air-conditioned hotel room, freshen up, and then snooze or read through the hottest time of day.

It was all well worth the prolific perspiration. Such an amazing place, whether you're interested in the spiritual side of the temples, the stupendous architecture, or the tremendous historical significance of the area.

Next, we flew back from Siem Reap to Manila and were driven to Olongopo City about three hours away to spend the rest of our trip with Andy's family. They had planned a fairly large scale family reunion to coincide with our visit, and I got to meet dozens of long-time Facebook friends never before seen in person, as well as reuniting with some I had met before. Oh, and posing for hundreds of pictures (occasionally with people whose exact relationship to Andy was a mystery). We received the warmest hospitality I've ever encountered, and I feel very lucky to have married into such a kind, caring family and into so much love and laughter. 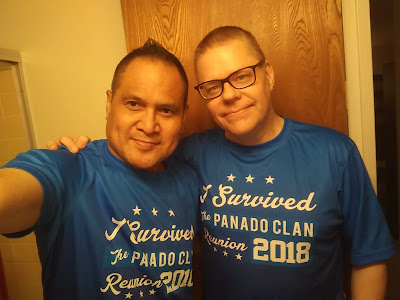 So what, a few of you might be asking, did I read on holiday? There were, after all, all those times spent recovering from the heat in our hotel room. Well, not too surprisingly, there were no new book acquisitions during this trip, so no need to purchase an extra suitcase to schlep all my new books home, as we did on our England trip. (There are reportedly some small stalls of English language books scattered among the streets of Intramuros—I did check online before arrival, of course—but they were elusive and the heat and humidity made me a bit too impatient to search for them.)

On the flight over, I started the 10th Inspector Gamache novel by Louise Penny, The Long Way Home. Due to the miracle which somehow allowed me, with only slight chemical assistance, to sleep for about 10 of the 14 hours we were in the air (a first for me on any flight, ever!), I didn't have as much reading time as I might have, but I managed to become, as usual, completely immersed in Penny's world, and finished the book in our first couple of days in Manila. I also read and very much enjoyed the fourth Dorothy Martin mystery by Jeanne M. Dams, whom I mentioned in my Furrowed Middlebrow Dozen post.

In one of those strange coincidences that occur (or that perhaps result from large companies keeping us under surveillance so much that they know what we want before we do?), a Filipino thriller (alleged to be the first) set in Manila, called Smaller and Smaller Circles, by F. H. Batacan, was a Kindle Daily Deal while we were actually in Manila, and I couldn't resist. It was quite atmospheric and interesting, but definitely not for the squeamish! Yikes!

After that foray into darkness, I was ready for some good humor and pleasantness, so I turned to an old favorite I haven't read in ages, Elizabeth Cadell, and got through two of her charming novels, The Corner Shop and Fishy Said the Admiral. I'm sure most of you are aware that Cadell's works have in the past couple of years been released in e-book and paperback, so are wonderfully available at last. Both books were great frolics and perfect vacation reading.

I also read the first half or so of Oriel Malet's Paris memoir, Jam Today, and then somehow got sidetracked and haven't finished it. But I will. It's not likely to be an absolute favorite, but I was enjoying it.

And for the flight back home?  Well, after the excitement of seeing the brand new Miss Universe, crowned just a few days before (Andy was excited, of course, that Miss Philippines won), while waiting at the airport...

I "only" managed eight hours of somewhat fitful sleep on the return flight—still way better than my average—so I had some time for the 11th Inspector Gamache, The Nature of the Beast, which was far-fetched but impossible to put down. What more could you ask of in-flight reading? As number 14 of the series was just published before Christmas, I'm getting closer to being up-to-date—but now I wonder if I should save the remaining books for our next trip!

Oh, and before I forget, the new Furrowed Middlebrow titles are out (if you don't already know about them, see here and here) and I'm so thrilled to be getting such a positive response from readers. A big thanks to anyone who has reviewed the books, bought the books, told others about the books, or in any other way helped to spread the word! We're already hard at work on our next batch of books, hopefully released this summer, and I'm busting my buttons to tell you about it, but I can't just yet...

And that's that! This is clearly not one of my most inspired posts, but I hope to be back to my usual scintillating self soon. I still have several of those books from my Furrowed Middlebrow Dozen to get reviewed, so I'll get on that. Meanwhile, hope you all had lovely holidays and that 2019 is treating you well (though, now that I'm more or less back to reality, I'm rather thinking that, whether you're in the U.K. or the U.S., avoiding reality—especially the news—may be the healthiest choice—ugh indeed).
Posted by Furrowed Middlebrow at 8:35 AM