It's beyond high time that I get round to writing again about some of the reading I've been doing. Quite a lot of it, in fact, and some interesting finds along the way, so the American list will have to go on hold for a time. And I'll start with one of the most befuddling books I've read in a while (which seems to have resulted in a rather befuddling review)...

I finished reading this book, about the romance of an 18-year-old girl studying music in Paris between the wars, a few days before I got round to gathering my thoughts for a review. This is not uncommon, and my feelings about a book are generally pretty clear when I finish it and don't change a great deal, though they do get fine-tuned, but this time the delay seems to have had an unusual effect. I did manage to make a few notes right after finishing the book, one of which reads as follows:

I was hoping for a glittering, sophisticated, humorous, clever novel along the lines of Guard Your Daughters or Elizabeth Eliot's Alice, but Goodnight Pelican can't quite live up to those standards. It's consistently entertaining, and cleverly plotted enough that one doesn't have any sense (or I didn't, anyway) of how it will end. But for the most part it doesn't take a humorous perspective on the situation, with the result that it comes across as a bit too earnest for the relatively shallow depths it plumbs, and the narrator is irritating at times with no real payoff (unlike, say, The Great Gatsby, where neurotic, pretentious, dishonest Nick Carroway sheds all sorts of light on the other characters because of his own weaknesses). Having just read Doris Langley Moore's A Game of Snakes and Ladders, I found myself imagining the epic complexity and intricate machinations Moore might have made from this situation, but Marr-Johnson opts to keep it simple.  With the result that Pelican is a quick, enjoyable read, but one with little depth or tendency to linger in the mind once the last page is turned.

Well, that's all well and good, though generally I try not to have expectations like those above. I usually think more along the lines of, if you want to read Guard Your Daughters, then read Guard Your Daughters, but don't try to force another book to live up to your urge for a specific thing. Even with books by a single author, I tend to think such expectations are faulty—heaven knows I've complained enough about people saying that other Stella Gibbons novels don't "live up to" Cold Comfort Farm, as if they were supposed to or as if Gibbons wanted them to. Ahem. And while it is certainly true that Doris Langley Moore would probably have tackled the themes of Goodnight Pelican with brilliant gusto, it would then have been a Doris Langley Moore novel and not a Diana Marr-Johnson novel, so that's hardly playing the game either.

I seem to have gone on a tangent. At any rate, when I returned to make more thorough notes about Goodnight, Pelican, the first thing I did was look back at it's very striking opening paragraph:

I was returning to Montpelier Square with some "petits suisses" for a dinner party when I let the memory break like an ancient bottle, drenching me with poisonous matter and a more disturbing pleasure. It was no time to lay a ghost, but the need for exorcism is seldom timely and I had seen it approaching for days; for no good reason unless life is a softening-up process and by middle age the returning seasons of the year dangerously evocative.

Now, having finished the book, I'm absolutely yearning to know more about that dinner party, and its guests, and about how Clara, the immature, self-absorbed, strong-willed "heroine" (or perhaps just main character?) has lived her life and is only finally thinking back on these events in middle age. 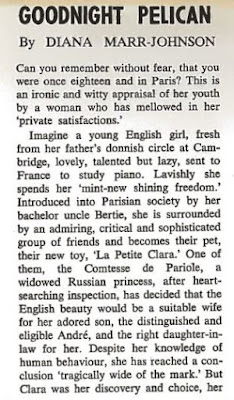 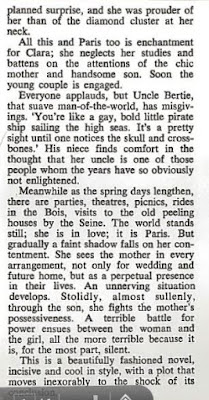 I had made a note of the opening paragraph the first time around, but on looking back I was also struck by the next two paragraphs:

I thought, I have mellowed in my private satisfactions, flourishing like the green bay tree, and cowardice is long out of place. If it is forced on me this icy afternoon, I can remember without fear that I was once eighteen and in Paris.

The tumult of excitement which ran through every hour cannot harm me how, it is merely inexplicable. Of course, I was in love, but that condition was chronic, starting at the age of six and continuing with brief remissions of sanity through my youth, and after.

And suddenly I thought there might be more to the novel than I had at first noticed. I'm still not completely sure what to make of it, in fact.

Clara has been at a finishing school in Paris, and is purportedly now spending one final year studying music and polishing her French, though in fact she is far more concerned with going out on the town. The novel's main plot is really little more than melodrama—a battle between strong-willed Clara, so shallowly certain of what's best for herself and everyone else, and her soon-to-be mother-in-law, a widow who has always been extraordinarily and perhaps unhealthily close to her son and expects to remain so when he's married. The two begin as friends, and Maria effectively hand selects Clara to be her daughter-in-law, throwing Clara and her son together regularly until the romance blossoms. But the tension of their underlying battles of wills builds all the way to what the jacket blurb tritely calls its shocking conclusion.

One thing that Marr-Johnson undoubtedly captures beautifully is the frantic joy of being young, full of energy, and rather stupid in the most glamorous of all cities. Here are the somewhat overprotected Clara's thoughts after after being surprised that a young man is allowed to bring her home in a taxi unchaperoned:

So much, I thought, for a mother's warning. I was not really surprised. For a long time I had suspected my parents to be out of touch with life, and this merely confirmed it. They had the most extraordinary ideas, as for instance in their attitude to work. They believed I should work hard at the piano because such an opportunity might never come my way again. I knew that an infinite vista of opportunities stretched before me, it was merely a question of selecting the most urgent. To sit at cafes, to ride in the Bois, to watch the children playing in the Tuileries, to gaze in shop windows and wander slowly through the streets to a lunch appointment, to see the lights of Montmartre and drive home through the empty grey city at dawn were matters of imperative necessity. Music could wait.

Now, I can completely relate to Clara's attitude here, and remember what it was like for me backpacking through Europe on my own during the summer before my final year at university, after a lifetime of overprotection and fret. And I wonder if part of what made me not love the novel at first was that a part of me was (as many readers would probably be) absolutely ready to identify with Clara, as a young, charming girl living a glamorous life of irresponsibility and rebellion. But then Marr-Johnson gradually challenges that identification—and any simple reminiscing it may have inspired about one's own joyful youthful stupidity—by showing Clara to being just a bit too carelessly swept up in it all, too selfishly manipulating to get what she wants, and too shallowly indifferent to other people's needs. It's not nearly so much fun to question just how shallow and selfish one was oneself at age 21 as it is to simply reminisce about what fun life was… 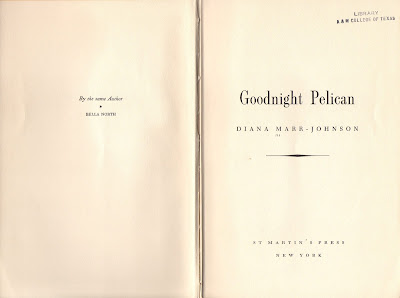 One source of tension between Clara and André, her fiancé, is his use of part of his spare time working with a charity helping the poor and the sick as well as alcoholics and other downtrodden residents of Paris. This is completely contrary to Clara's views of the glamour of the city and the pleasures of life, and she is rather like a dog with a bone asking him why he should want to do such things. When she accompanies him to visit a dying man, we get a clearer idea of what lies beneath her superficially cheerful exterior:

The room was no more to me than a dreary stage set, and I could have watched its occupant die with the composed attention which I accorded a play, so long as I remained safely in the audience. Reality was absent. But the thought of becoming involved, even to the smallest degree, terrified me. Supposing he had called out, while André was away, or had beckoned to me, needing something? I felt a shiver of repulsion, and with it an anger against André, who should have known better than to take me to such a place, exposing me to such a risk.

It was interesting, then, to look at the biographical information I have about Marr-Johnson and find this tidbit in her Contemporary Authors entry:

Marr-Johnson was well known for her charitable activities on behalf of the poor. During World War II she opened a meeting place in London called Beauchamp Lodge, where poor women could find respite from the grinding poverty and shocking living conditions that surrounded them. It wasn't long before the lodge became a sort of women's club, then added a nursery center, youth shelter, and the British equivalent of a soup kitchen. Marr-Johnson devoted much time and effort to keep the refuge open by raising funds, delivering public lectures, and working at the center itself. Eventually Beauchamp Lodge collected clothing and found housing for people displaced by wartime bombings during the Blitz; its founder's efforts were so successful that the lodge remains in operation today.

I forgot to mention that Marr-Johnson, who published either five or six novels (there's a bit of confusion that I haven't worked out yet) was actually a niece of W. Somerset Maugham, as well as the sister of novelist Robin Maugham. She apparently, like Clara, moved comfortably in high society, and counted among her friends such folks as the Churchills, Noel Coward, Rebecca West, and Muriel Spark.

I'm a bit all over the place in this review, because I'm still a bit all over the place with the novel. I suspect that the only viable solution will be to go back and read it all over again, and if I'm not unconflicted about it, surely feeling the desire to read it again to "get" it is a kind of recommendation in itself. And if I happen across one or two of the author's other novels along the way, then so be it.
Posted by Furrowed Middlebrow at 9:44 AM