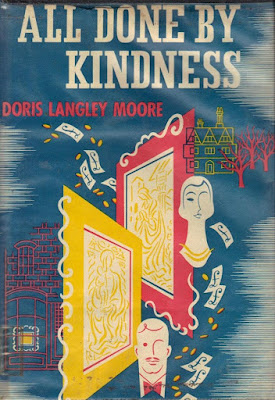 Ah, I've been awaiting the opportunity to use that title again. If I remember correctly, I've only used the "buried treasure" title once before, when I first came across the wonderful Elizabeth Fair (now almost three years ago—yikes!), who I later had the delightful experience of publishing as a Furrowed Middlebrow title from Dean Street Press. Since then, I've come across some wonderful books and authors, but no author whose work was quite forgotten enough to be called "buried" and yet consistently excellent enough to be "treasure."

It's extraordinarily odd that Doris Langley Moore should fit both of those categories. She is certainly not forgotten in herself, and is in fact remembered for several impressive reasons, probably most notably as one of the first serious historians of fashion—see her books The Woman in Fashion (1949) and The Child in Fashion (1953), among others—and the person responsible for the establishment of the Fashion Museum located in the Assembly Rooms in Bath (we walked by it on our way to see the restored Assembly Rooms where Jane Austen once danced, and now I could kick myself for not having visited the museum itself). She also occasionally worked as a costume designer for film and theatre, including designing Katharine Hepburn's dresses for The African Queen (1951)—see here for Hepburn's praise of her work.

But that's only the beginning. Moore was an important Byron scholar, and was the first non-family member to work with a large collection of Byron-related papers owned by Byron's great-granddaughter. The first of her Byron-related books, The Late Lord Byron (1961), focuses unconventionally on the dramas and revelations of the years immediately following his death, and has recently been reprinted by Neversink Press. (It's also available in the U.S. as a free download from Hathi Trust.) Lord Byron, Accounts Rendered (1974) examined the revelations that could be gleaned about Byron's life by closely examining his finances. And Ada, Countess of Lovelace (1977) is a biography of Byron's daughter. As you'll see below, Moore also utilized her knowledge of Byron in her final novel, My Caravaggio Style (1959), which deals with a forgery of Byron's famously destroyed memoirs (and even, amusingly, features Moore herself as a character when a team of Byron experts gather late in the novel to confer on the memoirs).

Then there is the fact that Moore was the first biographer of E. Nesbit (1933, expanded edition 1966), and her book, containing many interviews with family members and other contemporaries, has been heavily relied on by subsequent scholars. There's another acclaimed bio, Marie & the Duke of H: The Daydream Love Affair of Marie Bashkirtseff (1966). And there's several witty self-help and other non-fiction books as well, including The Technique of the Love Affair (1928), The Pleasure of Your Company: A Text-book of Hospitality (1933, written with her sister June Langley Moore), Our Loving Duty, or, The Young Housewife's Compendium (1936, also with June), The Vulgar Heart: An Enquiry into the Sentimental Tendencies of Public Opinion (1945), and Pleasure: A Discursive Guide Book (1953) 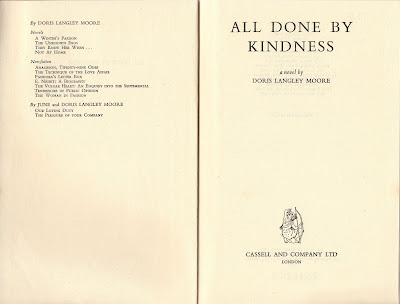 Phew! It's exhausting just listing all of her achievements. But my favorite part: her ODNB entry quietly notes that "she had no formal education."

When I first added Moore to my list of authors, I flagged her fifth novel, All Done by Kindness (1951), which was described by a bookseller as "a civilized novel about some fabulous art treasures from an old attic." I didn't know anything more about it than that, but when I started all my recent frenzy of interlibrary loan requests, I saw it staring up at me from my TBR list. And virtually as soon as I had it in my hot little hands, I knew, first, that I had to correct her entry on my list (I had her down as having written five novels instead of six, because her first, A Winter's Passion (1932), has virtually ceased to exist), and, second, that I'd found a new kindred spirit in the literary universe.

Set just after the end of World War II in the town of Charlton Wells, Kindness begins with Dr George Sandilands visiting his elderly patient Mrs Hovenden, quietly decaying in her venerable old house. Money is tight for this last of her line, and she has been attempting to sell various pieces of old-fashioned furnishings, artworks, and jewelry, none of them fashionable or valued by a postwar market obsessed by the new and clean and modern. She's finding it impossible to keep a housekeeper and has been left unattended again, barely managing to care for herself. Out of compassion and generosity (the kindness of the title), Dr Sandilands offers to provide her with funds which will allow her to find a live-in married couple to help her. She agrees, but only on condition that he must take something from her possessions in return. She mentions a few remaining trunks full of belongings handed down for generations:

"We had such large trousseaux in those days, more than we needed of everything. Then, there's all kinds of needlework and lace, and a few clothes it might be worth while to make over. The old materials were not like the rubbish you get today." She paused again and fished up, as it were, more of these long-submerged treasures. "There are one or two very pretty counterpanes, and my mother's best parasol with an ivory handle-a beauty. And you'll find some of my husband's things—though I don't suppose they'll be much use, the cassocks and surplices. The cloth is good, of course. And there are some embroidered waistcoats that must have belonged to his father. They are very old. A museum might be glad of them."

Dr Sandilands tries to beg off, imagining the useless piles of outdated clothing, and the horror of his stern housekeeping daughter Beatrix. Then:

"There are some pictures too," Mrs. Hovenden brought out with a fresh effort, "oil paintings that were in the rector's family."

And thus begins an elegant comedy of errors that will rock the art world. The story twists and turns like a middlebrow Da Vinci Code, but with far more subtlety, wit, and insight into characters both noble and corrupt, and far less violence (scheming and deceiving and maneuvering are so much more interesting than gunfire and explosions). It's a masterpiece of tight plotting and unexpected machinations.

We meet Dr Sandilands' daughters, the rather imperious Beatrix, who has no patience with old beat-up artworks, and young Linda, who works at the Public Library and is fully prepared to get swept up in the romance of a stash of old treasures. Then there's Stephanie du Plessis, Linda's superior at the Public Library, an amateur art connoisseur recently returned from living in Rhodesia, who develops a theory about the artworks and clings to it like a dog with a bone; Sir Harry Maximer, esteemed author of books on Italian art (though perhaps not quite the expert he is made out to be), who isn't above a bit of shady dealing to build his own jealously-guarded collection; Sir Harry's patient and competent secretary Mrs Rose, whose personal feelings about him complicate matters considerably; young Arnold Bayley, director of the small local Elderfield Art Gallery, who throws his hat into the ring by helping Mrs du Plessis; E. Quiller, a sleazy London junk shop dealer; and Morris, the owner of the local antique shop (or junk shop, depending on who you ask).

This is one of those wonderful books where you don't want to put it down for multiple reasons—first, because you can't begin to predict what will happen and can't wait to find out, and second, because the characters are either so likeable or so delectably unlikeable that you can't wait to see them get their just deserts. It was absolutely marvelous fun, and I knew I was hooked. I put in an interlibrary loan request for My Caravaggio Style (the only other easily obtainable Moore novel) before I was a quarter of the way through. 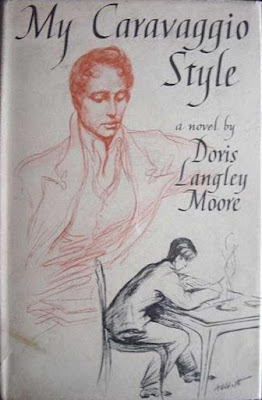 At the beginning of Caravaggio, Moore's sixth and final novel, a young bookseller and author, Quentin Williams, finds himself perversely trying to impress an American dealer interested in manuscripts, and ends by hinting that he just might have a copy of Lord Byron's long-destroyed memoirs. This is partly because the American is irritatingly smug (aren't we though?!), and perhaps also partly because Williams has just received the biannual royalties from the two biographies he's published, equalling a grand total of just over 4 pounds. He puts the American off temporarily by inventing an elaborate tale about the manuscript's location in a relative's attic in Wales, and then begins to formulate his plans.

Oh, yes, and his motives for this deception are also undoubtedly linked to his need to impress his girlfriend, a smart, beautiful model whose decision to pair up with Quentin is something neither the reader nor Quentin himself are able to quite comprehend. And her intelligence, as Quentin manages to accidentally pique her interest in Byron, becomes only one of Quentin's problems. 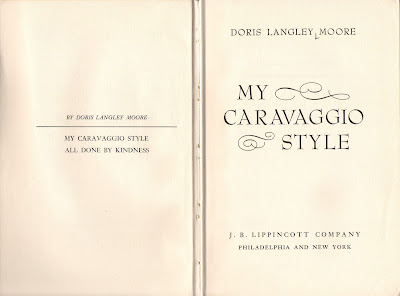 The title, by the way (a slightly confusing one for a book about Byron forgeries), comes from Byron's own description of the style of her later memoirs. Apparently, the earlier portions of his memoirs were rather tame, and shied away from the more scandalous elements of his life. But later on he returned to writing his memoirs and turned up the heat, and Quentin quite sensibly decides that his part of the lost memoirs will come from these later sections:

"My finest, ferocious Caravaggio style"—that was his own phrase for his later manner; and that was the style I was aiming at, an interplay of light and shadow that would rivet the attention and, ultimately, draw the eye to darkness.

Here, as in Kindness, the unforeseen complications and complexities form the main portion of the entertaining plot. One of the refreshing things about Moore's work is that, in those novels I've read so far at least, she rarely exerts much energy with humdrum love affairs or traditional plots ending in marriage. Her main characters are far more infatuated with paintings, porcelains, and manuscripts than they are with other humans. There are few enough authors who can make middlebrow pageturners out of highbrow passions, but Moore certainly does it.

That said, of these two novels, Kindness remains my favorite as it has the more complex and deeply satisfying plot. But if Caravaggio is the only Moore you can get your hands on, by all means do so.

Next time, working rather strangely backwards in Moore's ouevre, I'm planning to write about her fourth novel, Not at Home (1948), and her third, A Game of Snakes and Ladders (original published as They Knew Her When: A Game of Snakes and Ladders in 1938, slightly revised and retitled edition 1955). Neither were quite so easy to track down and therefore I didn't have them in hand until I'd finished the last two. (And her first two novels, A Winter's Passion and The Unknown Eros, have proven even more challenging.).
Posted by Furrowed Middlebrow at 11:13 AM