I know some of you are already fans of Joyce Dennys' humorous, fictionalized Home Front letters, first published in Sketch and collected in the 1980s into two delightful volumes, Henrietta’s War (1985) and Henrietta Sees It Through (1986). If you don't already know about them, I highly recommend them, and happily they are both in print, in paperback and e-book, from Bloomsbury. I've long been a fan, and they can be recommended almost as much for Dennys' wonderful illustrations as for their humorous insight into wartime life. 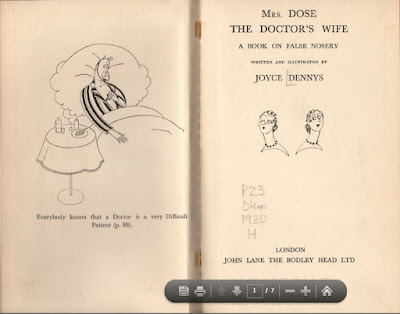 And for as long as I've been a fan of those books, I have yearned to get hold of her earlier works of humor, which include three volumes—Mrs Dose the Doctor's Wife (1930), Repeated Doses (1931), and The Over-Dose (1933)—dedicated to the vicissitudes of life as a doctor's wife, as well as one other title, Economy Must Be Our Watchword (1932), which certainly seems to be a novel, or at least what might loosely be called one. 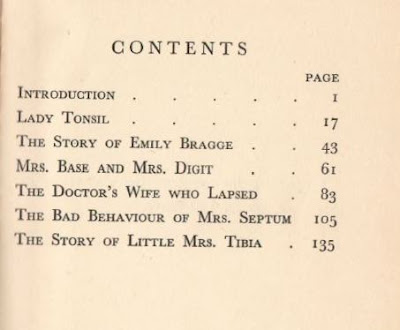 Simon at Stuck in a Book briefly mentioned Economy Must Be Our Watchword in a post, which in turn inspired a full review by Danielle here. As it turns out, Simon had already written about the Dose books as well (see here), though I had somehow missed it until now. (Fortunately, I am well accustomed to being a few steps behind Simon most of the time!)

For some reason, although I've been yearning for the books, I believed that they were all hopelessly inaccessible to me. I don't know what made me double-check this recently, but when I did I found that the three Dose books, at least, were each available in exactly one American library (and medical libraries at that). I requested the first one, and a few days later it arrived. 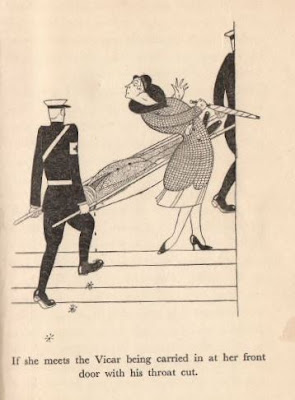 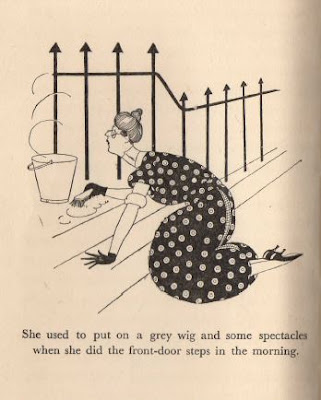 In one way, for certain, the book was no disappointment. Dennys' illustrations here are as wonderful as ever, and I started wondering why there isn't a catalogue or a website devoted to her wonderful art. I'm sharing a few of these illustrations here in the interests of adding to her artistic reputation. (Bear in mind that the book I got hold of was a re-bound library copy that was very tightly bound, so some of the scans have ominous dark shadows on one side of the other. I promise I didn't damage the book in any way—I'm not sure a sledgehammer could have damaged that spine.) 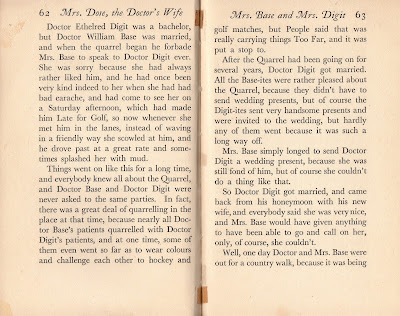 The book itself is quite short—130 or so pages of gargantuan print, with the illustrations and their blank backs counting toward that page count. It's comprised of a series a short vignettes about the difficulties of being married to a doctor (as Dennys herself, and her fictional alter-ego Henrietta, were). It's subtitled "A Book on False Nosery" due to the fact that a doctor's wife must resign herself to forever wearing a false nose, in order to protect the doctor's reputation and standing in the community. The difficulties that ensue when wives are reluctant to wear the nose, or when they inadvertently lose it, are dire indeed, as in the example of Emily Bragge, who attempted (perhaps with particular relevance to Dennys herself) to remain an artist even after marrying a doctor:

Her crowning infamy was to turn the Waiting-Room into a studio, because, she said, it had a good light. There she established herself amid the ghastly confusion of her trade. She said she didn't mind the Patients waiting there too, as long as they did not disturb her, but she made a man who was groaning with pain sit in the hall, also a little girl with hiccoughs.

That's one of a handful of passages that gave me real chuckles. The book is certainly pleasant and enjoyable, but much of the time the humor was a bit too exaggerated for me, or, on the other hand, a bit too tepid. The vignette form also prevented me from feeling the kind of involvement with characters that one got so wonderfully from the Henrietta books. What might be silly good fun regarding a character one has gotten to know and love doesn't work so well with a character we're only glimpsing for six pages. 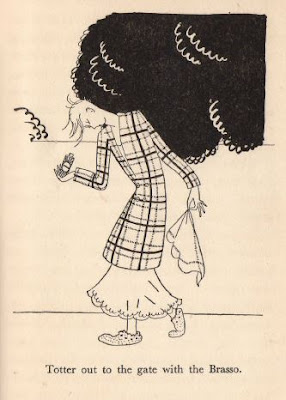 Here's a slightly longer passage that might give more of an idea—though it does end in a chuckle-worthy line (but oh! all those Capital Letters!):

There was once a young Doctor called Edward Cardiac who so far forgot himself as to marry a girl called Cynthia Larke who had once been On The Stage.

She had been a student at the Academy of Dramatic Art for two years, where they had told her that the best thing she could do would be to Marry some Good Man.

Edward Cardiac met her at a dance given by her uncle, Sir Joshua Tonsil, one of the biggest Ear, Nose, and Throat men in Harley Street, and you can hardly blame Edward for thinking she was the right sort of girl for a Doctor's Wife, because when he first caught sight of her she was answering the telephone in the hall.

I do admit to laughing at the telephone bit, though. But what about this joke about malpractice?:

If he puts poison in a patient's medicine, by mistake, and kills him, it is, of course, pretty serious for him, but there are many ways of wriggling out of Awkward Situations of this kind; in fact, the last year of a medical student's training is devoted entirely to this most engrossing subject.

Hmmm, not so much. 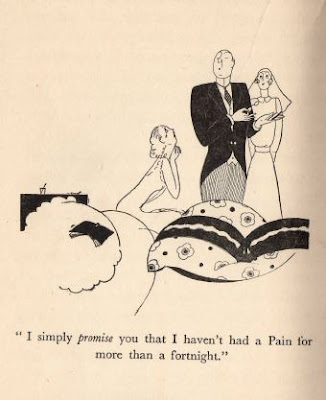 I was so hoping that I would find that these books were true buried treasure, but apart from the wonderful drawings, I didn't quite. I do remain curious about Economy Must Be Our Watchword, which might be more in the form of a novel. But alas, that one seems to be completely inaccessible. Barring an opportunity to read it, my most fervent recommendation is to pick up the Henrietta books and enjoy them yet again. (Or perhaps Dennys' memoir, And Then There Was One, published not long after the Henrietta books? Has anyone read that one?) 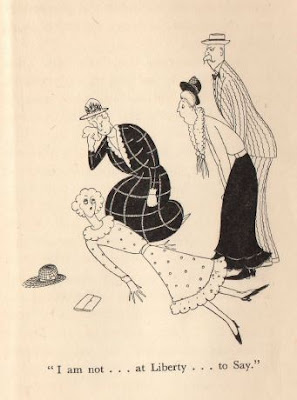 But I cannot end on a bummer of a note. So here, without further ado, I give you what I thought was the single funniest passage in the book, in which poor Mrs Septum, convinced that she has appendicitis, gets a bit more frank conversation from her nurse than she might have if she'd not been a doctor's wife:

Then she undressed and got into bed, and Nurse Barker stayed and talked to her for a long time, and told her that they hadn't had a Death in the Home for six months, but she supposed they'd have to have one before long. And then she said what pretty hair Mrs. Septum had, and she had only once before nursed anybody with hair that colour and she was an appendicitis case too, only she hadn't done well; in fact, she had died, and nobody knew why.

Now that passage is worthy of Henrietta.
Posted by Furrowed Middlebrow at 5:44 AM