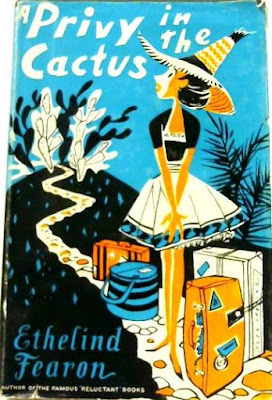 Thirteen more excuses to show book covers in this post, in the form of thirteen more children's authors just added to my British list in its most recent update. But first out of the gate, as promised, is an author who, though she is indeed included on the list because of her children's fiction, is probably more of interest to most readers for her other work, including guides to cooking, homemaking, and entertaining, as well as, most intriguingly, humorous memoirs in various offbeat settings. 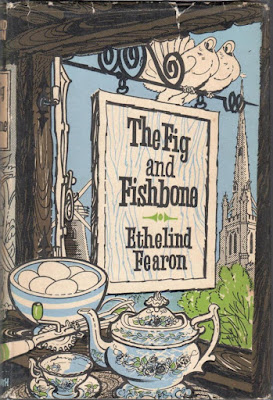 ETHELIND FEARON's humorous guide The Reluctant Hostess (1954) was actually reprinted by Penguin in 2015, and I'll bet it, and other of her non-fiction, is entertaining enough. 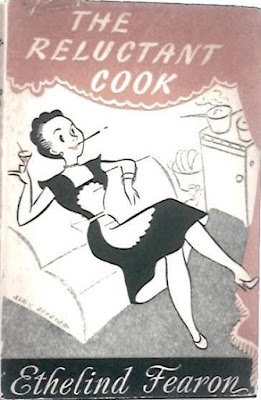 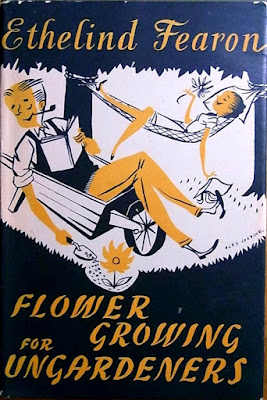 But what immediately caught my eye (admittedly in part because of enticing cover art) were her humorous memoirs. The Fig and the Fishbone (1959) tells of her experiences opening a tearoom in a 600-year-old Essex cottage, The Marquis, the Mayonaisse and Me (1961) tells of her life on an Essex farm, and A Privy in the Cactus (1965), deals with her renovations of a decrepit house in Majorca. Others include Most Happy Husbandman (1946, aka The Happiest of Men) and Me and Mr Mountjoy (1951), as well a couple of volumes that seem to be more straightforward humor titles, such as How to Keep Pace with Your Daughter (1958) and Without My Yacht: How to Be at Home in the South of France (1959). 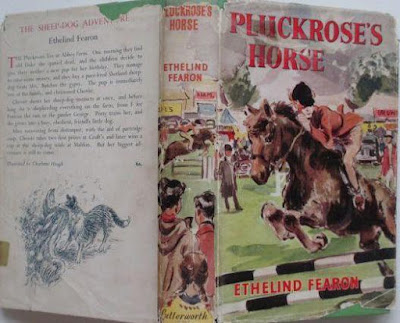 Fearon's children's titles include The Sheep-Dog Adventure (1953), The Young Market Gardeners (1953), The Secret of the Château (1955), and Pluckrose's Horse (1955), and may be completely delightful as well, for all I know, but it's the memoirs I'll be keeping an eye out for. Sadie Stein wrote an enthusiastic article about Fearon for the Paris Review following the Penguin reprint, which can be read here. 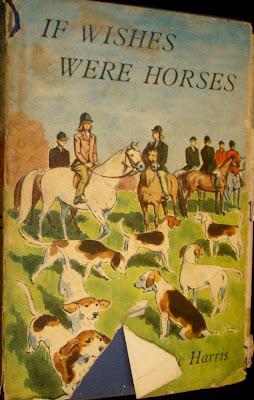 Newly added, too, are not one, not two, not three, but four more "horsy" authors, only one of which, strangely, can be definitely identified. CATHERINE ANNE HARRIS, who wrote seven books described in more detail here, may well be the Catherine A. Harris born 1936 in Worcestershire, which fits with reviews of her first book which state she was only 18 at the time, but we can't find anything to definitely prove it and the name is not unique enough to narrow the odds. 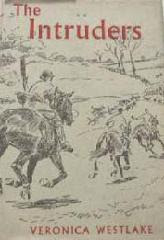 Not even a tentative ID of VERONICA WESTLAKE, possibly a pseudonym for an unknown author, who wrote four books with pony content—The Ten-Pound Pony (1953), The Intruders (1954), The Unwilling Adventurers (1955), and The Mug's Game (1956). Jane Badger Books wrote about them here, and Pony Mad Book Lovers discussed them here. 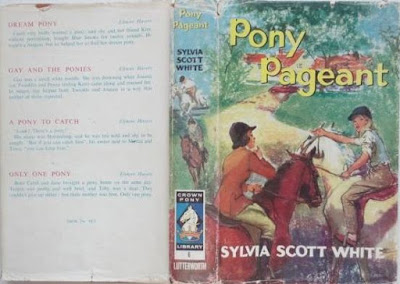 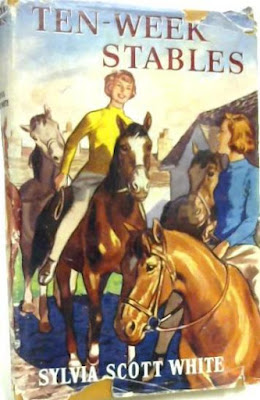 And nothing to identify SYLVIA SCOTT WHITE, whose two pony stories—Ten-Week Stables (1960) and its sequel, Pony Pageant (1965)—are discussed here. Too-common names and limited output have so far made it impossible to trace her. 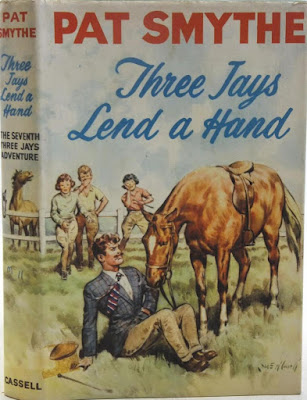 But there's plenty of information about PAT SMYTHE, author of a dozen or so children's titles but better known as a champion showjumper herself. 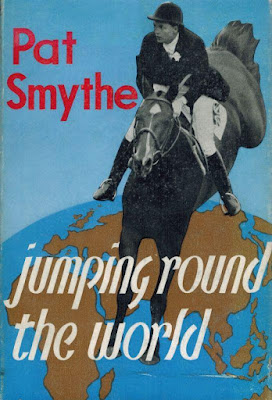 Smythe began her writing career with memoirs of her showjumping adventures, Jump for Joy (1954) and One Jump Ahead (1956), the latter of which includes her experiences in the 1956 Stockholm Olympics. 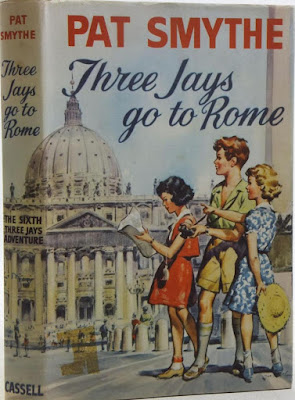 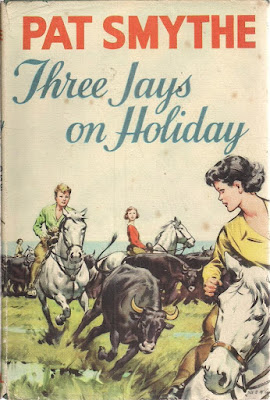 In 1957, Jacqueline Rides for a Fall initiated her "Three Jays" series of children's horse stories, in which she portrayed a semi-autobiographical version of herself alongside fictional characters and in fictional adventures. Six more titles in that series followed. She later published three more children's books—A Swiss Adventure (1970), A Spanish Adventure (1971), and A Cotswold Adventure (1973)—and published her autobiography, Leaping Life's Fences (1992). 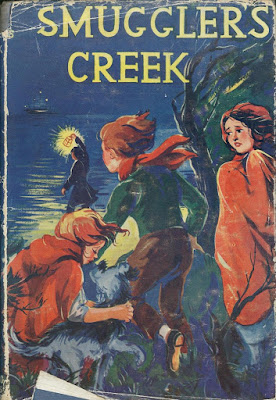 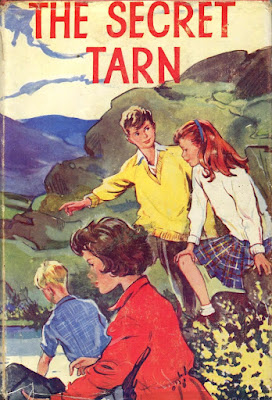 JOYCE LAURIE RALLINGS, better known as J. L. Rallings, published three children's adventure stories—Brown Valley Adventure (1959), Smuggler's Creek (1960), and The Secret Tarn (1962). Details about her are sparse, but we did happen to learn that, as of 1947, she was working as a midwife. 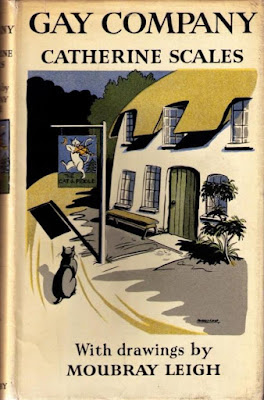 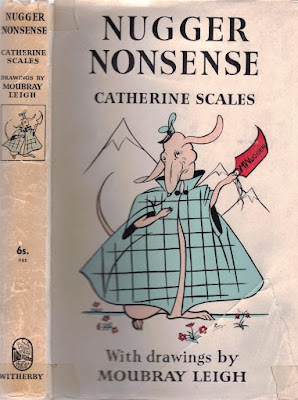 We could trace even less about CATHERINE SCALES, but the cover art of her two children's books—Gay Company (1938), about a cat and his friend, and Nugger Nonsense (1939), about dachsunds travelling in Europe—is charming enough. 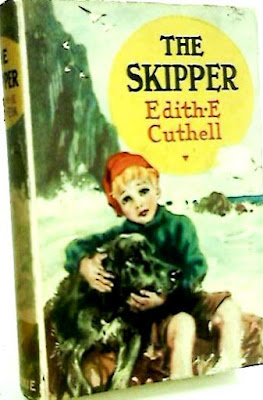 Three new additions to the list particularly utilized their times spent living in foreign locales when writing their books. EDITH E. CUTHELL lived for many years in India, and frequently set her books there. Most of her fiction appeared in the 1890s, including the children's books Indian Pets and Playmates (1891), Only a Guard-Room Dog (1892), and In the Mutiny Days (1893) and her novels A Baireuth Pilgrimage (1894), Caught by a Cook (1895), and Sweet Irish Eyes (1897). Two additional children's titles, however—Reggy, Queenie and Blot and The Skipper—appeared in 1920, qualifying her for this list. She also published several biographies in the 1910s. 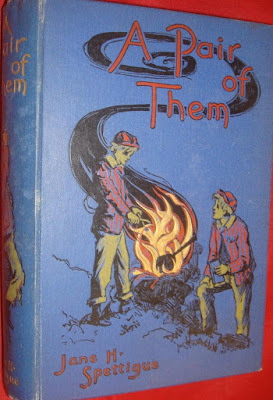 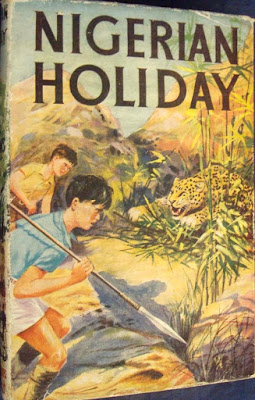 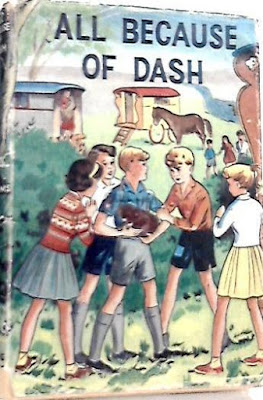 And MARION PERCY WILLIAMS, who wrote as M. P. Williams, only began publishing after her return to England, but her first book, Nigerian Holiday (1959), reveals where she had lived for a number of years. A 1954 passenger list shows her arriving in the U.K. from a previous home in Nigeria, planning to settle in Belfast with her missionary husband. She later lived in Swansea. 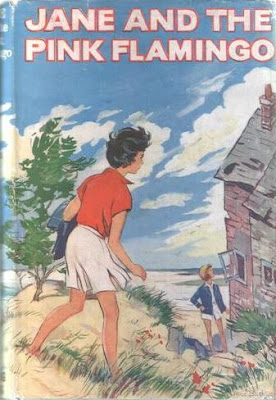 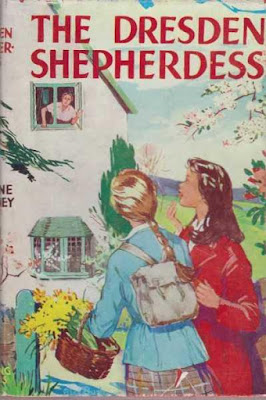 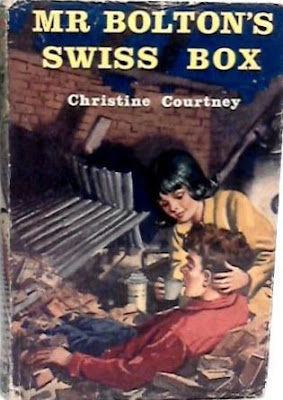 ETHEL LOUISA WESTMARLAND wrote around 20 children's books under her two pseudonyms, Christine Courtney and Ellen Elliott. Titles include Quartette at Barnham Corners (1951), Gordons at Gullcliff (1953), The Dresden Shepherdess (1960), and Jane and the Pink Flamingo (1963), as well as three books about a heroine named Susan. Presumably (but not certainly) she was the same Ellen Elliott who published several romance novels in the late 1960s and early 1970s, including Hong Kong Nurse (1968) and High Flight Nurse (1970). 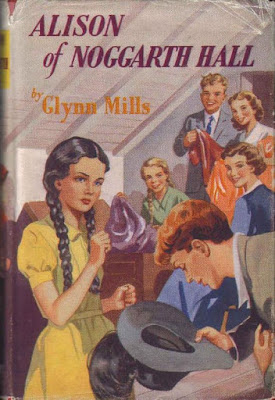 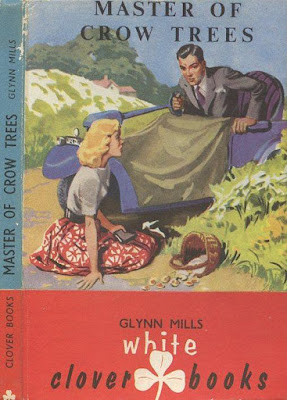 According to the British Library catalogue, GLYNN MILLS is the pseudonym of one Myra Illingworth. This seems to be the only source for that name, and if it's correct she might be the Myra Illingworth born 25 July 1914, died 9 Oct 1981, but there's nothing to definitely link that person to the author. 11 volume of fiction appeared under the Mills name. Her debut, Never Alone (1954), seems to have been marketed to adults, though I can't find any details about it, but her other books all seem to be for younger readers. Titles include Alison of Noggarth Hall (1956), They Came to Camp (1956), Christmas at Lynton Hall (1958), Danger at Calham Cove (1959), Marilyn Investigates (1961), and According to Plan (1963). 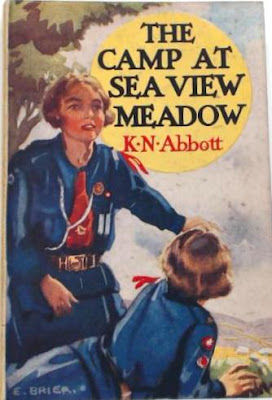 Although the name K. N. Nelson on a single book—The Camp at Sea View Meadow (1929), subtitled "A Girl Guide Story"—wasn't a lot to go on, John Herrington was able to identify her as KATE NELSON ABBOTT, who in 1911 was working as an insurance clerk. Sadly, the reason for her limited output seems to have been that she died in Surrey, aged 56, not long after her book appeared.

That's it for this post. The third and final post about new children's author will be coming soon, and will include several authors who focused on Scotland, a tempting WWI girls' story, and the author of a series about a "hag"…
Posted by Furrowed Middlebrow at 8:05 PM