Here are two books—one quite obscure, the other not nearly so hard to find—that are really perfectly fine, but didn't inspire me to rave about them in my usual style.

BARBARA WORSLEY-GOUGH, A Feather in Her Cap (1936)

This is another book that's been on my TBR list for ages, ever since I came across some reviews of Worsley-Gough's work when I was researching her for my list. She published nine novels in all, including two mysteries—Alibi Innings (1954), which has the relatively unique characteristic of being set in the world of cricket, and Lantern Hill (1957), which seems to take place in the pop music industry. The other novels all appear to be cheerful romantic comedies. A Feather in Her Cap, Worsley-Gough's fourth novel, was the low-hanging fruit, as our local library could easily acquire it. 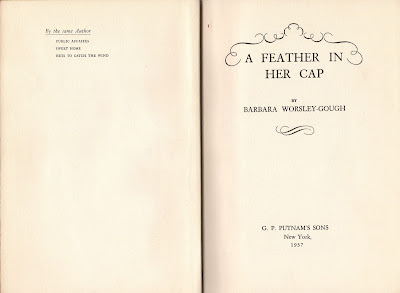 As you can see from the jacket flaps, which were, happily, glued inside my library copy of the book, the plot revolves around a group of perky, well-to-do young Brits travelling to Salzburg, Austria for a music festival. There's the glamorous Delia Temple-Cheyne and her somewhat elusive husband Rupert. There's David Herald, who is allowed to worship Delia and frequently serve as her companion at parties without ever getting too close, and Helen Garland, whose mother is a passionate defender of women's rights but who is herself perhaps a bit more traditional than she'd like to think. And there's Joanna Nichols, a flighty but fun-loving girl, and Michael Park, a slightly surly young man trying to disentangle himself from Helen's mistaken belief that he has fallen for her. 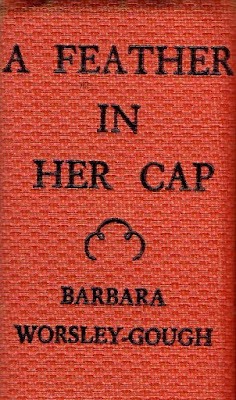 These six young people also encounter Miss Talbot, a prudish friend of Helen's mother's, Mr. Wiggins, a schoolmaster, the cynical American Baroness Birkendorf-Speed and her gigolos, and the fabulously wealthy Venetia, a glamorous friend of Delia's, whose carelessly casual mothering of "the Heir" seems to content him more than his nurses's fussing. Not to mention the controlling Frau Hofer, who runs their hotel and has definite ideas of how illicit romances should be conducted (even if, as in this case, the parties in question aren't actually romantically involved). 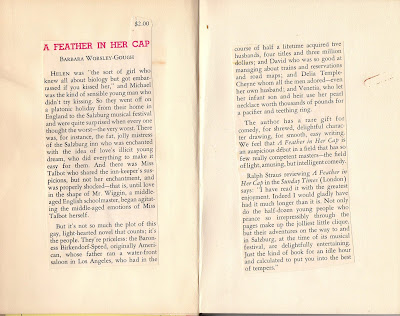 The plot is silly and romantic, full of misunderstandings and youthful exuberance. It's entertaining and sometimes hilarious. In fact, it's a bit like Hemingway's The Sun Also Rises crossed with a screwball comedy. One could see Carole Lombard and Cary Grant in it. And yet, although that sounds like the perfect sort of novel to make me giggle away a Saturday afternoon, there was something missing here. It was a little like watching a well-done school production of Shakespeare, with all the edgier scenes removed and the students charming and smart but somehow lacking charisma. When I started reading it, I expected to find it impossible to put down, but in fact I found it perfectly easy to put down for almost any other distraction.

Considering the time in which this novel was published, and the fact that the festive travellers must pass through Nazi Germany on their way to Salzburg, it's perhaps a little surprising how little any of them are concerned. They mock Hitler a bit, and joke about how any kind of fun is "verboten" in Germany, but ultimately they take the political situation as casually as fun-loving youngsters generally do. One of the Baroness's gigolos does exclaim, "That frightful National Socialism—all that barbarity! It makes me quite ill to think of it," but then cheerfully goes on about his business. And Helen's mother, paying a visit late in their trip, bemoans the fact that Hitler hasn't made the trains runs perfectly on time.

I'll try to give you one giggle from this novel, however. I admit to rather enjoying Venetia's off-hand approach to child-rearing, though today it would certainly lead to the involvement of Child Protective Services. Here's her description of her drive, infant in tow, across Europe:

Venetia, feeling that Michael had not been included sufficiently in the conversation, turned to him and added confidentially "You'd hardly believe how inconvenient a baby is when you're trying to make a good day's run over indifferent roads. The Bentley has bucket seats in front, and at anything over sixty I thought the Heir would bounce out. Finally I put him on the back seat by himself, and put the tonneau-cover on, and bored some holes in it so that he could breathe, and that plan worked far better. The only difficulty was that I forgot to declare him at the frontier, and the German Customs people made a hellish fuss when they found him, and insinuated he was a German baby and that I was smuggling him out of the country. I don't know which of us was the more furious. But I won."

Michael was so much astonished by Venetia's view of her maternal responsibilities that he could find nothing to say except: "Wasn't he suffocated?"

"Of course he wasn't," Venetia replied indignantly. "Do you suppose that I should be sitting here calmly telling this story against the Heir if I had happened to suffocate him? He could breathe perfectly well. The holes in the tonneau-cover were quite large. I made them with a pair of pliers."

I did have such high hopes of Worsley-Gough as perhaps another Elizabeth Fair-esque discovery. But alas, I don't think she is. Back to the drawing-board, or rather, back to the TBR list!

This was one of the books I picked up on our trip to the U.K. last year. If I remember correctly, it was one of two books I picked up at the charity shop by Winchester Cathedral (which, in all fairness, I might have missed completely, had Ruth, aka Abbeybufo, not been very kindly showing us around that day and guided us right by the bookshop). It was reasonably priced, and how could I have resisted it with its intact dustjacket. 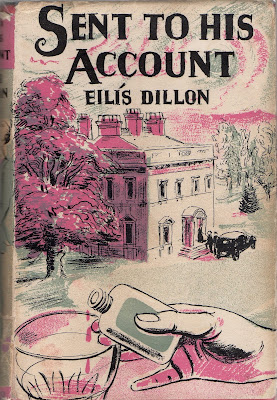 Sent to His Account, as some of you will know, is the second of Dillon's three mysteries, after Death at Crane's Court (1953) and before Death in the Quadrangle (1956), after which she focused on writing non-mystery novels and continuing to write children's fiction. A few years ago, Rue Morgue reprinted all three of her mysteries, and it appears that they are now all available in e-book format as well. I also happened across Dillon's novel The Head of the Family (1960) at one of the Oxfams I visited in the U.K., so you might hear about that one in the future.

Sent to His Account is a perfectly enjoyable mystery. Impoverished Miles de Cogan suddenly finds himself the only heir to a sizable Irish estate, a considerable improvement over the room he's currently renting, complete with cranky landlady. I liked his reaction to hearing some of the details of the inheritance:

"I beg your pardon? Oh, yes, yes." He fumbled among his papers again. "Ah, yes, here we are. First, there is Dangan House-a fine place. I've stayed there from time to time. Not much land—less than two hundred acres." Miles had once tried to have a window-box, but Mrs. Doran had put a stop to it.

Miles happily gives up his old life and takes up the life of a squire, envisioning improvements for the workers on his estate, for the village encompassed by it, and for the village mill that's not being run to its full potential. The complication is a local import from Dublin, a businessman whose plan to open a roadhouse has met with violent disapproval, and when he is found dead of cyanide poisoning in Miles's sitting room, the idyllic new life Miles has planned is considerably disrupted.

There are some interesting portrayals of class tensions here, some entertaining characters, and some very enjoyable humor. It's also interesting to see Miles begin to put his positive changes to work in the village. Sent to His Account was, for me, a considerably better read that A Feather in Her Cap. Yet somehow there just wasn't any real spark here for me either. Is it just that I like my mysteries a little more off-beat, à la Gladys Mitchell? Or perhaps I just prefer mysteries with female protagonists. True on both counts, of course, so others without such biases may want to check this one out. At any rate, I'll be interested to sample The Head of the Family and see how Dillon handles her non-mystery fiction.
Posted by Furrowed Middlebrow at 5:10 AM