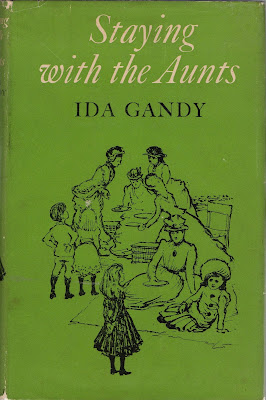 This one was a library book sale acquisition a year or two back, and it has the unique (for this blog) characteristic of being readily available in inexpensive second-hand copies, having been reprinted, along with at least two more of Gandy's books, by Sutton Publishing in 1989.

I think I picked up this book because it reminded me of Gwen Raverat's marvelous Period Piece, which I wrote about here. And while I can't say that Gandy's book is as good as Raverat's (which let's face it is in a class by itself), it is nevertheless quite entertaining and provides similarly revealing glimpses of Victorian life.

Gandy's memoir is focused on recalling the times she and her siblings spent visiting her five spinster aunts near the New Forest. There are a number of humorous moments, but Gandy really isn't trying to be as hilarious as Raverat. Indeed, some of what Gandy the adult is able to understand about what she witnessed as a child is quite poignant. For example, there is Aunt Margaret, the artistic sister, who frequently retires to her room to work on her masterpiece. Over time, it becomes clear that this painting will never be completed:

On the days when inspiration failed she might be seen wandering about the rose-garden in a floppy hat with a deep black veil fluttering down behind, while she snipped off dead roses and looked unusually bent and forlorn. What would have happened had she ever truly finished 'The Wings of the Morning' it is impossible to guess. But the sad truth must be told. What started, I think, as a genuine inspiration, with a certain ethereal quality in the upward-sweeping clouds, became at last a heavy, lifeless picture that could never be finished because the initial impetus had run out long ago. And so it was with Aunt Margaret herself.

Elsewhere Gandy has noted Aunt Margaret's surreptitious gluttony at the tea table, all the while maintaining that she has little appetite. But now we get a glimpse of the frustration for which she is compensating:

Twice in talking of Aunt Margaret I have used the words 'if only'—if only this, if only that. But the biggest 'if only' may perhaps have been her rejection—or her parents' rejection—of her single proposal of marriage. When she was still young an expert arrived to clean the Gainsborough. Encouraged by her interest in his work and by her artistic talent he asked her to marry him. What her personal feeling for him may have been is unknown, but at all events she acquiesced in the decision that a girl in her position could not ally herself with a picture-cleaner.

Had she accepted his proposal the horrid metamorphosis that overtook her might have been averted. As it was, malice and a natural tendency to greed increased. Each week, in the solitude of her bedroom, she devoured a pound of clotted cream sent from Cornwall. Dante, Milton, Ruskin, stood untouched on her shelves. Venus rose unnoticed behind the tulip tree. 'The Wings of the Morning' grew dusty on its easel. Yet still she tried to keep alive an illusion that she moved in an ethereal world that few could enter. 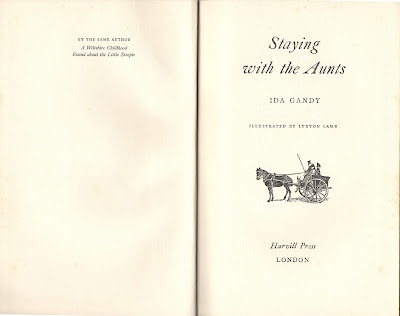 Most of the chapters of the book focus on Gandy's personal recollections of her aunts, and they are interesting and charming. But the final chapter tells of what she learned after inheriting a large number of letters from the sisters' home after the last aunt's death. The letters provide her with some of the missing pieces in her aunts' lives, and this passage, about the stern Aunt Selina, is for me the most poignant of all:

We had often puzzled over why she buried herself so much in her little den, why we heard her laugh so rarely, why she always seemed to be wrestling with God when she prayed. These early letters provided an unhappy clue. For in them I found a saddening picture of a small helpless child washed and beaten by the fierce wave of evangelism that had engulfed her mother and her aunts at this time.

Her mother, just recovered from severe illness, describes herself as 'a brand snatched from the burning', begs her sister to pray that she has not been chastised in vain … .

She was at this time a happy, busy young woman of twenty-eight. Not content with her own conversion she turns her anxious attention on 'little Lin', barely four years old, and talks to her of the 'heinousness of sin'. In this she is backed up by her eldest sister-in-law, then staying at Baverstock. This aunt records in her confession-book her joy at seeing 'the dear child so softened by grace for the sin of disobedience that she was overcome by tears that checked her utterance of "Forgive me, Lord, for Thy dear Son, The ills that I this day have done" ... May she be an example to her dear little sisters, and, cherished by the dews of the Spirit, become a Tree of Righteousness.'

This pious hope reminded me of how I used to liken my Aunt to a closely-clipped evergreen that bore no flowers.

Selina's mother couldn't have become more of a walking, talking Victorian stereotype if she had tried!

Staying with the Aunts is a quick and enjoyable read, and if you have an interest in Victorian family life and in the way children understand and misunderstand the generations that go before them, you may well want to check it out. Gandy's other books include a memoir of her own childhood, A Wiltshire Childhood (1929), Round About the Little Steeple: The Story of a Downland Village and Its Parson in the Seventeenth Century (1960), and The Heart of a Village: An Intimate History of Aldbourne (1975), all of which were also reprinted by Sutton. When the memoir or history urge next hits me, I may have to check out some of those. Gandy also published a couple of earlier children's books, which was enough to qualify her for inclusion on my list.

One little tidbit that I enjoyed in reading this book. Gandy's father was the vicar of Bishop's Cannings, and somewhere along the way he finds himself preaching part of the time in Salisbury Cathedral. I don't pretend to know the ins and outs of church structure or responsibility, or exactly why he would have temporarily been giving services in Salisbury, but regardless, it gives Gandy a vague connection to Edith Olivier, who lived in Salisbury with her canon father. Gandy doesn't specify the dates, so it's hard to know if they would have known one another or even known of one another, but loving Salisbury Cathedral as I do, it's always fun to read about people getting to hang out there.

I should also mention that the illustrations, by Lynton Lamb, are quite charming and sometimes very amusing. I particularly liked this portrayal of one of the children viewing Aunt Margaret's masterpiece—look closely at the expression on her face. 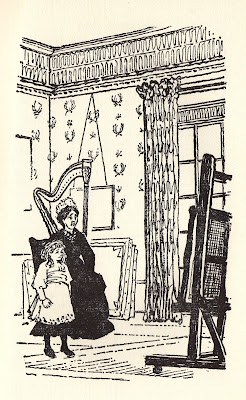 I also like this one of the aunts tucking up their dresses on a walk to keep them from getting mud-spattered. 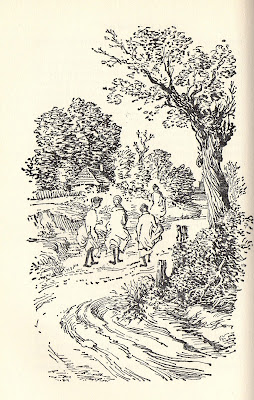 And finally, just one more quotation that shows the changing mores between Gandy's elderly aunts and her own generation:

Sunday at home was one thing; at Eling quite another. To begin with, apart from a ban on tennis and croquet, we could play such games and read such books as we pleased in our Wiltshire vicarage. But there was quite a storm when we took Ludo from the Blue Room cupboard and were caught in the very act of throwing the dice. At home we read what we pleased, but the Aunts only allowed stories with a high moral purpose. The Fairchild Family was a particular favourite of theirs and this posed us with an awkward problem. For my mother always treated it as a humorous work and read it aloud with the sole object of extracting as much amusement as possible from its more ludicrous passages. But the Aunts took it in perfect seriousness.

Has anyone read The Fairchild Family? I recall attempting it at one point, having come across another mention of it somewhere, and very quickly throwing in the towel…
Posted by Furrowed Middlebrow at 5:58 AM