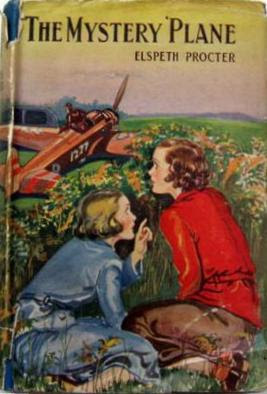 The final batch of new additions to my main British Women Writers list is not filled with exciting discoveries, but there are a few interesting tidbits. Among them, it contains one of my favorite discoveries of the past year (I can't believe it's taken me so long to get her added to the list), and two more authors I came across as a result of my thrift store shopping in the U.K. last year. (I know, I know, this is the last time I'll mention it, I promise—at least for awhile.) 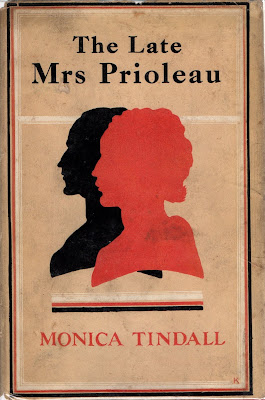 If you're a regular reader of this blog, you've already heard a lot about MONICA TINDALL, whose fascinating only novel, The Late Mrs Prioleau (1946), was reprinted by Dean Street Press as a Furrowed Middlebrow book a couple of months ago. 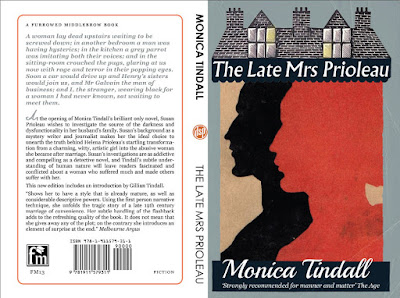 I even ranked it #1 on my 2016 Furrowed Middlebrow Dozen last December. Tindall was the sister-in-law of Ursula Orange, three of whose novels were also reprinted by Dean Street, and she was the aunt of acclaimed author Gillian Tindall, who wrote the informative introduction to Dean Street's edition of The Late Mrs Prioleau. It's an underrated gem. 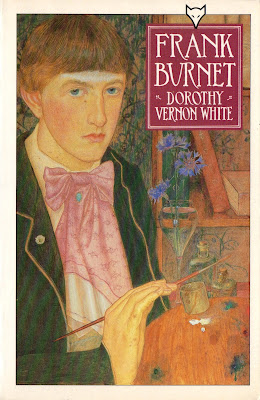 Of the two authors unearthed in Oxfam shops last year, I actually acquired a book by DOROTHY VERNON WHITE. I have Frank Burnet (1909) patiently waiting on the top shelf of my TBR bookcase, but I seem to keep checking other books out from the library, so I still haven't managed to read it. However, White is an intriguing figure. She published two other novels—Miss Mona (1907) and Isabel (1911)—so she just squeaks into my list's time frame. Her Times obit describes Frank Burnet as "a moral fable about weakness and strength of character, written with great intelligence and gusto." At age 30, she married William Hale White (who wrote fiction as "Mark Rutherford"), 45 years her senior. He died only two years later, after which she stopped publishing fiction. However, her Times obit also singles out The Groombridge Diary (1924), an account of their life together, as a particularly interesting work. For many years, too, White took Bible classes for impoverished youths, and she wrote about those experiences in Twelve Years with My Boys (1912). 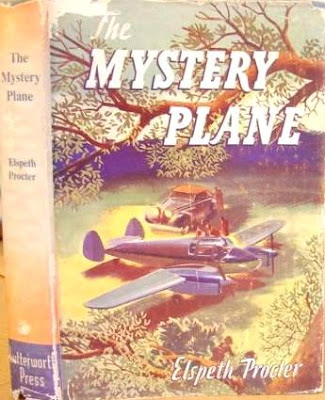 On the other hand, I didn't pick up the book I came across by ELSPETH PROCTER, which might be just as well seeing as how the majority of her books turn out to have been Bible-related tales for younger children. The Mystery Plane (1935) looked somewhat entertaining, and it might well be, but I decided I could live without it. Her other books for older children include Shipwreck Bay (1938), The Pony Trackers (1952), and The Treasure Riders (1955). Has anyone come across any of these?

In one of the earlier posts in this series, I had the mysterious D. Katherine Brereton, whose one book, The Savages on Gale Island, doesn't appear to exist in any of the major library catalogues. Sue Sims helped shed some light on the mystery, by noting that that book's publisher, Spring Books, doesn't seem to have bothered to send their books to the major libraries. I have a similar mystery author in this post, and what do you know? She's also published by Spring Books. JOYCE BEVINS WEBB also published only one book, the school-themed The Clue in the Castle. That book is also in neither the British Library catalogue or Worldcat, but Barbara at Call Me Madam tracked down a copy and discussed it here. She described it as "a mad web of intrigue and coincidences," which apparently include a 29-year-old woman masquerading as a schoolgirl.

And speaking of Sue, I somehow missed adding JEAN URE to my list until now, despite the fact that she was clearly listed in Sims and Clare's Encyclopaedia of Girls' School Stories. Her first book, Dance for Two (1960), a ballet story, just barely qualifies her for this list, so perhaps that's how I missed her. Sims & Clare note the tremendous range of Ure's children's fiction, which includes a number of later examples of school stories. The Girl in the Blue Tunic (1997), for example, contains "one of the very few real ghosts to be found in school stories." For adults, Ure also published nearly two dozen romantic novels, including a series of Georgian romances under the pseudonym Sarah Mcculloch. 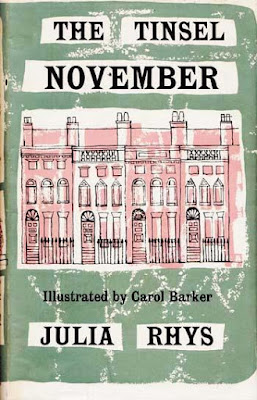 There are two more authors in this batch who are best known for children's fiction. JULIA RHYS published only two books—Crab Village (1954) and The Tinsel November (1962). The latter is described as: "A fantasy tale of a gloomy All Hallow's Eve, an old English house, some mysterious antique marionettes and a magical time of dark November days which will usher in the candle-glow of Christmas." 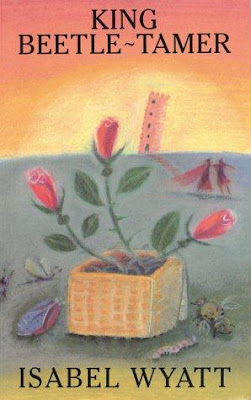 ISABEL WYATT, meanwhile, is known mainly as a popular reteller of legends and folklore for children, including The Book of Fairy Princes (1949), Seven-Year-Old Wonder Book (1958), The Dream of King Alfdan (1961), King Beetle-Tamer and Other Lighthearted Wonder Tales (1963), and The Witch and the Woodpecker (1970). She also published non-fiction analyses of Shakespeare and the legends of King Arthur. Two early titles—Maid's Malady (1930) and Cheese Carnival (1934)—appear to be novels, but little information is available beyond the fact that the former may be a dialect novel set on "the moors." 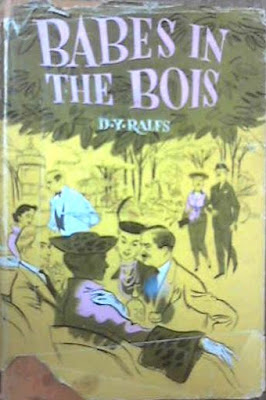 Of the remaining authors, I find myself most intrigued by D. Y. RALFS, who published four novels—Alex and Me (1952), The Reluctant Lovers (1954), Babes in the Bois (1956), and Find Me a Daughter (1958). The Reluctant Lovers deals with the romance of a widow with her boarder, a widowed military man, and the complications their respective families cause, while Babes in the Bois, which has an irresistible cover illustrated by Virginia Smith, is about a middle-aged couple's first trip to Paris. Future ILL requests, I suspect. 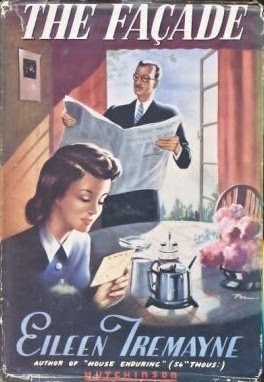 VALENTINE TRAIL was the author of four novels, of which little seems to remain except largely negative reviews. Titles are David Armstrong's Curse (1904), John Paxton: Gentleman (1907), Was He a Coward? (1909), and The Mock Brahman (1931). Of the first, The Publisher's Circular said, "The story is badly written and as amateurish a performance as we have read for many a long day." Ouch.

What I know so far about EILEEN TREMAYNE doesn't inspire much more interest. Reading 1900-1950 reviewed Those Who Remain (1942) here. In The Flyer: British Culture & the Royal Air Force, 1939-1945, Martin Francis described Four Who Came Back (1941) as "a socially conservative novel, in which the heroes are officers from affluent families and the villain a pregnant working-class ATS typist, who wrongly accuses an army lieutenant of being the father of her child, in the hope of gaining his family's money." Hmmm. Perhaps not my cup of tea. She published eight other novels as well. 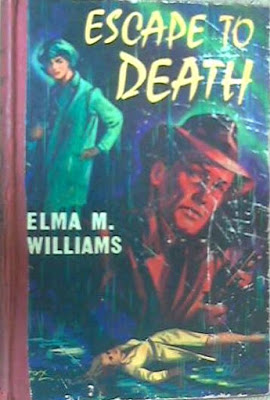 ELMA M. WILLIAMS was recommended for my list by David Redd (thanks, David!). She is one of numerous authors on my list who might be more interesting for their non-literary work than for their writing. Her 16 volumes of fiction appear to be mainly romantic thrillers, along with one children's title, Paul's Secret Courage (1967). But once she started earning money from her books, she acquired a hill farm in Wales and created an animal sanctuary, Pant Glas, which overlooked Dovey Estuary. She began publishing memoirs about her life among the various animals, and became even better known than for her novels. Those titles include Pig in Paradise (1964), Animals Under My Feet (1965), Heaven on my Doorstep (1970), and Ride a Cock Horse (1971). 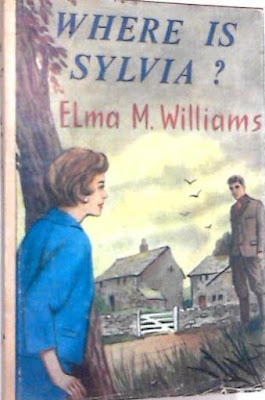 I have some doubts about whether LOUISE ROURKE belongs on my list, but I decided to include her until I know for sure. She may have been born in South Africa, and she certainly seems to have wound up in Canada, as The Land of the Frozen Tide (1928) is a memoir of her life in Fort Chipewyan in Northern Canada. Her only novel is The Tree's Shadow (1930), which was included in a list I came across of works dealing with the Canadian prairies, but other details are lacking.

There's little to say about the final three authors in this post. AUGUSTA A. SMITH wrote three novels in all—The Fawcetts and Garods (1886, under her pseudonym), Matthew Tindale (1891), and the much later She Was His Wife (1936). The last was reviewed here. LILLIAS WASSERMANN was apparently a journalist and wrote nearly a dozen works of fiction, including several co-written with one Isabella Weddle (all too early for Weddle to get her own entry on my list). Wassermann's final novel, The Rest Cottage (1923), earns her an entry here.

And finally, E. KANE WEBB, real name Eileen Mary Webb, publishing four novels. Quinton's Rock (1927) and The Golden Chance (1931) are listed in Hubin as having a crime element, but no details are available. The others are The Shining Path (1924) and Temple, K.C. (1928).

Thus this post runs the gamut from some very interesting authors to several about whom too little is known to muster up much excitement. It's still always fun for me to come across them all, though, even if I don't feel compelled to rush right out and read their books.
Posted by Furrowed Middlebrow at 1:12 PM