The suitcase full of books

Now that I told you about the sightseeing on our trip to the UK, it's time to get back to all those books.

I started to title this post “What I bought on holiday,” but then I remembered that I didn’t actually buy all the wonderful books in the pic I posted last weekend. No, that doesn’t mean that I robbed an Oxfam shop (though I did get an earful from a bookseller in Cambridge about how Oxfam and other charity shops are robbing other bookshops of all their business—I can’t swear to the truth of that, but it certainly seems that they would be tough competition). Rather, it means that no fewer than seven of the books came from my delightful time in Cambridge meeting up with Gil, as mentioned in my last post. 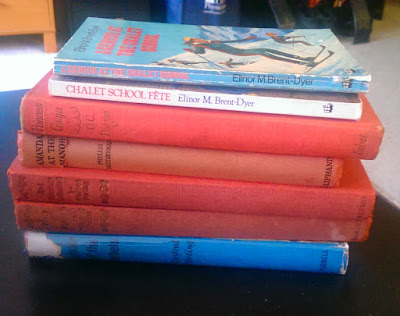 Although I don’t think I’ve written about it here in awhile, Gil remembered my interest in girls’ school stories, and she dipped into her storeroom of “extra” books (just imagine!) and brought me not one or two, but seven. Of WINIFRED NORLING, Sims and Clare, in their Encyclopaedia of Girls’ School Stories, said “A Norling story is rarely boring, even if it is never believable,” which sounds rather irresistible to me. Meanwhile, PHYLLIS MATTHEWMAN was a friend of Elinor Brent-Dyer, and her books, again according to Sims and Clare, are often focused on “the domestic drama of school life,” which sounds right up my alley. And OLIVE DOUGAN apparently subtly subverts some of the routine elements of school stories, which makes her highly intriguing as well. And of course I was delighted to have two more Chalet School books which I hadn’t yet added to my (considerably growing—I need to report on that soon!) collection.

I should really also give Gil credit for one more of my bargain acquisitions, as it was she, in a bookshop in Cambridge, who unearthed a copy of DORITA FAIRLIE BRUCE’s The Best House in the School, slightly bedraggled but with dustjacket intact—the first book from her Springdale series to make its way into my collection. Thanks for all of these lovely additions to my library, Gil! 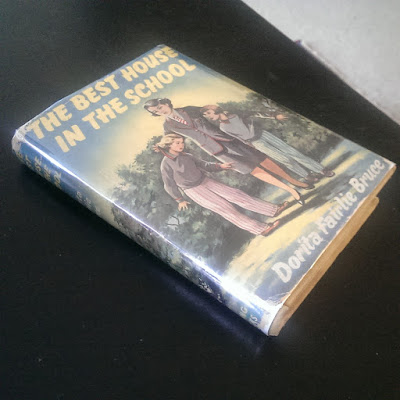 For the most part, I don’t remember which of the many books I bought were purchased in which spot. We managed to find Oxfam bookshops practically everywhere we went—even tour stops like Harrogate and Skipton and Alnwick—not to mention the occasional Amnesty International bookshop or the book sections of Cancer Research UK, Aging UK, British Heart Association, Shelter, and a few more types of charity shops. There was nary a day that went by that one or two books didn’t find their way into the small backpack we carried with us each day—just ask Andy, who bravely soldiered on and carried the bag more than his share of the time despite the weight I’d added to it!

But I do vividly remember one of the Oxfam bookshops, and at the risk of causing a stampede of fans of children’s fiction into the lovely streets of York, I will note that I nearly had heart failure walking into the shop on Micklegate and saw not just a shelf of vintage children’s books, not two shelves, but an entire bookcase dedicated to them. And most of them had dustjackets intact. Goodness. Needless to say, I spent quite a bit of time there, getting my first glimpse of the cover art of a good many books I had only heard of previously, jotting down a few authors I had never heard of, and trying to refrain from buying up every single book in sight. It wasn’t so much the cost that would have been involved (dirt cheap compared to the market rate for most of the books), or even the need for four suitcases to get them home, but the thought of our one bedroom apartment and the already very limited shelf space available—that’s what caused me to exercise what I believe was admirable restraint in only purchasing six books there. These were supplemented later in the trip with three more children’s books. 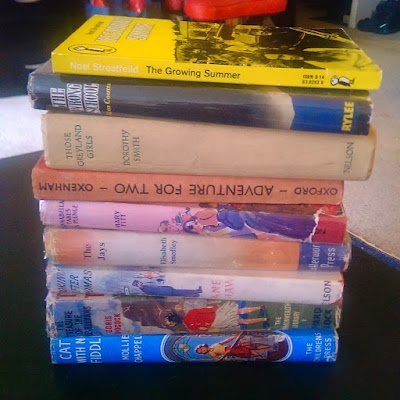 I won’t give such a dramatic buildup to the other purchases. There was really nothing quite so amazing at any other shop—at least excepting Edinburgh Books (see below). But I was happy to accumulate several more Viragos, and I didn’t even realize the ELLEN WILKINSON book had been reprinted by Virago because I had never laid eyes on a copy before, so that was a fun one to come across. 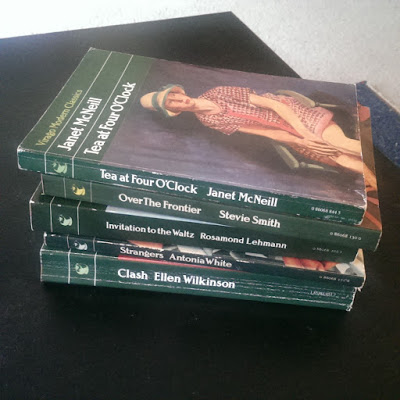 I added my very first Folio edition to my library, to replace a scraggly paperback of BARBARA PYM’s Excellent Women (despite the fact that Pym and I haven’t been on such good terms lately). 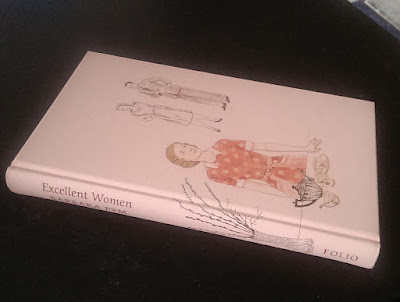 I found quite a few enticing hardcovers, mostly with dustjackets, but none of these was as enticing as JANE DUNCAN’s My Friend Muriel. Duncan’s books have now been released as inexpensive e-books, and this hardcover was one of my priciest acquisitions of the trip, but honestly, could you have resisted this jacket art? 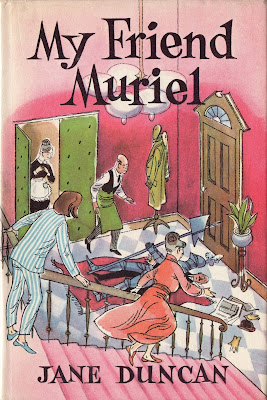 I’m not a huge fan of MARGUERITE STEEN, but the book was dirt cheap and featured an author photo I’d never seen before, so I had to add it to the mix, though I have to admit the message "from the author" is a wee bit offputting.

And the JEAN RHYS book was the very first purchase of the trip, from the little charity shop at Bodiam Castle. There, the lovely dustjacket called out to me as well. 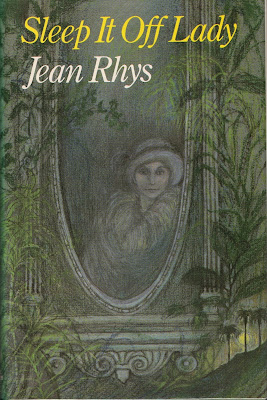 I admit I bought the JOY PACKER novel because I’d never heard of her, but alas, she turns out to be South African. I’m just finishing reading the book now, and it’s no great shakes, but it is intriguing in some ways. And the CATHERINE PONTON SLATER book, Marget Pow, was mentioned a while back by Peggy Ann at Peggy Ann’s Post (the first I had heard of Slater), so I couldn’t pass that one up either. 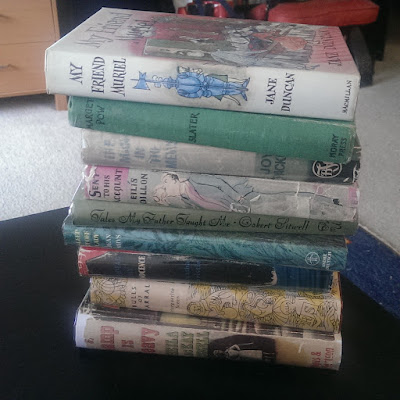 My most exciting paperback acquisition was that vintage Penguin edition of MARGHANITA LASKI’s The Victorian Chaise-Longue. I already had a copy, but couldn’t pass up a second one (it’s small, how much shelf space can it require?). I picked up several mysteries I’ve been meaning to read, including the one by Anthony Gilbert, aka LUCY BEATRICE MALLESON. And I had to grab the DOROTHY VERNON WHITE, because the author bio makes it clear that she belongs on my Overwhelming List. 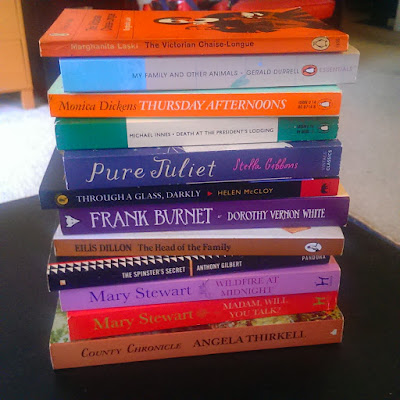 Finally, since I know that some of you are fans of D. E. Stevenson (as am I), I had Andy try to capture the majesty of a shelf or two at Edinburgh Books in (obviously) Edinburgh, one of the last bookshops we visited. It wasn’t easy in the cramped space, but perhaps this will give an idea. 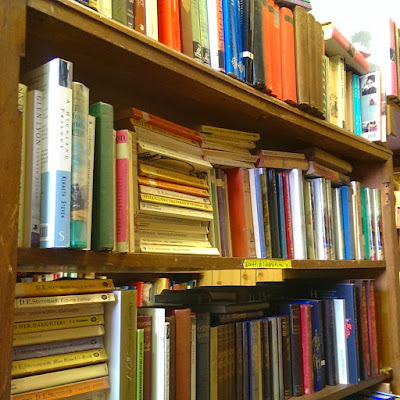 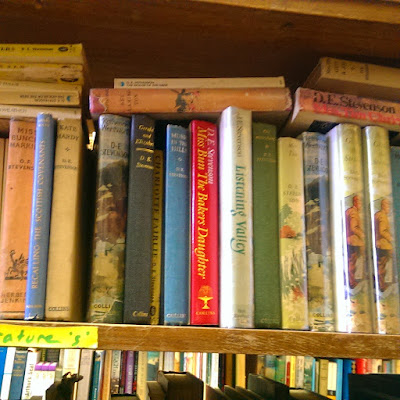 Amazingly, as you may have noticed from my book stack, I didn’t actually purchase any DES. Astonishing, no? I actually either already had copies of most of the books or was a bit too stingy to spring for DES’s collector prices. But it was quite a joy seeing so many of them together in a book shop.

What I did purchase at Edinburgh Books, however, in their entire room dedicated to Scottish-themed books, were several books by ISABEL CAMERON. Perhaps I will come to regret this, I’m not sure, but I couldn’t resist sampling a few books by this author who was once apparently a major bestseller but is now almost totally forgotten. I’ll no doubt be reporting back on whether this was a frivolous purchase or an inspired one. 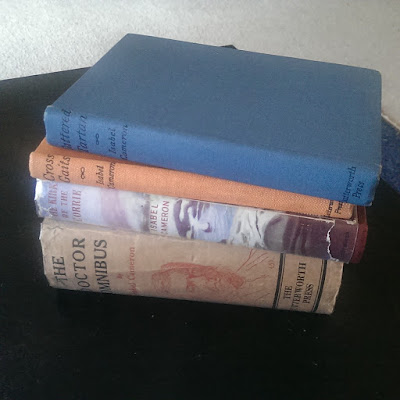 And that’s that. I might perhaps be sharing more of the jacket art in future posts, but this is quite enough for now.

But the best part of the story is that while the Oxfam shops may have done most of this damage to my wallet and to the space constraints in our apartment, they also redeemed themselves by coming through with the extra suitcase required to bring these books home. For four measly pounds, we bought a sturdy if unattractive green suitcase, and we managed to maneuver three roller bags and two shoulder bags through the airports and safely back to SF with all the books intact and the dustjackets unscathed. Whew!

Now to find room for them all. Do we really need a refrigerator, do you think?
Posted by Furrowed Middlebrow at 12:42 PM