Every six months or so, when the Friends of the San Francisco Public Library Big Book Sale has taken place, I find myself saying that the sales are just not as good as they used to be. And then, of course, I post photos of all the bounty, thus seriously calling into question my own complaints. This time is no exception.

I still say that, as far as finding books by authors on my Overwhelming List go, the sales aren't what they used to be. Are there just more people looking for these authors than there used to be? Is the library getting savvier about the demand for some of these books and opting to sell them online instead of putting them in the sales for dirt cheap? Whatever the reason, there have been sales in the past from which I have returned with books by a dozen or more of "my" authors, while this time I found only four. Now admittedly, I can't complain a lot, since this is what I came lugging back to our apartment this past Tuesday evening: 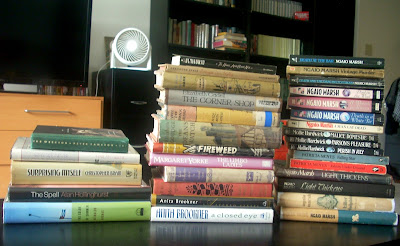 Not a bad haul by any standard, especially for a grand total of $65, considerably less than I always budget for these sales. But still, a vague discontent…

Now, first and foremost, I always have to acknowledge how wonderful and patient Andy is at these book sales, where there is really nothing of interest to him (except perhaps the amusement of watching book geeks pouring over the tables like WWII minesweepers—I really think he might quite successfully start a blog about the trials and tribulations of life with an obsessive compulsive book fetishist). The whole event is pure self-indulgence for me. As I've also mentioned before, I always give Andy a more or less hopeless list of authors to look for, and after all his diligence he's lucky to find even two or three books. 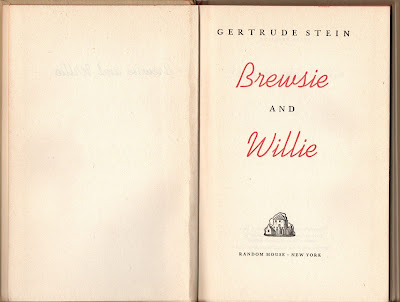 But THIS time, I have to acknowledge that he came through in flying colors with what, for me, might be the best find of the sale. I doubt if very many of you are fans of the rather bizarre experimental works of Gertrude Stein, but she's a fave of mine, so try to imagine my excitement at now having what certainly appears to be a first edition of one of the final books published in her lifetime—1946's Brewsie and Willie. Stein wasn't even on Andy's list, but he knows I love her and grabbed it anyway. This even surpasses the year he picked up a first edition of Elizabeth von Arnim's Mrs. Skeffington just because it "looked like a book I'd want". 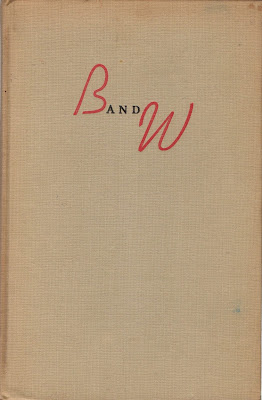 I used to regularly put Elizabeth Cadell on Andy's list, but it had become so hopeless in recent years that I didn't include her this year. And of course, what happens? I come across two of them, both ex-library and a bit the worse for wear, but also both from the prime of Cadell's career and still including their irresistible dustjackets. 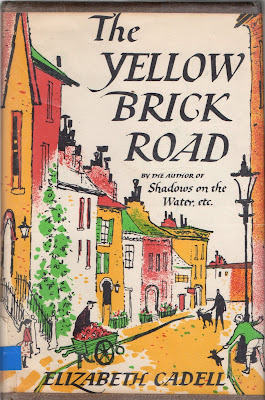 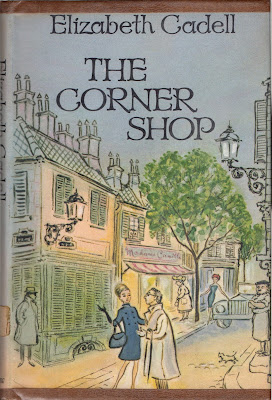 I read The Yellow Brick Road a few years ago when I got it from the library, and I've heard good things about The Corner Shop, so I'm very pleased to add that one to my TBR shelf. And here are completely gratuitous scans of the jacket flaps:

Margaret Yorke has been on my list now for quite some time, but until Tuesday I believed she only wrote mysteries. But The Limbo Ladies (1969) certainly doesn't sound like a mystery: 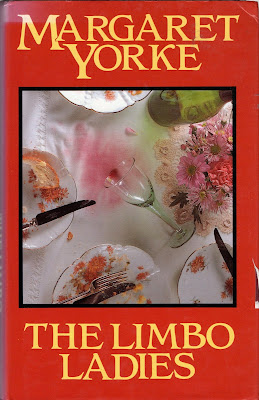 It's only a 1990s American reprint, and it could turn out to be a little too 60s-ish and angst-ridden, but I'm looking forward to finding out. After which perhaps I'll sample one or two of her mysteries. Here's the description from the jacket:

The most pristine book I found by an author from my list is undoubtedly Elizabeth Goudge's The Dean's Watch (1960)—not even a book club edition, not price-clipped, not ex-library, and complete with an almost perfect dustwrapper. It's a keeper! 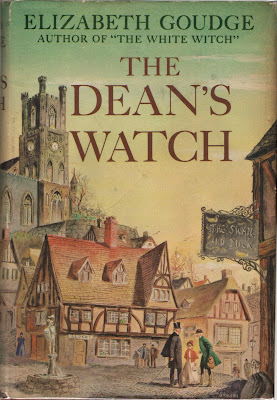 As you can see from the picture of my stash, I also stocked up a bit on mysteries, which are always only $1 each at these sales. Here's where I found two new-to-me titles by Patricia Moyes, the fourth and last of the authors from my list that I came across: 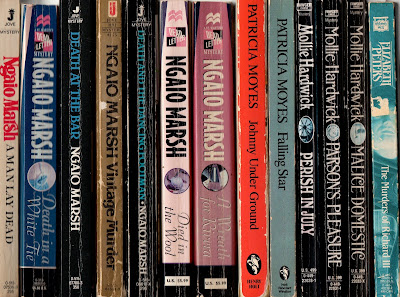 And I went into this sale newly enthusiastic about Ngaio Marsh, having recently read another of her books. I'm a big fan, but for some reason I've only got round to 8 or 9 of her books thus far. So I added her to Andy's "look for" list, and as you can see he exceeded expectations there as well!

I added 10 new Marsh titles to my bookcases in all, but I actually bought 11 books. I'm almost ashamed to admit that you'll see two copies of Marsh's final novel, Light Thickens, in my pile. One has a lovely intact dust jacket but rather small print, and seems like a lower-quality book club edition: 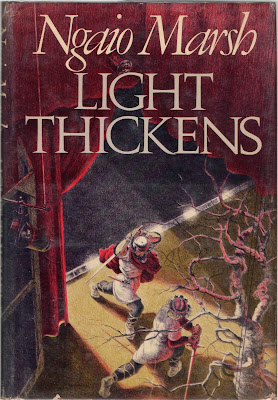 The other is a pristine, sturdy hardcover with large reader-friendly type but, alas, is missing a dustjacket. If only the jacket of the first would fit the second, I'd happily make the switch (it wouldn't be the first time I've bought books just to claim the dustjacket), but alas the size is not a match. I was mulling it over in the midst of the book sale frenzy, trying to decide between the two, when Andy quite lucidly said, "For Pete's sake, it's two dollars, take them both!" So now I can mull the problem at leisure. 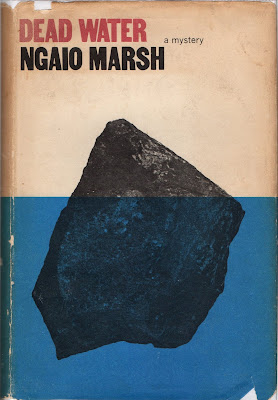 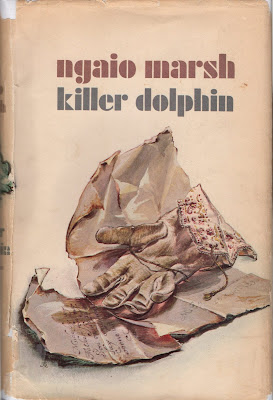 I've never read Mollie Hardwick, a more recent mystery writer whose books seem to be on the cozy side and are set in the Lake District, but how could I resist a tidy starter kit of three of them—including the first two books in the series—all waiting for me in a little cluster on one of the mystery tables? And I'm pretty sure one or more of you have recommended Elizabeth Peters's The Murders of Richard III to me based on my adoration of Josephine Tey's The Daughter of Time. I actually started reading Murders on Tuesday night, in the afterglow of the sale, and will be finishing it today. I'm devouring it, so you might hear more about it here… 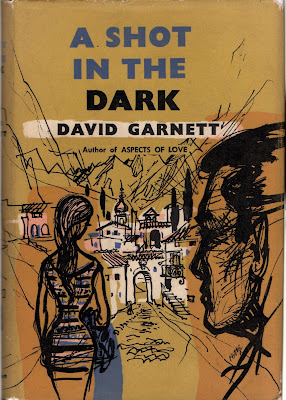 Also relevant to my list is my irresistible new copy of David Garnett's A Shot in the Dark. This novel comes from late in Garnett's career—it was his follow-up to Aspects of Love (best known for inspiring one of the least successful Andrew Lloyd Webber musicals of all time) and came more than three decades after his most famous work, Lady Into Fox.

Ironically, just a day or two before the sale, I was reading about Garnett and the rest of the Bloomsbury gang, because I was drafting a post including Garnett's first wife, Ray, who published a single enticing children's book and was added to my list in my recent update. I thought I knew a bit about Bloomsbury, but little did I know the complexities surrounding Garnett and his second wife! 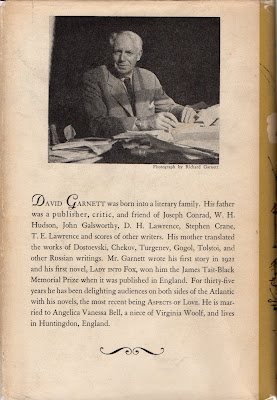 Let me see if I can sum up: after Ray Garnett died of breast cancer in her 40s, David married Angelica Bell, daughter of Virginia Woolf's sis, Vanessa. Vanessa was married to Clive Bell, but their relationship was, let's say, non-restrictive, and she was also lovers with artist Duncan Grant, who was actually Angelica's father, was bisexual and, at the time of Angelica's birth, was also in a serious relationship with a man named…wait for it…David Garnett. Garnett was even present at the birth of his future wife. Now, I am all in favor of non-traditional relationships and experimentation and challenging of norms, etc., etc., but I wonder a bit how these folks kept it all straight in their heads. And how did one, invited to a dinner party, say, with Vanessa, her husband, her lover, her lover's lover, and her daughter who will one day marry her lover's lover, navigate the potential minefields that even the simplest conversations must have hidden? (Plus, truth be told, all was perhaps not rainbows and kittens for Angelica herself growing up in such circumstances, as she apparently makes clear in her memoir, Deceived With Kindness, which is now on my TBR list as well…)

But I digress. While mentioning non-heterosexual relationships, I also picked up a few gay-themed titles that I recall from my mis-spent youth and thought I might dip into again someday. And a couple of other strays that I haven't read since college also leapt into my granny cart—a tidy paperback of Hemingway's To Have and Have Not and a decent copy of Walker Percy's The Moviegoer, which I've been meaning to re-read for a decade or so. And I grabbed a charming little hardcover of André Gide's Two Symphonies—I'm bewildered by the lack of availability in English of some of his lesser-known works, and this has two of them, so for three bucks it was an easy decision. 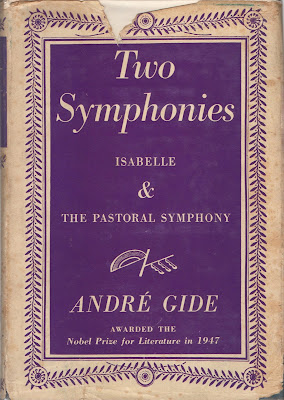 In the past year or so, Jill Paton Walsh has really been haunting me. First, there were recommendations to read her continuations of Dorothy Sayers's Peter Winsey/Harriet Vane detective series. Then, someone alerted me that one of those, A Presumption of Death, has a wartime setting so belonged on my WWII book list (I still haven't read it, but I intend to). Then, I discovered her charming Imogen Quy series (alas, only four novels in all), featuring the nurse of a fictional college at Cambridge, and devoured all four of them in rapid succession. And then, her early novel Lapsing was recommended for my Grownup School Story List. 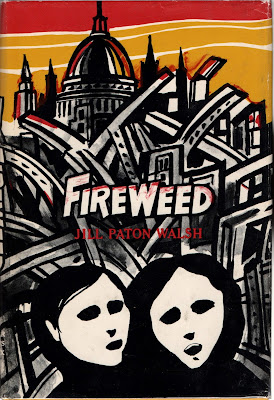 But somehow, even after all that, I had missed any reference to her early children's title Fireweed (1969), until I stumbled across it on Tuesday. It's very clearly set during WWII, following two teenagers in London during the Blitz, and therefore also belongs on my WWII list, and I'm delighted to have a very well-cared-for copy of it.

Finally, it's sad that when a prominent author dies, there's always a sudden surge of interest in their work—which, in some cases at least, they might really have appreciated while they were alive. I hope that's not the case with my acquisition of two lovely Anita Brookner novels. 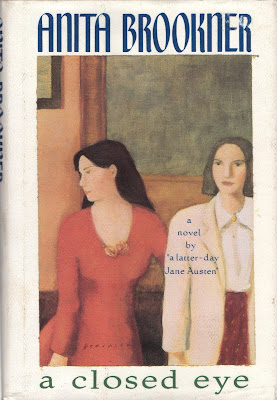 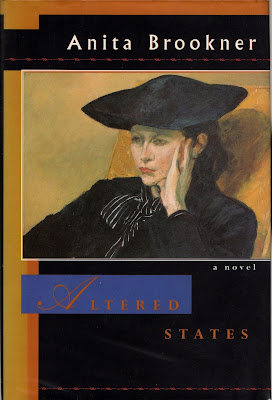 In all honesty, I've been meaning to get back to reading Brookner for ages—I loved Hotel du Lac a few years ago, but somehow never followed it up. But the sad news of her recent death may in fact have inspired me to add these to my library.

And that's it. How do you think I did?
Posted by Furrowed Middlebrow at 10:20 AM