Back in July, I did a post about the tragic Dorothy Wynne Willson, who published a single, quite successful and critically acclaimed novel at the ripe old age of 21 and then tragically died of influenza just a few months later. Not long after that, researcher John Herrington, who tracks authors who have fallen into obscurity, sent me information about another author whose story is just as tragic. As it happens, I haven't even had a chance to add her to my Overwhelming List yet, but she'll definitely be part of my next update.

It seems that Molly Spencer Simpson, who was born in Gravesend in 1915, was only 17 years old and working in a shop when she decided to try her hand at writing fiction. Two years later, her first thriller, called Crooks in Cabaret (1935), was accepted and published by Nicholson & Watson under the name Spencer Simpson (presumably to give the impression that it was written by a man). That book was apparently successful enough for her to leave the shop behind and begin writing full-time, producing a second novel, entitled The Four Dead Men, the following year.

Now, you know how intriguing obscure writers in general are to me, but an obscure author of thrillers particularly piqued my interest, and I know there are a lot of mystery/thriller fans out there who may be intrigued by these titles. Information about Simpson's first novel is sparse, but the publisher's blurb for The Four Dead Men reads as follows:

The Four Dead Men were dead only legally. In reality they were vitally alive. They were four men who had been betrayed and disgraced—an American, a Frenchman, a German, and an Englishman, Keith Stratton. They banded together and swore an oath of vengeance against all enemies of society. Having been broken by the law, they now broke the law to destroy those who abused and degraded it.

Keith was the last to join, fascinated and comforted by their informal methods of justice. The Four Dead Men come to England to avenge his disgrace, find more than one mystery to solve, gamble with death and the shadows of death. Only men sworn to revenge, with courage born of madness, could carry out this terrific resolve.

I was happy to find that a library copy of this novel could be got at, and I was holding a copy in my hot little hands within about a week of John's original email. As it turned out, although I thought Simpson's writing was excellent (especially considering her age), it just wasn't quite my cup of tea—a bit too noir-ish or Jimmy Cagney-esque for me—and I decided to move on to other things without finishing the book. But I'm still very happy that I tracked it down, because now I can share a taste of it with you lovely readers, some of whom may well find it a tantalizing must-read. 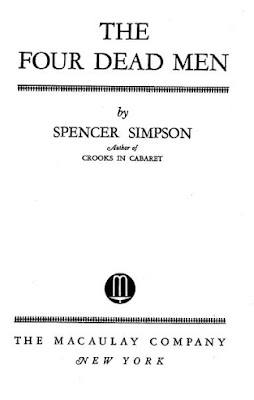 Here's a snippet from the early pages, which gives an idea of the tone:

Things began to look nasty. The infuriated men were all round him. But there was little science in their attack, and profiting by that, he managed to knock the two foremost men's heads together, though stopping a hefty blow with his own chin during the process.

"Come on, my lads," he invited, then recoiled from the flash of steel as his foremost attacker snatched out a murderous-looking clasp knife.

"Good Lord," Keith muttered, then flung up his arm defensively as there came a loud report. The knife crashed to the floor, and its startled owner leapt back with an oath, wringing his fingers.

Keith stared incredulously. On the threshold stood a tall man, holding a smoking automatic. He surveyed the scared group with a smile, then looked at Keith. "If you have finished, monsieur, perhaps you will come out," he suggested.

He collected his peaked navy cap, bowed to the white-faced Marie-Heloise, and joined the stranger in the doorway.

"Precede me, monsieur," said the latter, and, as Keith complied, he backed after him along the alley, the revolver still levelled.

Once out in the street he gripped Keith's arm.

"Quickly!" he cried, and began to run.

I have to admit, reading that passage over now, I am sort of regretting that I didn't keep reading…  If anyone does track down the book and read it, please do let me know what you think of the entire thing.

At any rate, the books were apparently quite well-received and successful, and there would have been every reason to expect that in a few more years Simpson would have been, if not a household name, at least a lending library favorite. Who knows how much her style and plotting abilities might have improved with experience and maturity? 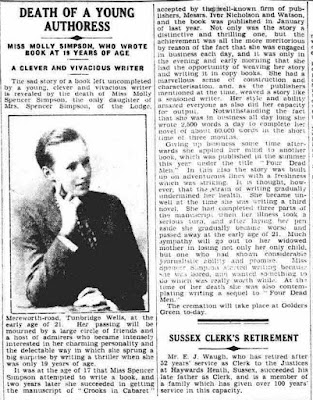 However, according to the obituary that John found, she apparently fell ill while working on her third novel: "It is thought, however, that the strain of writing gradually undermined her health." The obituary doesn't provide any details of her illness, so we are left to speculate. It seems to imply that her illness went on for a while, so perhaps influenza isn't the culprit this time around, but that still leaves tuberculosis, pneumonia, and any number of other possibilities. Whatever the case, she died in September of 1936 at the age of 21. And although the obituary doesn't mention this tidbit, John's research led him to the additional tragic fact that she was an only child and that her mother had been widowed only a few years before. 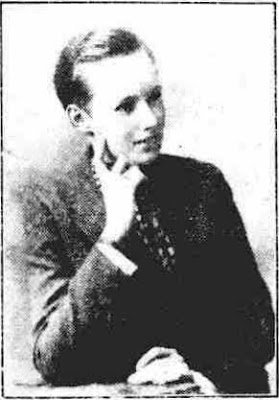 I'm including in this post both Simpson's complete obituary (as well as, at the bottom of this post, my own transcription of it, in case it's too difficult to read from the photo), which appeared in the Sevenoaks Chronicle on October 2, 1936, and also a blown-up version of the author photo, which shows the young author looking intriguingly masculine. The photo, combined with what struck me as a quite masculine style of writing, makes me wish it were possible to retrieve additional details about Simpson's life. Had she survived and had a successful writing career, would she have emerged as a fascinating "eccentric" (practically always a coded word in those days) along the lines of Radclyffe Hall or Nancy Spain? But unless a family member remains who knew Simpson as a child, or unless a written record by Simpson or someone who knew her exists, we will probably never know much more than what her obituary tells us: She was a promising, obviously ambitious and driven, young author whose life and career ended before it had really begun.

Here is the complete text of Simpson's obituary, from the October 2, 1936 issue of the Sevenoaks Chronicle:

DEATH OF A YOUNG AUTHORESS

MISS MOLLY SIMPSON, WHO WROTE BOOK AT 19 YEARS OF AGE

A CLEVER AND VIVACIOUS WRITER

The sad story of a book left uncompleted by a young, clever and vivacious writer is revealed by the death of Miss Molly Spencer Simpson, the only daughter of Mrs. Spencer Simpson, of the Lodge, Mereworth-road, Tumbridge Wells, at the early age of 21. Her passing will be mourned by a large circle of friends and a host of admirers who became intensely interested in her charming personality and the delectable way in which she sprung a big surprise by writing a thriller when she was only 19 years of age.

It was at the age of 17 that Miss Spencer Simpson attempted to write a book, and two years later she succeeded in getting the manuscript of "Crooks in Cabaret" accepted by the well-known firm of publishers, Messrs. Ivor Nicholson and Watson, and the book was published in January of last year. Not only was the story a distinctive and thrilling one, but the achievement was all the more meritorious by reason of the fact that she was engaged in business each day, and it was only in the evening and early morning that she had the opportunity of weaving her story and writing it in copy books. She had a marvellous sense of construction and characterisation, and, as the publishers mentioned at the time, weaved a story like a seasoned writer. Her style and ability amazed everyone as also did her capacity for output. Notwithstanding the fact that she was in business all day long she wrote 2,500 a day to complete her novel of about 80,000 words in the short time of three months.

Giving up business some time afterwards, she applied her mind to another book, which was published in the summer this year under the title "Four Dead Men." In this also the story was built up on adventurous lines with a freshness which was striking. It is thought, however, that the strain of writing gradually undermined her health. She became unwell at the time she was writing a third novel. She has completed three parts of the manuscript when her illness took a serious turn, and after laying her pen aside she gradually became worse and passed away at the early age of 21. Much sympathy will go out to her widowed mother in losing not only her only child, but one who had shown considerable journalistic ability and promise. Miss Spencer Simpson started writing because she was bored, and wanted something to do which was really worth while. At the time of her death she was also contemplating writing a sequel to "Four Dead Men."

The cremation will take place at Golders Green to-day.
Posted by Furrowed Middlebrow at 7:17 AM