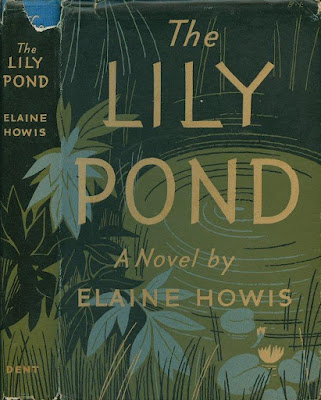 Whenever I'm working on a new update to my Overwhelming List, I always come across new-to-me authors whose work I'd like to sample—which is why I sometimes think that my personal TBR list is the really overwhelming one. The authors I like, as you know, include mystery writers, children's authors, and memoirists, as well as novelists. But since one of the original purposes (in theory) of my blog was specifically to document middlebrow fiction by women, I felt I should single out a few that seem to particularly fit the bill. 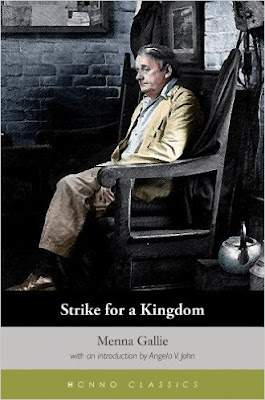 One of these seven women, Welsh writer MENNA GALLIE, whom I already mentioned in my post on mystery writers added to my list, is probably the least obscure due to the fact that most of her novels have been reprinted by Honno Press. One critic cited by Honno on their website called Gallie's novels "beady-eyed, bawdy-tongued entertainments calculated to stir recognition in women and discomfiture in men (were they to read it)." Apart from her first novel, Strike for a Kingdom (1959), which I already mentioned in my mystery post, Gallie published five other novels. Apparently, Man's Desiring (1960)—"a gentle comedy of contrasts about a Welsh man and an English woman at a Midlands university"—belongs on my grownup school story list, and Travels with a Duchess (1968) is about "the journey of a menopausal wife from Cardiff who loses her luggage en route to Yugoslavia and abandons her usual ways in favor of adventure and 'debauchery'". I wonder if any of you have already discovered Gallie's work.

Certainly another blogger—Peggy Ann of Peggy Ann's Post—got to Scottish novelist CATHERINE PONTON SLATER before I did. Earlier this year she reviewed Slater's Marget Pow, a trilogy of novels including Marget Pow in Foreign Parts (1912), Marget Pow Comes Home (1914), and Marget Pow Looks Back (1920), which were collected into one volume in 1925. You can read Peggy Ann's post about Slater here. The brilliant John Herrington was able to find a bit of information about Slater—born in Edinburgh in about 1853, maiden name Grant, married in 1892, and died in Renfrewshire in 1947—but details of her life remain sparse. She did publish two earlier novels—A Friendly Girl (1896) and A Goodly Child (1901)—but appears to have stopped writing (or at least publishing) after the final Marget Pow novel in 1920. Thanks, Peggy Ann, for finding and sharing this author! 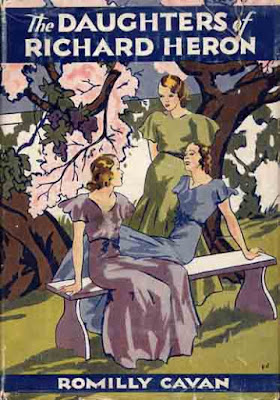 A regular reader and commenter on this blog, Lisa Perry, pointed me in the direction of ROMILLY CAVAN, who published six novels between 1934 and 1940 and then vanished from the publishing world, though she lived another 35 years. As I mentioned in a recent post, an online bookseller had suggested (correctly) that Cavan was a pseudonym, but speculated (incorrectly) that she was the daughter of E. F. Benson or his brother. In fact, John was able to trace her and find that her real name was Isabel Wilson, who married an Eric Hiscock in 1940 (which, along with World War II, provides probably the only clue we really need as to why she stopped publishing when she did). Incidentally, he also discovered that her birthday was the same as mine, July 13th.

Cavan's six novels sound as though they have potential. The first, Heron (1934, published in the U.S. as The Daughters of Richard Heron), is about a successful woman novelist and her daughters, though that's about the extent of my knowledge. Meanwhile, the American Mercury summed up her fourth novel, Characters in Order of Appearance (1938), as follows: "Marriage puts an end to the promising career of playwright Mark Brown: his wife's success as dress-designer overshadows his own, leaving him embittered and disconsolate. Very, very English." But it's her final novel that has me most intrigued. The Kirkus review of Beneath the Visiting Moon (1940) calls it:

It clearly needs to be added to my World War II Book List as well. 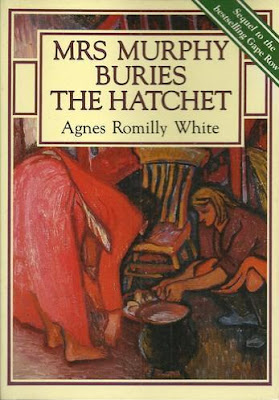 If Cavan's work can be described as "very, very English," from what I know of AGNES ROMILLY WHITE her two novels might be described as very, very Irish. Gape Row (1934) and Mrs. Murphy Buries the Hatchet (1936) were both reprinted by White Row publishers in Belfast in the late 1980s. An Abe Books seller (whom we will presume knows his/her business) says that White lived in Dundonald, where her father was a rector, from 1890 to 1913, and that she based her fiction on the life of that parish. The reprint publisher's blurb for Gape Row reads as follows:

Can Jinanna escape the poorhouse? Will young Johnny Darragh jilt Ann? Will Mary get saddled with the awful Andy John McCready? Or will Happy Bill, the wayside preacher, nip in first and win them all for God? A boisterous, rich, nostalgic book which immerses the reader in the cheerful chaos of everyday life in a small Irish village on the eve of the First World War.

Mrs. Murphy Buries the Hatchet is a sequel which takes place after the war has ended. The reprint publisher's blurb refers to its "strong plot, racy dialogue, and the author's vivid evocation of the County Down countryside." 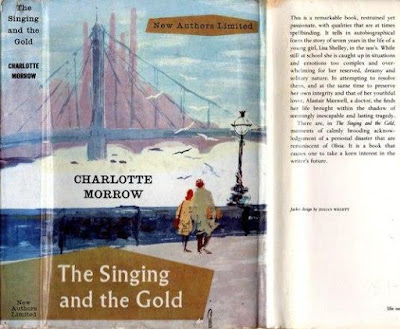 I have only vague knowledge of CHARLOTTE MORROW, who published several novels in the 1960s and 1970s (she just squeaks onto my list as her first novel appeared in 1960). But I do know that Barbara Pym apparently had a copy of Morrow's debut novel, The Singing and the Gold (1960), in her personal library. The front flap describes it as:

the story of seven years in the life of a young girl, Lisa Shelley, in the 1930's. While still at school she is caught up in situations and emotions too complex and overwhelming for her reserved, dreamy and solitary nature. In attempting to resolve them, and at the same time to preserve her own integrity and that of her youthful lover, Alastair Maxwell, a doctor, she finds her life brought within the shadow of seemingly inescapable and lasting tragedy.

Of Morrow's other work, I found information about only one, a 1975 children's title called The Marigold Cut, about "a boy who finds an old narrow boat hidden in an abandoned canal." 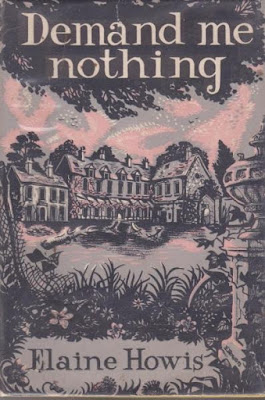 I don't have much more information about ELAINE HOWIS, whom John came across and forwarded to me. She published four novels and one story collection, all between 1956 and 1960, and reviews suggest the influence of Virginia Woolf, which—let's be frank—could be a good or a bad thing. A blurb from an Abe Books seller for her second novel, The Lily Pond (1957), reads:"Returning to Weymon Cove after previous light-hearted visits, Gemmi finds a strange difference. She determines to discover the reason for it, and disregarding all warnings she probes into the past." 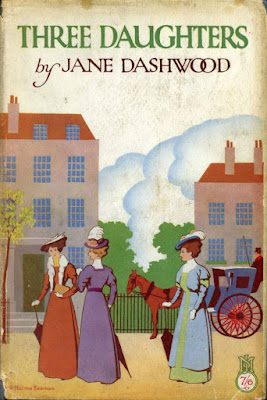 OLIVE HESELTINE's first book was called Conversation (1927), and was literally a guide to that very topic, with suggested strategies for communicating with one's fellow humans without boring them silly. Presumably, it was aimed at party hosts and hostesses. Perhaps Heseltine had been to one too many boring parties and decided to take matters into her own hands. But thereafter, she also published two novels, Three Daughters (1929) and The Month of May (1931), under the pseudonym Jane Dashwood. Based on contemporary blurbs and chauvinistic reviews, both could be poignant and entertaining or sentimental schlock—it's tough to say.

Three Daughters is about intergenerational conflict between a mother and her three daughters, apparently in the final years of the 19th century. Says the book's jacket:

The intimate, though conflicting, relations, of Lady Pomfret and her daughters are treated subjectively and with intimate sympathy. In the ordinary events of their daily life and in the secrets of their inner thoughts the different destinies of Lydia, Miranda, and Judy gradually emerge.

Meanwhile, according to the condescending Saturday Review critic in 1932, The Month of May is "the story of Mary Willoughby, who refuses to run away and marry the man she loves because she feels that her aging parents need her at home." Many readers will grit their teeth a bit as the critic continues:

As a heroine, Mary is young and lovable, if at times a bit too much inclined to the blue stocking, but her philosophy harks back to an older day. Once she has accepted her sacrifice she finds her sadness colored by a serenity and an inward sort of joy that give no hint that she will end her days beset with the grim complexes most modern writers assign to frustrated women.

Ah, yes, self-sacrifice is surely the key to womanly contentment…

And finally, I mentioned PRISCILLA JOHNSTON recently as well because her father was the designer of the lettering used on the London Tube for more than 60 years, until it was updated in the 1980s. She interests me because she adds not one but two new titles to my Grownup School Story List—her debut, The Narrow World (1930), and an apparent sequel, Green Girl (1931), which is about the love affair of a girl and one of the masters.

Perhaps the theme of a young girl's attraction to an older man was one that Johnston herself could relate to, because in 1946, the year before she published her final novel (reputed to be autobiographical, but I haven't been able to determine its subject matter more precisely), she married illustrator Leslie MacDonald Gill, a family friend who was 26 years her senior. Tragically, they had been married only three months when Gill was diagnosed with lung cancer, and he died the following year. There's a bio of Gill here, which mentions Johnston, and a more extensive discussion of their relationship and life together here, from which I stole, er, borrowed the photo of Johnston above. Johnston remarried in 1959. 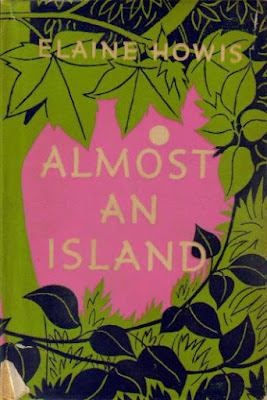 If time allowed, I would like to sample the work of all of these authors. Perhaps there's a lost masterpiece or two here? Has anyone previously come across any of these authors?
Posted by Furrowed Middlebrow at 12:02 PM