I've been exploring forgotten authors long enough now to know that contemporary reviews are not a particularly reliable indicator of how much I'll enjoy a particular book. Reviewers, poor dears, sometimes seem condemned to miss the point of the most entertaining and enjoyable fiction of their time. This is surely even more true in regard to middlebrow fiction by women, which has so often been judged by comparison to canonical male writers, despite the fact that their priorities and intents were quite different. I'd like to say this was particularly a weakness of male reviewers, but in all fairness women critics often seem to have used the same standards to make their judgments.

At any rate, I've certainly learned to take reviews in general with a grain of salt, and to try to read between the lines of even the negative reviews. Sometimes even the harshest critiques make me perversely determined to track down a book and sample it for myself.

On the other hand…

Occasionally a review succeeds in making a book unappetizing to me. I've been reading through quite a few reviews lately, as I diligently work on the next update to my Overwhelming List and seek out information on the new authors so I can share it with you lovely readers. A few of these have left me pretty convinced that I need not bother with the authors they're critiquing.

ROY DEVEREUX seems to have started her writing career flirting with the concept of the New Woman. She even wrote a fashion guide for aspiring New Women (one would like to think this was somewhat tongue-in-cheek, but I can't be sure). At any rate, by 1930 she seems to have positioned herself solidly in the realm of melodrama, judging from this review in The Mercury of her novel The Incredible Truth:

Incredible indeed! The author has invented a situation in which one of his [sic—apparently in this case one can't blame misogyny for the bad review] characters commits suicide and leaves the object of his passionate love £60,000 in order that she may be free to marry the man whom, loving, she has nursed back to health when he was on the verge of death. It might have been better had he died, for he proves not unnaturally suspicious of the source of this sudden wealth (his wife fears to disclose its almost incredible origin) and finally leaves her. The heroine, who is an artist unable hitherto to secure recognition of her genius, decides, in memory of the unselfish lover, who had made this almost incredible gesture, to devote her life to art. The story is incredible, but it is well written.

I love that, as idiotic as this plot sounds, the critic kindly allows that the book is well written…

Then there's CATHERINE VERSCHOYLE, who seems to have been a serious novelist judging from her themes. She's exactly the kind of writer I would usually want to give the benefit of the doubt, but I have to say that the Saturday Review's mention of her 1929 novel Willow and Cypress, despite its clear sexism, makes it hard for me to get excited about tracking the novel down:

To interest one's self in this book one must be a woman and a patient one. Bridget Wentworth is an ordinarily sensitive young creature whom the author would have us believe unusual; she passes through a dreary childhood and eventually marries a most preposterous young man. Her father and her mother die and the preposterous young man deserts her. In the midst of her grief she walks out into the woods one day, beholds the willow trees and the cypress, hears a thrush singing, and suddenly realizes the smallness of human woes. From then she goes forward—the implication is forever—in peace. This is indeed being snubbed for one's pains. What is best in the story is borrowed from convention. The rest is sheer artificiality.

Yikes. It's hard for me to imagine that I would find anything satisfying about this novel. But do you think I'm mistaken?

I confess I have little patience in general with novels whose characters either lead lives of unrelenting despair or of an utterly humorous and superficial sense of joy and love and kindness toward all. (Perhaps I could simplify this statement by saying that I have little patience with humorless novels, period.) And here's another one that surely falls into that category (unless the review is totally, delusionally off-base): 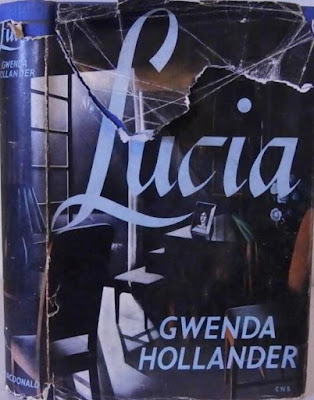 GWENDA HOLLANDER published only three novels, and information about them is sparse, so perhaps judging her on the basis on one review is unfair. But goodness gracious, that review—of her second novel, The Stubborn Field (1952)—is a doozy! Here's how The Tablet put it:

The Stubborn Field is first-person autobiographical about another blighted spirit, a young man who persists in messing about with clay and wishing to be a sculptor. The experienced novel-reader will readily guess that he is thwarted and mocked by his practical associates, save for one understanding teacher; that he seals his doom by marrying a calculating slut who pins him down to an uncongenial job: and that finally the hands which should have called living forms out of the clay are employed to throttle the life out of the slut. Another warning against having anything to do with Art in the Midlands.

I do love that final line though. 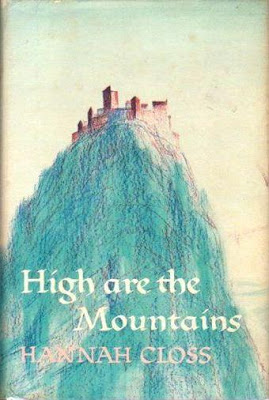 And finally, I think I'm more of a fan of the Kirkus reviewer of HANNAH CLOSS's 1940 historical melodrama Tristan than I am ever likely to be of Closs herself. Writing about a 1967 reprint of the novel (hey, it actually got reprinted!], the reviewer says:

The late Hannah Closs wrote a middle-register medieval trilogy dealing with the Albigensian Crusade. This is a retelling of the Tristan story, which certainly needs no retelling here since it is the conventional one reconstructed (in her words) with "imaginative emotion." The former may be questioned; the latter is largely of an exclamatory nature. As for the characters, none are ever processed beyond the unidimensional heroic stance of legend. Probably the appeal of any variant version is the way in which it is written: Miss Closs indulges in a very poetic prose and dangles jewel-toned images and adjectives (fulgent, pellucid, et al). "Even the sea slept, lulled in caves and crannies washed black and oozy with the waves beating, or, lifting a drowsy curl of foam, encircled some fretted pinnacle with dreaming blue." Or purple?

An odd little footnote to this review: the same publication (though presumably a different reviewer) discussed Closs's 1945 novel High Are the Mountains, the first volume of her Tarn Trilogy, in the following terms:

This is an exceptional historical novel. Set in southern France in the 13th century, this evocation of the Middle Ages is rich in scene and mood, impressive in command of language, highly complex in characterization, delicate in refinement of motivation. 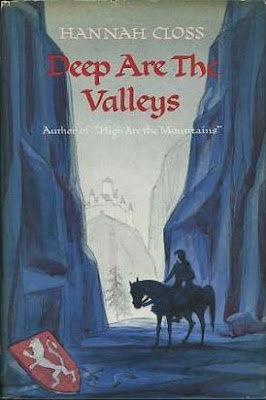 Either Closs had dramatically improved her style in the intervening five years, or literary ability is entirely in the eye of the reader!

So what do you think? Are any of you feeling inspired to frantically search the internet for these authors, convinced that reading their work will greatly enhance your lives?
Posted by Furrowed Middlebrow at 11:24 AM