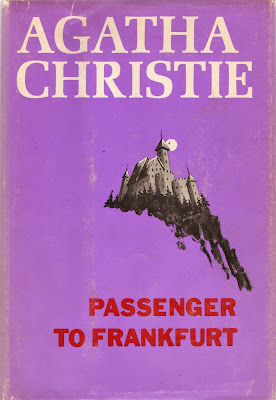 I really need to come up with more excuses for blogging about Agatha Christie. She is anything but "lesser-known," but it's a fun change of pace to write about an author that many of you have actually read (and some of you probably know more about than I do) rather than the ones I usually write about, which most people have never heard of. It's also fun because, officially, as of a few days ago, I have now read every single novel by dear Dame Agatha, making her probably my most-read author. I started reading her when I was about 10 or 11 and have been reading and re-reading ever since.

So why, you might ask, has it taken me so long to get through all of her novels? Apart from the fact that there are 60+ of them, of course, but that's not the real reason. I had read all but two or three of them at least 10 years ago. The real reason is twofold. First, for several years I delayed reading Hercule Poirot's Christmas (aka Murder for Christmas, aka A Holiday for Murder) because it was my last remaining Poirot and I couldn't bear the thought of being absolutely positively finished with them.


And then there was Passenger to Frankfurt. Ugh. (And by the way, the other reason it's fun to write about Dame Agatha is that I can be as snarky and harsh as I need to be without ever losing sight of the fact that she's permanently a part of who I am and one of my most loved authors.)


I've attempted to read Passenger to Frankfurt several times over the years and have never been able to finish. But last week, I picked up my snazzy new hardcover copy from the book sale, with its reader-friendly type and nice thick high-quality paper, and I made one final attempt. This time I persevered, and I'm happy to report that I finally finished it. True, my happiness stems mainly from the fact that I shall never again feel obligated to pick it up again for any reason other than to admire its appearance. But it's happiness nevertheless.

Because I have to say, in my own opinion, this is truly not only the worst of Dame Agatha's novels; it's probably one of the worst novels ever published. It's the tale of a global conspiracy—of some sort—and the people who are trying to combat it—in some way—and save it from the bad guys—sort of. Oh, and by the way, apropos of nothing, it emerges that Hitler snuck out of Germany at the end of the war and has been living in South America. It's unclear what connection, if any, this has to do with the main plot here (whatever that might be), but hey, Hitler is scary, is he not? So why not toss him in?


There's a silly but funny line from Neil Simon's movie The Cheap Detective, a parody of classic movies like Casablanca and The Maltese Falcon. In one scene, the Ingrid Bergman-ish leading lady is pontificating at length about freedom and various other noble sentiments, and when she walks away, Peter Falk's character says, "There, gentlemen, goes a brave, beautiful, and extremely boring woman." This is relevant only because it occurs to me to say that the conspiracy Christie portrays in Passenger to Frankfurt is terrifying, diabolical, and extremely silly. There are people, and they are organizing, and causing unrest, and—basically—thereby causing distress to elderly British people reading the newspaper every day, who find it all a bit bewildering and wonder what the world is coming to.


Here's one of the clearer explanations of what's going on:

"Youth is what you might call the spearhead of it all. But that's not really what's so worrying. They—whoever they are—work through youth. Youth in every country. Youth urged on. Youth chanting slogans—slogans that sound exciting, though they don't always know what they mean. So easy to start a revolution. That's natural to youth. All youth has always rebelled. You rebel, you pull down, you want  the world to be different from what it is. But you're blind, too. There are bandages over the eyes of youth. They can't see where things are taking them. What's going to come next? What's in front of them? And who it is behind them, urging them on? That's what's frightening about it. You know, someone holding out the carrot to get the donkey to come along and at the same time there is someone behind the donkey urging it on with a stick."


There. Now we know where we stand, don't we? What? You're still not clear on the plot? Well, perhaps this will help:


"It's quite simple," said Mr. Robinson. "There are big movements afoot. There has to be money behind them. We've got to find out where that money's coming from. Who's operating with it? Where do they get it from? Where are they sending it to? Why? It's quite true what James says: I know a lot about money! As much as any man alive knows today. Then there are what you might call trends. It's a word we use a good deal nowadays! Trends or tendencies—there are innumerable words one uses. They mean not quite the same thing, but they're in relationship with each other. A tendency, shall we say, to rebellion shows up. Look back through history. You'll find it coming again and again, repeating itself like a periodic table, repeating a pattern. A desire for rebellion. A feeling for rebellion, the means of rebellion, the form the rebellion takes. It's not a thing particular to any particular country. If it arises in one country, it will arise in other countries in less or more degrees.


Um. Sure. Quite simple.


According to the novel's Wikipedia page, Robert Barnard, a well-known mystery writer in his own right, wrote of Passenger:


The last of the thrillers, and one that slides from the unlikely to the inconceivable and finally lands up in incomprehensible muddle. Prizes should be offered to readers who can explain the ending. Concerns the youth uproar of the 'sixties, drugs, a new Aryan superman and so on, subjects of which Christie's grasp was, to say the least, uncertain (she seems to have the oddest idea of what the term 'Third World' means, for example). Collins insisted she subtitle the book 'An Extravaganza.' One can think of other descriptions."


(The "third world" thing is rather funny. Christie seems to have believed it was something akin to the Third Reich.)

Inexplicably, though, Maurice Richardson in the Observer said that although Passenger wasn't Christie's best work it was "very far from her worst." Seriously? Even allowing for the fact that different readers seek different things from a mystery or thriller, I defy anyone to tell me which Christie novels could possibly be worse.


Certainly, there are daft plots in some of her other books. For example, the method of killing in Death in the Clouds would have worked (without being seen, at least) in about 1 out of 2,000 attempts. And the one in Murder in Mesopotamia isn't even as viable as that. Then, there are one or two mysteries dealing with teenage delinquency that I personally find a bit tedious. And there are a couple that, like Passenger, feature large criminal organizations, and even in earlier years it's clear that Christie didn't possess a clear understanding of how such an organization might logically work. But none of these approach, to my mind, the level of repetitive meaninglessness of Passenger to Frankfurt.


That said, however, I momentarily felt less snarky after I also learned from Wikipedia that there have apparently been scientific studies of the vocabulary and repetition in Christie's late novels as compared to her earlier work, which have concluded that Christie was likely suffering from Alzheimer's or some variant form of disability. Which seems a viable explanation (I recall being bewildered by Iris Murdoch's final novel even before the announcement was made about her Alzheimer's) and also makes me feel sad for the wonderful Dame Agatha and her family in those final years.


What's odd, however, is that Passenger was not, in fact, the last novel Christie completed. Two more followed: Elephants Can Remember, the last Poirot—along with a final guest appearance from Ariadne Oliver—that Christie wrote (Curtain is the last case, but was written much earlier), and Postern of Fate, the final Tommy & Tuppence novel. Now, I'm willing to bet that neither of these are on very many Christie readers' Top 10 lists, but I would place both well up the list from Passenger.


They are both similarly meandering and repetitive (perhaps not unlike this post), but in Postern of Fate particularly (it's been a while since I read Elephants, so I don't recall it so well), this aimless rambling actually fits rather nicely the story being told. I might even go so far as to claim that Postern, which involves T&T stumbling across a long-forgotten crime as a result of Tuppence's absent-minded perusals of old books, has the effect (if undoubtedly not the intent) of a rather humorous postmodern meditation on old age and decreasing faculties. T&T have repetitive conversations, wander aimlessly about the house and village, and even, at one rather embarrassing point, mention their adopted daughter in an explanatory way—as in, Tuppence says to Tommy, "So-and-so, our adopted daughter, wrote in her letter…" Would he be likely to need that sort of clarification, one wonders? Had he forgotten they adopted a child? Well, who knows?

But even so, if I were looking for a purely cozy, comforting, and enjoyable Christie to read on a cold rainy day, and I didn't care much about having a clever puzzle to disentangle, Postern of Fate might well be my choice. I've read it two or three times, and even thinking of it is making me want to read it again (an impulse that will surely never arise in regard to Passenger). T&T in later years are just so charming and loving and happy together that they are irresistible, doddering and dithering as they might be.

Which suggests that my problem with Passenger to Frankfurt is not so much to be explained by the fact that Christie might have been in poor health when she was writing it, as it is by the fact that she was attempting to write a spy novel that she was completely unequipped to write. It wasn't Alzheimer's or general old age that made Passenger a train wreck. It was bad authorial judgment.

Ahhhh, snarkiness is fun. And just for some icing on the cake, one more inspiringly brilliant quotation from Passenger:


"I could reply. I could tell you things, but would they mean anything?"

In the context of this novel, it's difficult to imagine that they would.
Posted by Furrowed Middlebrow at 7:13 AM