Some news completely unrelated to books

Although it has nothing whatsoever to do with British women writers or the middlebrow (apart from the fact that it involves a thoroughly unrepentent middlebrow—i.e. me), I have to do a brief post to share with you all a special event that took place last week. We didn't make a lot of fuss about it, invited only four friends who live in the city, and we both worked at our respective jobs for the morning before taking the afternoon off, but last Monday Andy and I headed to beautiful San Francisco City Hall and tied the knot. 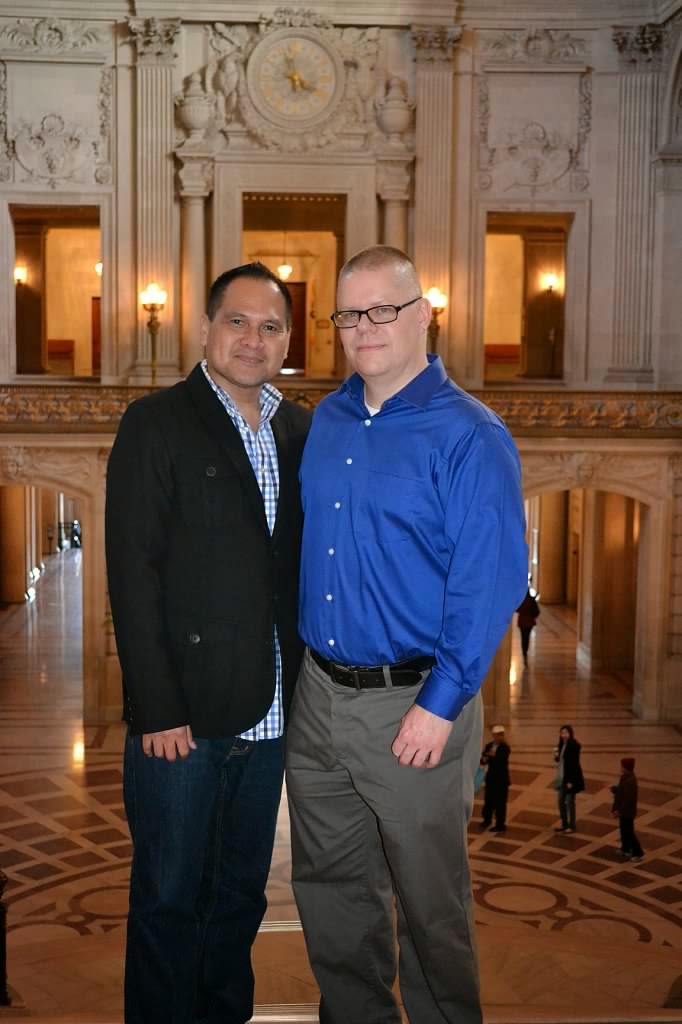 As just a bit of background, our relationship has developed right alongside the heating-up of the same-sex marriage issue in the United States. Only a few months after we met in 2008, Gavin Newsom, then mayor of SF, brought things to a head by deciding that there was nothing in the California state constitution to prohibit same-sex marriage and ordering clerks in San Francisco to begin issuing licenses and performing ceremonies. It was an exciting time, but having just met, we weren't quite ready to take the plunge yet.

Later that year was the big election which saw Barack Obama become president but also saw a proposition passed in California to outlaw same-sex marriage. This left several thousand couples who had married in the intervening months in a kind of limbo—technically married but uncertain about whether their marriages would be invalidated at some point in the future. This limbo continued between 2008 and 2013 while the courts considered the validity of the proposition, and in June of 2013 the proposition was finally struck down and same-sex marriages resumed. Around the same time, President Obama announced that the federal government would recognize all same-sex marriages that were legal in the states where the couples lived, with all the federal tax, insurance, and Social Security benefits that implied.

Allowing for the fact that Andy and I are the kind of people who say, "You know, we really should [insert activity] someday" for at least a few months before we get around to actually doing anything about it, the fact that it only took us a year and a half after the option became available again until we actually made things legal is not really so bad.

We didn't make a huge fuss about it all (we only let our families know when we posted about it on Facebook afterward), as we felt we were really just finalizing what we both already knew and felt. But it's hard not to feel the drama of a ceremony at City Hall when it's so lovely, and even a five-minute exchange of vows holds a certain inherent power and meaning that we both felt. This might be even more true because it's something that for most of our lives we had assumed we would never have the option of doing. 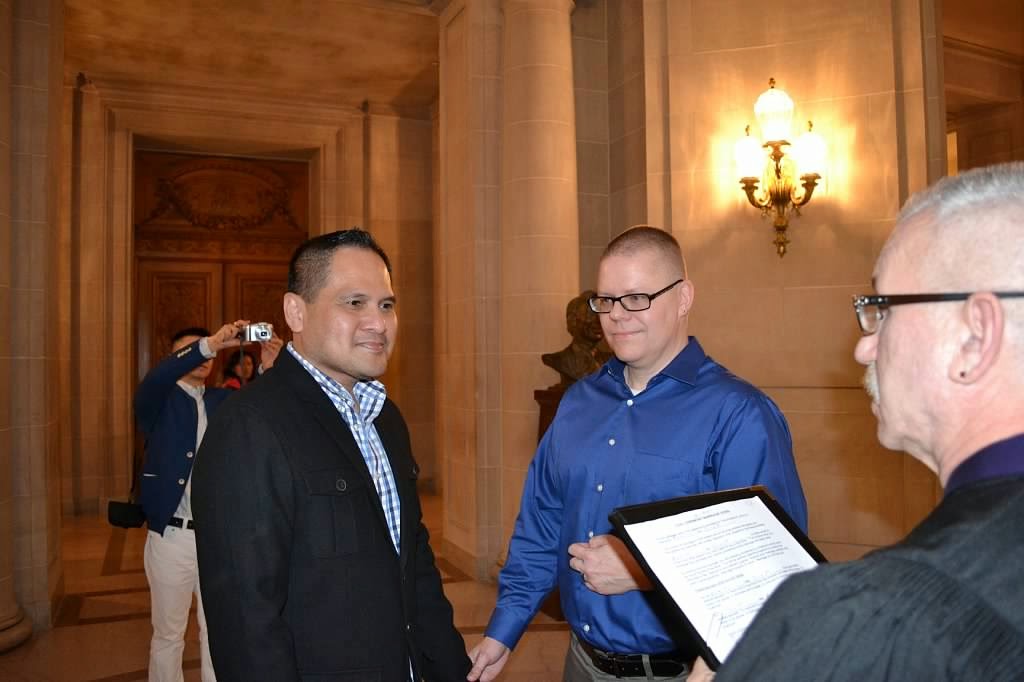 Only a few days after our marriage, the news came that the U.S. Supreme Court will, in a few months, hear and (hopefully) decide the same-sex marriage issue once and for all for the entire U.S. So history will continue to unfold in the next few months, and it's exciting to feel that Andy and I have been a small part of it all.

Two odd details about our marriage at City Hall:

Since the City Hall building is quite lovely and historic (sadly, it was also where trailblazing gay activist Harvey Milk was assassinated, along with then-mayor George Moscone, in 1978), there are always tourists snapping pics. I hadn't quite made the connection that this meant there would be tourists snapping pics of our wedding, but that was indeed the case, including a young Asian woman who seemed to want to capture a real live San Francisco gay wedding from every possible angle to show her friends back home! Oh, well, it's kind of fun to be a tourist attraction, I suppose, for however short a time.

Then, after the ceremony was over, we were heading upstairs to take more pictures among the big dramatic arches and windows, and waiting outside the elevator was a familiar figure—another former SF mayor, Willie Brown, who, when approached out of the blue by my friend Katherine (who would undoubtedly boldly approach the Pope or the President or just about anyone else if it meant getting a good picture), very graciously agreed to pose for a photo with us. 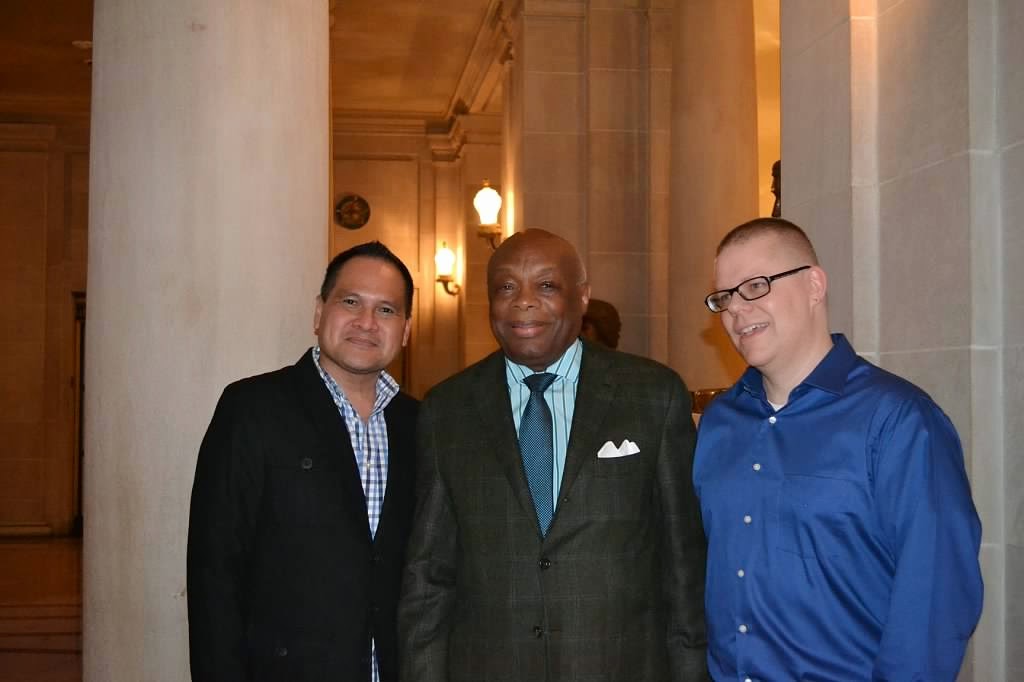 So, that was my big news for the week, which I couldn't resist sharing with you all. Back to posting about books in a few days!
Posted by Furrowed Middlebrow at 6:16 AM