The kindness of strangers (and the shape of things to come)

I have had many (too many) plans in the past couple of months regarding all the things I would get done here before our trip to Italy puts this blog on hiatus for a few weeks.

First and foremost, I had set the goal of finishing a massive new update to my Overwhelming List, which contains well over 300 (!!) new writers and which has threatened to finish me off recently, rather than the other way around. It does have a way of expanding and growing as I work on it. I have persevered, however, and am now relatively certain I will survive it and get it polished off.  But alas, it will not happen until we're back from the trip.

I also had high hopes that I would finish the next of my world famous and highly anticipated (okay, perhaps that's overdoing it) genre lists, following in the footsteps of my Mystery List and my Not-Quite-So-Overwhelming List. I'm particularly excited about this one, but alas, although it too is fairly close to completion, it's not close enough, so it will have to wait for November as well.

(Truth be told, had I focused all of my efforts on one or the other of these projects in the past few weeks, instead of bouncing between them like an ADD-afflicted chimpanzee, I would likely have gotten one of them finished and happily posted. But that would have been much less fun for me, who dearly love bouncing from one project to another.)

But there is one post I've been meaning to do that I absolutely have to do before jetting off to greener pastures (or greener vineyards, perhaps?):

One of my favorite things about blogging has been hearing from all sorts of people out of the blue, who have encountered my blog and have something to share with me. I've already mentioned many of these kind folks in previous posts, but I've recently heard from several more and have benefitted from their generosity, so I have to give some appropriate acknowledgement.

First, a few weeks ago I heard from Carolyn Croll, an artist, illustrator, and author living in Philadelphia (check out her storefront here for some of the lovely jewelry she designs). Carolyn was trying to find information about March Cost and—not too surprisingly—had little luck apart from my brief discussion of one of Cost's novels a while back. But the real reason Carolyn was looking for information was that she had a beautiful signed and framed photograph of Cost, which had been given to Carolyn's good friend, John Francis Marion, a Philadelphia writer and historian (see his obit here and some of his books here), by none other than Cost herself. And as it happened, Carolyn was looking for a good home for the photograph.

Ahem. Needless to say, I proved quite obliging about helping her get the photo adopted... 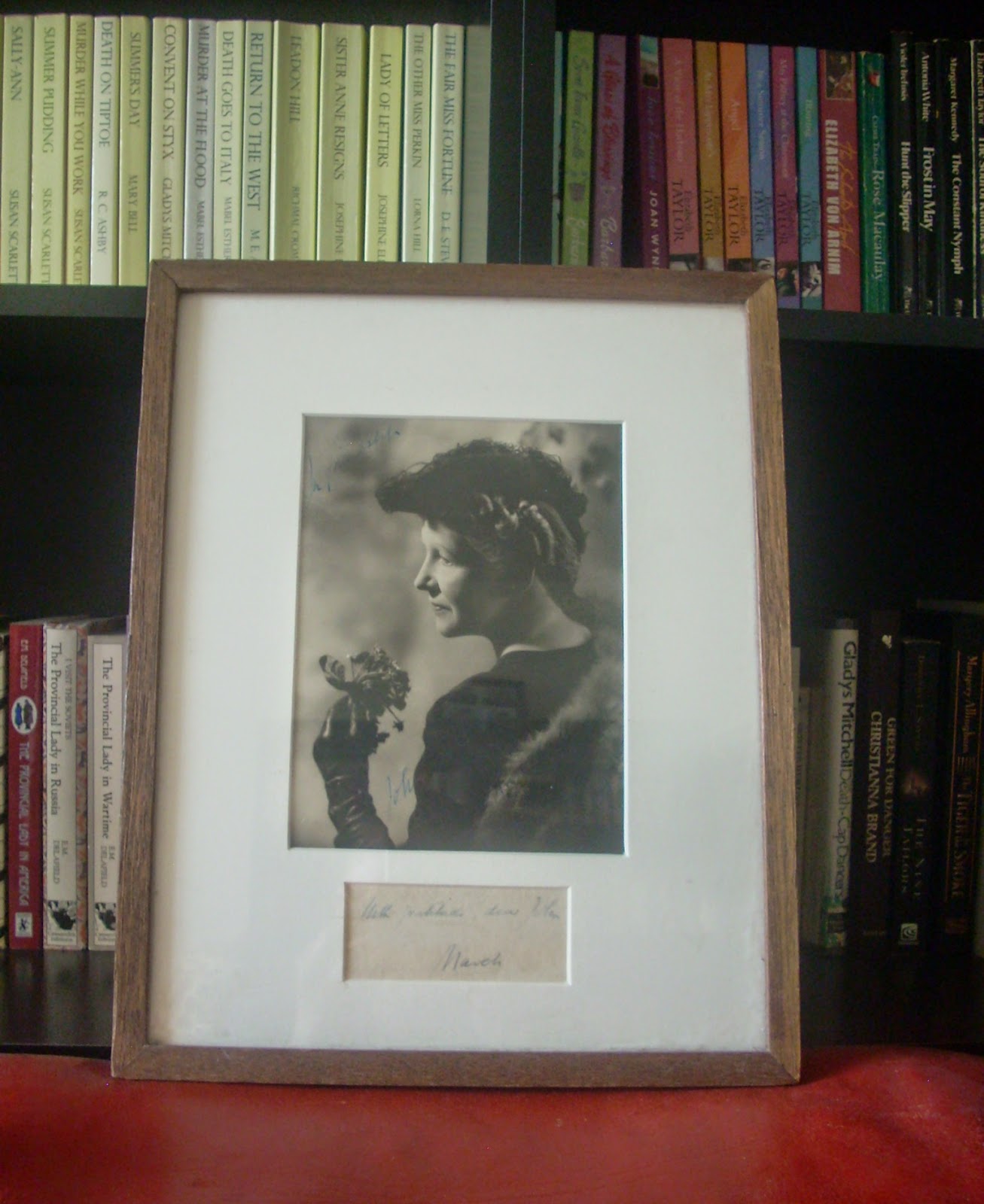 And as you can see, the photo is the same as that used on the back cover of The Hour Awaits. Thank you again for tracking me down and sharing this treasure with me, Carolyn! 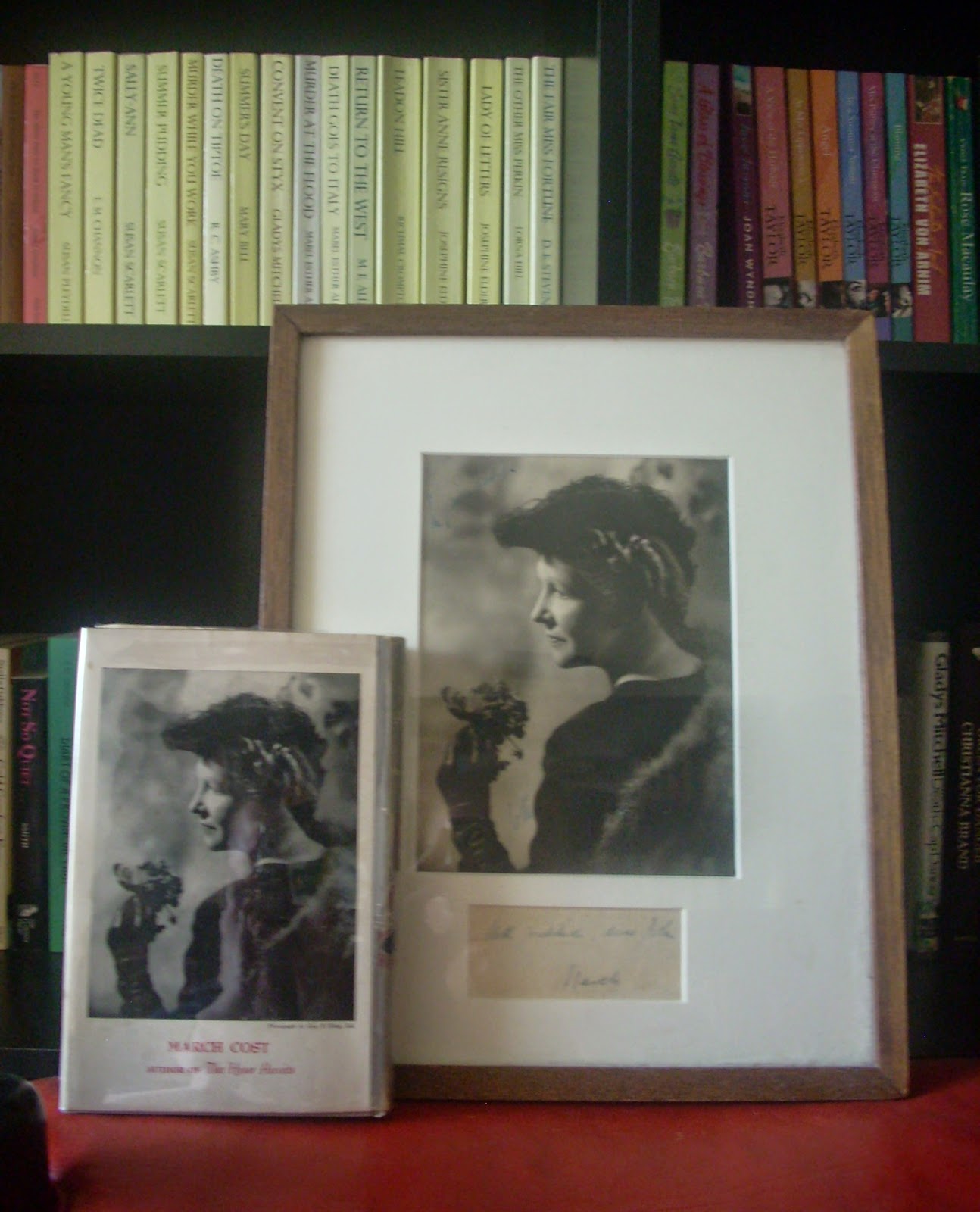 Not long after hearing from Carolyn, I posted (finally) my new and updated Hopeless Wish List, and talked about how, as my skills in tracking down obscure titles have improved, the list of titles I couldn't locate had inevitably grown more and more hopeless. I tried to end the post with an optimism I didn't really feel, by saying I hoped that in another year or so I'd be able to update the list and report that a few of the titles hadn't proved hopeless after all.

Little did I know that within a few days I would get an email from Grant Hurlock, a fellow Californian with an interest in World War II fiction almost as passionate as my own. And that Grant would casually mention that he had copies of not one, not two, not three or four, but five of my most coveted "home front" novels, and that he was willing to share them with me. The joys of blogging, indeed!

Now, I've decided to be a bit coy about which titles exactly they are, because I want you to have the surprise of reading about these books one by one as I review them. I know, it's irritating of me, particularly since I am sometimes so far behind on reviewing books I've read that we could see a couple of Christmases wax and wane before I write about all five, but in return for your irritation and your patience I hope to come up with some really interesting reviews for you, and to share information about some titles that haven't been discussed much elsewhere because, well, the books barely exist anymore outside of the British Library. I've already finished reading one of them, which had seemed perhaps like the most hopeless of all, and am just busting to talk about it, but, alas, it too will have to wait until our return from Italy...

So, an enormous thank you to Grant—and just more proof that things are never as hopeless as one might think.

And finally, I always love when I can flesh out information on an author about whom little is known. Late last year, I posted an update to my Overwhelming List that included Dorothy M. Nevill, author of a single book, Mrs Moore’s Mishaps and Other Humorous Short Stories (1933). I knew next to nothing about her, though I was (and am) intrigued by the book itself.

Just a few days ago, however, I received an email from David Nevill Alcock, Dorothy M. Nevill's son, who not only provided me with valuable information about his mother, but also sent me a press clipping about the book, which includes a charming picture of her at the time the book was published, and an additional photograph of his mother in later years. I'll be revising and expanding Nevill's entry on my Overwhelming List when I finalize the next update (soon! soon!), but in the meantime I can't resist a little mini-bio from what David was kind enough to tell me: 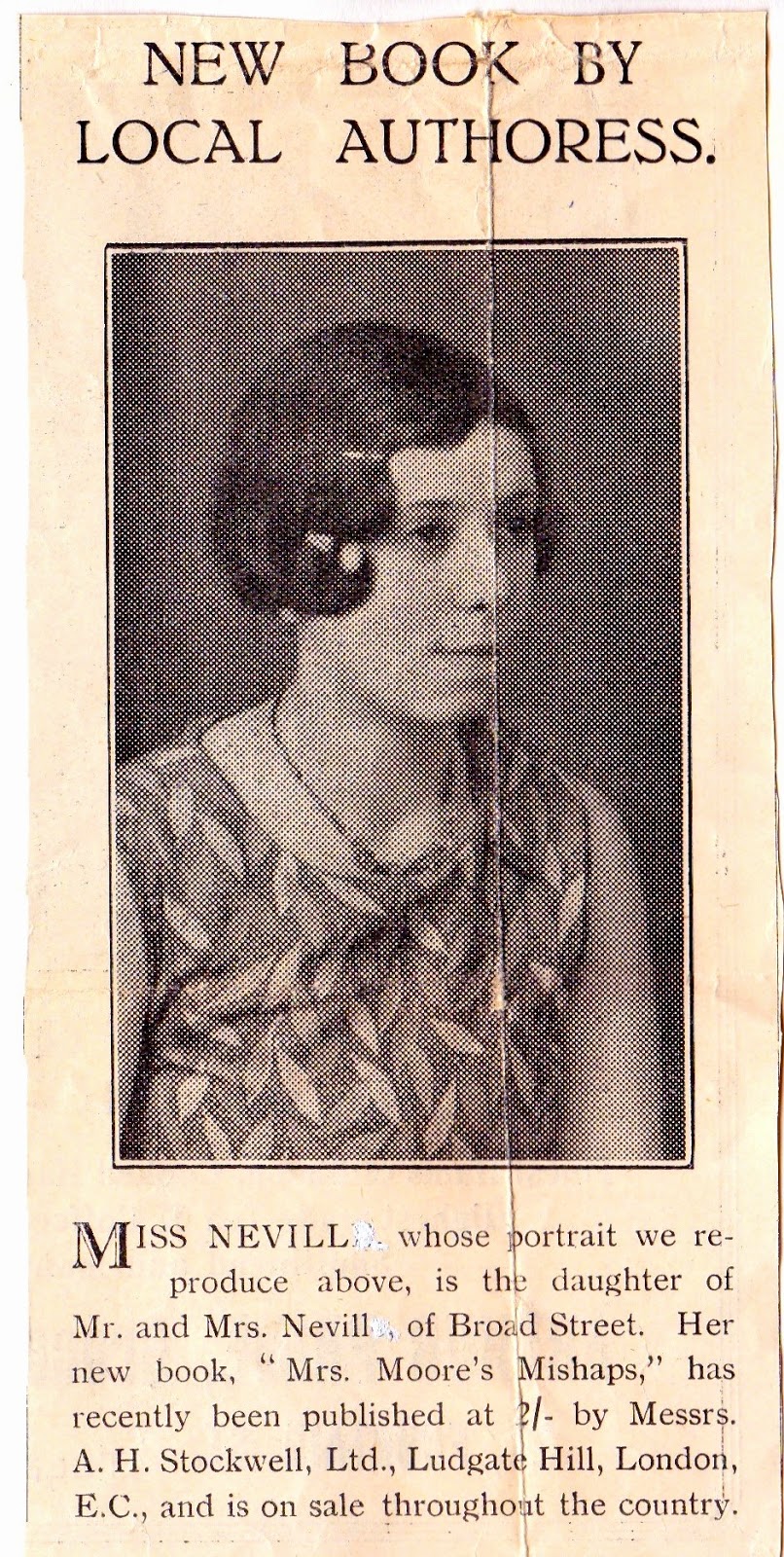 Dorothy Mary Nevill (1912-1990) was born in a small market town called Leek in Staffordshire, England, and she lived there for her entire life. Her married name was Alcock, and she gave David the middle name Nevill to carry on her own family name, since she was an only child. Her one book was published when she was only 21, and was a collection of short pieces which she had originally published in the local Leek Post and Times. She never published another book, but went on to a career in psychiatric nursing. 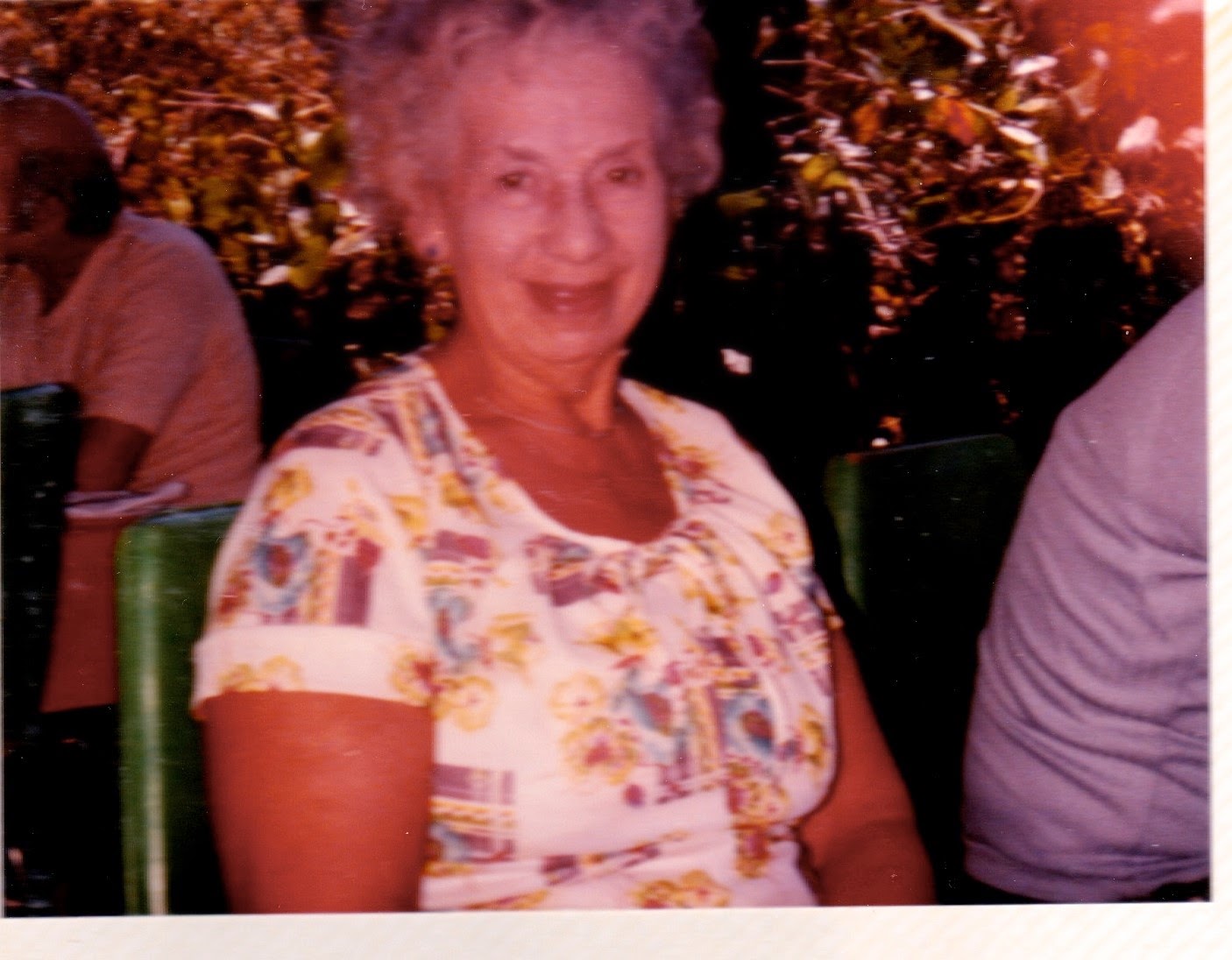 I would love to be able to provide this kind of information (and such wonderful photos) for a whole slew of other writers on my list for whom all traces seem to have been lost. But in the meantime, thanks again to David for allowing me this lovely insight into his mother's life and work.

By the way (yes, this is still one more promise of things to come), I also recently emailed with a descendent of three of the women on my list—three generations of women, no less (hint, hint)—but that will the topic of its own future post. There's that irritating coyness again.

Clearly, I have my work cut out for me when I return.  But for now, I'm afraid the blog will be a bit stagnant for the next few weeks.  I'll expect to get back to work on it in early November.  Until then, I'll be relying on the kindness of strangers in Italy.

Posted by Furrowed Middlebrow at 8:00 PM