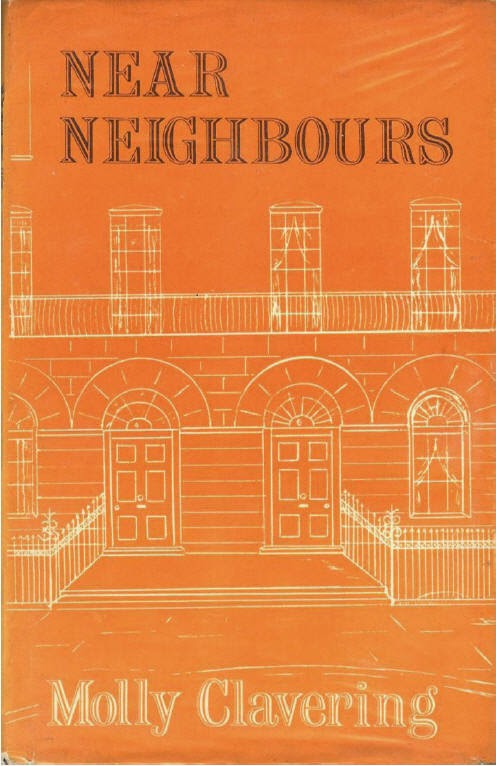 I'm completely embarrassed by how long it's taken me to get around to discussing this book.  I actually read it and made notes on it at least three months ago, but somehow the process came to a screeching halt after that.  I plead a new job, trip planning, and general bewilderment as my excuses.

It's even worse because I owe a huge thanks to Michael Stewart, who happens to be a cousin of Molly Clavering's, and who not only was the source of most of the information I was able to share in my "in detail" post on Clavering last year, but also made it possible for me to read this novel at all, which is nonexistent in libraries (in the U.S., at least, and pretty much so, apparently, in the U.K. as well) and vanishingly rare or prohibitively expensive to purchase.

After I had written about Clavering's best-known (and by far most readily available) novel Mrs. Lorimer's Family (1953, aka Mrs. Lorimer's Quiet Summer), several lucky readers who possessed copies of other Claverings suggested that I would also particularly enjoy Near Neighbours, published three years later and, they assured me, one of the most charming and entertaining of her works.  So I was thrilled to have a chance to finally read it, and I should certainly have gotten around to writing it about before now.  But, better late than never, right?

Among the other information that Michael provided was the probable area in Edinburgh upon which Clavering based her fictional "Kirkaldy Crescent" and its surrounding streets.  Clavering evokes the neighborhood wonderfully in the opening pages of the novel:

As the nineteenth century progressed, town planning degenerated to a race to build enough houses for the ever‐increasing population. Behind Kirkaldy Crescent, especially on the north or original side, there sprang up street after street of high ugly dwellings, which backed on to their high‐walled strips of garden. Now the “other side“, saved by the stream from sharing this fate, could speak pityingly of “those dreadful slums” opposite, so close to their superior neighbours. Fortunately for them, none could look into the future. In their worst nightmares they never dreamed of the days to come, when almost every house on both sides of the Crescent would be convened into flats, and their roomy, beetle‐haunted basements, once occupied by kitchen premises, became the abode of separate tenants, taxi‐drivers who parked their cabs beside the garden railings in the centre of the oval, or bus conductors, and their noisy families.

The changes wrought by two world wars brought this to pass, and of the whole stately Crescent only two houses remained unaltered. These were Number Six and its next‐door neighbour Number Four, at the lower end of what the owners of Number Four still called “the good side of the Crescent”.

Thus is the stage set, and I was pretty sure that with such a stage I couldn't help but enjoy the show. 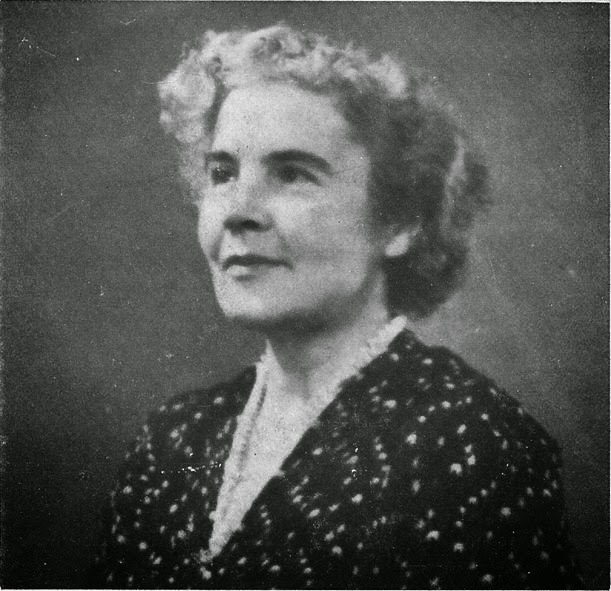 The novel centers around 68-year-old Dorothea Balfour, who has led the rather bleak life of a brow-beatee, first at the hands of her father and then, after his death, at the hands of her domestic dominatrix of a sister, Belle—who, though briefly married years before, soon returned home to stay, surly and thoroughly miserable-making.  When the story begins, Belle has been dead only a few weeks, having collapsed over dinner and died of a stroke.  Her death is recent enough that Dorothea is still half-cowering, even alone in Number Four with the kindly family housekeeper, Edna.  She is only now beginning to sense her new freedom:

[S]he realized, with a guilty pang, that she found her recent meals, eaten in solitude with a book propped against the waterjug, infinitely preferable to those partaken of when Belle had sat munching at the head of the table, and nothing had broken the silence except the sound of chewing, or an occasional diatribe from Belle on Edna’s general unsatisfactoriness. It was dreadfully sad to remember one’s sister only as a fault‐finder, and it made Dorothea feel wicked, yet all her memories of Belle were like that.

She now takes to surrepticiously observing the doings of the widowed Mrs. Lenox and her children next door in Number Six.  Belle had always forbidden contact with the neighbours, whom she considered low class, and the Lenox children's games humorously reveal their awareness of the truth of Belle and Dorothea's relationship:

Number Four was the giant’s castle, the witch’s cave, the dragon’s lair, and Mrs. Milner, Miss Balfour’s sister, was in each case the giant, the witch, or the dragon, Miss Balfour herself the victim to be rescued from her wicked clutches.

In the end, of course, these games do, to some extent, become reality.  The children—comprised of one son, Murray, and four daughters, Willow, Hazel, Rowan, and Holly—eventually notice the benign gaze looking down on them, and Rowan boldly decides to pay Miss Balfour a call for the first time.  From there, of course, Dorothea's life really begins to open up, and Clavering is skillful at showing this gradual process.

Soon after Rowan's visit, for example, she decides she will ask her housekeeper to call her Miss Dorothea rather than the far less dignified Miss Dottie to which she's become accustomed.  Then she thinks of redecorating the house, which is completely dominated by her father's and Belle's taste.  She gets involved with the family's mild difficulties and dramas, which include Rowan's troubled relationship with her highly irritating partner on a dance team, Willow's loneliness in the absence of her soldier husband, the overcrowdedness of the Lenox household, and Rowan's concern for the wife and children of an irresponsible painter who has abandoned them all because he feels that family life is bad for his art.  And Miss Dorothea has some dramas herself, from her spontaneous rescue of an endangered child to her encounter with Belle's long-lost husband, Montague, from whom she learns some surprising secrets about Belle.  Poor Montague, who's a bit down on his luck, winds up staying with Miss Dorothea indefinitely, and her thoughts about him are rather hilarious (and perhaps intentionally play off the stereotype of spinsters and their cats?):

He looked pleased enough to purr, thought Miss Balfour, looking at him with mild affection, and with his round face and neat features he was not unlike a cat. A large contented cosy cat.

Miss Balfour was not a real cat‐lover, but she had sometimes thought that a nice strokable cat would have been agreeable to have about the house. Belle, however, would not hear of it, even on the grounds that the cat would catch mice in the wine cellar.

Of course, there was nothing to prevent Miss Balfour from having a cat now, only she no longer seemed to want one. She had Montagu instead.

Miss Dorothea's calm, intelligent presence and eagerness to help works wonders on the Lenoxes' woes, and it will surprise no one that the woes are systematically and satisfyingly resolved.  She also finds her own problems gradually dissipating in the process.  It's all completely charming and readable, and it's a perfect way to spend a relaxing rainy day or a day in bed with a bad cold.  In fact, after I had written about Clavering previously, some of the members of the D. E. Stevenson discussion list discussed how perfect Clavering's work—and this novel, in particular—might be for Greyladies.  As light and carefree as the Susan Scarlett (i.e. Noel Streatfeild) novels they've had such success with, and as cheerful and life-affirming as the early D. E. Stevenson work they've published in the last few years, Near Neighbours certainly has "possibly Greyladies" written all over it.

Posted by Furrowed Middlebrow at 6:36 AM

Labels: 1950s, In the Spinsterhood, Molly Clavering, The Happy Homemaker (or Not)