As the Friends of the San Francisco Public Library Giant Book Sale is beginning tonight, with Andy and I (of course) in attendance for the members' preview, it seemed like good timing to finally make this brief digression onto a fairly obscure American author.

One of my all-time favorite book sale finds—and one of the most unlikely—was by a writer I had never heard of (an American, no less) and to whom, under ordinary circumstances, I would probably never have given a second glance.  Jessamyn West was, as I later discovered, best known for her 1945 debut novel, The Friendly Persuasion, about Quakers wrestling with their pacifism during the American Civil War.  That books sounds quite interesting too and I've always meant to circle back around to it, but that wasn't the book I found myself drawn to. 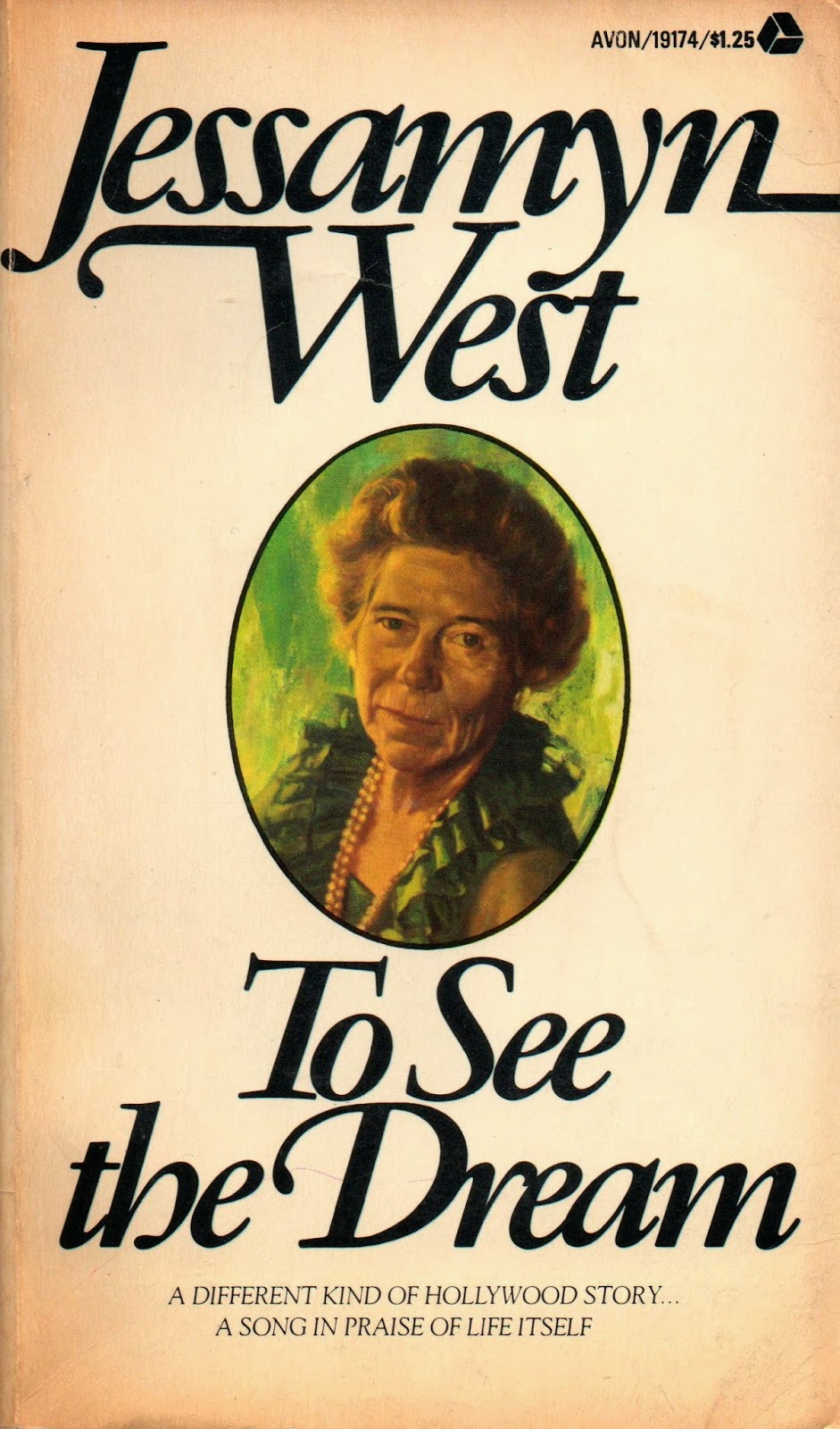 The book I would ordinarily never have picked up, but for some almost mystical reason (or perhaps merely an obsessive compulsive one) couldn't resist on this occasion, was To See the Dream (1957), West's memoir of her time in Hollywood during the making of the film version of The Friendly Persuasion.  Although she did get to hang out with the likes of Gary Cooper, her shoulder-rubbing with fame was not the book's main attraction.  Rather, it was West's wonderful, thoughtful, charming, and always humane and compassionate personality and mind that made reading the book such a moving experience.  I came to feel that she was a delightful friend in whose company I would cheerfully have watched grass grow or paint dry, so long as she was willing to share her thoughts about those phenomena in the process.

I recall that there were many wonderful passages in the book, all of them worth sharing, but at the time I was reading the book I was blissfully unaware of my future as a blogger, and so I kept no significant notes.  Despite that, however, and despite the fact that my memory of the specifics of most books is about as agile as that of a severely concussed fruit fly, one particular passage has stuck in my mind and resurfaced every time I've even contemplated making a trip.  It's a lovely meditation on bookaholism and on the compulsion to carry books with one even when there's no time for reading.  Some of you might even be fellow bookaholics—either recovering or utterly irredeemable—but if you're not, this passage will give you an idea of how the addiction works…  Ah, how I relate to it!

I'm as drawn toward a bookstore as an alcoholic is toward a bar—only my case is really more neurotic. The alcoholic doesn't, I think, with a room full of bottles, feel the need of going off to search for the one perfect bottle which has, so far, eluded him. Actually, such a compulsion might be the alcoholic's saving—as it can be the reader's undoing. The alcoholic might spend so much time searching he would have little time for drinking. Less drinking is obviously good for the alcoholic. Perhaps less reading is also—for the inebriate of print. I have been sitting here looking down on this tide of prismatic automobile tops, fighting the desire to hail a taxi and go off in search of a bookstore. If others with my weakness had banded together for mutual aid, I might call a fellow inebriate, ask him to come sit with me, hold my hand and feed me black coffee until the longing was conquered.

I have two dozen books with me. Stuart was taken aback. "I hope you didn't think there'd be time to read all of these," he exclaimed, fearing, I think, that I planned to use this week as a period in which to prepare for next week's work at the University of Washington. I said, "No, I don't." The next question—"Why do you have them then?"—I didn't answer at once. I feel panicky—perhaps that's too strong a word—traveling without them. I don't even like to go from my room to sit on the lawn without taking a half-dozen books with me. "It's my insurance policy," I told him finally. "Insurance against what? Boredom?" I don't think of it that way. Though perhaps in the back of my mind there is the conviction that as long as I have my books all other evils (beside the loss of them, I mean) will be bearable. Perhaps I am like a person who, having once endured a famine, wants always to have a supply at hand. Though I never suffered from any real famine of books. Less than I wanted, perhaps; though that still seems to be my state.

I always take with me not the same books but the same variety of books. Half, usually more than half, will be books I've read before. A couple of Thoreau's journals. Some poetry new or old. This time I have Robert Graves, Elizabeth Bishop, and Thomas FerriI. I have Michaux's Barbarian in Asia, which I've read before, and Sackville West's Inclinations and Mumford's Conduct of Life and Welty's Bride of the Innisfallen.

A curious but fascinating selection of books, don't you think?  Which makes me wonder what sorts of books you, dear readers, load yourselves down with when travelling—to the chagrin of spouses, taxi drivers, and hotel porters who must lift your unwieldy suitcases.  (This puts me in mind of a silly movie—of course, its name is not in my short-term memory—in which a man nearly breaks his back lifting a woman's suitcase and asks, "What on earth do you have in here?  Barbells?" to which she nonchalantly answers, "Of course.  Why?")  Or perhaps you merely strain the storage space on your Nooks and Kindles?

Unlike West, I don't generally travel with books I've already read—though that's not at all a bad idea, really, as a kind of insurance against the horror of boarding a plane or train for six or eight cramped, stuffy hours of travel and finding that the book you've chosen to lose yourself in is more tedious than listening to the disgruntled family of tourists arguing and sniping at one another in the seats behind you (one of which, inevitably, is a small child whose greatest joy in life is kicking the back of your seat until you imagine he must surely develop a stress fracture in his knee at any moment).

But I do take out my own kind of insurance against tedium and moodiness, I suppose, by attempting to bring a book to fit every mood—a murder mystery, a literary middlebrow novel, a cozy/funny book, perhaps a critical text or a history.  But should you think that the selection process is taken lightly, with books merely tossed carelessly into my suitcase, I'll tell you that one reason this post came to mind is because Andy and I have been finalizing our plans for a two-week stay in Italy in late October, and I'm already beginning to worry about reading material.

Now, London was a piece of cake.  I think I may actually have carried only two books with me (though I felt astonishingly naked in doing so), because after all I knew that visits to Persephone and Hatchards and Oxfam and various locales at Charing Cross would surely take place within a day or two of my arrival on UK soil.  But Italy is just a bit more challenging, isn't it?  Sure, there are English-language bookstores, but they are hardly as certain to bring joyful rewards fitting my taste as London shops were.  What are the chances of stumbling across a dirt-cheap Girls Gone By edition in Rome?  Or a Pamela Frankau first edition in Naples?  And what will I do if I can only locate cheesy contemporary fiction about disfunctional families or—even worse—only fiction by men.  I shudder to think.

So, dear readers, please do tell me your own strategies for being a biblioholic on the move!
Posted by Furrowed Middlebrow at 12:50 PM