After several months of admirable restraint when it came to book buying, something seems to have gone berserk in whatever part of my brain controls those impulses.  I blame it all on Las Vegas, because surely it was winning $160 that started me on this bender.  But be that as it may, just look at the damage I've done: 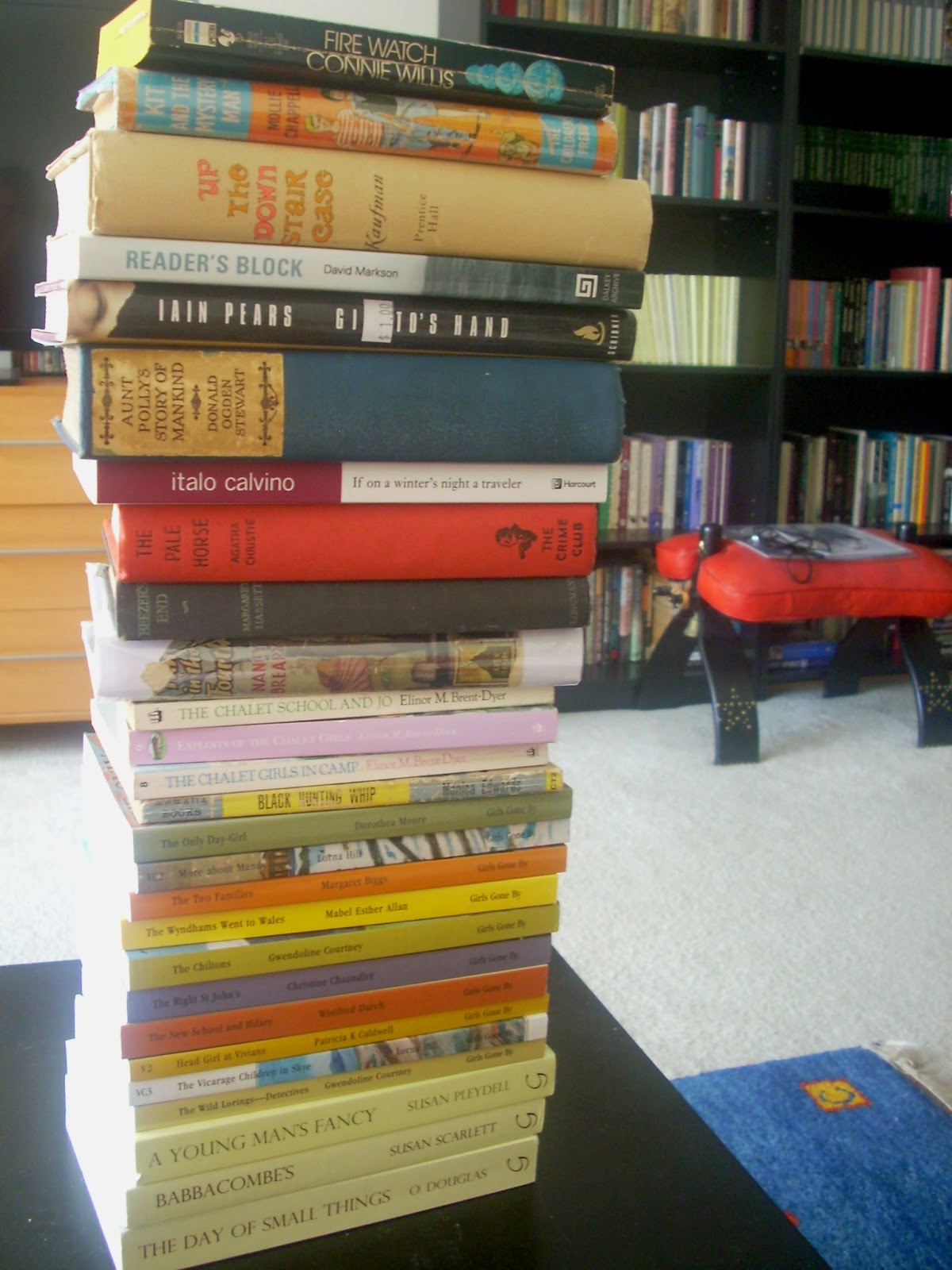 Now how on earth did I do all of that in just about a month's time?

Obviously, as those of you who are fans yourselves can tell from the spines, quite a lot of my winnings went toward fleshing out my Girls Gone By collection—including quite a number of now out-of-print titles, some of them lucky finds at quite bargain prices (and some distinctly not at bargain prices): 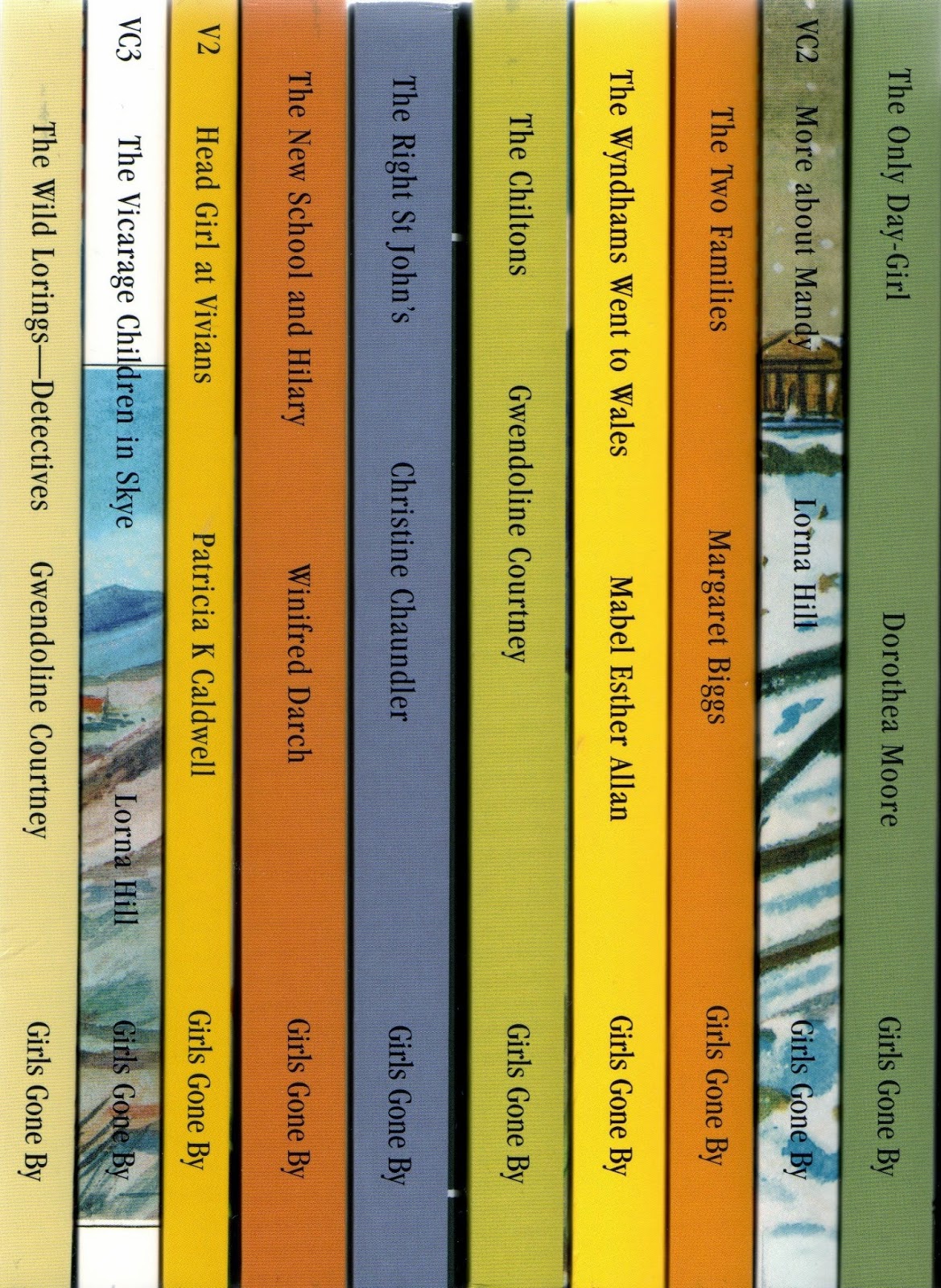 I don't imagine that most of these will get their own reviews, or else my blog will be even more derailed onto school stories than it already has been, but I will say that I just finished Dorothea Moore's The Only Day Girl a few days ago, and was absolutely charmed by it.  Completely far-fetched in many ways (a girl climbing down the chimney of a burning room to get the window open and rescue another girl who has passed out from the smoke—what's unrealistic about that???), but good fun and surprisingly sensitive in the presence of a major character who is blind but fiercely independent and capable.  Perfect brain candy.

(I hesitate to even admit that there are at least five more Girls Gone By books winging their merry way across the pond to me as I write this—definitely a moratorium on GGB books must be declared, at least until I've had a chance to catch up a bit!)

I also picked up two non-GGB books that fit the theme.  One was reprinted by GGB, though I found it in an adorable, earlier paperback edition: 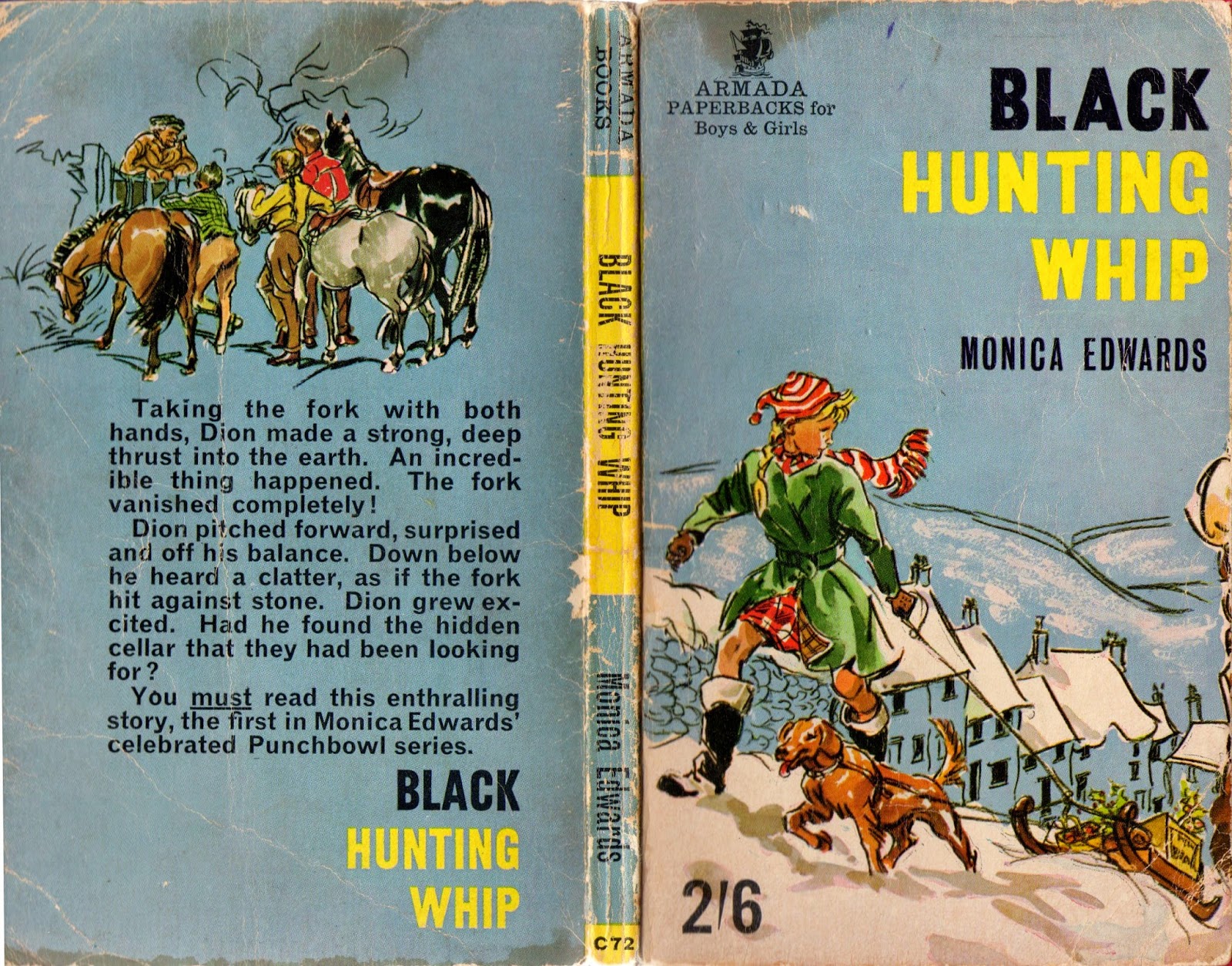 And the other seems to have provided the name to GGB's "Fun in the Fourth" series: 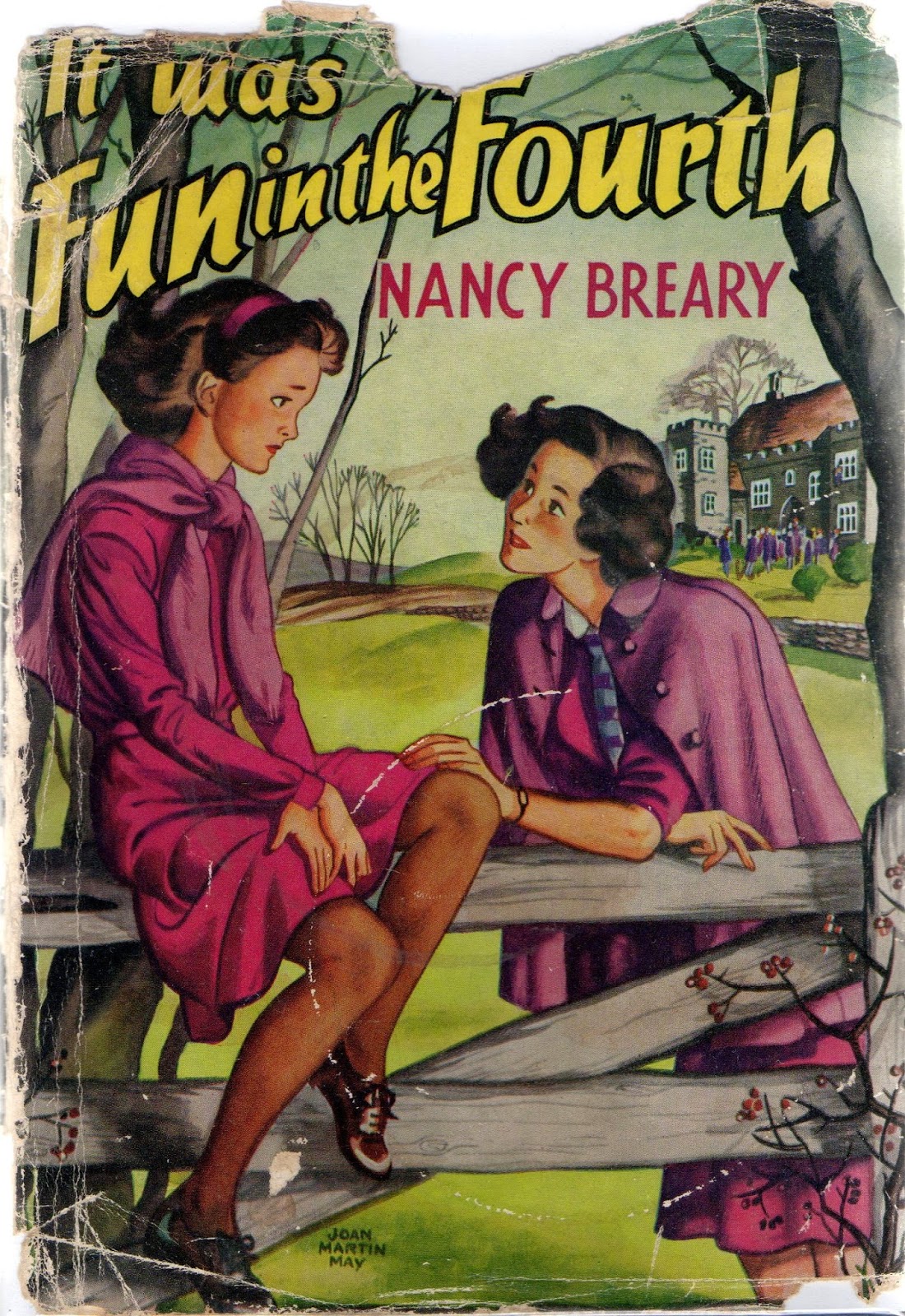 And I do love looking at publisher ads for other books, so I have to share the back cover of the Breary book as well: 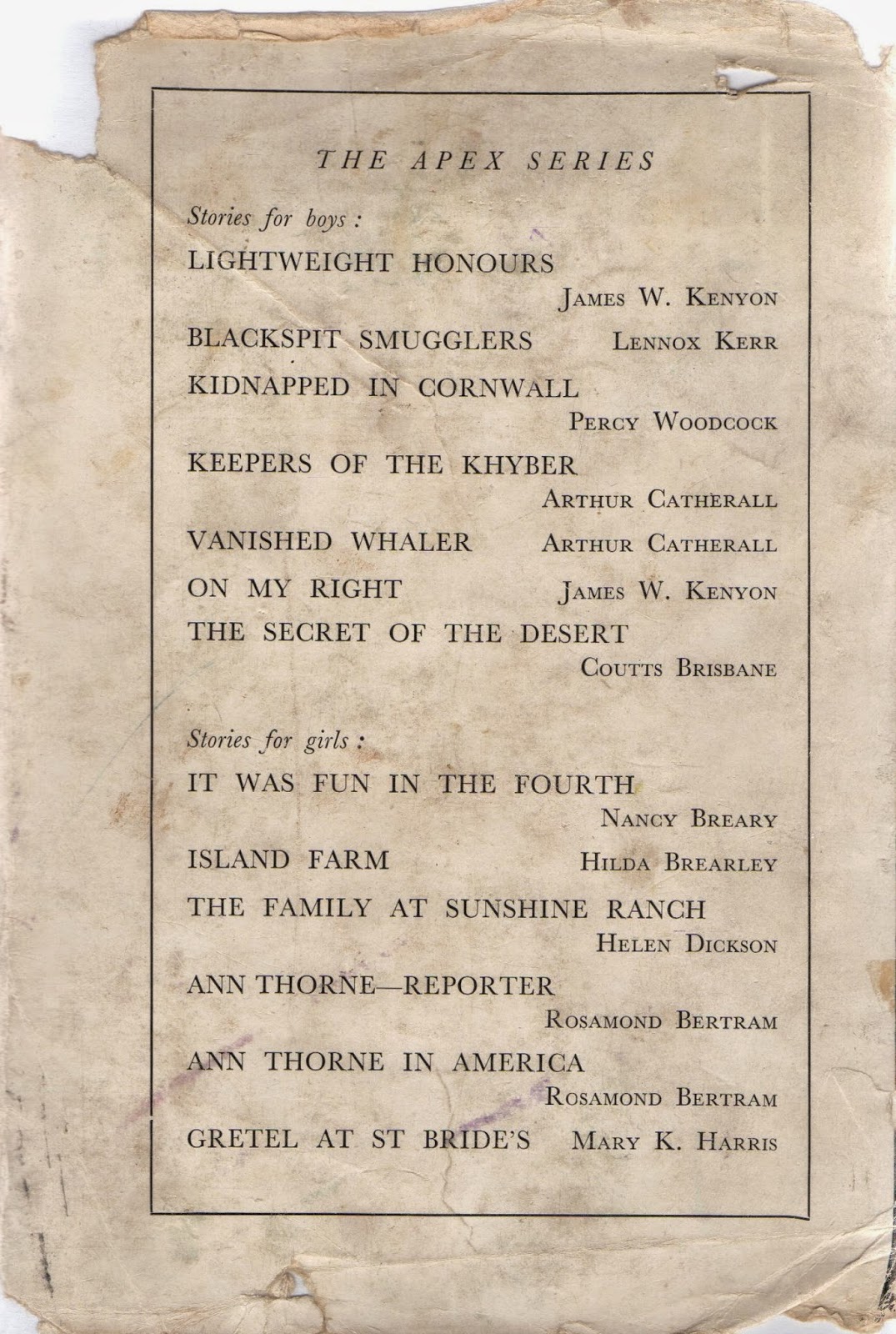 I picked up three more Chalet School books in a recent Awesome Books order (carefully chosen from among the paperback reprints that were unabridged and/or only slightly edited):

And then there was this rather exciting acquisition:

I wrote enthusiastically about Margaret Hassett's Sallypark a while back, and was excited to discover that she also wrote two novels for adults that were apparently set in a school.  I'm still in hot pursuit of the first, Educating Elizabeth, but Beezer's End is the sequel written more than a decade later, and it's now waiting patiently on my TBR shelves.

What would a book buying spree be without a few Greyladies thrown in for good measure (including another set in a school):

Bargain-hunting has also paid off in the past few weeks.  Those $1 book sales on the steps of the San Francisco Public Library, which are now a mere two blocks away from my new job, are clearly going to crowd my bookcases:

I've been thinking of reading the Bel Kaufman book—an American school story (of sorts) for adults, set in a rough inner-city high school in the 1960s, which became a massive bestseller when it first appeared in 1964.  For $1, how could I pass it up?  I was also interested in the Connie Willis story collection, as the title story is her first to feature time-travelling historians visiting London during the Blitz.  And as for the Iain Pears book, well, what can I say?  I'm a sucker for his art historian mysteries.

A visit to Berkeley last weekend also paid off in spades—but at bargain prices—at the Friends of the Berkeley Public Library bookstore:

I was delighted to find this lovely and absolutely pristine Crime Club edition of Agatha Christie's The Pale Horse (a nice replacement for the beat-up old copy I had before).  And for those who have never heard of him (probably a good number of you), Donald Ogden Stewart was an American novelist, humorist, and screenwriter whose prose was a bit like Dorothy Parker on laughing gas—zany, nonsensical, and great fun through and through.  The book, from 1923, has amusing illustrations and rather lovely endpapers: 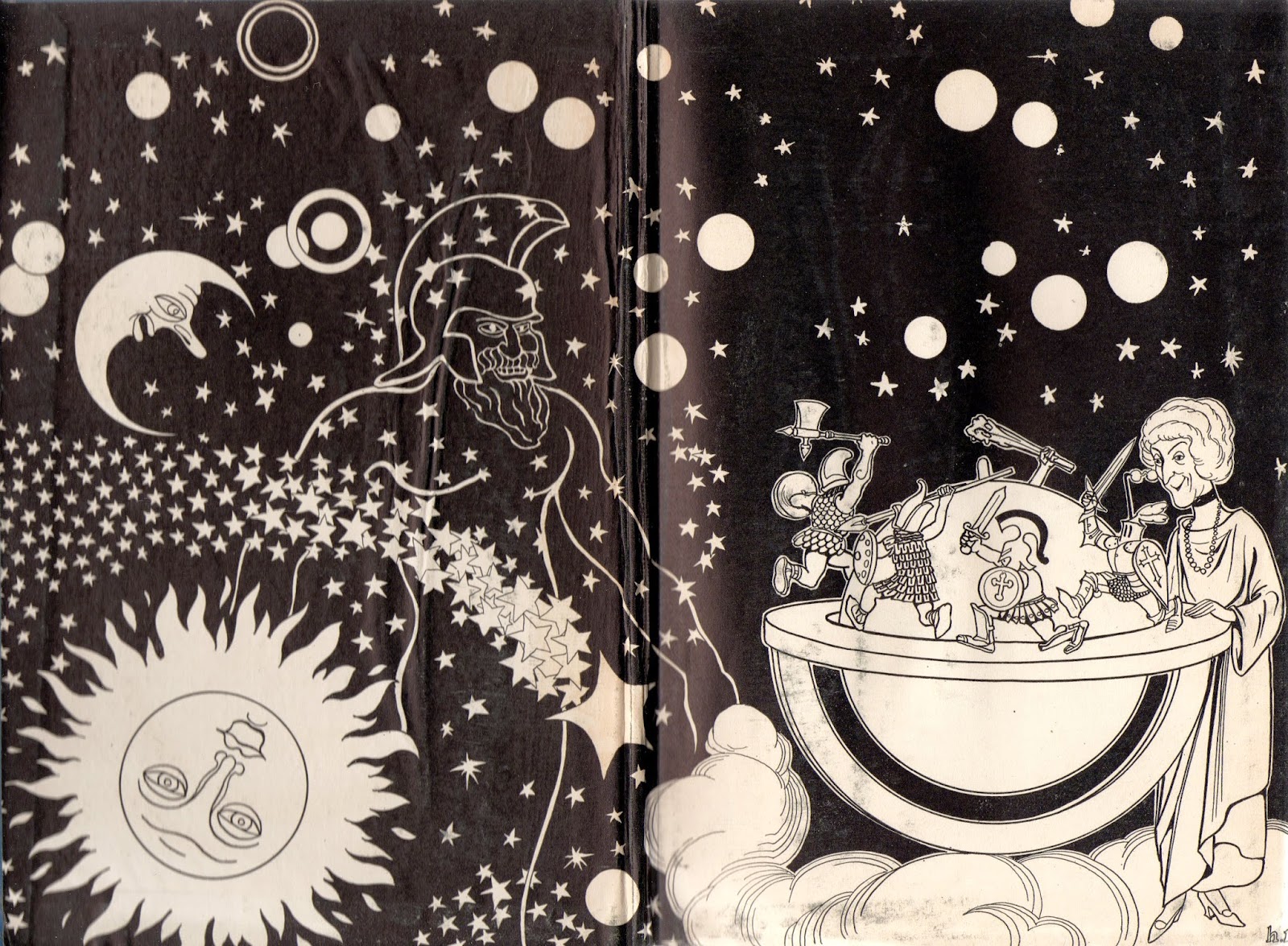 Both of those books were in a section set aside, basically, for decoratively old books, and the grand total for them both was < $5.

And somehow I had forgotten that I had old trade credits at not one, but two, second hand bookstores in Berkeley, so I thought I'd see what I could find.

First, for a mere $4, I came across this boys' title by an author I only recently added to my list: 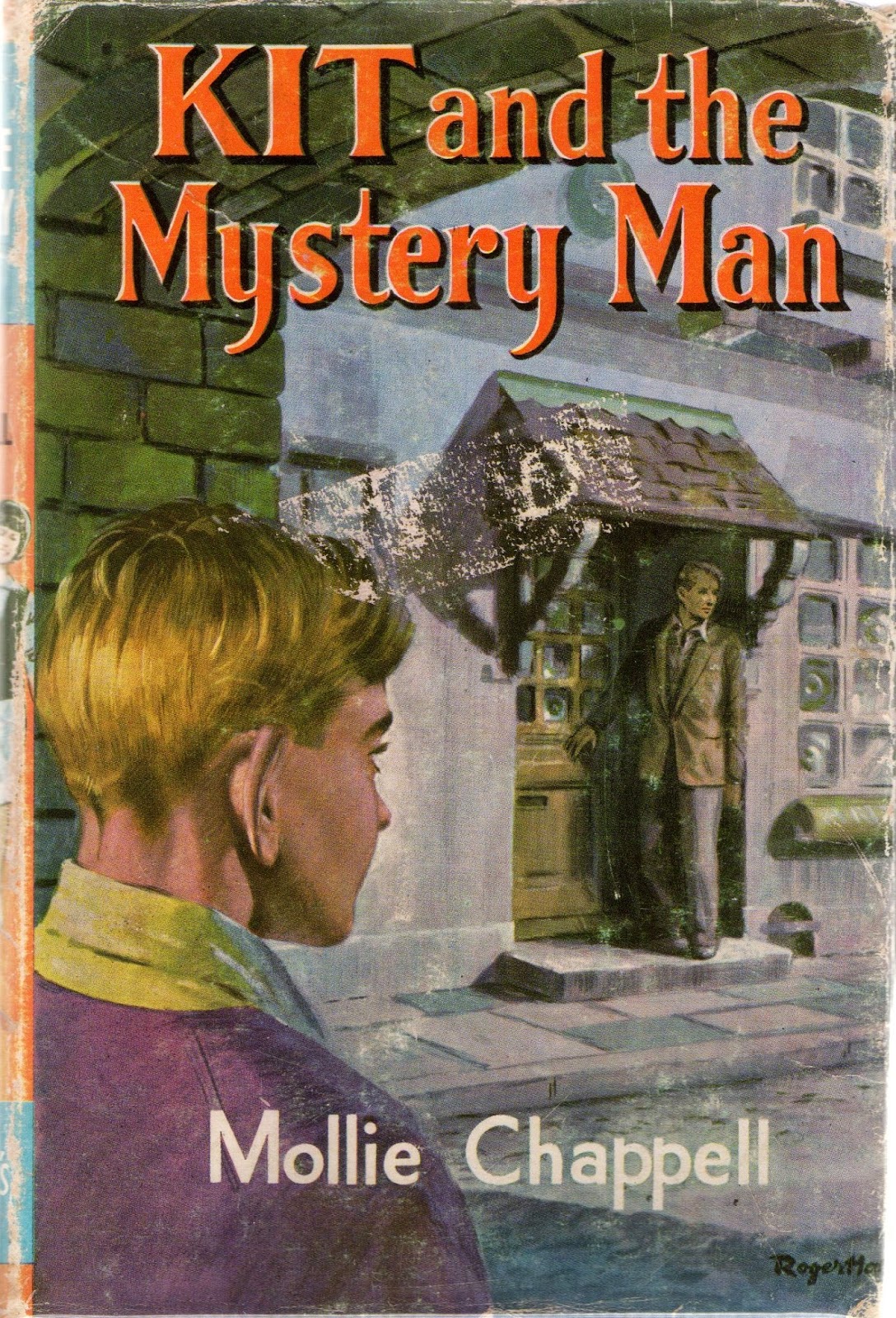 The fact that it had a list of similar titles on the back cover may have contributed to its irresistibleness: 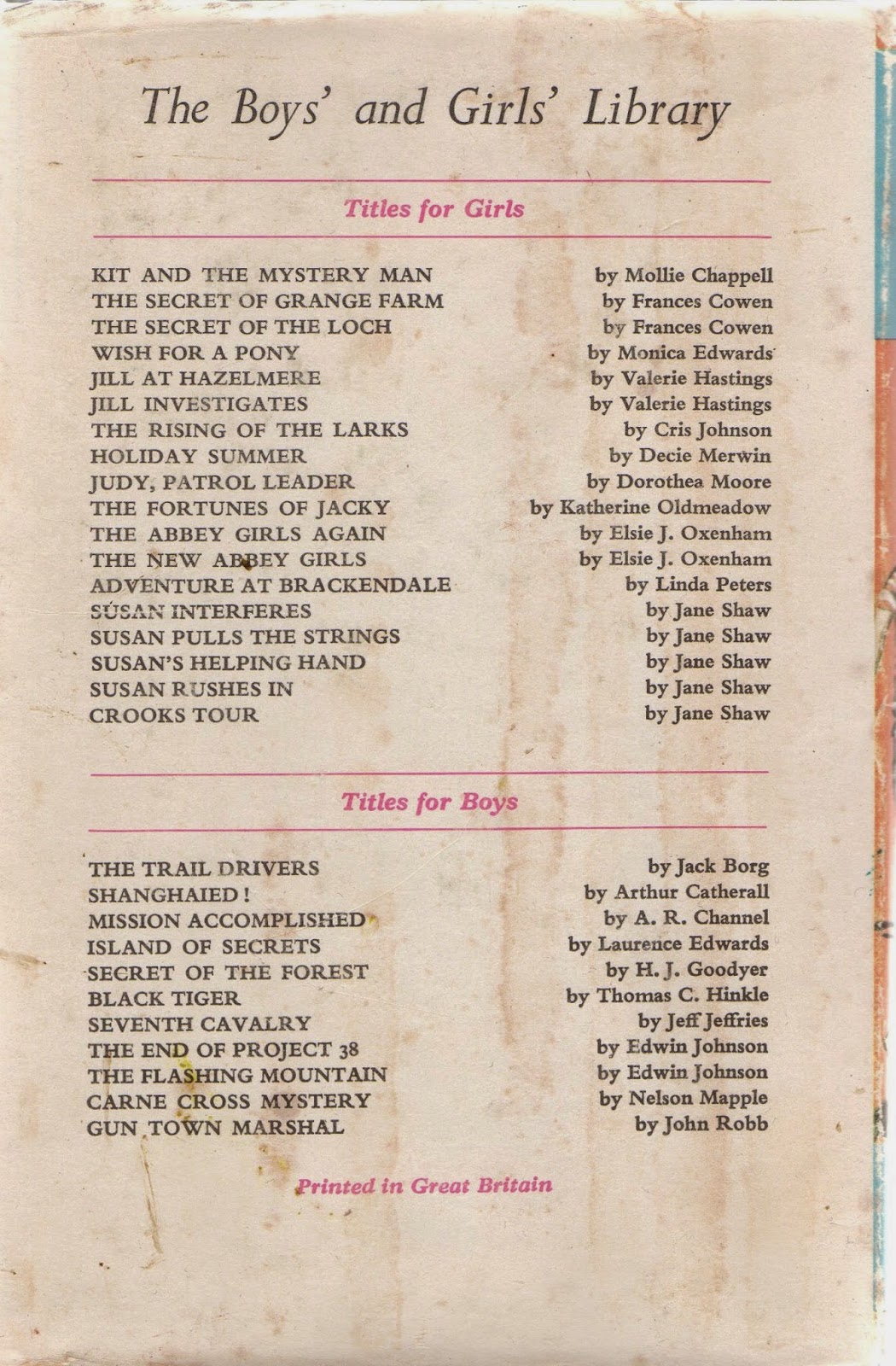 Then I found two books distinctly outside the usual scope of this blog, but they're among my favorites and I didn't have decent copies of either:

(If you've never read one of Markson's late "novels," you may or may not love them as I do.  They are basically about an obsessive writer remembering or assembling all the bits of literary trivia he has accumulated over a lifetime of reading, while at the same time musing about the tragic ends of writers and artists and his own approaching end.  Perhaps a bit bleak, almost entirely plotless, and hardly qualifying, except in the most postmodern way, as novels as all, but I find them wonderful bedside reading for all of the fascinating tidbits of information they contain. I might have to write more about Markson in the future...)

And finally, last but certainly not least, I was in search of a way to spend my whopping $8 credit at Shakespeare & Company.  I was eyeing a couple of nice old Angela Thirkells, and I got Andy to take a pic of the lovely author photo and bio from the back of one of them: 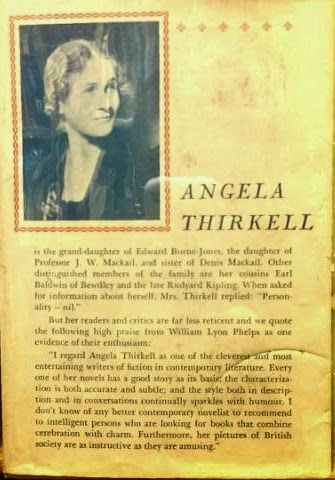 But as soon as I came across this book, I knew my decision was made for me: 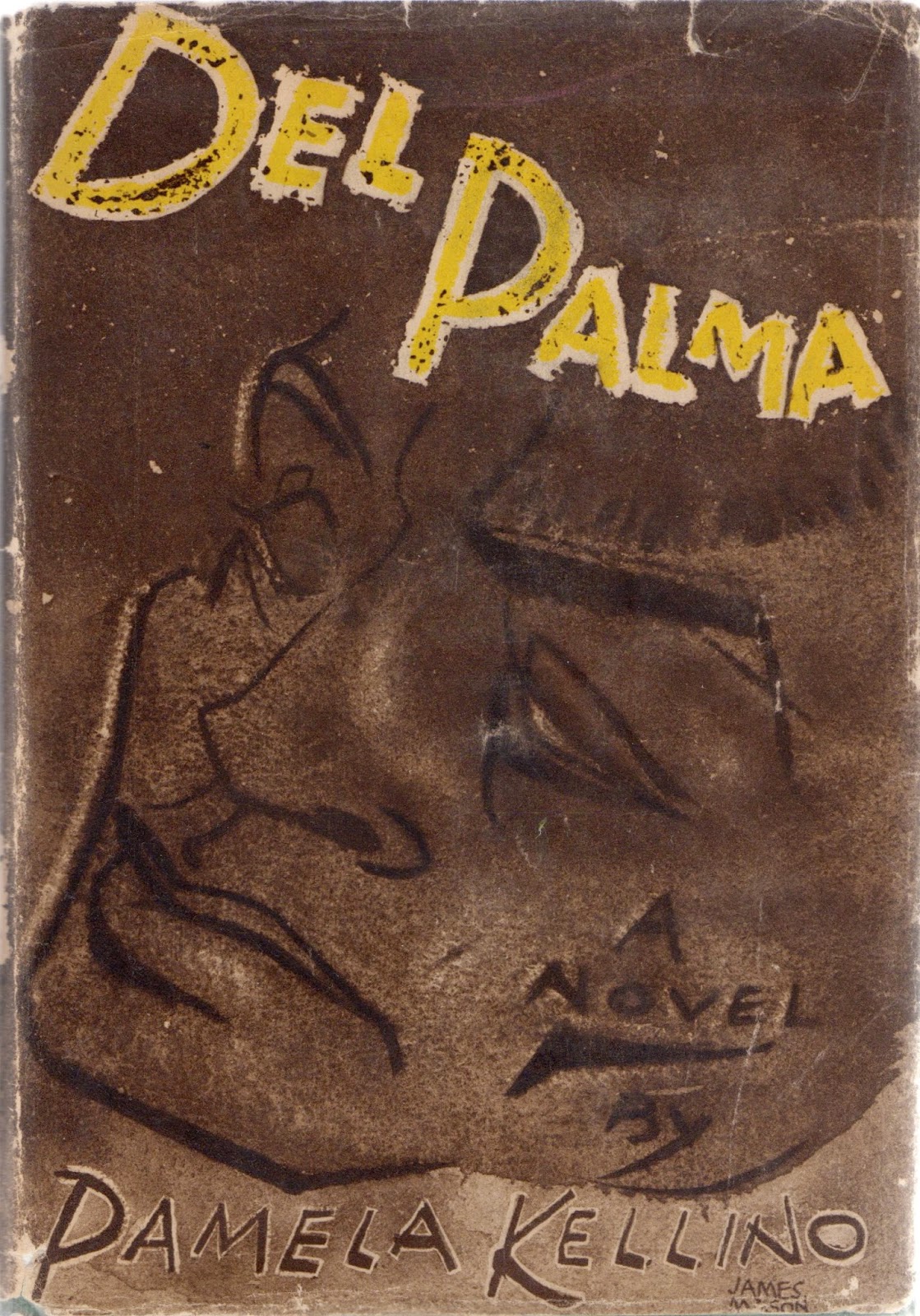 It's become increasingly rare for me to just stumble across new authors for my Overwhelming List in bookstores, so it was an exciting moment anyway, but realizing that the book sounded genuinely interesting made it even more exciting.  And looking at the author pic and bio on the back piqued my interest even more: 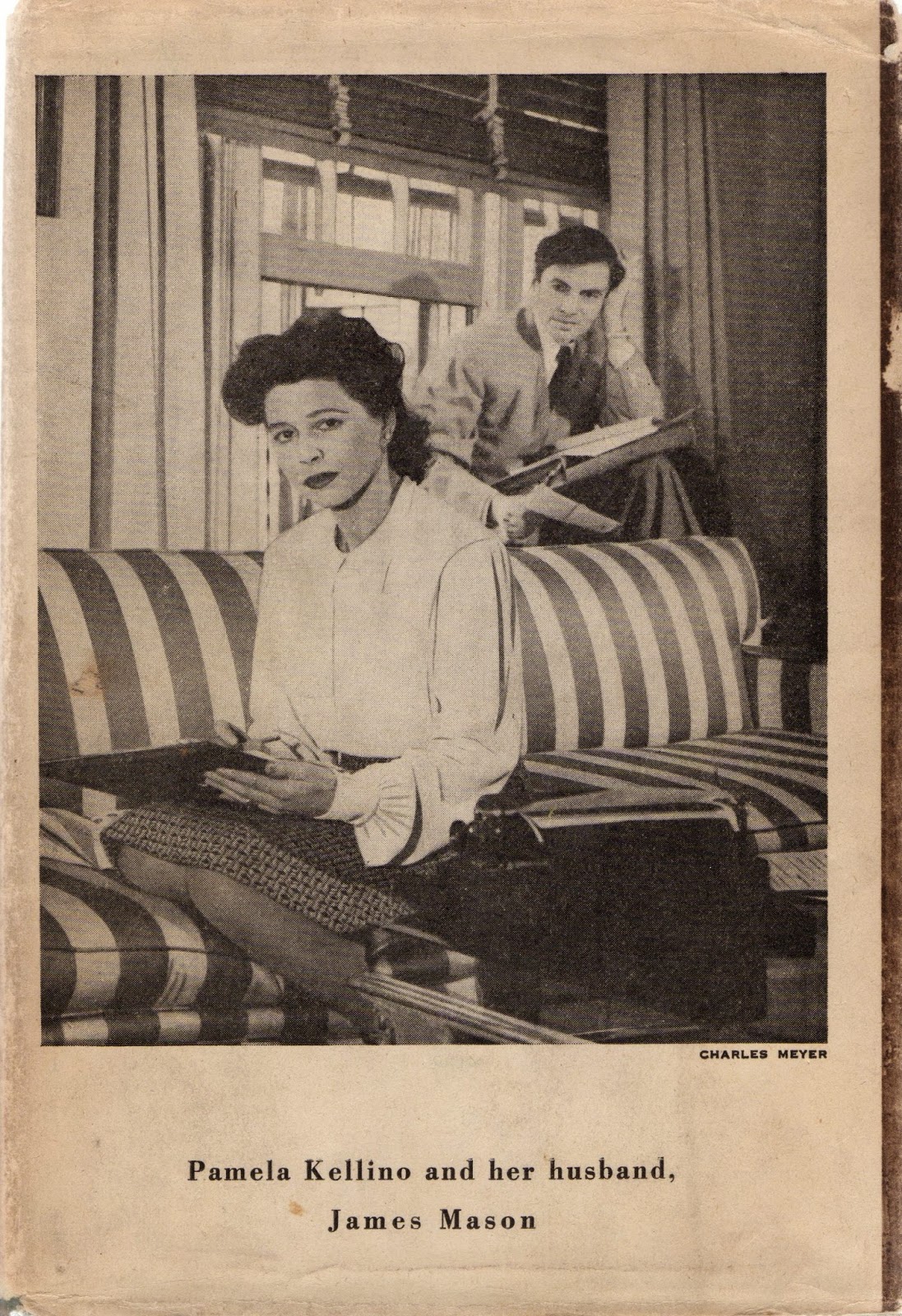 How on earth had I missed for so long knowing that Mrs. James Mason wrote several novels in the 1940s?  I have a feeling that this one will warrant a review of its own before long, so mum's the word on it except to say that I'm eager to finish this post so I can go on reading it…

My name is Scott and I am a biblioholic.
Posted by Furrowed Middlebrow at 2:39 PM