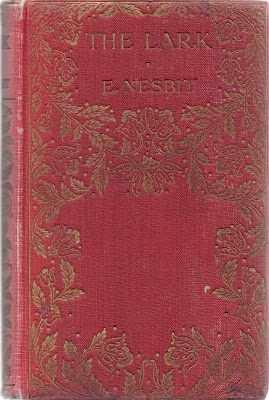 This is an exciting book for me to review, since it's been on my Hopeless Wish List for a while and I had practically given up hope of ever reading it unless someone finally reprinted it.  But recently, the came through for me.  Only a handful of libraries even have the book and they all have it in Special Collections that are "library use only."  While I'm not entirely sure of the wisdom of U of S in lending out such a fragile and hard-to-find title, I am thrilled and grateful that they did.

I'm also rather ashamed to admit that this is only the second Edith Nesbit I've read.  A couple of years ago I read The Red House (1902) and enjoyed it, but somehow didn’t feel compelled to read more.  I've always meant to read The Railway Children, at least, or one of her later novels for adults like Daphne in Fitzroy Street (1909) or Dormant (1911), but it was really the Encyclopedia of World Biography's description of The Lark that got me excited about Nesbit again.  The EWB called the novel "a realistic depiction of two unmarried women struggling to maintain their financial independence by operating a boarding house."

Now, I'm very glad this description made me keep searching for this book, because it turned out to be immensely entertaining and well worth the effort of tracking it down.  But be that as it may, the EWB seems to have a rather different idea of the term "realistic" than I do…

The Lark opens in about 1913, with 13-year-old Jane Quested defying her meeker friends and going into the woods to utter an incantation they've discovered in a book.  The spell, spoken aloud just after the strike of midnight, is supposed to reveal to her the man she'll marry.  As it happens, John Rochester, a few years older than Jane, is walking in the woods—cooling off after a talk with his mother who has been urging him to marry a Miss Antrobus.  Naturally, he stumbles upon Jane at the very moment that she speaks her incantation and then retreats quickly in embarrassment.

Fast forward to six years later—conveniently bypassing World War I—when Jane and her cousin Lucilla are pulled from school by their guardian (both are beneficently without handy parental supervision), who sets them up in a lovely little cottage on the fringes of London and informs them (by letter) that he has gambled away most of the inheritance they should have received but is leaving them the house and £500 to be carrying on with.  Lucilla is a bit disheartened by this, but Jane has a different attitude:

"I want to say I think it's a beastly shame."

"No, no! "said Jane eagerly. "Don't start your thinking with that, or you'll never get anywhere. It isn't a shame and it isn't beastly. I'll tell you what it is, Lucy. And that's where we must start our thinking from. Everything that's happening to us—yes, everything—is to be regarded as a lark. See? This is my last word. This. Is. Going. To. Be. A. Lark."

A short while later, in one of the best formulations of the novel's gently feminist theme, Jane elaborates:

"When did two girls of our age have such a chance as we've got—to have a lark entirely on our own? No chaperon, no rules, no..."

These passages set the charming, energetically perky tone of the novel, which (in my opinion if not EWB's) doesn't exactly reek of the gritty realism of economic struggle.  The girls discover there's a market for flowers from the little cottage's garden, then start eyeing the much larger garden of a huge empty house nearby.  Before you can say "the world on a silver platter," they happen to meet the nephew of the owner of the house and are granted the run of the garden.  (The nephew—of course—turns out to be the aforementioned John Rochester, though Jane doesn't recognize him.)  After they’ve made a success of that (and, in an amusing scene at Madame Tussaud’s, stumbled across a perfect gardener to grow the flowers), the uncle grants them the use of the house as well—we should all encounter such benevolent uncles—and they start accepting “pigs” (aka P.G.s, aka Paying Guests).

Sure, there are some briefly and lightly spooky moments such as those from Nesbit’s other, darker work, but they’re played here purely for comedy.  The pigs—er—guests turn out to include Miss Antrobus, with whom John’s mother is still trying to match him, as well as a charming family of artists with a secret to hide.

All in all, it’s about as much "a realistic depiction of two unmarried women struggling to maintain their financial independence by operating a boarding house" as Notting Hill is a hard-hitting dramatization of the difficulties facing bookstore owners in the current economic climate.  It’s often laughably unrealistic, but we shouldn’t let that trouble us, because the key point is the “laughable.”  The Lark is really an extremely entertaining, cozy little novel.  There are a few loose ends in the plot, but it’s so cheerful at heart that I didn’t lose any sleep over them.

Despite it’s lightness, there were a few little morsels that struck me as interesting.  Poor Miss Antrobus, for example, who at the time the novel is set has apparently been getting thrown at John Rochester for a solid six years—with no result—struck me as a rather intriguing character.  She seems to be presented in much the same way as “capable women” are in other novels—to be the butt of a jokes (the ultimate example perhaps being in Delafield’s Faster, Faster)—but happily, Nesbit doesn’t seem to see her that way.  Miss Antrobus tells Jane and Lucilla that while they were in school during the war years, she was working in a French hospital, and she is now volunteering for the Help for Heroes Society before settling into studying Political Economy.  That the girls first think she says “Domestic Economy” is perhaps revealing, because despite their lightly feminist statements, it’s clear that the girls are only biding their time until marriage, while Miss Antrobus may, it turns out, be as little interested in marrying John as he is in marrying her.  John tells Lucilla that “the war had been the making of her, and he'd never thought she had so much stuff in her.”  Perhaps she never thought she had either?  It made me sort of wish Nesbit had written a sequel about Miss Antrobus.

Along these lines of “feminism lite,” this passage early in the novel, when the girls’ headmistress has just told them they get to leave school, jumped out for me:

Outside her door they fell into each other's arms, breathless with whispered ecstasies.

"How quite too perfectly ripping!" said Jane.

"To-morrow!" said Lucilla. "It's like something in a book—a bolt from the blue."

"A bolt from the blue-stockings," said Jane. "Come away, or she'll catch us."

It’s a clever turn of phrase, but who exactly is the blue-stocking here?  It seems as if Jane is calling the headmistress a blue-stocking, but if so, then the term would seem to be a negative one in Jane’s mind.  I tried to read a little about the term and how it has been used, but I suspect some of the nuance is escaping me here.

And finally, as it’s my habit to leave you with a bit of humor, there is this hilarious snippet about the girls’ homemaking skills, which also provides an example of Nesbit’s ironic commentary on events, scattered entertainingly throughout the novel:

They were occupied in covering two easy-chairs with bright chintz. I am sorry to say that they had cut up a pair of curtains twelve feet long by six feet wide so as to avoid the extravagance of buying new cretonne to brighten the sitting-room which they were arranging for their new guests. The curtains were beautiful, with purple birds and pink peonies and pagodas of just the right shade of yellow to be worthy to associate with the pinks and the purples. The curtains were lined and bordered with faded rose-colored Chinese silk, and pounds could not have bought their like. Shillings, on the other hand, and not so very many of them either, could have bought the cretonne. Pity, but do not despise these inexperienced housekeepers. They did not know—how should they? Even the most charming girls do not know everything. There was a girl once who cut up a fine hand-woven linen sheet to line a dress with and thought she was being economical, but that is another, and a sadder story.

It’s the last line that made me laugh harder than anything else in the novel.

I have on my so-called "short list" of books to read several other early novels I've stumbled across that also deal with women making their own livings (or trying to) by going into business.  Clotilde Graves' Maids in a Market Garden (1894) is about three women in trying to support themselves selling produce.  According to the Oxford Companion to Edwardian Fiction, in Rosa Gilbert's novel Cynthia's Bonnet Shop (1900), "two poor Irish sisters open a milliner's shop in to support their invalid mother."  And Netta Syrett's The Three Women (1912) deals with two women running a curio shop in (and a third who complicates matters).  Of these earlier novels, only the Gilbert title seems likely to take the economic part of the endeavor at all seriously.

Of course, examples of women in business become more common in later years, when real-life women in business were becoming more common as well and their experience more of interest as fantasy for women readers who likewise had to earn their keep—Dorothy Whipple’s wonderful High Wages (1930) comes to mind—but it’s interesting to me that most of the early examples I’ve come across seem to take the topic rather lightly.  Am I forgetting some better examples?

At any rate, serious or not, realistic or not, The Lark is indeed…well…a lark.
Posted by Furrowed Middlebrow at 7:13 AM