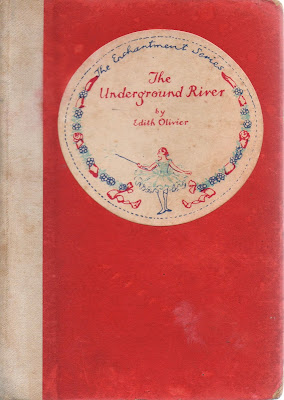 Clearly, it's about time for me to retire my original Hopeless Wish List, as its hopelessness has happily been dwindling away!  Today, I get to cross off yet another title, thanks to the extraordinary kindness of a fellow blogger.

Those of you who follow Simon's fascinating blog at Stuck-in-a-Book may have noticed his post on this book last month, which had been a gift to him a few years ago.  If you did, you may also have read at the end of that post of his intent to "pay it forward" by forwarding the book—the only Olivier title which had seemed truly hopeless to track down—across the Atlantic to me. 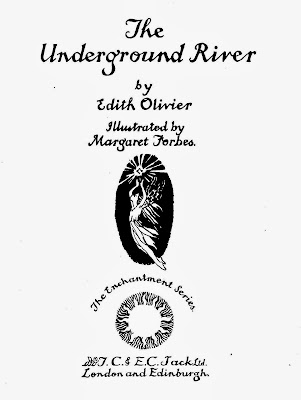 The book arrived just a few days ago, and it's an adorable little thing—as you can see.  So, in short, thanks very much to Simon for so generously making this post possible, and for allowing me to cross another title off my Hopeless Wish List.

Of course, not being known for my self control, I immediately tossed aside the other books I was reading and dived right in.  And once started, I couldn't stop reading, because Olivier's quirky charm is evident throughout.  You can sense it right away in the opening paragraph:

This story begins with a cross aunt; and if she hadn't been so cross there would have been no story to tell. Aunts now are generally not so cross as they used to be. In the old days, they were very alarming people indeed. But now, when they cut their hair short like their nephews, and cut their skirts short like their nieces, they don't seem much older than the children themselves, and play with them as if they were all the same age. Aunt Lucinda was not really the children's aunt; she was their great-aunt, which means that she was the aunt of their father, so she was very old, and was allowed to be cross, as the old aunts were.

Tony and Dinda, whose parents are in India, are sent to stay with their distinctly cross Aunt Lucinda—who, among other things, raps the homesick Dinda across the knuckles with a ruler and scoffs at the notion of magic, thus establishing her credentials as the novel's villainess. 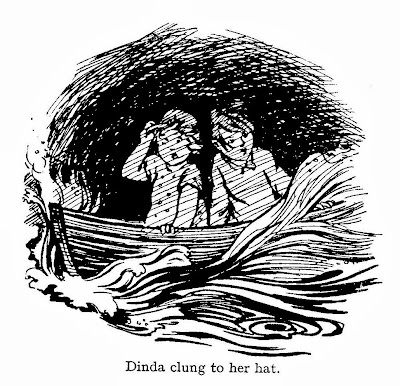 Not long after their arrival, a dowser arrives to find a good location for a well on Aunt Lucinda's land, and the children discover 1) that Dinda herself is a dowser, and 2) that an underground river runs right under their aunt's property.  They then hatch a plan to find the river and ride it to the sea, where they will stowaway on a ship for India and return to their parents.

Naturally, it wouldn't be a proper children's book if it didn't require a considerable suspension of disbelief, but I have to say that I found the fantasy of the underground river—and the surprising inhabitants the children discover there—to be quite effective (and fans of Jeanne DuPrau's Ember books might find Olivier's tale a worthy precursor).  A few months ago a reader commented that he had managed to buy a copy of the book for his mother, who remembered it as one of her favorites as a child.  And I can quite see how this would be.  It seems like the kind of fantasy which, encountered in childhood, would linger in one's mind.

(I would say that it's surprising that the book has never been reprinted, but I fear I'm starting to sound like a broken record.)

The children's initial descent into the underworld is rather vivid and (as Simon pointed out in his review) a bit humorous:

It was a very mysterious beginning to the voyage. There was not a gleam of light. The children felt their way with their hands along the river banks, holding the boat off from the shore while the current carried them along. Now and again their faces were brushed by invisible flying creatures-bats or beetles or unknown birds-which flew against them in the dark. Dinda clung to her hat, for the servants had told her that if a bat got into her hair it could never get out till her head was shaved, and she did not like the thought of one flying in now, and having to stay there for the whole of the dark voyage.

After a time they felt hungry, but they found it was very difficult to eat their meal in the dark. They each had a knife and fork, but they had never guessed how hard it would be to cut slices for themselves off a sirloin of beef, with no butler to carve, no carving-knife and fork to carve with, and no light to carve by.

If only they had thought to bring along a butler on their adventures!

It turns out there is a whole civilization underground, extending well back into history and supported by Robin Hood-esque peddlers who steal supplies from above and sell them to the under-inhabitants "in exchange for stones and pebbles and suchlike useless things which were found under the earth"—i.e. gemstones, presumably?  The children encounter Mother Caldey, who came underground years before because the waters help her gout; are nearly enslaved for a year and a day at the Tinker's Camp; and meet dwarfs and fairies and bootleggers. 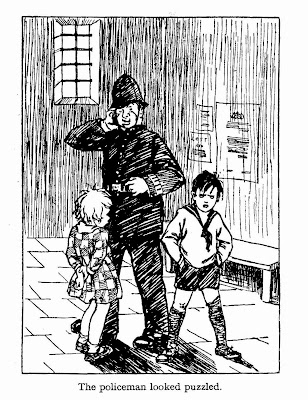 Mother Caldey is my favorite of these, as she is a rather charming—if bone lazy—good-natured old women who soaks her feet and waits for visitors to come along and tell her stories.  Though it must be acknowledged that were she alive today she would undoubtedly make a compelling episode of Hoarding: Buried Alive:

The two children went into the cave. It was a vast place, and its walls were like a great warehouse, packed with things. Near the door were cups and saucers, hundreds of them, perhaps thousands. They were piled on shelves one above the other, and more than half the cups had been put away dirty. The others seemed never to have been used at all, and were mostly still packed in the paper in which they came from the shop. The back of the cave was stacked with blankets of all colours-red, white, grey, and brown-and they too were piled in heaps to the very roof of the cave. The place smelt stuffy, but it was warm and comfortable after the cold of the night before, and the children wished they could have had some of Mother Caldey's blankets to cover them through that shivering night.

I have to admit that some small, anti-social, bone lazy part of myself identified just a little with Mother Caldey, and I briefly flirted with an image of an idyllic life of soaking my feet in the hot springs while leisurely perusing novels and memoirs by little-known British women.  But then I realized that the steam from the hot springs would wreak havoc on my books, and that would certainly not do. So above ground I will stay.

I imagine that grad school Scott could have made something rather psychoanalytic out of Mother Caldey's cavern next to a caldron, particularly in view of its deeper, hidden depths:

So Tony and Dinda washed up, and then they set to work and tidied the part of the cave which was nearest the door. They felt they could not attempt to do anything with the back part. It was a confusion of things, half hidden in the darkness—things that had been used and put away one behind the other in a dirty heap. But Mother Caldey was delighted to see even a part of her home made neater, and she said she hoped the children would stay a day or two with her before they went on.

It all sounds a bit id-like?  But fortunately for us all, grad school Scott rarely rears his ponderous head these days, and blogger Scott is happy enough just picturing this bone lazy crone (and, obviously, using the expression "bone lazy" repeatedly) buying new dishes and clothes to keep from having to wash the old.

At any rate, the book is really all great fun, and will no doubt be a periodic re-read for me.  It's also a wonderful little addition to Olivier's body of work.  And I leave you for now with not so much a funny ha-ha passage—since Olivier is known for her odd charm more than her hilarity—but rather a funny unusual passage.  How many children's books today (or, when it comes down to it, ever) would present two small children and a bootlegger's horde as follows?:

Tony hastily picked up two of the big fisherman's coats, and taking a bottle of whisky which had been partly emptied, he hurried back to Dinda with his booty. They were both still too occupied with their cold and misery to ask themselves to whom these spoils belonged, or to fear that they might suffer for having carried them off, but they both quickly took off their wet and freezing clothes and wrapped themselves each in one of the thick, warm, woolly coats. Then they both drank a few mouthfuls of the whisky. It was very horrible and burning in the mouth, but it made them both feel marvelously warmer when they had drunk it down, and now they could begin to look forward to the future, and to discuss what they had better do next.

With an accompanying illustration, no less!  I just bet that they did feel marvelously warmer after a few shots of whiskey!  Purely medicinal, of course.  And hey, this was the 1920s after all... 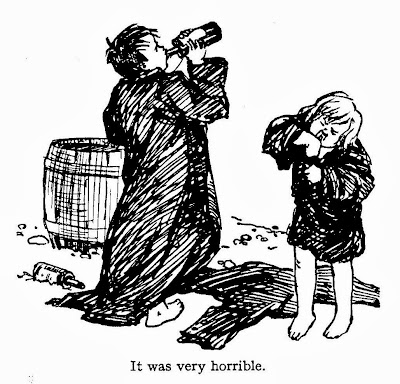 Posted by Furrowed Middlebrow at 10:34 AM