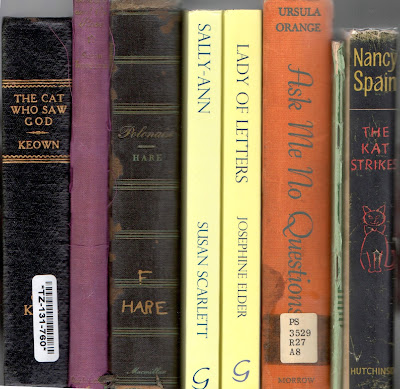 Some of you may be getting tired of reading about my compulsive book shopping, but I can't resist sharing this one.

A few weeks ago, I wrote about the Friends of the San Francisco Public Library Big Book Sale, and I mentioned that while I always budget $120 for these sales twice a year (and sometimes blow that budget, to be honest), this year I exercised surprising restraint and had $60 left over.

Now, I don't really consider myself to be a book collector, and I am notoriously stingy about spending money on books—which is perhaps a little surprising, but which certainly explains my love for Awesome Books, with their incredible $4 bargains!  So it took me a month and a half of agonizing before I decided to splurge on a few books that cost more than $4 (though, happily, there were a couple of cheap books in the mix as well).

First, my introduction to Nancy Spain—a writer I only recently added to my list: 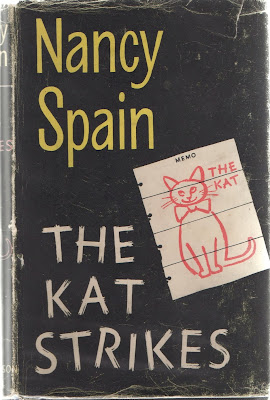 Although Spain's other wacky mysteries also sound like fun, this comic "thriller" caught my eye because St. James Guide to Crime & Mystery Writers noted that its "description of post-Blitz austerity in London is particularly fine."  It couldn't have been more irresistible to me if they'd said it was made of chocolate… 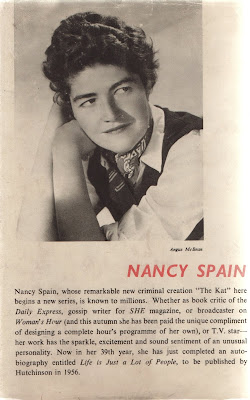 I had to show off what a cute little book it is.  And because you know I love book advertisements, here's the back flap of the book, advertising two of Spain's other titles:

The second of which is probably now my second-favorite mystery title ever—the first being by a writer I've never read, Dulcie Gray, who brilliantly titled a 1971 mystery Deadly Lampshade…

Two more of my acquisitions are also by writers I only recently came across.  I wrote just a few days ago about how seductive a contemporary advertisement made Martin Hare's 1939 novel Polonaise.  And now you see that I wasn't lying—since I couldn't find a copy in any library, I had to track down one of my own.  Although my usual good luck with Amazon sellers didn't hold—the book was heavily water-damaged and smells as though it may have spent the last few decades in a nuclear waste dump—it does look like it may once have been a nice book!

I took pictures before scanning and tossing the book (it was really too toxic to keep in the apartment without appropriate HazMat precautions), including the library card which shows (and perhaps this explains its condition) that it hails from the Ft. Benning, Georgia, U. S. Army Training School for Boys.  I guess 1967 is when it was relocated to the nuclear waste dump.

The next one is by a writer who is such a recent discovery for me that I haven't even included her in an update yet.  I came across Anna Gordon Keown only last week.  She was mainly known as a poet, but she also wrote four novels, and the siren song of the first, The Cat Who Saw God (1932), about the Roman Emperor Nero reincarnated as a cat living with a broken-hearted spinster, proved just too much for me to resist.  Happily, this one turned out to be a lovely little ex-library book: 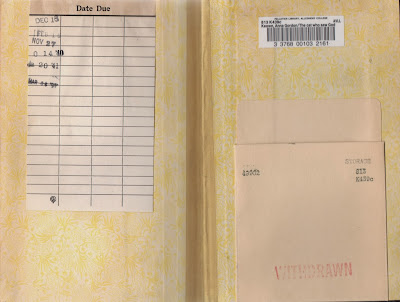 I know lots of people would look at a blog with images of the library cards of old books and think the blogger must be quite mad, but just imagine that it had only been checked out once since World War II, and that nearly two decades ago.  I'm happy to have been able to give it a home—especially since apparently no one else wanted it!

Then there were two more Greyladies books added to my collection for cheap, courtesy of Awesome Books: 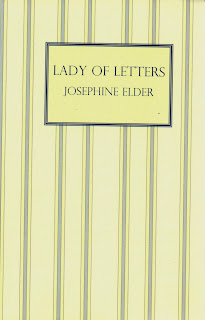 Looking forward to reading my first Josephine Elder and my second Noel Streatfeild/Susan Scarlett.  (I still need to write about the first!)

And in all of my agonizing over which books I should buy, I found two more that I was tempted by but found I could get from the library—Ask Me No Questions, by Ursula Orange, a somewhat D. E. Stevenson-esque wartime novel, and Lesley Storm's wartime play Heart of a City.  I don't usually read plays, but Heart of a City is set, in part, in an air-raid shelter, and was actually a stage hit while the war was still going on, so I'm making an exception.  I suspect I'll end up writing about both before too long.

Finally, a generous friend of this blog recently offered me Susan Tweedsmuir's The Lilac and the Rose, a memoir from 1952.  Of course, I gleefully accepted.  Tweedsmuir is an interesting writer, whose 1957 novel Cousin Harriet is a memorable tale of a Victorian woman's efforts to help her single, pregnant cousin (and deserves to be reprinted).  Sadly, however, information about Tweedsmuir is not readily available and neither are her books, so I'm thrilled to have a chance to read one of her memoirs and learn more about her.  Not only that, but the book has a photo of the author—something I've never come across before: 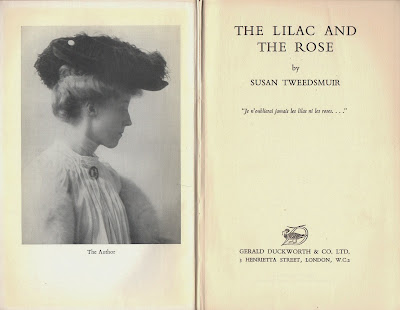 Clearly I have plenty to read in the next couple of weeks.  And the book budget surplus is a thing of the past…  Just obeying the laws of physics!
Posted by Furrowed Middlebrow at 3:01 PM