"It is very awkward to feel you have driven someone to her death": IVY COMPTON-BURNETT, Daughters and Sons (1937) 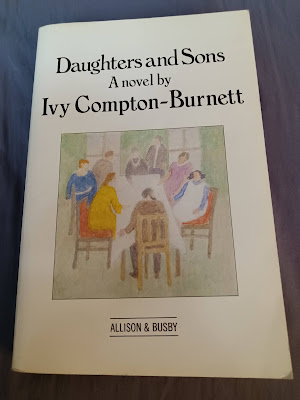 "I think it is such a good idea to give a dinner, when you have been supposed to be dead," said Miss Marcon to her brother, as they walked up the Ponsonbys' drive. "It takes away the general sense of guilt. It is very awkward to feel you have driven someone to her death, and going to dinner with her is especially different."

Oh my oh my. I know that Ivy Compton-Burnett is not everyone's cup of tea, but if I were going to urge a reluctant ICB reader to sample just one of her novels, here is the one I would choose. I picked it up (along with another ICB, A God and His Gifts, which I'm looking forward to soon) for the ridiculous price of $2.50 at Second Story Books in Rockville, Maryland (near DC) on our recent trip (there were a couple of other ICBs I already had, if anyone else wants to make the pilgrimage to Rockville), and spent every possible second of our resting time in the hotel with it firmly grasped in my hot little hands.

The Allison & Busby edition I read describes this as "one of the lightest and most comic of her novels", which I believe is indeed true, but of course one must factor in that this is Dame Ivy we're talking about, so it's still marvelously dark and cynical, with deliriously tyrannical adults and gloriously subversive young 'uns. The Ponsonbys are a classic ICB family, ruled over by 85-year-old Sabine, who could give the Wicked Witch of the West a run for her money:

Sabine never spoke against her daughter-in-law, though she was incapable of seeing her the fitting mate for her son, and had no scruple in speaking evil of the dead or evil of a mother to her children, indeed seldom spoke anything but evil of any human being.

Sabine is ably assisted by the widowed John, her egomaniacal novelist son (whose career and financial situation are in considerable decline) and Hetta, her daughter who just might outdo her mother for sheer self-absorbed malevolence. And there's John's poor children, some now in their twenties but still treated like infants. 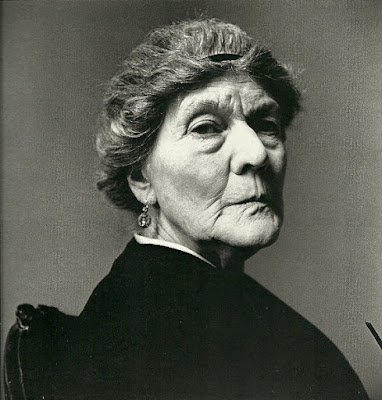 ICB fans will be more or less acquainted with the kinds of conversations and events that fill the novel, but there are a couple of particularly striking things that I loved here. Foremost is the fact that Dame Ivy gives us not one but two women writers as characters--one John's daughter France, who must hide that she's written a successful novel to protect his fragile ego, and one a family friend, Charity Marcon, a biographer whose description of her writing process is rather unforgettable:

"I have been up to London to get the book I am writing, out of the British Museum. I have got a lot of it out, and I shall go again presently to get some more; and when I have got it all, there will be another book." She slung a strap of notebooks off her arm, and advanced to the fire with the smooth, unswaying motion of a figure drawn on wheels. "So many people were there, getting out their books. It doesn't seem to matter everything's being in books already: I don't mind it at all. There are attendants there on purpose to bring it to you. That is how books are made, and it is difficult to think of any other way."

Is this perhaps ICB's version of the famous quote to the effect that scholars are just a library's means of reproduction?

We also get to meet no fewer than three more or less unfortunate governesses here--one perhaps more unfortunate than the others in winding up married to her employer. Although they don't all feature with equal prominence, the point gets made about the positions of these poor women. Jane Eyre never faced anything quite like the Ponsonbys. 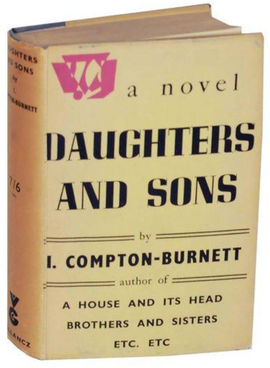 One of the most fascinating things about ICB (and yes, I do really need to read the bio of her to find out more about this) is how she was so driven to spend her entire career writing and re-writing these wonderful subversions of Victorian familial tyranny. It would be very hard indeed to sympathize with most of her tyrants, as many writers would be tempted to make us do--they really are deserving of all they get, while the young characters are allowed to be charming and likable even in their oppression. And yet, it does make me wonder if a part of the message (intended or not) of Dame Ivy's novels is that we might wonder if Sabine and John and Hetta weren't similarly subversive and hopeful before being beaten down by their own tyrants. Must read more about her soon, to get a better sense of the tyrants in her own life (who clearly seemed to have failed in beating her down)!
Posted by Furrowed Middlebrow at 8:02 AM